Walt Disney World transportation — we often love to hate it and hate to love it!

There are lots of ways to get around Disney World, and some resorts have an easier time with transportation than others. Let’s take a look at just how ALL the Disney resorts stack up to one another based on their transportation options!

Here are the Disney World hotels ranked by their transportation options!

The worst resort for transportation goes to Coronado Springs for its limited option of bus-only transportation. Plus, it’s got the pitfall of internal stops.

Similarly, all three All-Star Resorts have access only to bus transportation. There are no internal stops, but these resorts have a lot of rooms which can mean a lot of guests trying to ride at the same time. Plus, they often share buses, which can make for longer waits.

Animal Kingdom Lodge is far from everything and the final option that leaves guests with buses as the only way to head out of the resort.

Saratoga Springs may have internal stops and be mostly limited to bus transportation, but it edges ahead for the walking path to Disney Springs.

Similarly, Old Key West has internal stops and majority bus transportation, too, but you can snag a boat to Disney Springs. Plus, it has fewer internal stops.

Next up, the Port Orleans Resorts have fewer internal stops and a boat option to Disney Springs, too. The rest of the routes will be buses. Of the two, French Quarter might get an edge for (sometimes) having its own dedicated bus. 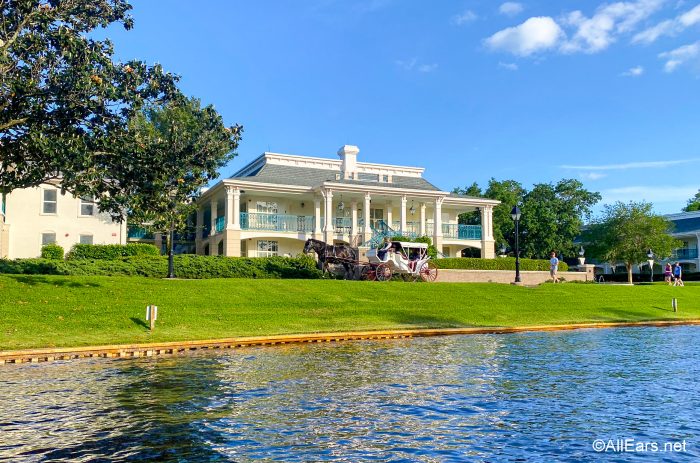 Fort Wilderness has a few internal stops and primarily bus transportation, but it has a boat directly to Magic Kingdom, too.

Caribbean Beach Resort might have the most internal stops of any hotel (seven in total!), but it also has access to the Skyliner (and serves as the hub for the three Skyliner lines) to get to Disney’s Hollywood Studios and EPCOT. The rest of the transportation relies on that bus.

Wilderness Lodge is primarily bus, but it does have access to a boat to Magic Kingdom. Boat to the park beats boat to Disney Springs!

Art of Animation and Pop Century share a Skyliner station that can get busy —  but not as busy as the gondola system’s hub at Caribbean Beach. Buses pick up the other routes.

Riviera Resort has the least busy Skyliner station of the three resort stations. Otherwise, we’re still heavily relying on the bus in our top seven.

Tied for first through third, the EPCOT-area resorts take the cake. Beach Club, Yacht Club, and BoardWalk Inn all have walking paths to EPCOT and Hollywood Studios, Skyliner access from EPCOT, and boats to both nearby parks. If you had an EPCOT entry, you could even pass through to snag the monorail to Magic Kingdom. That’s a winner!

Do you agree with our ranking? Let us know in the comments!