Epcot is a favorite park for many guests at Walt Disney World, and World Showcase is a true showpiece of the Park. Each country in the Showcase has something special to offer us, like wine and cuisines from around the world and cute shops with unique merchandise.

Sometimes it seems like the World Showcase has more for adults, but there are plenty of fun things around the World for kids to do and see, too.

Here are some of our favorite things for children in the World Showcase.

There is better simple fun than some good old fashioned arts and crafts. Kidcot Fun Stops are special spots in every pavilion around the World Showcase where kids get to meet cast members from each country, hearing stories from their homes and enjoying a small art activity. This is a great free activity to do in Epcot. As you visit each country you collect stamps, at the end you have a fun free souvenir.

In DuckTales, Scrooge McDuck and his nephews travel the world, so they are a natural choice to show us around the World Showcase. This scavenger hunt is expected to take over for the Perry the Platypus game in Epcot (which previously replaced a Kim Possible game). The DuckTales Adventure is a part of the Disney Play app. Following clues and hints, you travel around the world and solve the mysteries with the DuckTales gang and catch a few villains along the way.

One of our favorite attractions in World Showcase is the Gran Fiesta Tour starring The Three Caballeros in the Mexico Pavilion. The Three Caballeros are a musical trio made up of Donald Duck, Panchito, and José, and guests follow along with their silliness on a slow boat ride. Donald gets separated from the other two, so Panchito and José search Mexico for him. The ride is full of colorful scenes and catchy music. If you aren’t singing the song when you get off, just get back on and do it again; there is rarely a wait.

Okay, so maybe we don’t have to tell you that your kid will love the Frozen Ever After attraction in the Norway Pavilion. This slow boat ride through Arendelle is full of all the main characters from the first movie. In case you didn’t already know, Frozen Ever After always has a long wait. If you are planning on going on this one, you will either need a FastPass or be willing to wait in line for at least an hour (sometimes two or more!). 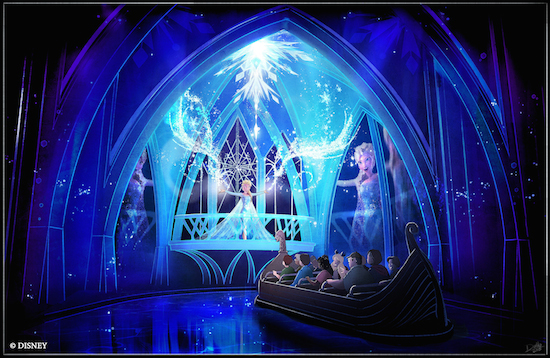 One of the best shops in the World Showcase for kids is the Mitsukoshi shop in the Japan Pavilion. There is an extensive collection of anime and manga merchandise, if your children like things like Pokemon and Dragon Ball Z. The shop also has an interesting selection of Japanese snacks. If you have adventurous eaters in your party, it is definitely worth picking up a few Japanese treats. But it’s not just the shopping that makes the Japan pavilion a must do for families, there is a cultural exhibit called Kawaii: Japan’s Cute Culture. This exhibit explores the phenomenon of cute characters in Japan.

Throughout the World Showcase there are live performances in almost every pavilion. In the Canada pavilion there are five different bands that play different genres of music. In the Mexico pavilion there is a mariachi band, and in the past they have played some music from the Pixar film Coco (sometimes with a puppet of Miguel). Next door in the China pavilion you can catch the Jeweled Dragon Acrobats perform feats of agility, balance, and strength. The American Adventure pavilion features a group of singers named the Voices of Liberty. Make sure to check the daily Times Guide or your My Disney Experience app to check showtimes.

One of our favorite things about the World Showcase is seeing characters from the different countries in their native lands. You can meet Anna and Elsa in Norway, Belle and Aurora in France, Snow White in Germany, and Mulan in China. It feels even more real to meet them in their home country. It also makes for some more interesting backdrops in character photos.

The World Showcase is unlike any other part of Disney World. We can never get enough of it. We recommend spending at least a full day there and sometimes even two.

What is your favorite part of the World Showcase? Let us know in the comments.

Travel the World Showcase at the links below!

We Found the Most Photogenic Couple in Disney World

Only the BIGGEST Disney Fans Will Know Who is on These New Cast Member Costumes!

Traveling to Disney World in 2021? These Hotels May Still Be Closed!