A new exhibit has opened at Epcot‘s Morocco pavilion that celebrates two of that nation’s most extreme competitions. The exhibit is called Race Against the Sun, and despite its solar theme, it’s very cool.

Located in the Gallery of Arts and History just off of Morocco’s main plaza, Epcot’s latest edition replaces Moroccan Style: The Art of Personal Adornment. The new exhibit covers the nation’s history with the desert and covers everything from tribal traditions to off-road rally races.

The first part of the exhibit is called Culture of the Desert: Thriving in the Sahara and deals with the Berber (or Amahzigh) people who have lived in the Sahara since antiquity.

Here you can learn how they maintained their nomadic lifestyles in one of Earth’s most inhospitable environments.

And the display demonstrates what a traditional tent might include from pots and pans to a tea tray and woven rugs.

Next, visitors can learn how those traditions have evolved into one of the world’s most extreme footraces: the Marathon des Sabels (Marathon of the Sands).

If you thought training for runDisney was tough, it’s got nothing on this. The Marathon of the Sands is a six-day run through the Sahara that covers legs of 19 to 52 miles each!

Displays for Marathon of the Sands share some of the gear required for such a feat.

Perspiration? We’re guessing a 150+ mile run through the desert is likely to work up a sweat!

This display shows how grueling all this gear can be for a runner in the Marathon of the Sands.

The display also features stories about previous participants so you can learn how they use techniques both new and old to beat the desert heat overcome incredible obstacles.

The Marathon of the Sands exhibit also showcases the Winner’s Trophy!

Fans of off-road racing can learn about the Rallye Aïcha des Gazelles du Maroc (Rally of the Gazelles); a 2,500 kilometer, all-women rally race through the desert.

Displays show the uniform and equipment needed for the Rally.

There are photos and stories about women who have competed in this grueling race, too.

Don’t miss the chance to take your own race photo at this immersive diorama that represents the view of a Rally racer!

And if all of that desert trekking (learning) has worked up an appetite, you can learn about the food that fuels these amazing adventurers. 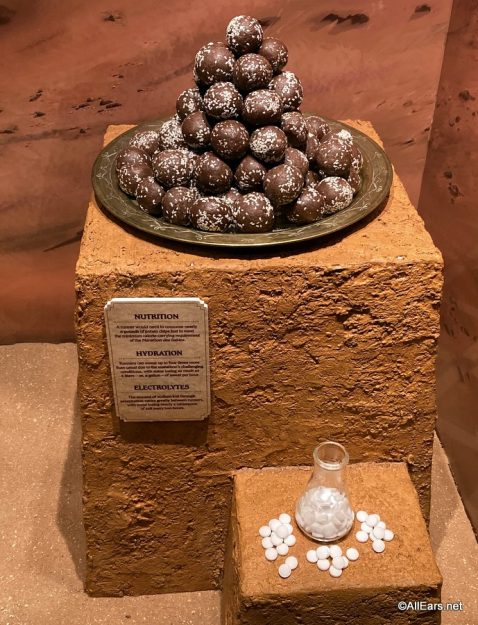 This new exhibit is a great addition to World Showcase, where the opportunity to learn about new cultures and traditions is a big part of the draw. Don’t miss it!

Have you had a chance to visit this new attraction? Looking forward to checking it out? Let us know your thoughts in the comments below!