As you enter World Showcase from Future World, The American Adventure is directly across the Lagoon. It is the centermost pavilion in the World Showcase and is flanked by Italy on the east and Japan on the west. It is actually the southernmost point of Epcot. 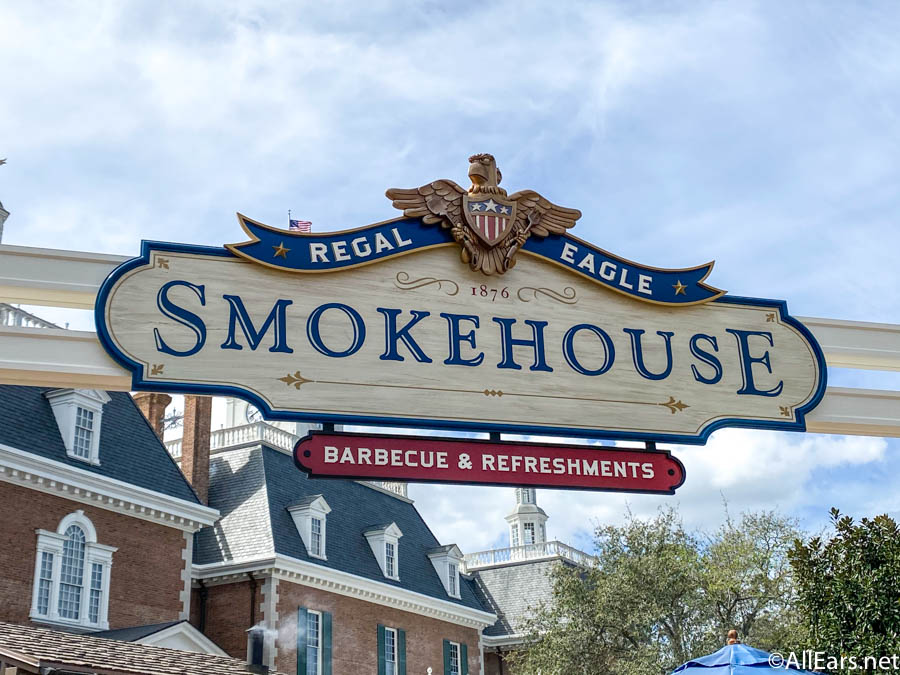 The architecture of the building is done in classic English Georgian style. Elements in the Disney building were inspired by Independence Hall, Boston’s Old State House, Monticello, and Colonial Williamsburg. The structure’s 110,000 bricks are handmade from Georgian clay, which were then colored and aged to make them look authentic. The roof is made of slate, and the floor of marble and copper. 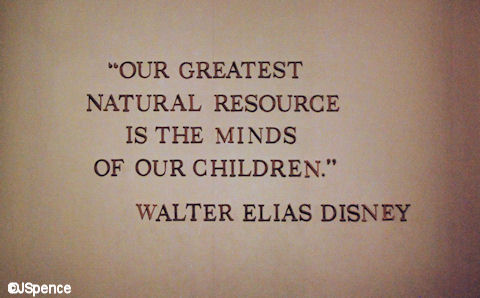 As you leave the main lobby and proceed into the theater, you must ride escalators or hike a set of stairs through the Hall of Flags. Above you is hung a collection of the flags that have flown over the United States in all of its forms. It includes Revolutionary War flags, colonial flags, and foreign flags that once had claim to the land. There are 44 flags in all. 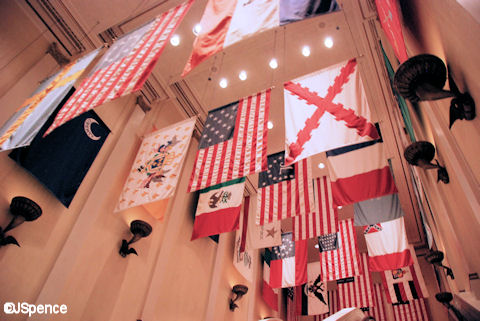 While waiting for the next showing of American Adventure, you may enjoy the a capella performance of the Voices of Liberty. This group is worth stopping in for, even if you’re not going to watch the show. 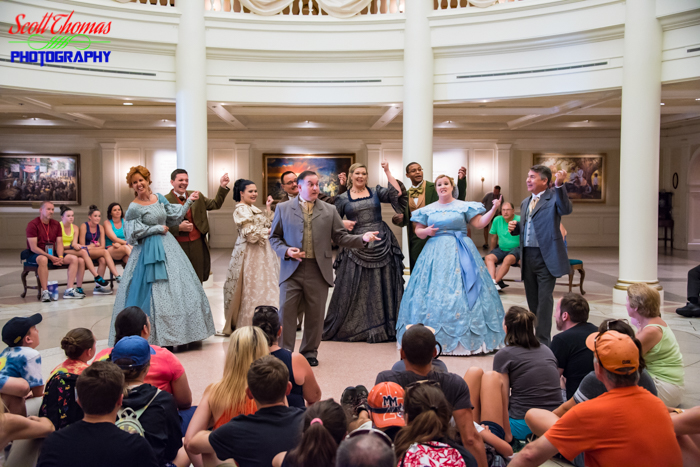 Once it is time for you to move into the theater, you will be directed from the main hall to escalators and a stairway. Upstairs, just follow everyone into the theater. You sit for the entire show. All seats are good seats. The screen is 72 feet wide! 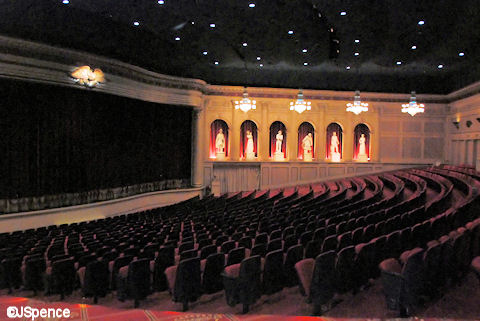 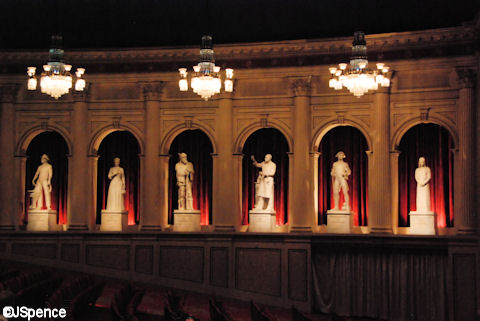 The presentation features Audio-Animatronic figures, filmed images, moving sets, and sound and lighting effects. The 30-minute show highlights notable events and great personalities in American History. It is in no way complete. 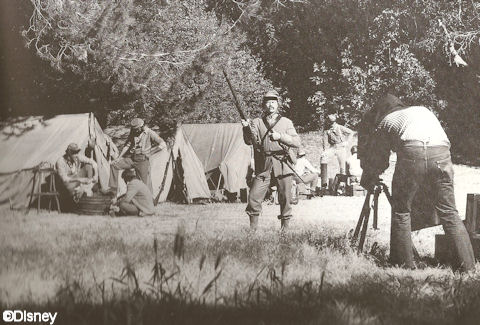 Benjamin Franklin and Mark Twain are your hosts for the journey through The American Adventure. 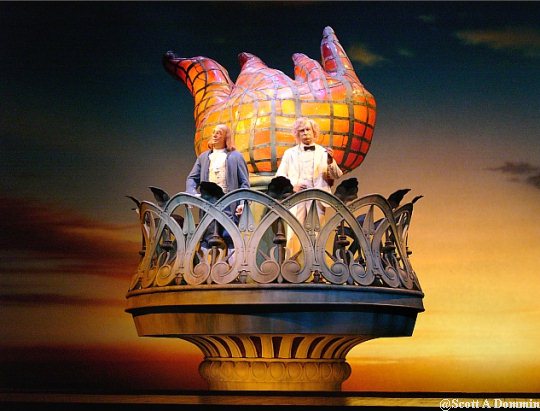 Scenes include: the Pilgrims and the Mayflower; the Boston Tea Party; the writing of the Declaration of Independence; Valley Forge and the Revolutionary War; slavery and the Civil War; the suffering of Native Americans; the Philadelphia Centennial Exposition; the founding of Yosemite National Park; World Wars I and II; and a series of images depicting the people and events of recent history. 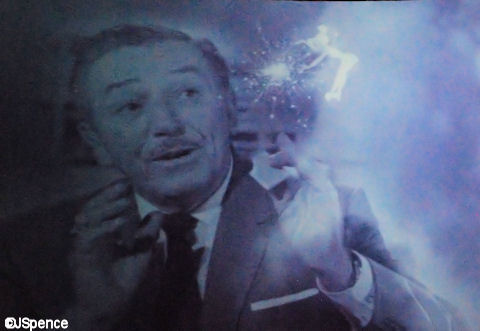 This gallery reopened July 27, 2018, with a new art exhibition called “Creating Tradition: Innovation and Change in American Indian Art.” The exhibition features 89 pieces of art that represent 40 different American Indian tribes from seven geographic regions across the United States. Among the items displayed are both the work of contemporary Native artists alongside artifacts from centuries past. 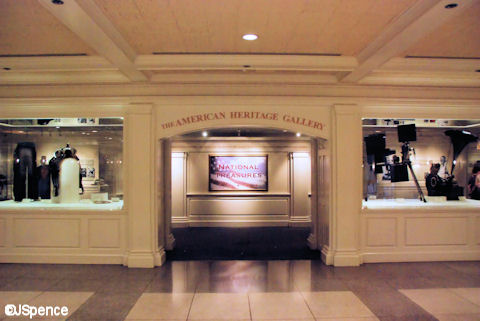 During the next five years, the exhibition will feature new artifacts and refreshed displays, incorporating pieces from more of the 573 American Indian tribes recognized by the United States Bureau of Indian Affairs. As with other exhibitions that have graced the American Heritage Gallery, this new exhibition features interactive elements, where some of the artists share the creative process and inspirations behind their works in their own words.

Directly across from the American Adventure building this theater hosts live stage shows and concerts in Epcot. 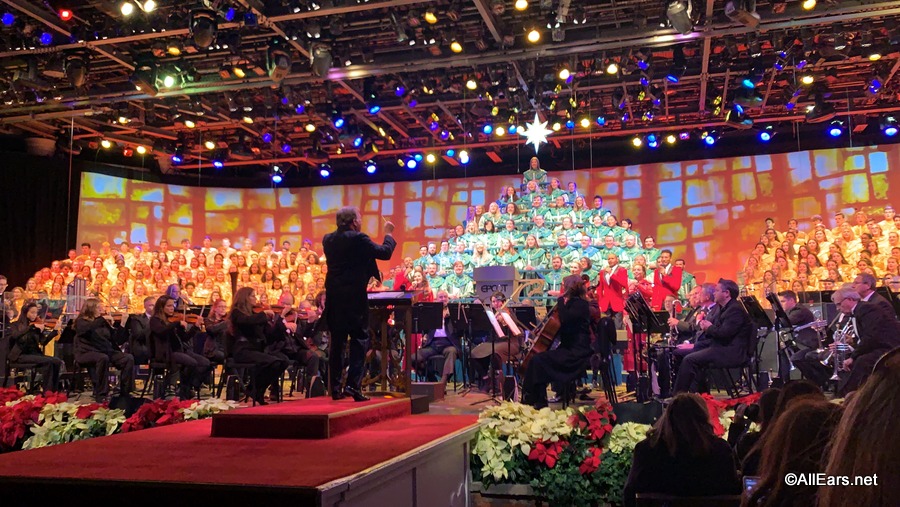 Get more info about Epcot Attractions At A Glance!

Regal Eagle Smokehouse: Craft Drafts & Barbecue – This new barbecue joint opened in early-2020 and features the Muppet Sam Eagle as host! The backstory is that Sam is hosting a barbecue competition, so guests dining here will find barbecue inspired by four different regions of the United States. 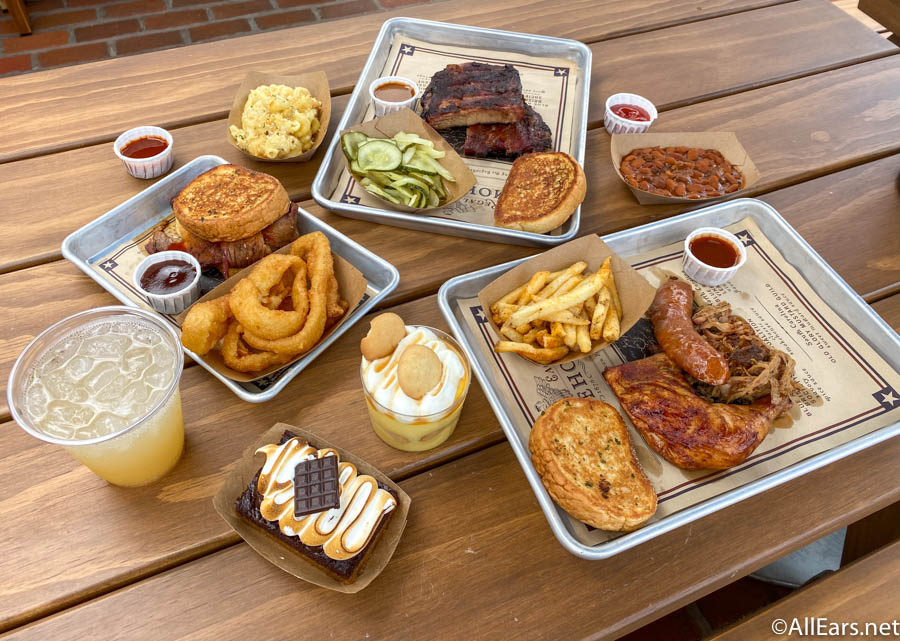 Funnel Cakes – For those seeking a fried dough treat don’t miss the Funnel Cake kiosk to the right of the American Adventure Pavilion. 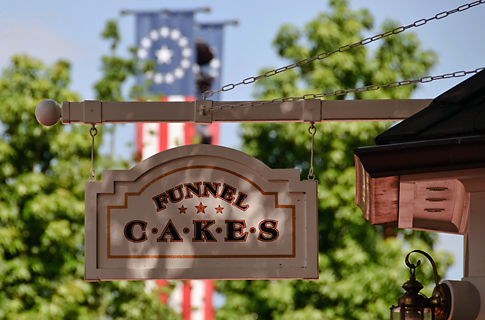 Many concerts take place in the America Gardens Theatre (see description above).

Take a nice 15-minute break, sit on the cool floor just inside the main doors and enjoy the Voices of Liberty. They sing at specific times throughout the day.

Take a look at the Clock Face. You will see a numeral IIII, instead of the IV. This was done to prevent confusion when viewing the clock from a distance. 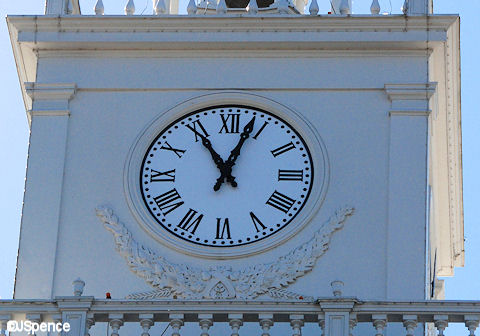 The Epcot International Festival of the Holidays features storytellers in each country. During Kwanzaa and Hanukkah there are special related exhibits in the American Adventure Rotunda, in addition to the storytelling Santa Claus for Christmas. 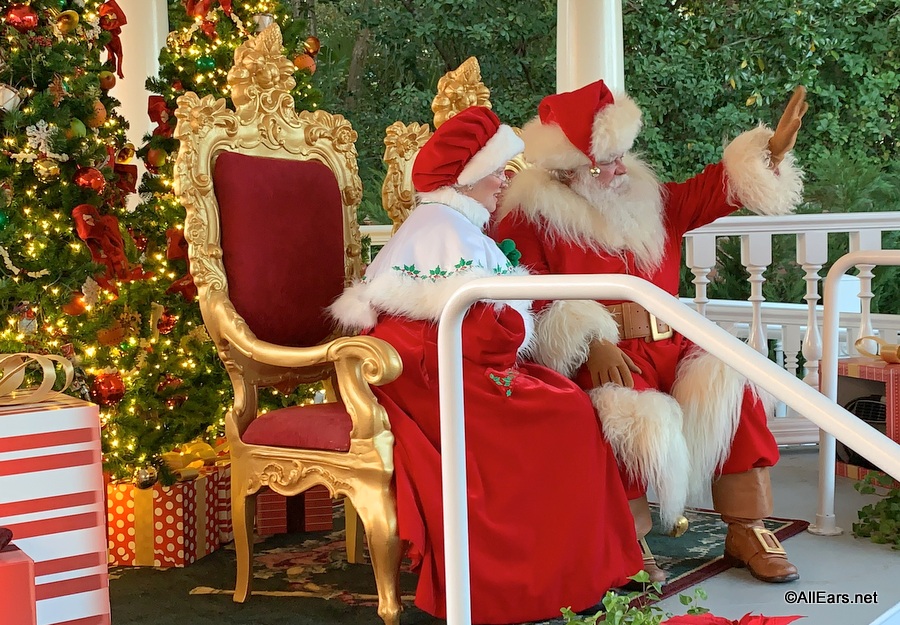 Also during the holidays, the American Adventure is home gingerbread American icons like the Washington Monument and the Capitol Building. 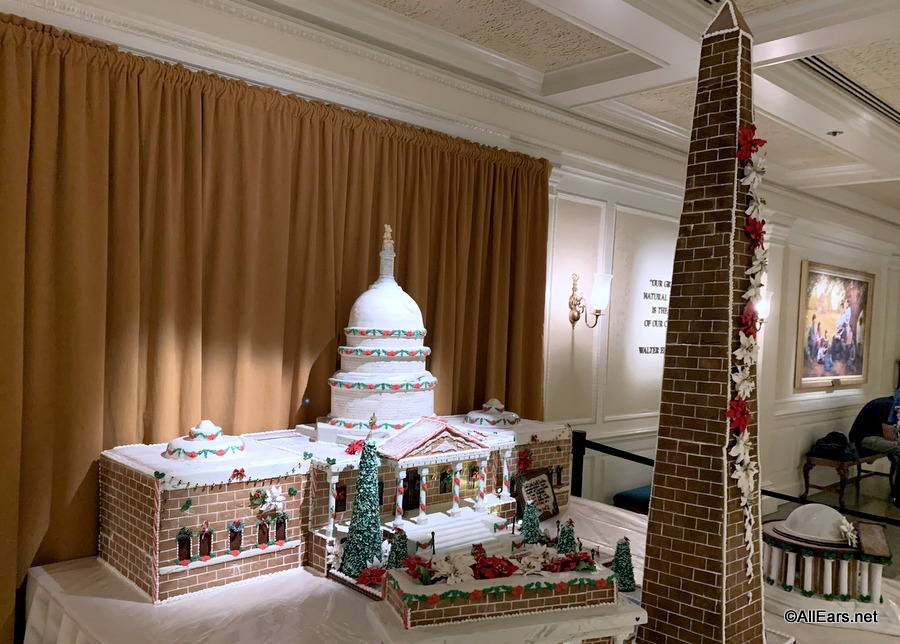 Wheelchair guests should check with the Cast Member upon entering the main hall. There is an elevator that will take you and your party up to the level where the theater is located.

Seating is conventional theater seating. Wheelchair areas are in the back of the theater.

At the American Adventure, the “seating” for the ECVs was extremely hazardous. We were in the back row of the theater. The CM has us pull down to the last available inch and then “nose in” to the seats in front of us so we could fit more ECVs. There is virtually no room there to maneuver. We were all trapped and it took quite some time to get us out. Several companions to those of us on wheels had to come and lift the ECVs to turn them around. (Beth Christie)

Assistive Listening Devices from Guest Services Can Be Used at the American Adventure and the America Gardens Theatre.

Ears to the World, show translators that are available for guests with limited English fluency, may be used at this attraction. Guests may choose from one of the five Walt Disney World Resort key languages: French, German, Japanese, Portuguese and Spanish. Ask a Cast Member about availability.

Santa and Mrs. Claus appear here during the holidays.

Epcot Characters At A Glance
Character Meet and Greet FAQ

Art of Disney – This shop was previously located near the Park’s front entrance. It moved to this location in 2019 as part of Epcot’s transformation. Artwork here runs the gamot from traditional to contemporary. Find souvenirs, prints, and more. 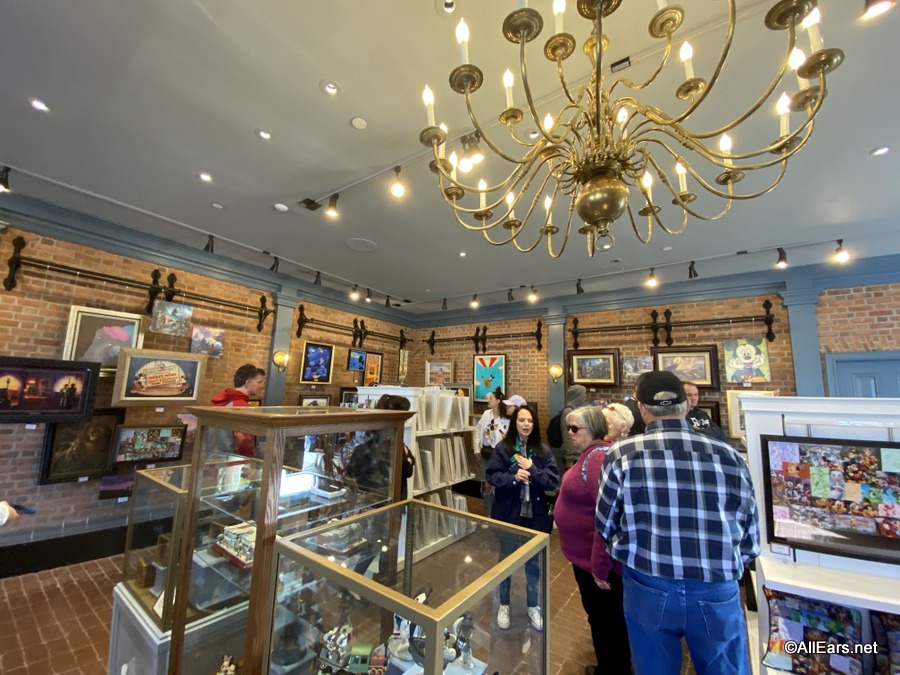 Pin Cart – If the pin trading craze has gotten you, here’s another place in Epcot where you can see a wide variety of pins for purchase.

When the decision was made to turn Walt Disney’s city of Epcot into the theme park of Epcot Center, World Showcase was to have been the main park component. Plans for the showcase had all pavilions located within one semicircular building. When the plans changed to the present World Showcase Lagoon design, Imagineers did not even place the United States with the other pavilions. It was to be a two-story structure on stilts, between World Showcase and Future World. The attraction would be housed in the second story, and the first story would be used as a sort of tunneled gateway to World Showcase. Finally, it was decided to move the United States pavilion not only into the Showcase, but also into the center-most position across the lagoon, so that The American Adventure would play host to all the countries that surround it.

As the Host Nation and the centerpiece of World Showcase, The American Adventure is built at a slightly higher elevation than the surrounding pavilions. The landscaping here is the most structured of all the countries represented. The symmetrical planting and all-American plant material give it a feeling of Philadelphia formality. 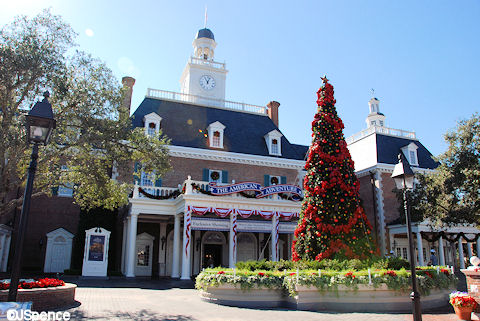 Original plans for the attraction called for three hosts, one representing each century during which the United States has existed. Franklin was chosen as representative of the 18th century, and Twain for the 19th century. After suggesting possible figures, such as Will Rogers and Walter Cronkite, it was decided that guests were too familiar with the 20th century to easily be represented by one person. It was decided to execute the show with only two hosts. 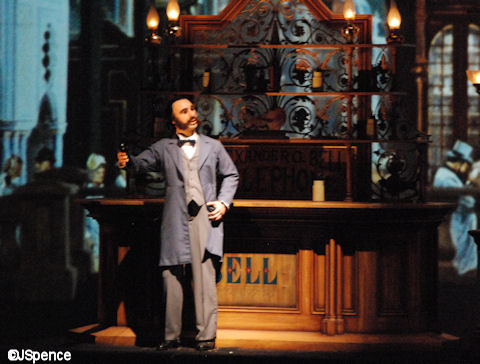 People ask if Benjamin Franklin really walks up the stairs into Thomas Jefferson’s study. The Audio-Animatronic figure is actually incrementally lifted into place one step at a time. Placed next to stairway railings, this gives the illusion of a man walking up a flight of stairs.

There are so many figures and changes in the show that Disney uses something called “the war wagon,” a movable device under the theater, measuring 65-by-35-by-14 feet and weighing 175 tons. Ten different sets are stored on the device, and then moved forward or backward when needed. It is all computer-controlled.

Here are some of the songs heard during the presentation:

To date, only “Golden Dream” has been released on CD and digital.

The attraction was updated once again in June 2007, when the last 45 seconds of the film montage was updated.

The attraction was updated most recently in February 2018. The film montage was again updated. Among those absent in this latest version are Tiger Woods, Lance Armstrong, Willie Nelson, Peter Jennings, Michelle Kwan and the Comic Relief crew of Whoopi Goldberg, Robin Williams, and Billy Crystal. Among the 2018 additions: Barack and Michelle Obama, Madonna, Beyonce, Mark Zuckerberg, Elon Musk, Neil DeGrasse Tyson, SpaceX Dragon, Mars Rover, Bill and Melinda Gates, Quincy Jones, Michael Phelps, Serena and Venus Williams, LeBron James, and the gold-medal winning U.S. gymnastics “Final Five” team from 2016 among others. There were other subtler changes including changing a headline from “Japs Surrender” to “War Over” and the firemen raising the flag after 9/11 with the flag now in tinted color. The theme song “Golden Dreams” was also re-recorded with new orchestration.

The Kinsey Collection, a previous exhibit in the gallery, closed in late March 2018.

The Spirit of America Fife and Drum Corps (above) was retired at the end of September 2014. They performed patriotic songs and songs of the colonial era.