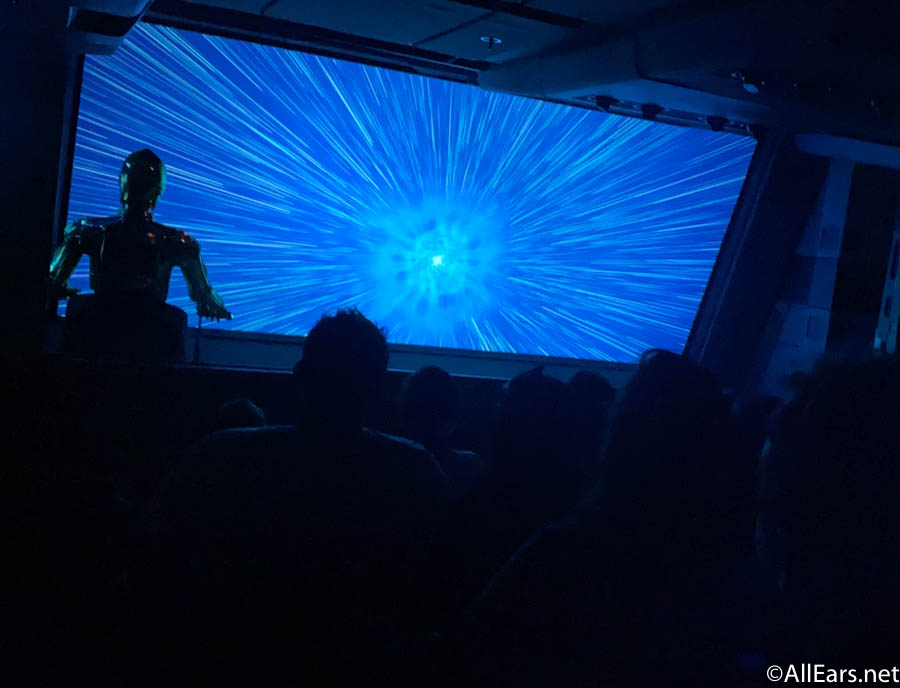 This flight simulator ride was inspired by the popular Star Wars movies. It’s situated on the far left of Disney’s Hollywood Studios, beyond Echo Lake.

The new StarSpeeder 1000 takes passengers to a variety of different planets in the Star Wars universe, where they will experience several different adventures on a motion-simulated space flight — all in 3D! With more than 60 different combinations, guests can have a new experience with every flight. 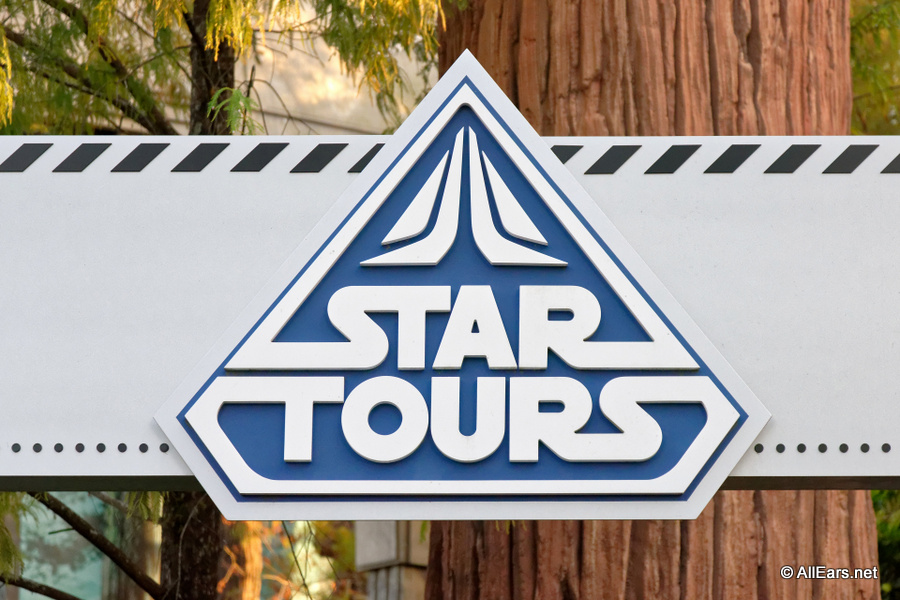 Star Tours – The Adventures Continue is an updated version of the original Star Tours attraction which opened in 1989 and closed for refurbishment in the summer of 2010.

While the original attraction featured only one destination (Endor) and one flight experience, the new version takes travelers to several different locations — and frequent flyers will find that it’s rarely the same three places! In fact, there are more than 60 different experiences with destinations like Naboo, Tatooine, Hoth, Kashyyk and Coruscant. All of the film footage is new and was filmed in digital 3D, giving it additional depth and realism. Often, when new films are added to the Star Wars franchise, new scenes are added to Star Tours as well. 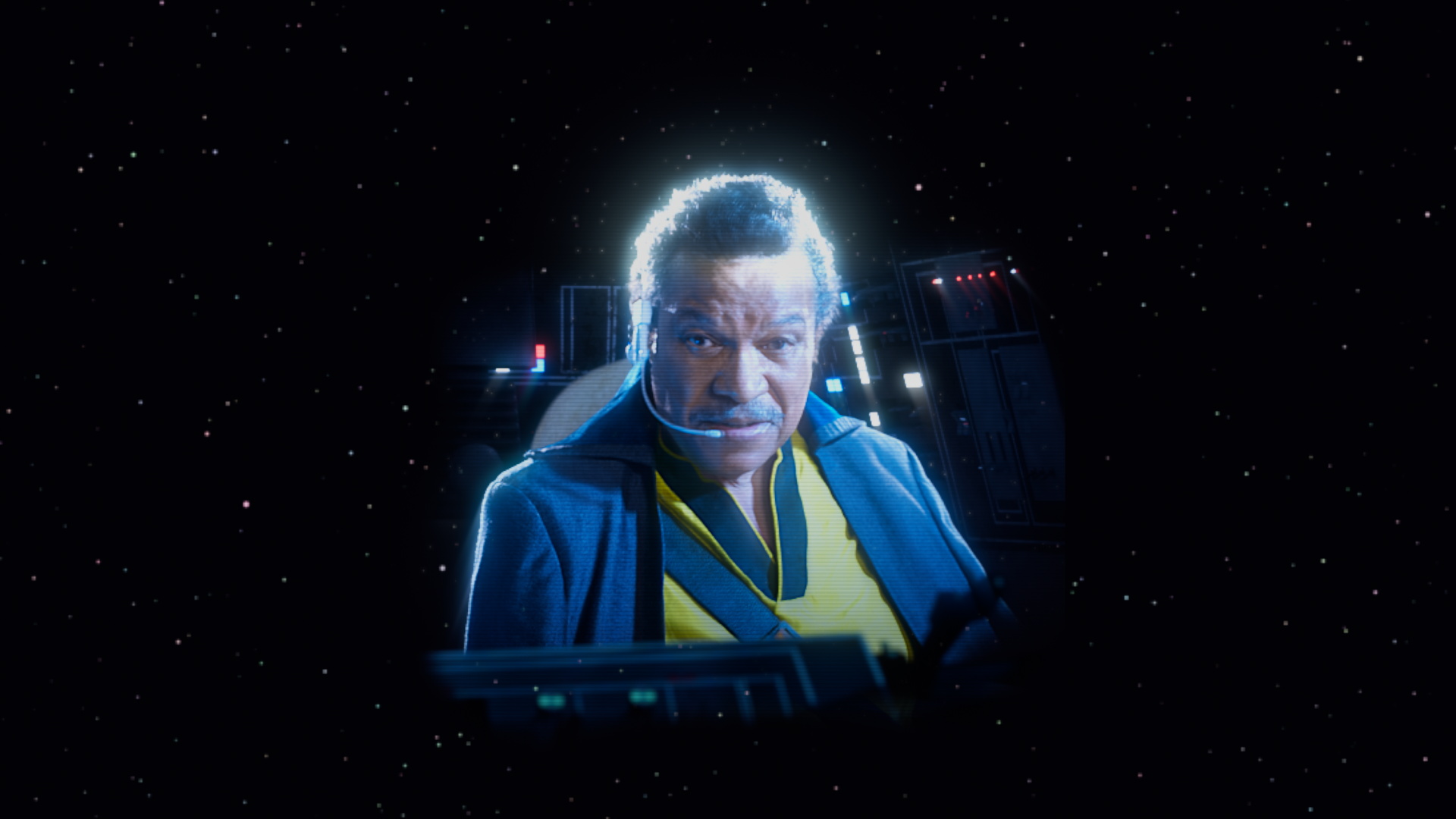 Queue: The queue winds through the terminal area of the Star Tours spaceport and will remind anyone who has ever traveled via air of the airport experience, complete with security scans and luggage screening. Large flight status displays on the walls list the arrivals, departures and destinations of upcoming flights. Audio-animatronic characters, including C-3PO and R2-D2, are engaged in various tasks like equipment maintenance while the G2-9T droid dutifully screens baggage. 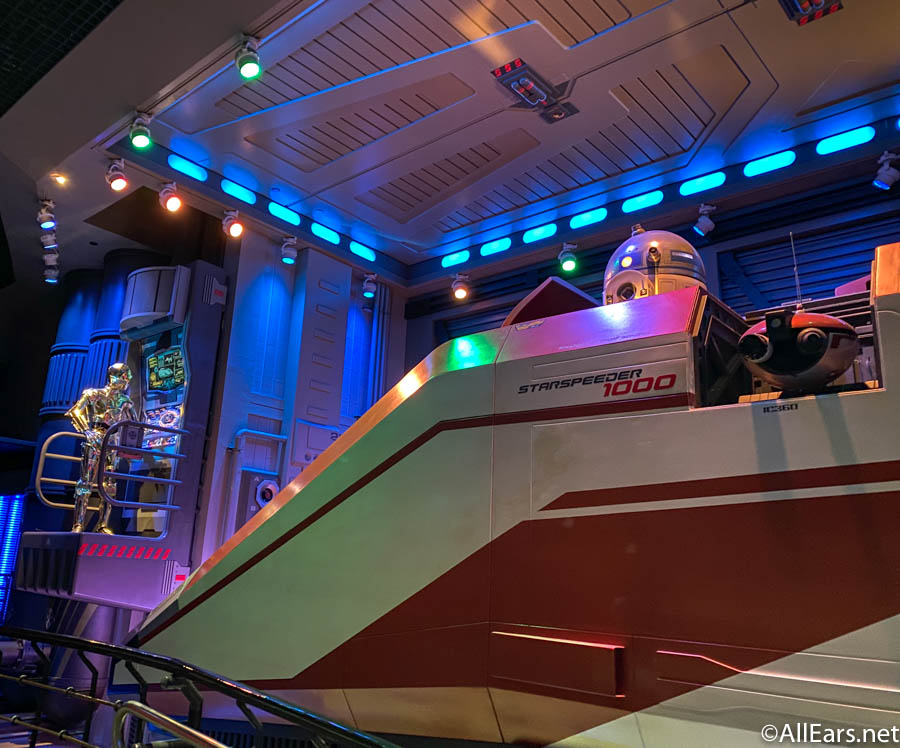 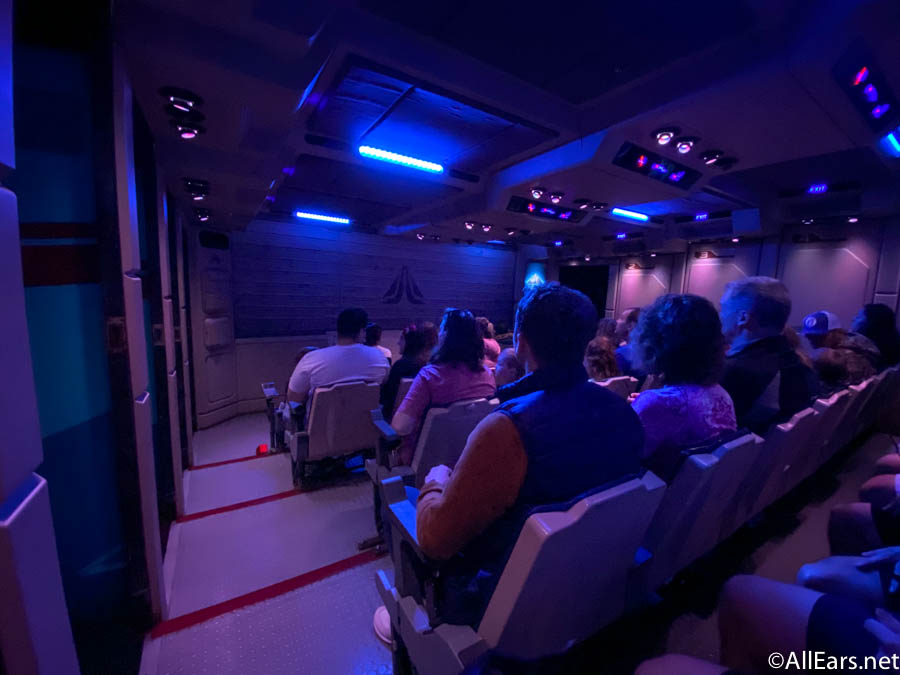 The Ride: Designed by teams from both Walt Disney Imagineering and George Lucas’ Industrial Light and Magic (ILM) and Lucasfilm Ltd., the 40-seat flight simulator combines motion with an action-packed 3D video to send passengers soaring into an unforgettable journey. C-3PO and R2-D2 are your droid pilots as the flight unexpectedly changes from a run-of-the-mill sightseeing trip to a perilous mission to protect a Rebel spy from the Galactic Empire.

The five-minute ride is full of thrills as it travels through hyperspace to its multiple destinations, which might include a pod race on Tatooine, a speeder pursuit on Kashyyk or an underwater submarine chase on Naboo.

The pilot eventually manages to return the Starspeeder and its passengers safely to a spaceport.

There are more than 60 different combinations of the film elements. Those include:

Star Wars characters you may encounter:

Learn more about Star Tours with this AllEars TV video!

Lightning Lane access for Star Tours-The Adventures Continue is available with the purchase of Genie+. The average standby waits typically range between 30 – 60 minutes. 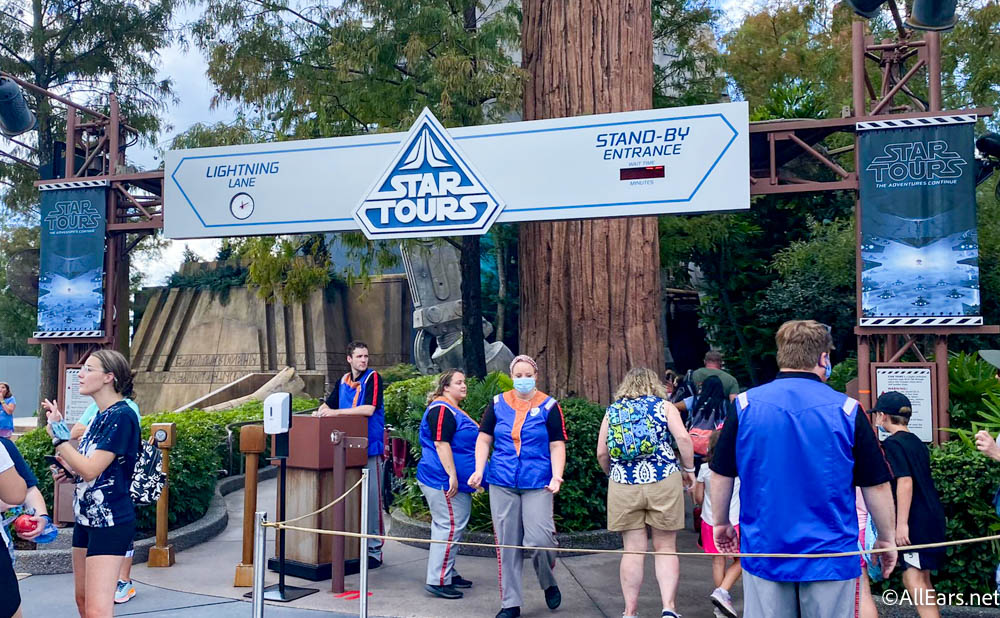 Height requirement: 40 inches (102 cm). Young children should be accompanied by an adult.

Warnings:  Because the motion simulator can be fairly rough, pregnant women and people with other medical considerations, including motion sickness, and back and neck problems, are advised not to ride Star Tours.

There is less motion in the middle of the vehicle near its center of gravity. Those wishing to experience the widest range of motion will find it in the back row, especially on the ends. Cast members will usually accommodate seating requests if possible.

There is a net bag under the seat to secure loose items during the flight. 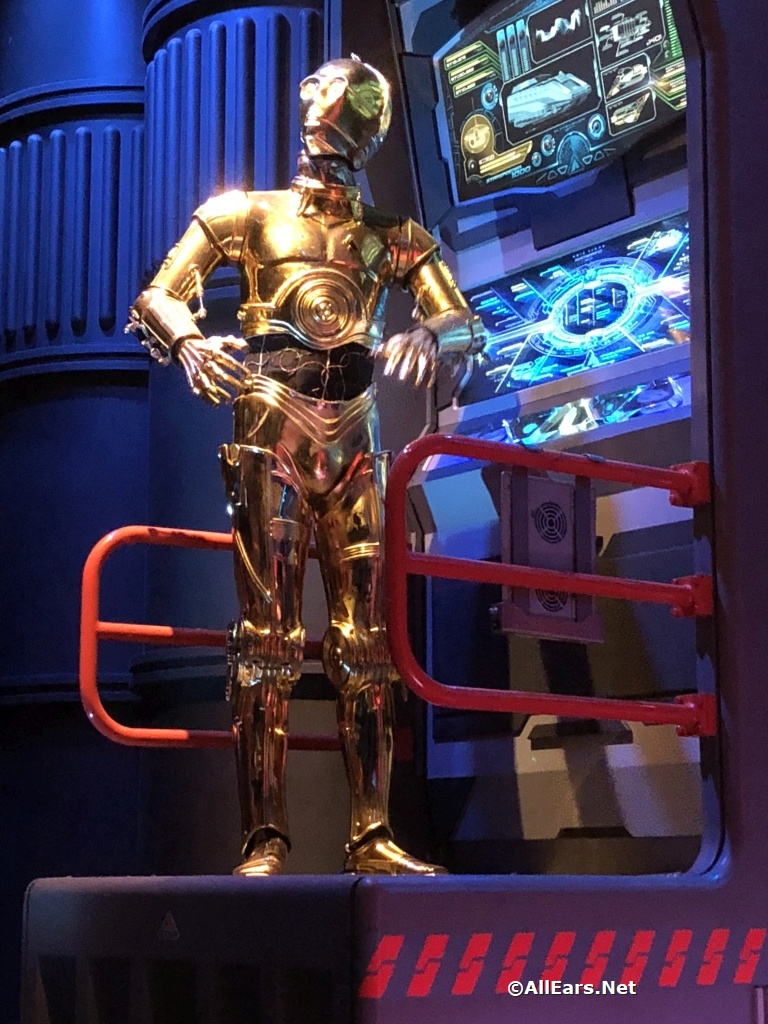 There is a gift shop located at the exit of Star Tours called Tatooine Traders, made to resemble the Mos Espa village in Star Wars Episode I: The Phantom Menace. The shop offers a variety of merchandise based on all of the Star Wars movies, including build-your-own lightsabers, t-shirts, action figures, LEGO kits, books, and posters. 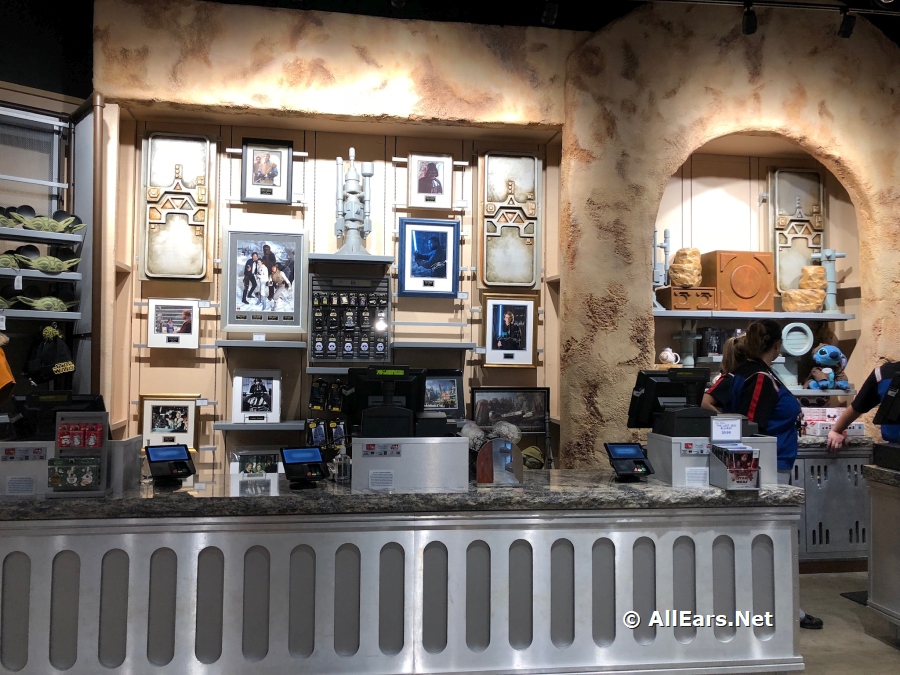 Scenes from the film Star Wars: The Force Awakens, The Last Jedi, and Rise of Skywalker have been added to the show scenes.

Star Wars fans will recognize the line “I’ve got a bad feeling about this.” This line has been used in all of the Star Wars films by various characters as part of a running gag.

The flight status displays in the queue alternate between the English and Aurebesh languages.

HIDDEN MICKEY ALERT: As you walk along the queue, you’ll notice a window that features silhouettes of familiar droids and other characters. Watch for the R2-D2 who reveals his Mickey ears!

Keep an eye out in the queue for a little tip of the hat to the former version of this attraction: The StarSpeeder 3000’s pilot, RX-24 or “REX”, can be found in a row of junked droids, marked as “defective.”

To learn more about Star Tours, and go inside the attraction, check out this AllEars TV video!