Rise of the Resistance is undoubtedly one of the most popular rides in Disney World right now.

Not only is it the most popular, but it’s also one of the most difficult attractions to be able to experience. In order to ride Rise of the Resistance, guests must snag a spot in a Boarding Group, which are in high demand. That’s not always the easiest thing to do, so we’re walking you through exactly how to do it!

Rise of the Resistance has received many changes recently, so, we’re here to give you an updated step-by-step guide to getting a Boarding Pass!

First and foremost, it’s important to note that there is currently no standby line for this attraction. Guests must obtain a spot in a Boarding Group for the ride.

The Boarding Group will allow you to virtually wait in line while exploring the rest of the park, and you’ll be called back when it’s your group’s time.

The My Disney Experience App is where you will have access to the Boarding Groups, so you’ll want to make sure you have the most updated version on your phone. You’ll be able to access the virtual queue if you have BOTH valid park admission AND a Park Pass for Disney’s Hollywood Studios on that day.

Currently, there are two distribution times for boarding groups. The first distribution time is at 7AM on the day of your park reservation for Hollywood Studios. You’ll have access to the boarding group system via the My Disney Experience App from OUTSIDE the park. Meaning, you can do it while eating breakfast or laying in bed at your resort.

Keep in mind that when Park Hopping returns on January 1st, only those with a Park Pass Reservation for Disney’s Hollywood Studios that day will have access to the boarding groups for Rise of the Resistance. So, if you plan to hop over to the park that day, you won’t be able to ride the attraction. 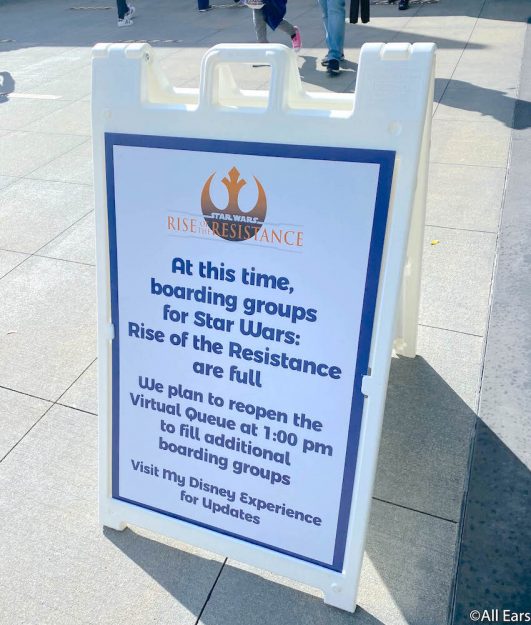 The My Disney Experience App will be your guide for this process. At the exact time that the boarding groups become available (7AM or 1PM), go to the home screen of the app, and scroll down to find Star Wars: Rise of the Resistance — Access with Virtual Queue.

On that screen, you’ll be able to press the “Join” option, which will put you in the Virtual Queue that will allow you to join a Boarding Group. You’ll be able to select additional riders from your Family & Friends list that also have valid admission and a Park Pass for Hollywood Studios that day.

Following this step, you’ll either be provided a Boarding Group number or be told that Boarding Groups have filled up. The app should also provide you with the estimated time you’ll have to wait until your group is called to ride the attraction.

The app will let you know when it’s time to report back to Rise of the Resistance and from there Cast Members will assist you.

And that’s all there is to it! Although it’s an easy and straightforward process, it can still be difficult getting a Boarding Group because they often disappear in SECONDS. So, be on time and definitely try for the 1PM time if you’re unsuccessful in the morning.

Check out our list of tips and tricks for your best shot at getting on this ride!

Many of Disney’s attractions have been undergoing changes and updates, and we’ll be sure to share them all with you, so be sure to check back with us!

Have you attempted to ride Rise of the Resistance? Share your experience with us in the comments!