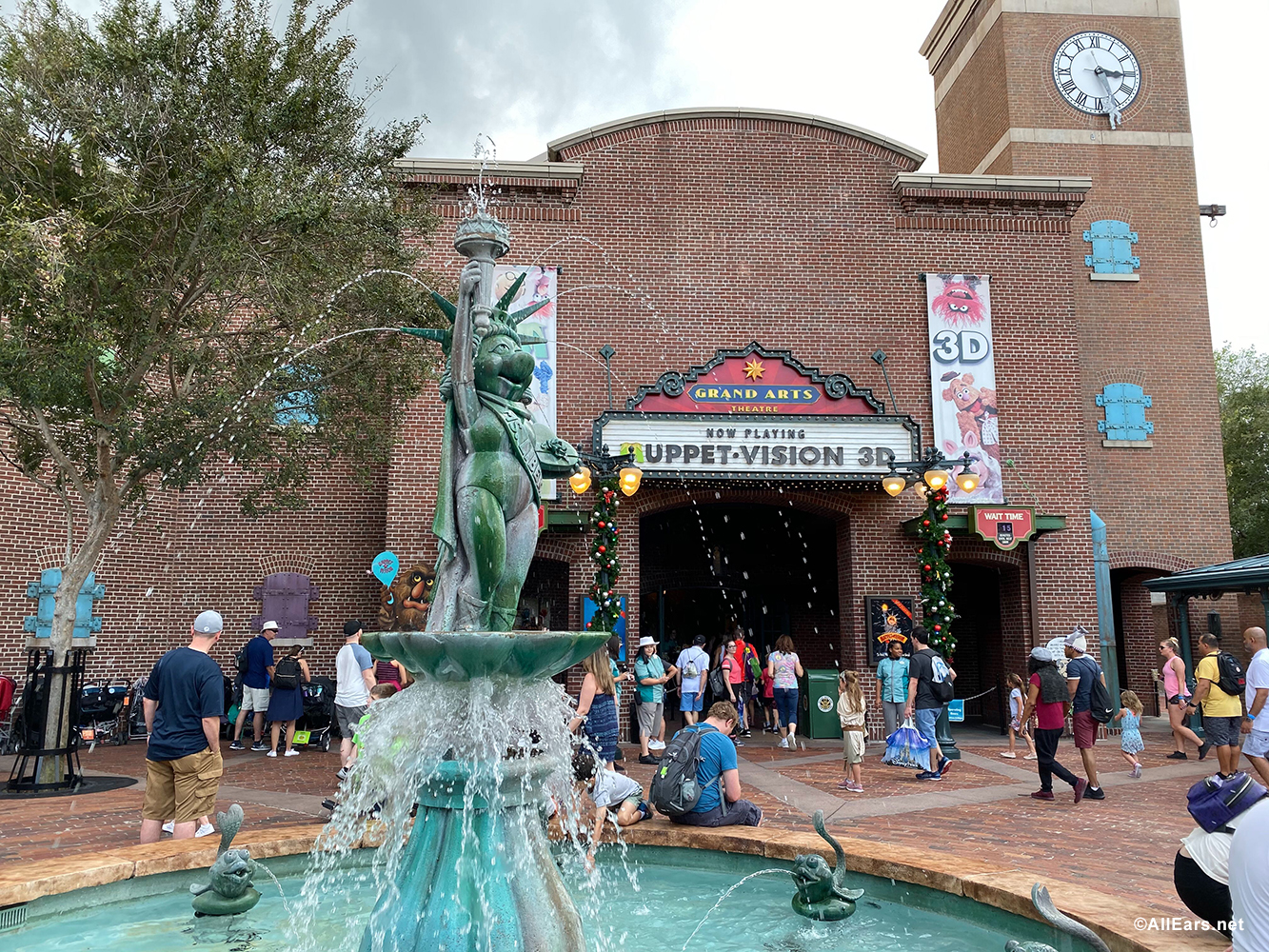 Zany humor and outlandish pranks are the order of the day as you join Miss Piggy, Kermit, Gonzo, Sam Eagle and many other familiar Muppet faces in the three-dimensional film, Muppet*Vision 3-D, located on Grand Avenue. 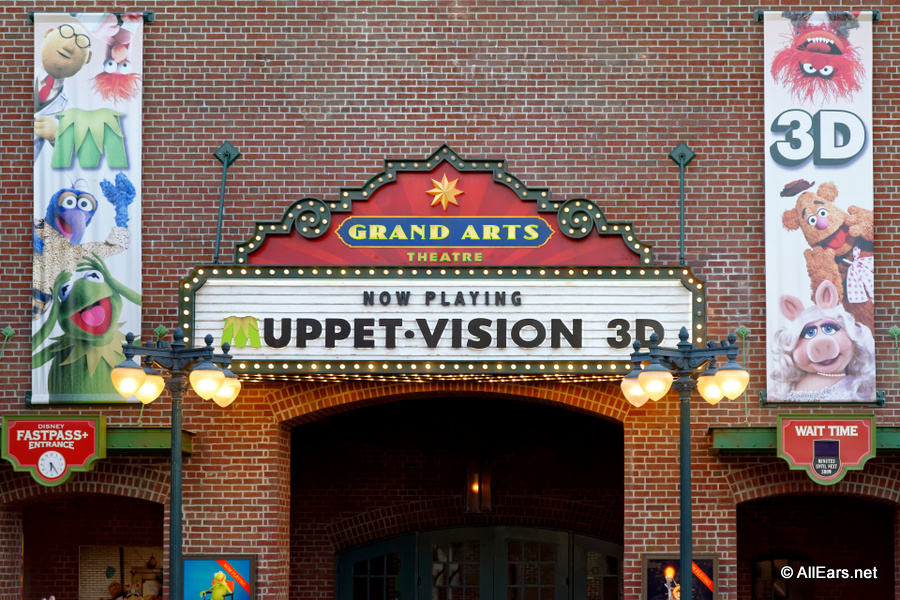 Pre-Show — Prior to the show, you’ll enter the Grand Arts Theatre’s “warehouse” to wait. Don’t forget to grab your 3-D glasses on the way in! A very funny 12-minute video on overhead monitors entertains you with typical Muppet musical mayhem. You’ll also have the opportunity to browse among prop boxes filled with goodies that belong to the Muppet stars. 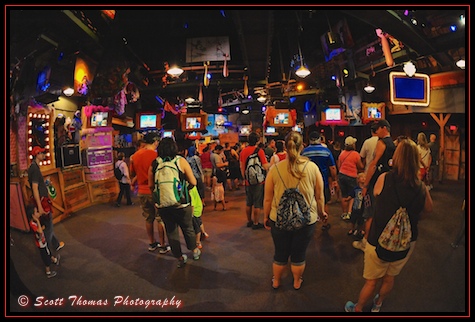 Muppet*Vision 3-D – After taking your seat in the plushly appointed 584-seat theater, don your special 3D glasses to watch this wacky 13-minute trip through the Muppet Laboratories. 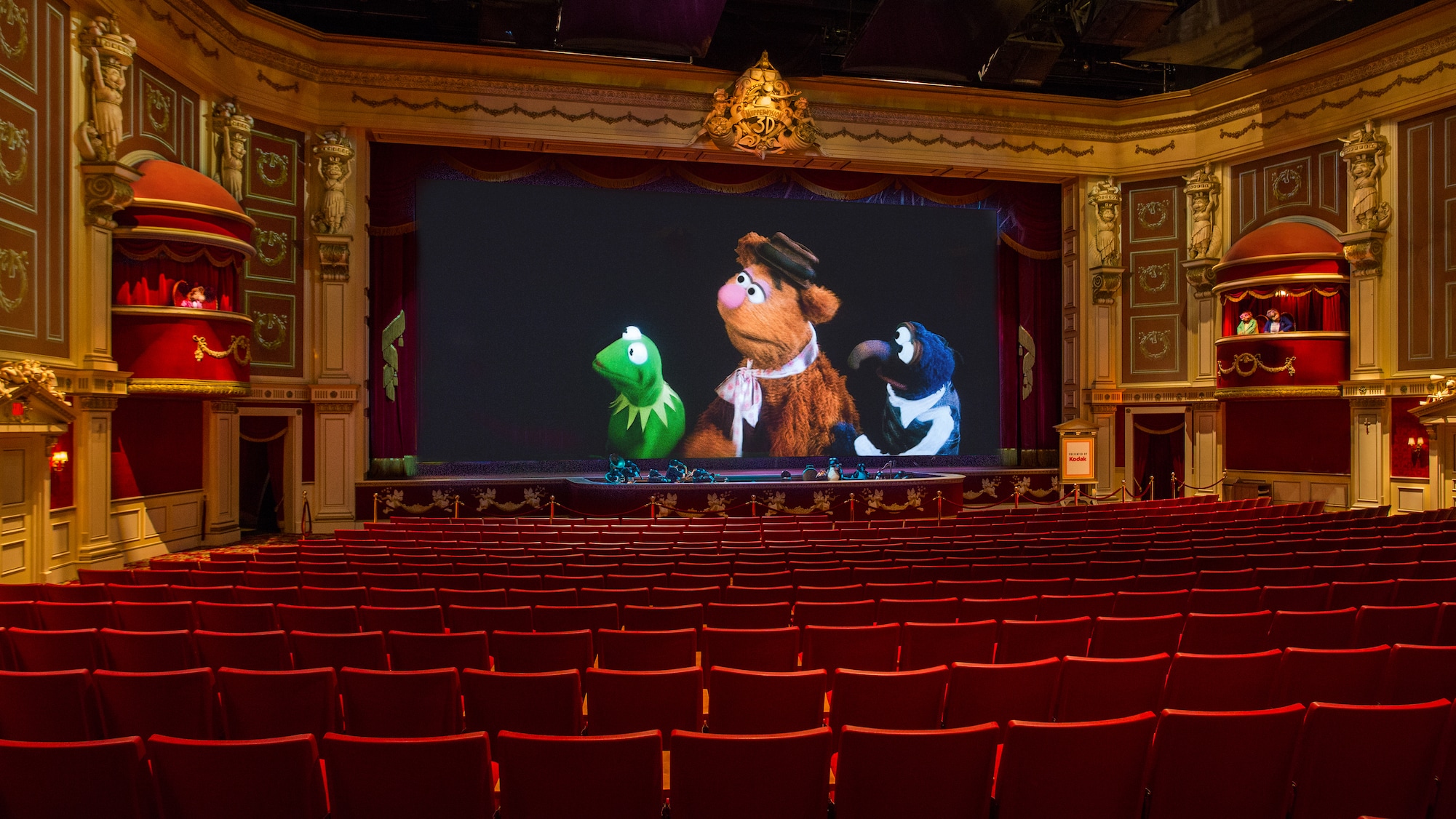 Don’t be surprised when your sight isn’t the only sense to be stimulated! You’ll be blasted with a burst of air, squirted and suddenly find yourself in a dreamy shower of soap bubbles at various times throughout the show. Dr. Bunsen Honeydew and his assistant, Beaker, begin the demonstration with disastrous results, releasing an impish 3D character called Waldo. 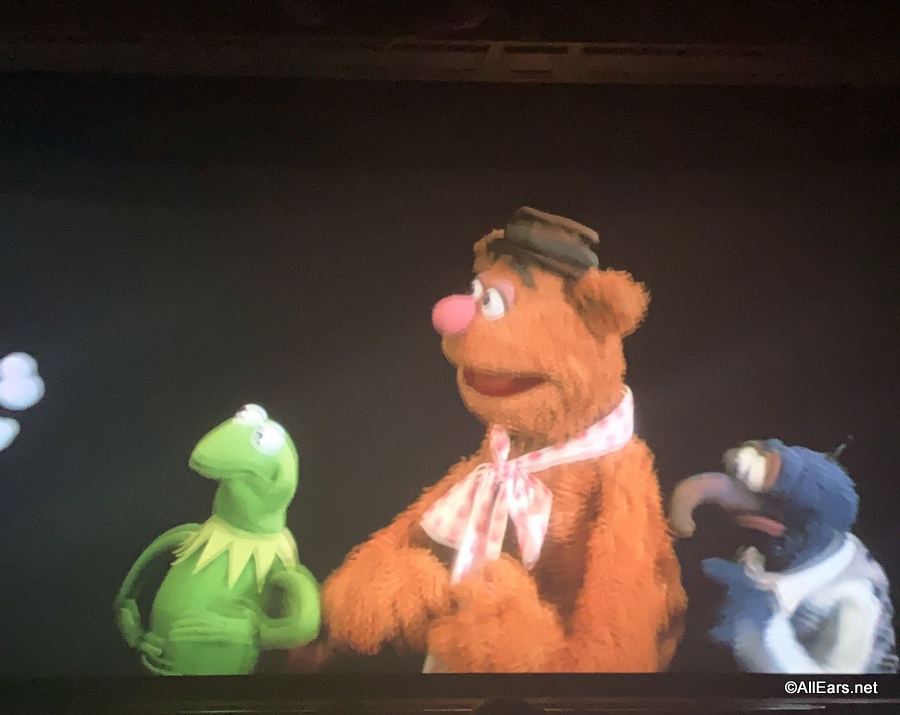 Things go from bad to worse, as the Swedish Chef commandeers the projector in the rear of the theater and Statler and Waldorf heckle from their box seats. The show comes to a raucous conclusion, with cannons exploding, fireworks blasting and penguins squawking in a tumultuous but happy ending. 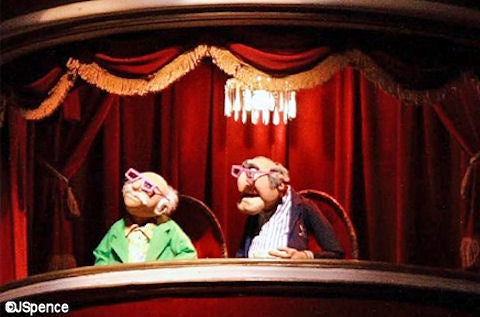 Lightning Lane access for Muppet*Vision 3D is available with the purchase of Genie+. Don’t be discouraged by large crowds waiting outside – the theater holds 584 guests and you’ll almost never have to wait more than 15-20 minutes for the next show.

There is no Height requirement.

Warnings: Certain parts of this attraction, particularly the conclusion, are very LOUD, and some small children may be frightened. Advise them to remove their 3D glasses and close their eyes if they become too overwhelmed. 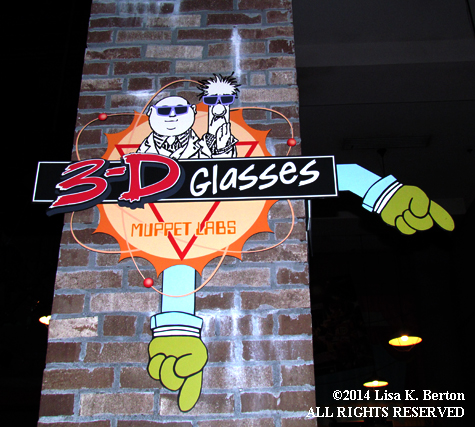 You will have to wear special 3D glasses to enjoy the full effect of this attraction. If you wear prescription glasses, you place the 3D glasses over them. You may find the 3D effects hard to see, even with the glasses in place. Try looking beyond the effect, rather than directly at it – this sometimes seems to help. Restrooms in the area are also Muppet-themed — as you approach the Muppets Courtyard you’ll find Gonzo’s Royal Flush restrooms on your left.

PizzeRizzo, a quick service pizzeria “owned and operated” by the Muppets’ famous rat, Rizzo, is open seasonally, and is located across from the Muppet*Vision 3D Entrance. 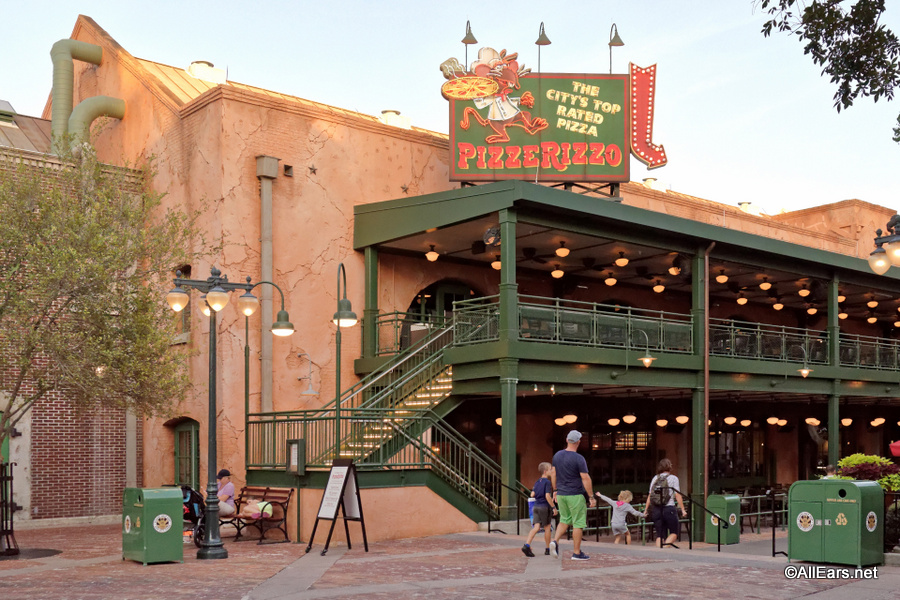 The Stage 1 Company Store, whose entrance is located to the left of Muppet*Vision 3-D, features Muppet items for both children and adults. 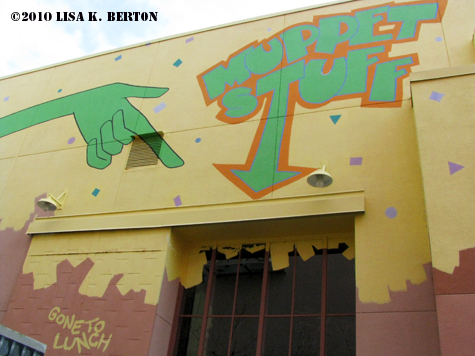 HIDDEN MICKEY: See if you can spot the Hidden Mickey test pattern in the pre-show video, just after Scooter crosses the screen for the second time.

The show, which opened on May 16, 1991, is a joint effort by Jim Henson Productions, Walt Disney Studios and Walt Disney Imagineering (WDI), the design and engineering division of The Walt Disney Co.

Also in the pre-show area you’ll spy a sign that tells you the key has been left under the mat — if you look down, you’ll find the mat, and there really is a key under it! 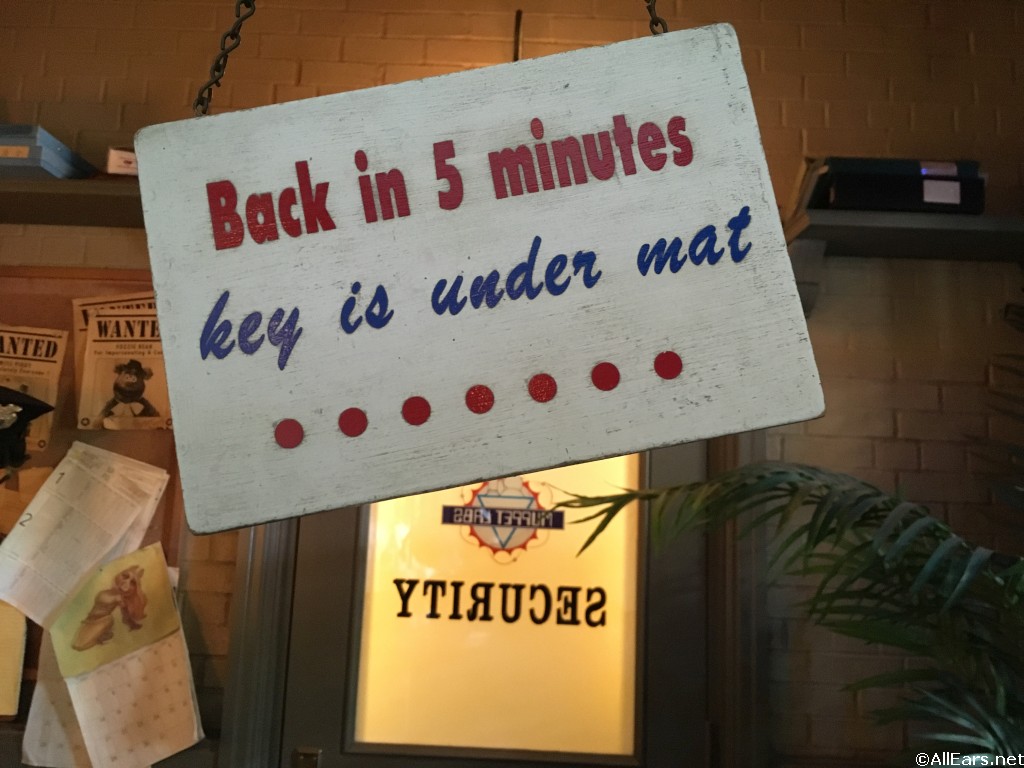 To create the ideal setting for Muppet*Vision 3-D, Imagineers designed a theater that brings the show directly into the audience, causing some to call the experience 4D, or 4 Dimensional. Guests are squirted with water, blasted with air, and real soap bubbles float through the air throughout the show.

Muppet touches can be found throughout the architecture’s ornamentation, including the Jules Verne-style projector contraption operated by the Swedish Chef.