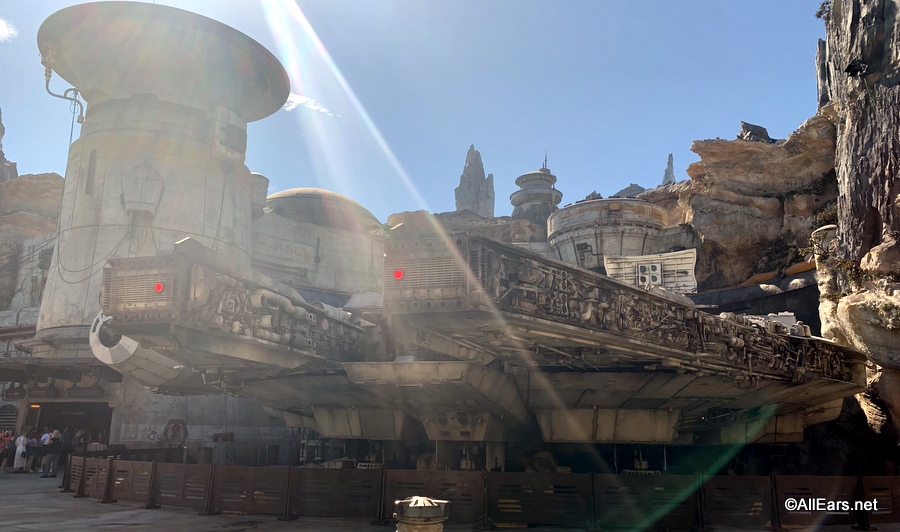 Millennium Falcon: Smugglers Run,  which gives guests the opportunity to fly the Millennium Falcon. You’ll be given one of three positions before heading into the cockpit of the iconic ship, where your actions determine the success of your mission. 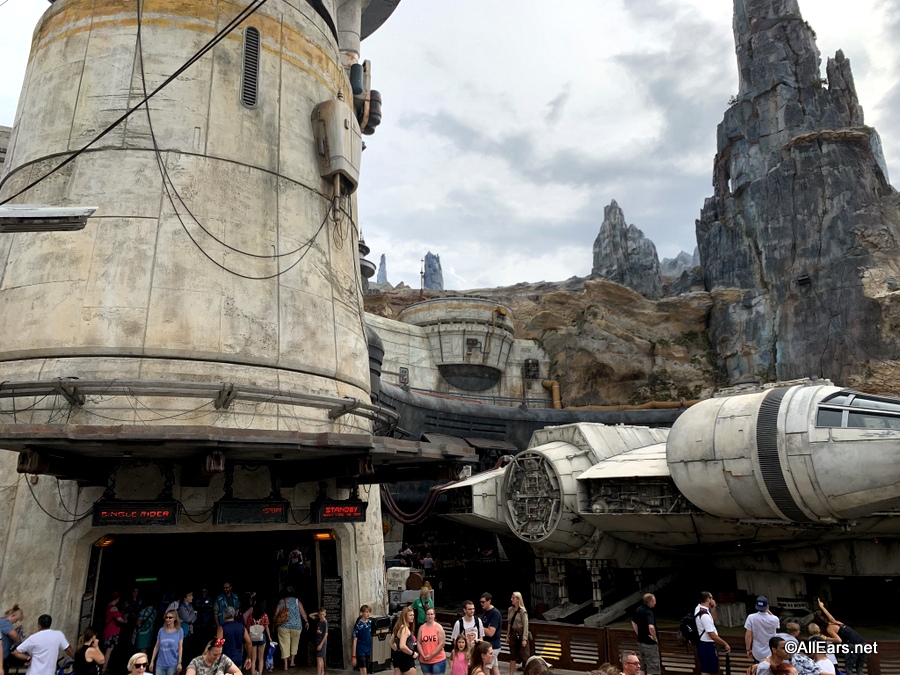 On-board the iconic Millennium Falcon, guests receive a mission and take on three critical roles: Pilot, Flight Engineer, and Gunner. Each role has different tasks to complete: firing lasers, steering the “fastest hunk of junk in the universe”, and activating hyperspace. The outcome of your mission actually affects your other experiences within Galaxy’s Edge. 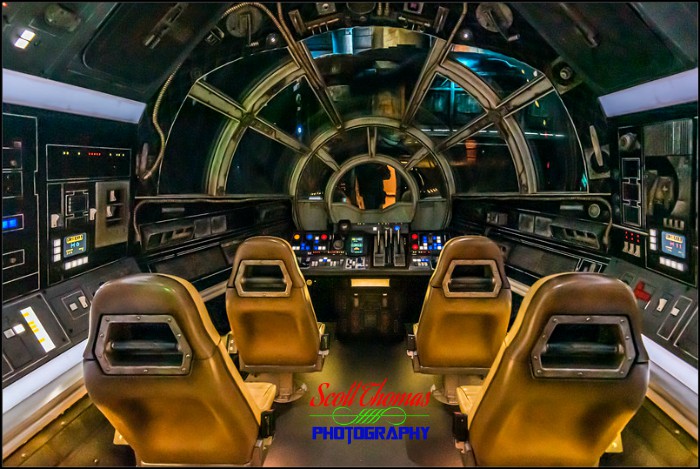 SPOILER ALERT: The following is a more detailed description with spoilers!

The setting: a village of Black Spire Outpost on the remote planet of Batuu. Your mission begins here in a spaceport, where the 110-foot Falcon starts its engines and vents thrust gases while docked nearby in a maintenance bay. 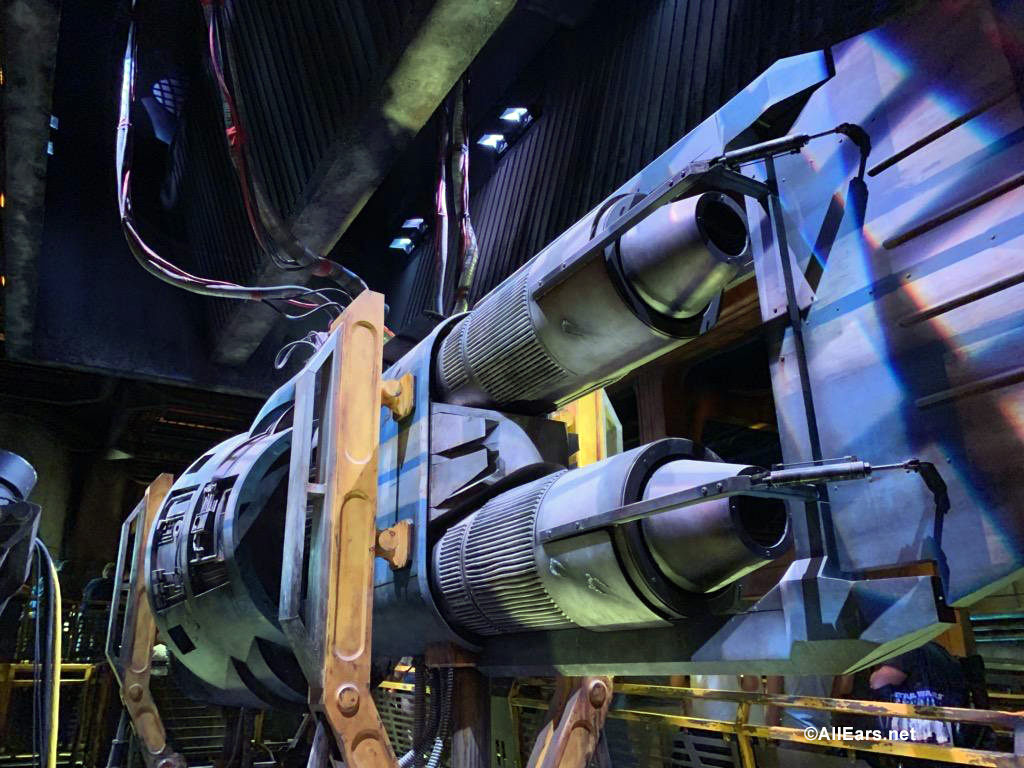 The queue takes you into Ohnaka Transport Solutions, where you see communication equipment and cargo containers full of Stormtrooper armor. Eventually you make your way up to a second-story switchback on a catwalk. There you see “an animated blaster-riddled starship engine suspended from the ceiling” glowing red. As you weave through the queue, keep an ear out for the Ohnaka workers. You can see the Millennium Falcon from several different angles while waiting to board. 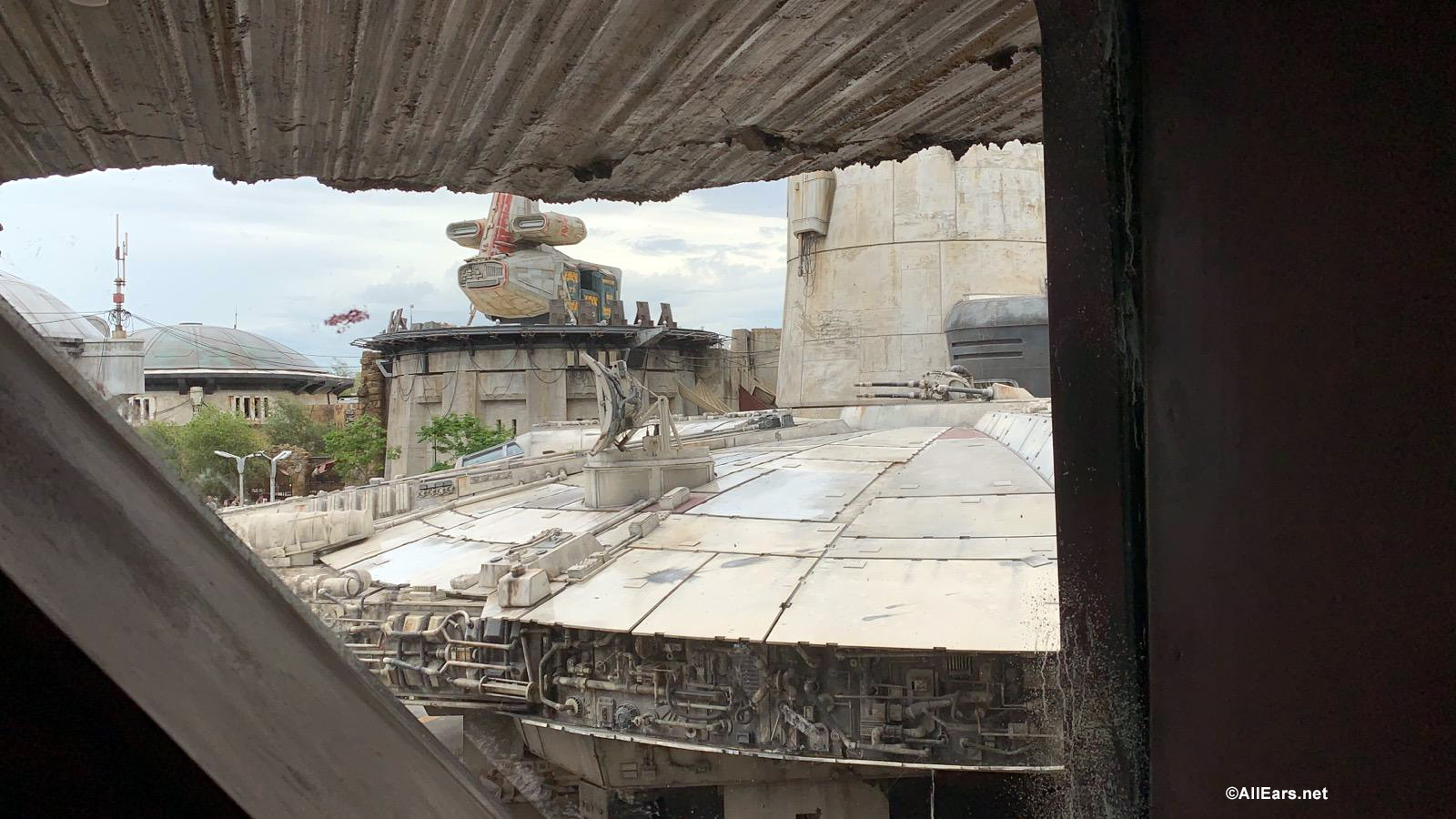 Time for your mission! You receive the details for your smuggling mission from an animatronic of the dreadlocked space pirate, Hondo Ohnaka and his droid R5P8.

The droid keeps everyone on schedule and fixes equipment in the command center. Then, you see the Falcon hover behind them on a video screen.

As you board the ship, you’ll be handed a card with your Crew name (color) and assignment. The roles are Pilot, Gunner, and Engineer. Pilots steer and fly the ship, gunners shoot missles and blasters, and engineers repair the ship. 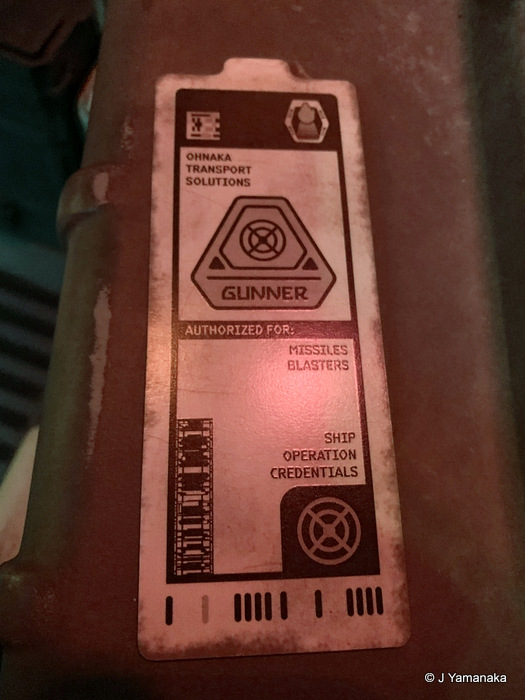 Smugglers (you) will then wait in the Main Room of the ship. Look around and take photos of the iconic hologram chess table (remember: “let the Wookiee win!”). Listen up for your crew’s color to be called, because when it is, it’s time to fly! 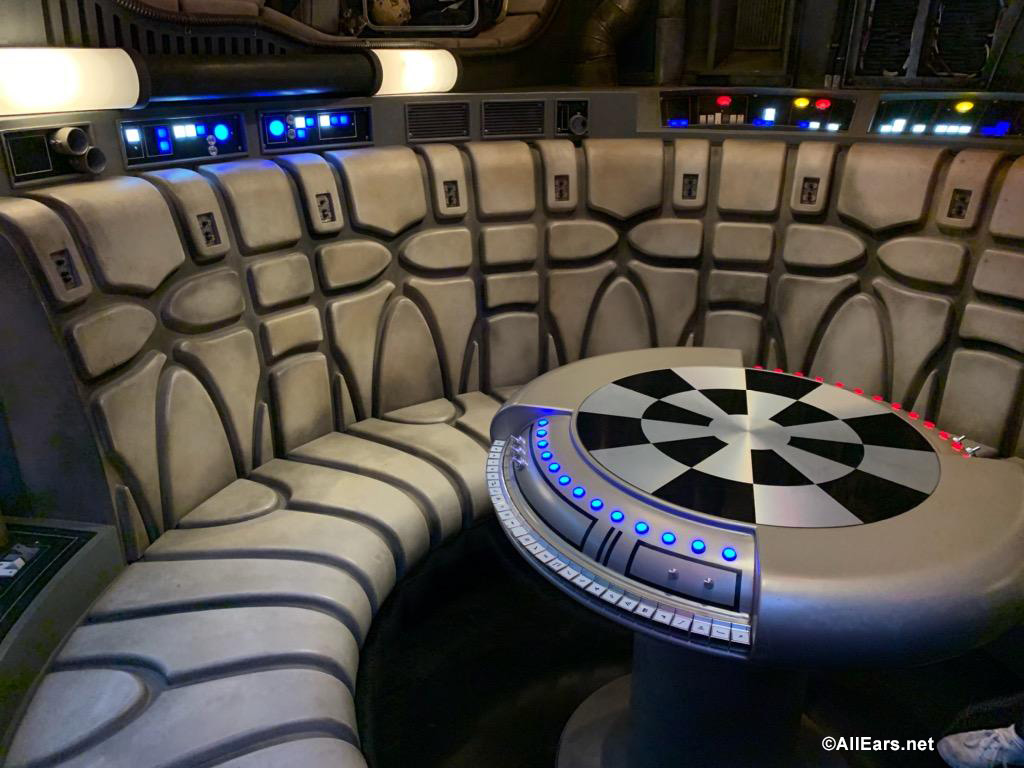 Six riders get into the cockpit — two pilots in the front (they get the best view!), two gunners in the middle, and two engineers in the back. This is very interactive as switches, levers, and buttons make sounds when activated. The hangar bay is seen outside your windows, and it’s time for your mission. 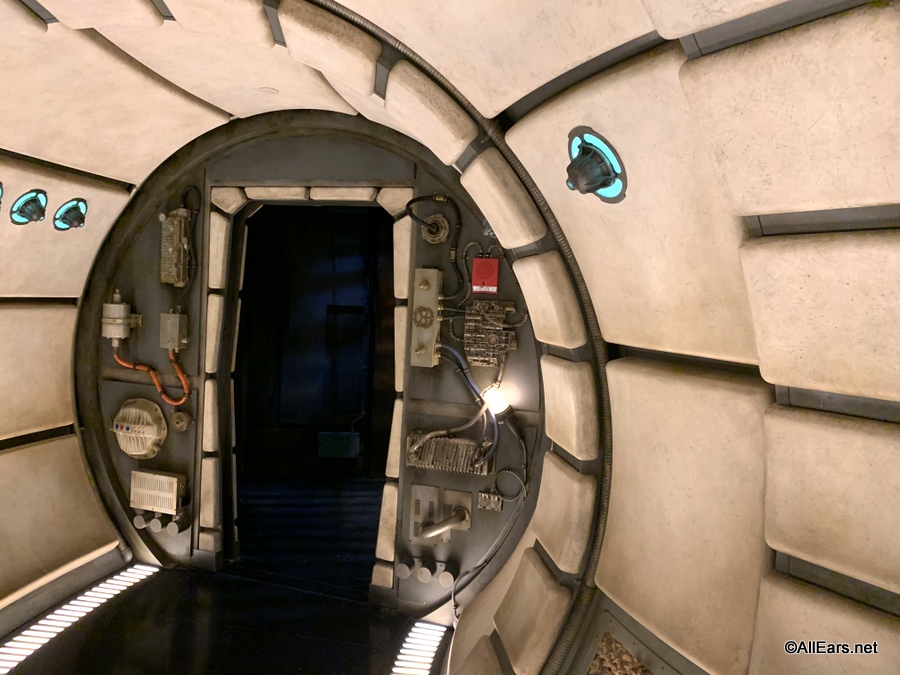 You are battling First Order TIE Fighters. And don’t forget, there are different outcomes of the mission based on how well your team works together against the enemy. Make sure to listen up to Hondo and look for buttons and levers to light up, as they will help you succeed in your role.

After the mission, you return to Batuu and disembark — the Falcon will be “right where you left it.”

Check out this AllEars Rides video where we take you inside and give you plenty of tips to enjoy your time onboard.

Lightning Lane access for Millennium Falcon: Smugglers Run is available with the purchase of Genie+. It is very popular with average lines being between 45-80 minutes.

There is single rider queue for this attraction. You will bypass the majority of the queue, including the scene with Hondo. You will fill in for crews who are missing a flight member, meaning you will likely be the engineer every time. However, the queue is usually much shorter.

There is a height restriction on this ride. Riders must be at least 38 inches (97cm) or taller.

If you have a preference on your role, you can kindly ask the Cast Member assigning positions. They may not be able to accommodate, but you can always ask.

Accessibility: You can take a wheelchair or ECV through the entire queue and preshow, however, you’ll need to be able to transfer to the seats inside the cockpit for the actual ride.

When the land reaches capacity, a virtual Boarding Pass may be issued via My Disney Experience. This is not a common occurrence. 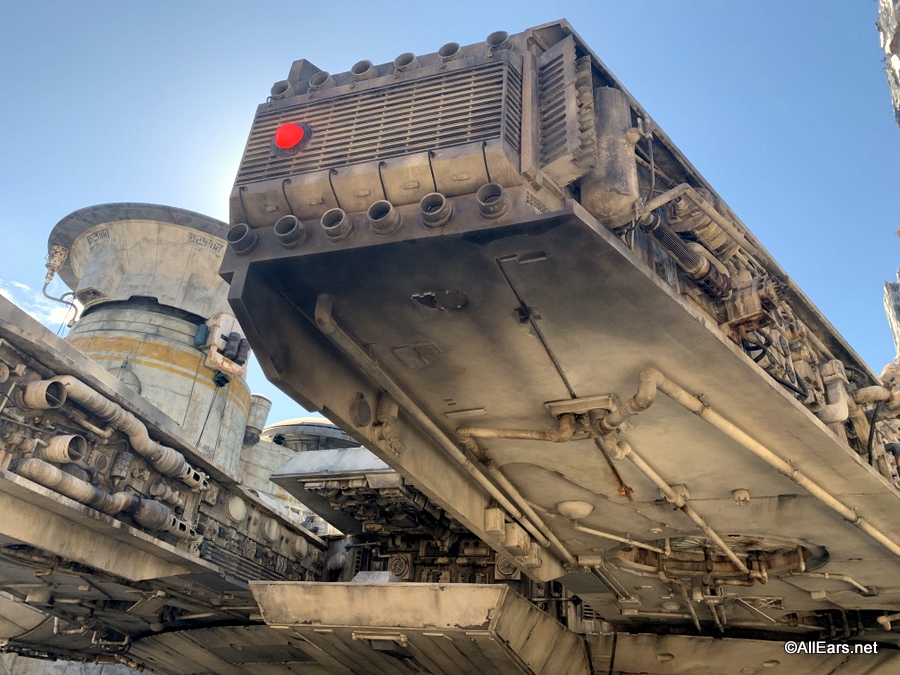 Hondo is voiced by Disney legend Jim Cummings, who voiced the character in the Star Wars series (he’s also the voice of Winnie the Pooh, as well as many other Disney and Star Wars characters).

When you disembark your mission, the lights will flicker. The intensity of the damage is based on how well (or poorly) your crew did.

At the exit of the attraction, look for a rather in carbonite. 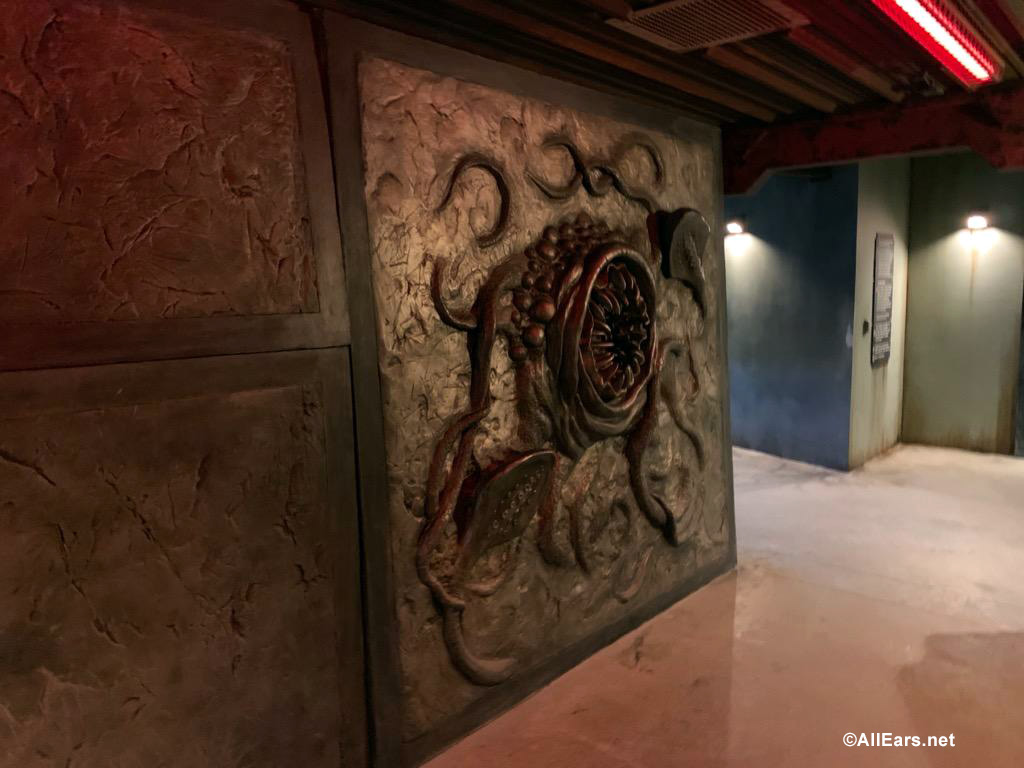