For over 60 years, Walt Disney Imagineering has been in the business of creating thrills. Over the years they’ve crafted everything from psychological thrillers like The Haunted Mansion that preyed on guests’ emotions to the out and out exhilaration of Space Mountain, to almost universal success.

However, this isn’t one of those success stories. Rather today’s is a tail that ends not with a legendary long-running E-Ticket, but with the closing of arguably Disney’s most thrilling attraction ever — the ExtraTERRORestial Alien Encounter – in less than a decade. How could the Imagineers have swung and missed so badly? Let’s find out.

The roots of the Alien Encounter story reach back to the mid-1980s, when Michael Eisner and Frank Wells assumed leadership of the Walt Disney Company. As many Disney fans know – particularly those who watched The Imagineering Story on Disney+ – Eisner had a singular goal when it came to Disney’s theme parks: make them hip to teenagers and young adults of the time.

That edict led to the creation of the Videopolis night club, the Captain EO 3D film, and the introduction of outside properties like Star Wars and Indiana Jones into the parks. However, what even some hardcore fans may not know is that Eisner had his eyes on another film franchise to bring into the parks: the Alien films.

While the Alien films, in particular the R-rated first installment, may seem like a strange concept for Disney parks, one should remember that they were likely just as well known to teens of the mid-late 80s as Star Wars. Plus, the Imagineers felt like they had the perfect way to integrate the titular Alien creature into Tomorrowland at both Disneyland and in Walt Disney World’s Magic Kingdom.

Namely, they would close the long-in-the-tooth Mission to Mars attraction, and reuse it’s in-the-round theater to present a new kind of thrill. Their idea was to create a binaural attraction, using pitch blackness, a timed series of sound-cues, and in-theater physical effects to terrify guests who were strapped into seats that didn’t move an inch by convincing them the the Xenomorph creature was running wild through the room. And best of all, because most guests would be at least familiar with the film franchise, guests would know beforehand that the attraction was likely too scary for young children.

While both Eisner and the team behind the Nostromo – named for the ship in the first Alien film – attraction felt they a potential anchor attraction for a rebooted Tomorrowland, a group of older Imagineers felt that the subject matter was still inappropriate for the company’s parks. With their complaints falling on deaf ears within the company, they went to legendary filmmaker George Lucas, whose relationship with Disney was at its zenith, having produced Star Tours and the then-upcoming Indiana Jones Adventure attraction. 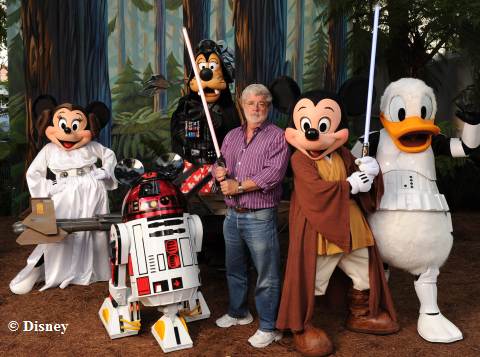 The older Imagineers were able to sway Lucas, who in turn was able to convince Eisner not to put the R-rated franchise into Disneyland or the Magic Kingdom (though Alien would be a major part of the Great Movie Ride at Disney/MGM Studios). Instead, Lucas began working with the creative team on original ideas for the attraction, which in retrospect was the beginning of the end of Alien Encounter.

Despite the “creative dream team” in charge, Lucas and the Imagineers struggled to crack an original story for the attraction, all while construction in the Magic Kingdom was on-going. Without the instantly recognizable intellectual property of the Xenomorph, the team had trouble coming up with a terrifying creature that could take advantage of the binaural sound elements that were already being designed. On top of that, they needed to craft a back story that could instantly express how scary the attraction was going to be.

The Imagineers eventually soft-opened the attraction in December 1994 with a slightly complex story centered around X-S-Tech (get it?), a futuristic interstellar corporation that is hosting an open house in Tomorrowland. After a humorous pre-show, guests were shepherded into the theater, where it was revealed that X-S Tech was using the guests as “human guinea pigs” to expose them to an alien they’d captured. The creature would menace the guests for a bit, before turning on the X-S scientists, disabling their weapons, and releasing the restraints allowing guests to escape. The creature could then be heard massacring the scientists as guests exited through the gift shop.

In all seriousness, that original story was met with vastly negative reviews, with surveyed guests complaining about the violence, the confusing storyline, the comedic tone of the pre-show in comparison to the dark tone of the actual attraction, and biggest of all the complaint that it was too scary for kids. Due to the reaction, the soft-openings were halted, and the attraction was delayed for months in an effort to retool. 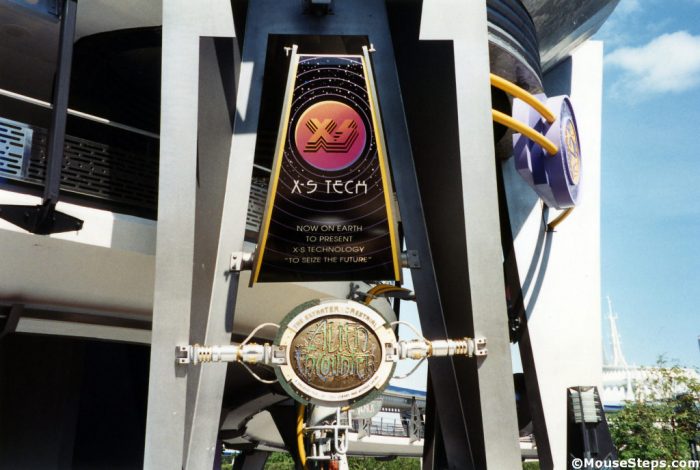 When the ExtraTERRORestial Alien Encounter finally opened officially in June of 1995, the comedic pre-show had been replaced with a more sinister one featuring X-S Tech’s villainous Chairman Clench and the Tim Curry-voiced S.I.R. animatronic who would demonstrate X-S’s tech’s teleportation technology by frying a hapless creature named Skippy. All of which, plus the name itself, was an attempt to let guests know just how scary the attraction was before they boarded.

The main portion of the encounter was reworked as well, with the demonstration now centered around X-S Tech’s teleportation technology accidentally beaming the creature in to the room with the guests. The alien’s previous nobility was abandoned, and it menaced guests until it was destroyed by brave X-S technicians Spinlok and Dr. Femus.

However, even with the simplified storyline and heavy emphasis on how scary the attraction was, Disney continued to receive complaints from parents and other guests about just how scary the attraction was. These complaints, combined with budget issues, led to the cancellation of the Disneyland version of the ride as well as potential future additions to the Paris and Tokyo resorts. Despite a cult following of fans that came to love the attraction, and the character of Skippy in particular, these issues led to the specter of closure hanging over Alien Encounter almost from the day it opened.

The hammer finally fell in 2003, when the attraction closed to make way for Stitch’s Great Escape, which opened the next year. The Stitch attraction, which was an overlay of the existing Alien Encounter system, proved to be wildly unpopular with many guests, often earning the dubious distinction of “Worst Ride at Walt Disney World.” Despite this, Stitch’s Great Escape has now outlived Alien Encounter by several years, though it’s been on a seasonal schedule since 2016, and rumors of its replacement with a Wreck-It Ralph attraction have heated up recently.

Well there you have it folks, the story of Walt Disney Imagineering’s scariest attraction. One so thrilling, arguably too thrilling, that it was forced to close in less than a decade.

Did you ever have a chance to ride the ExtraTERRORestial Alien Encounter? If so, do you feel it was too scary for Disney, or do you still miss it every time you visit the Magic Kingdom? Let us know in the comments below.