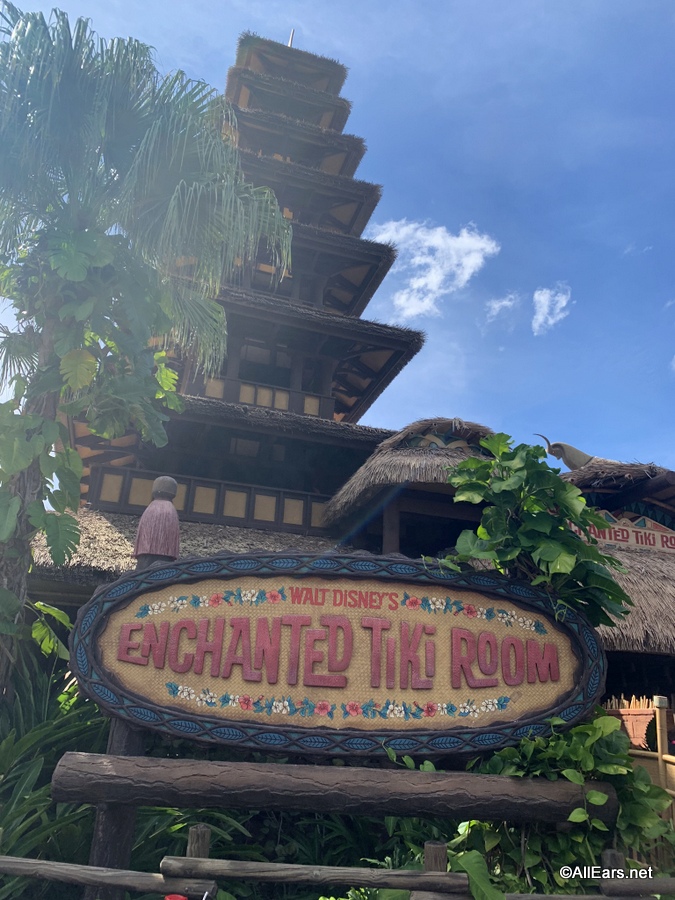 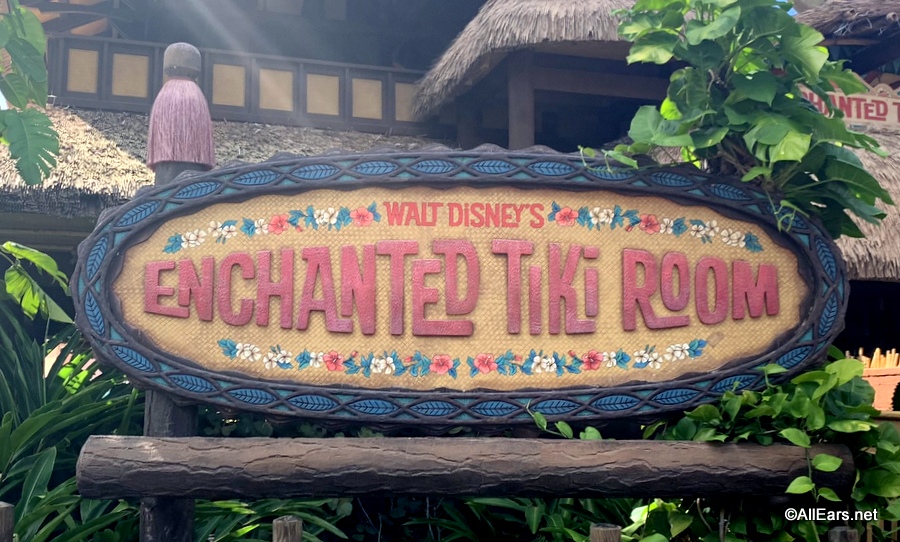 Walt Disney’s Enchanted Tiki Room is an opening day attraction in Magic Kingdom. It’s gone through a few iderations, but the current version is close to the original in Disneyland.

The Enchanted TIki Room is located in Adventureland, just across from the Jungle Cruise and near The Magic Carpets of Aladdin. 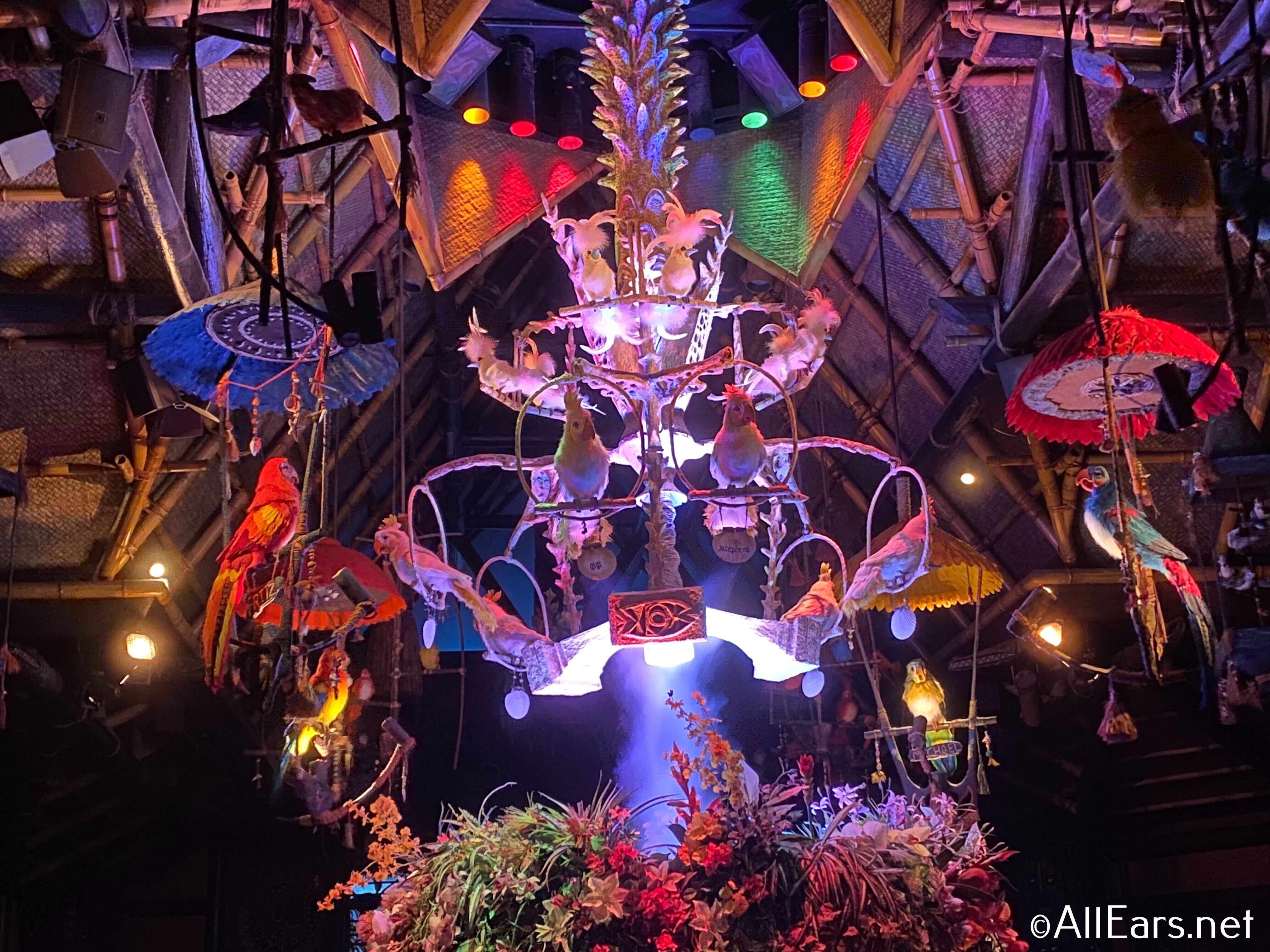 Preshow — Before you enter the Tiki Room, you’re treated to a few minutes of introduction. Unfortunately, you have to stand during this intro, but eventually the theater doors open. Inside the dark and cool theater, you’re seated on long, backless benches, with all the animatronic birds perched above.

Walt Disney’s Enchanted Tiki Room — This attraction has been restored almost to its original version.The original hosts are birds named Jose, Michael, Fritz and Pierre. The almost 10-minute show starts with these characters leading the other birds in the famously familiar tune, “In the Tiki Tiki Tiki Tiki Tiki Room…” 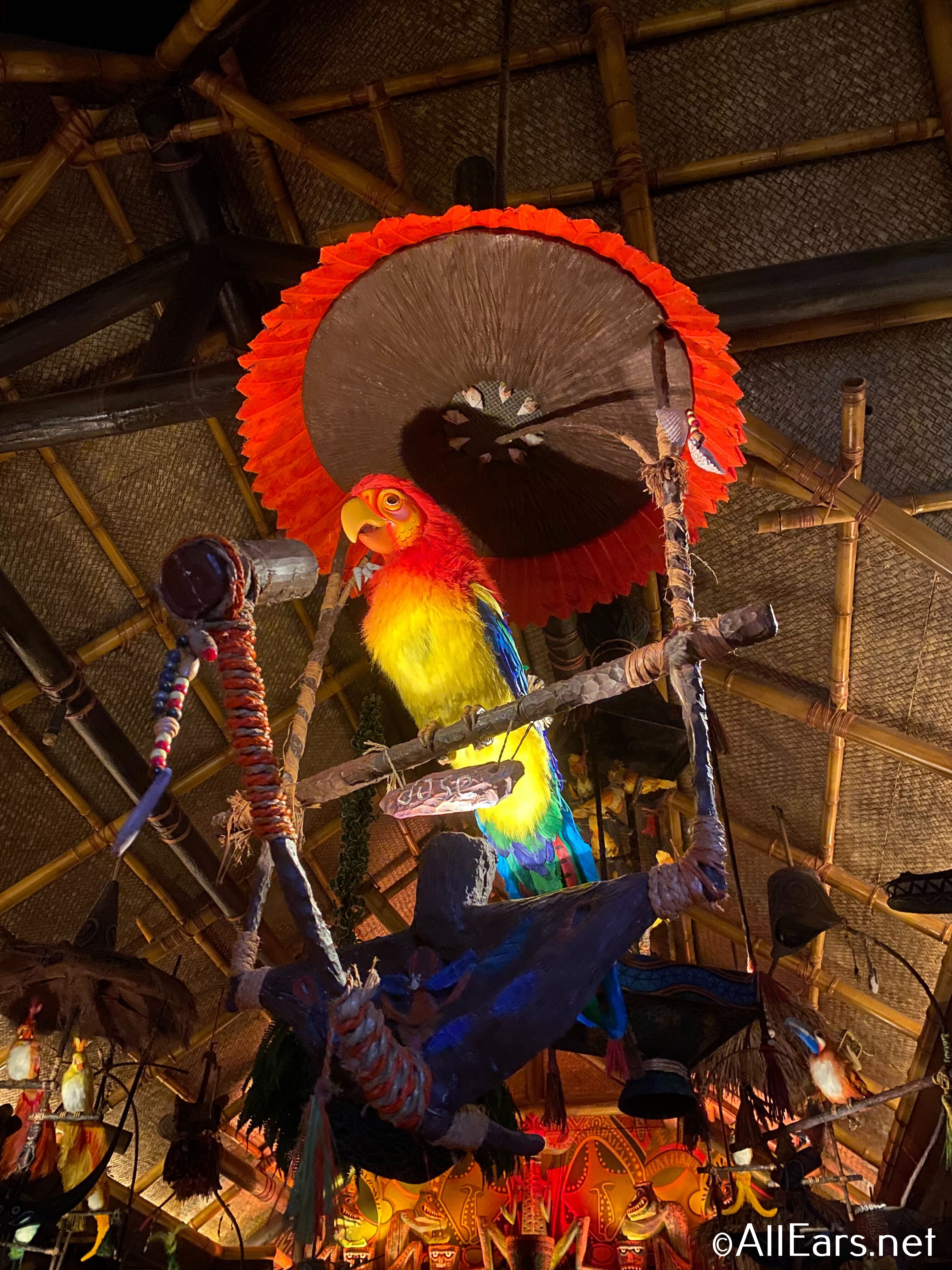 The show features a cast of more than 300 talking, singing and dancing birds, flowers, tiki drummers and totem poles that perform the attraction’s signature tunes, including “Let’s All Sing Like the Birdies Sing.”

The finale has every Audio-Animatronic figure performing a rousing version of “Hawaiian War Chant”. The choice of exit music is somewhat unusual, namely an arrangement of “Heigh-Ho” from Snow White and the Seven Dwarfs with lyrics thanking guests for watching the show and hurrying them to the exit.

There are no Lightning Lanes for this show, but there is rarely a long wait. Typically, you just have to wait for the previous show to finish before you can enter the theater.

The theater is quite dark at times, which may frighten some small children. Some children may find some scenes a bit scary or intense (see Kids and Characters, below).

Guests using an ECV or a wheelchair may remain in it during this attraction.

The Aloha Isle  is just behind the Enchanted Tiki Room for quick snacks, beverages, and the famous Dole Whip. 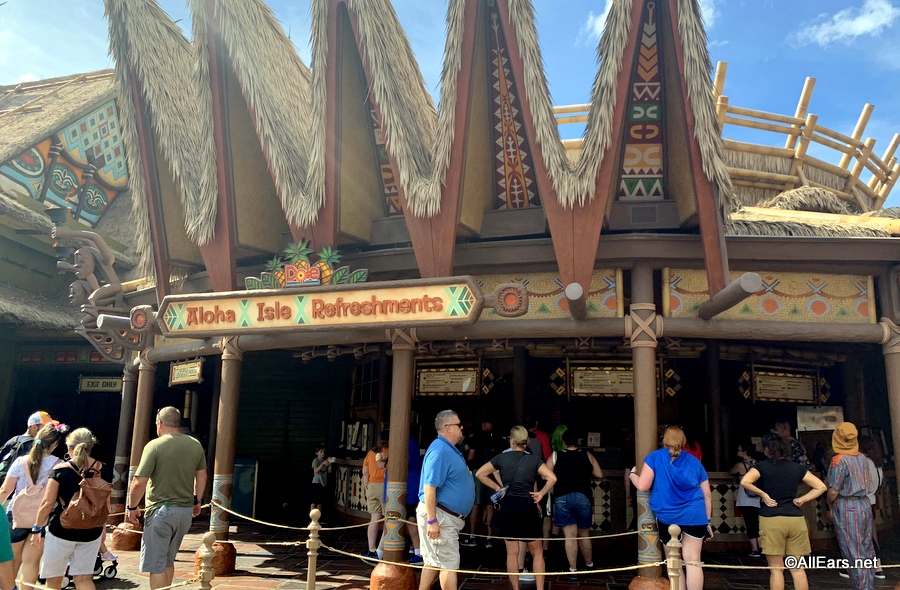 There is plenty of souvenir shopping to be done at nearby Agrabah Bazaar, on the other side of the Magic Carpets of Aladdin. They often have Enchanted Tiki Room themed merchandise. 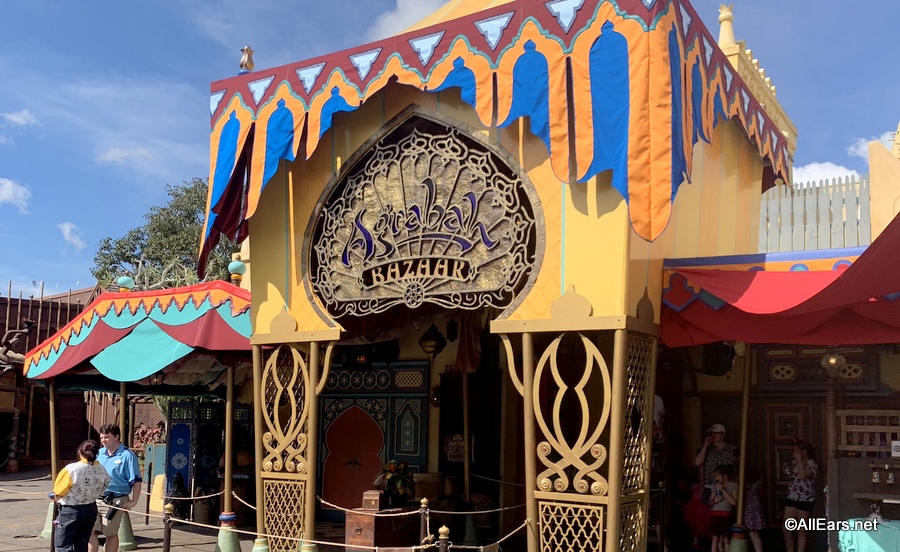 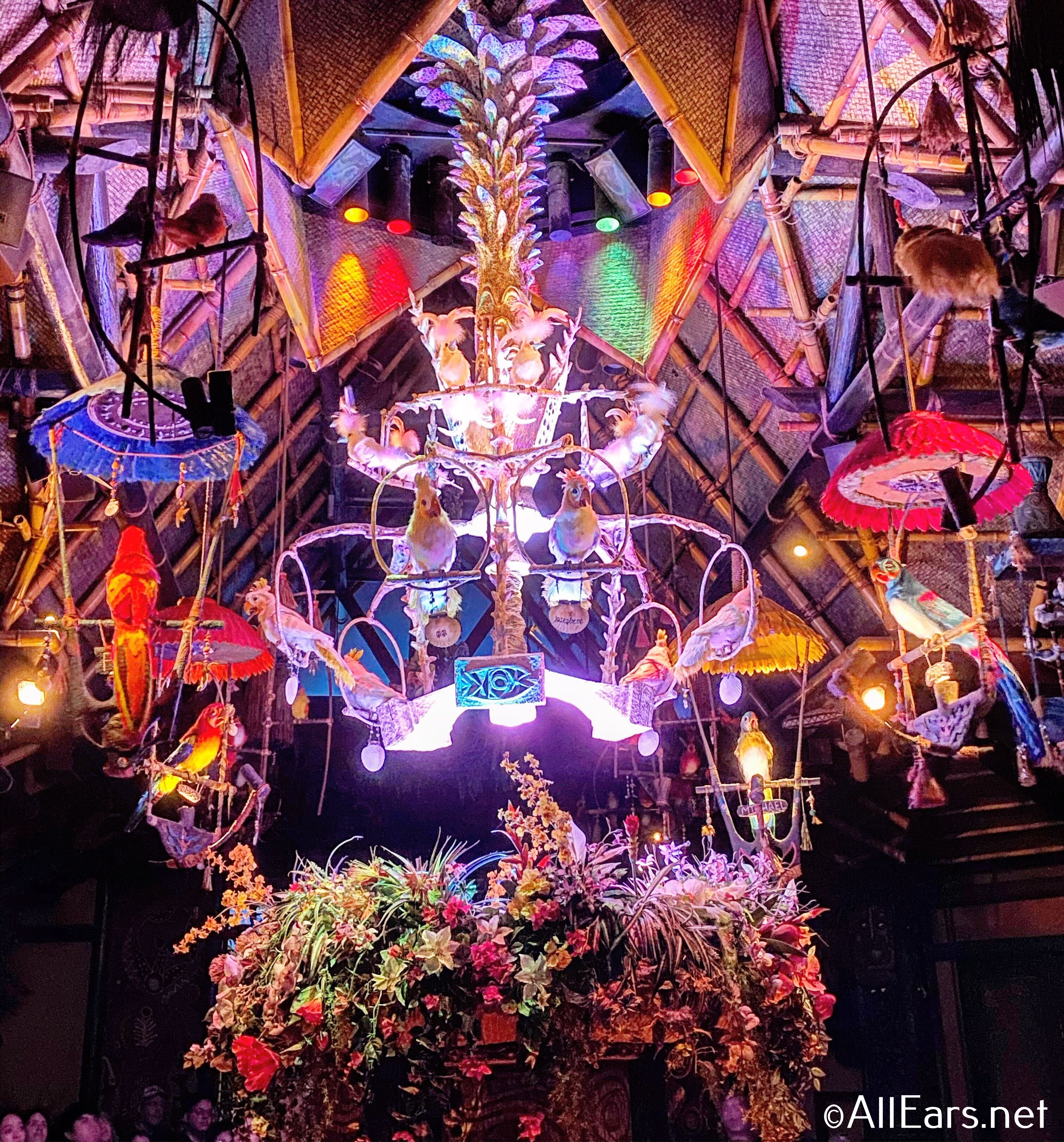 The original “Enchanted Tiki Room” debuted at Disneyland in California on June 23, 1963, and was the first attraction to use Audio-Animatronics technology.

The Walt Disney World version of the Tiki Room, called “Tropical Serenade,” debuted October 1, 1971, and was originally sponsored by the Florida Citrus Growers.

The show closed in 1997, then reopened in 1998, as “The Enchanted Tiki Room: Under New Management” and starred Iago and Zazu.

The original group of Audio-Animatronics characters continue to star in the show including Jose, Michael, Fritz and Pierre. Walt Disney Imagineers had three of the four original actors re-record audio segments for the new show.

The late actor Jerry Orbach, well-known as the voice of Lumiere in Disney’s Beauty and Beast films, supplied the voice of the French parrot Pierre in this revamped version of the Tiki Room.

The voices of Jose, Michael, and Fritz were supplied, respectively, by Disney mainstays Wally Boag, Fulton Burley and Thurl Ravenscroft.

The show features 314 figures including flowers, statues and birds.

The attraction’s well-known theme song, “In the Tiki, Tiki, Tiki, Tiki Room,” was written, like many other Disney classics, by Richard and Robert Sherman.

On January 12, 2011, a small fire broke out in the attic of the attraction. The Iago audio-animatronic figure was severely damaged in the blaze. It was announced at Disney’s D23 Destination D: Walt Disney World 40th Anniversary Conference that the attraction would be refurbished and returned to the original show format.