When you visit Tomorrowland at Walt Disney World, you’ll see a wide range of sci-fi attractions, from classic Space Mountain to Buzz Lightyear’s Space Ranger Spin. But perhaps one of the most intriguing and overlooked rides is the Tomorrowland Transit Authority – otherwise known simply as the PeopleMover.

The slow-moving tour of Tomorrowland is more than just another attraction. Rather, it ties in with a key Disney legacy, tying back to Walt Disney’s vision for a utopian, futuristic tomorrow.

So today, let’s explore the rich and fascinating history of the PeopleMover.

Origins at the World’s Fair

New York’s 1964-1965 World’s Fair was an important point in Disney history. Walt Disney used the opportunity to develop and market innovative technology he could take back to Disneyland – with corporate sponsors paying him for the honor of showcasing pavilions for them. Disney provided four different attractions that proved popular with guests, and three of them later found a home at the parks: it’s a small world, Carousel of Progress, and Great Moments with Mr. Lincoln.

The fourth attraction, Ford’s Magic Skyway, never reappeared after its World’s Fair debut, but it nevertheless made a significant impact in Disney Imagineering. The ride involved guests boarding classic Ford cars and traveling back in time to animatronic scenes of dinosaurs and cavemen. However, the ride’s concept posed a problem: how to avoid fender-bender collisions between the cars. Imagineers came up with a new approach inspired by Ford’s own manufacturing system; they mounted the cars to a constantly moving conveyor belt, so all the vehicles moved in perfect sync. Ford’s Magic Skyway was the second most popular ride of the fair, and it inspired Walt Disney to advance the technology even further.

A New Ride for Tomorrowland

Around the same time, Disneyland Anaheim was preparing to improve its Tomorrowland area, since modern advances were outpacing the land’s early sci-fi aesthetic. The “New Tomorrowland” project reimagined Tomorrowland’s futuristic vision and brought in new attractions that delighted guests. These additions included the PeopleMover, which took the concept of a motorless, always-moving ride and applied it to a tour of Tomorrowland.

The original PeopleMover at Disneyland gave guests an elevated view of Tomorrowland. Not only did the ride go around Tomorrowland, but it also went inside some of the attractions. For instance, you could gain a unique view of Space Mountain’s interior, letting you get a glimpse of the ride even if you weren’t a fan of rollercoasters. It offered a fun way to experience the whole of Tomorrowland, demonstrating the utility of the unique track system.

But Walt intended the PeopleMover to be more than simply a ride at his parks. Rather, he believed that the PeopleMover could become an alternate means of public transportation. He was already developing plans for his Experimental Prototype Community of Tomorrow (EPCOT). He imagined EPCOT as a utopian metropolis in Florida alongside Disney World. In this futuristic city, there would be no cars cluttering the streets, creating traffic hazards. All citizens instead would use public transportation, including monorails and a WEDWay PeopleMover system. 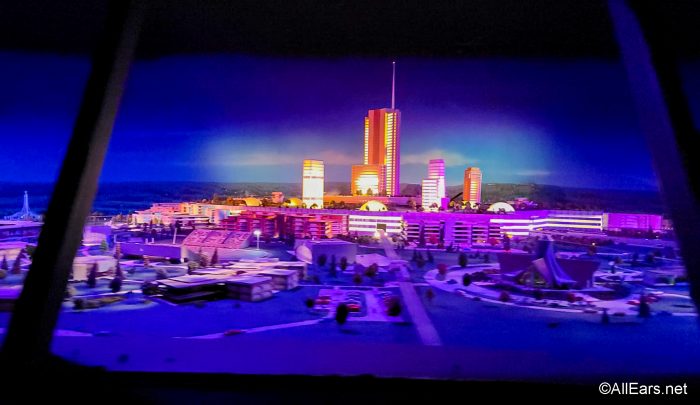 Unfortunately, Walt never got to see that dream become a reality, as he died in 1966, more than a decade before the eventual opening of EPCOT. Rather than try to create the new city without him, Disney leaders instead focused on making EPCOT into a second park at Walt Disney World. However, Walt Disney World still got its own PeopleMover, albeit not at EPCOT. Magic Kingdom’s Tomorrowland section received its own PeopleMover attraction in 1975 called the WEDWay PeopleMover (short for Walter Elias Disney). Like Disneyland, the Magic Kingdom PeopleMover offers a guided tour of Tomorrowland and takes you inside many of the local attractions.

Sadly, the original version of the PeopleMover in Anaheim’s Disneyland no longer exists, due to a misguided renovation. During the 1990s, Disney tried to revamp its Tomorrowland areas with another wave of refurbishments, originally intended to embody the fantastic visions of early sci-fi stories. However, budget cuts during that time period sharply reduced the level of upgrades to Tomorrowland. In fact, rides viewed as outdated were removed — including the PeopleMover, which closed in 1995.

Feeling that the PeopleMover was too old-fashioned, Disney tried to revamp the ride into the newfangled Rocket Rods attraction, which opened in 1997. The new set-up added rocket boosters to the cars, with the intent of making the experience into more of a thrill ride. However, due to inadequate efforts to adjust the original set-up, the ride flopped horribly. To account for the original track’s sharp turns meant for slow-moving vehicles, the Rocket Rods had to erratically shift between sudden boosts and stops. Not only did this make the ride jerky, but it led to numerous breakdowns and traffic jams.

Moreover, the Rocket Rods permanently disabled Disneyland’s PeopleMover. The intense grinding from the Rocket Rods damaged the delicate track components. Constant malfunctions forced the ride to close indefinitely in 2000. Still, the extreme wear to the track makes restoring the PeopleMover, generations after its original design, into a costly and difficult proposition. Since then, the PeopleMover track has remained abandoned yet present in Tomorrowland, a gravemarker reminding us of we lost.

Fortunately, Magic Kingdom’s PeopleMover in Disney World hasn’t suffered the same fate. While Disney renamed the ride as the Tomorrowland Transit Authority in 1994, it never changed to the problematic Rocket Rods. In addition, the 1994 upgrades included new narration from Pete Renaday to engage riders in Tomorrowland’s fictional sci-fi setting. For instance, the announcements claimed that passengers were riding the “Blue Line”. The fictional Green Line supposedly went to hovering neighborhoods, while the Red Line connected to other planets.

The Tomorrowland Transit Authority received additional improvements during a refurbishment in 2009. Along with a new paint job to the track and enhanced lights on the beamway, we got a new narrator: Mike Brassell, who has also composed music for the Disney parks and narrated Living with the Land. Not only that, but now you can hear voices from Disney characters as you approach the different attractions during the ride.

The PeopleMover was closed for almost a year between 2020 and 2021, and fans were delighted when the attraction finally reopened. Though its return to glory had a bit of a bumpy start, the PeopleMover (now with new narration!) once again offers guests  a chance to tour Tomorrowland and appreciate this lasting Imagineering legacy.