The Walt Disney World Resort theme parks are full of delicious snacks and dining options, but it’s not always possible to make it to the theme parks. You may not have a theme park ticket, may be due for an Annual Pass renewal, or may just want to have a resort day.

You can find these warm, pillowy clouds of fried dough and powdered sugar in orders of three or six at Scat Cat’s Club Café, right next door to the Sassagoula Floatworks and Food Factory.

If you want to take your beignets to another level, you can add your choice of salted caramel, strawberry, or chicory chocolate ganache dipping sauces to your order.

Baton Rouge Beignets (“boozy beignets” that come with your choice of Bailey’s, Kahlua, or RumChata liquors), Specialty Beignets (Raspberry, Cinnamon-Sugar, and Chocolate), and Mickey-Shaped Beignet Sundaes are also exclusive to this Resort hotel and available for purchase.

Click here to find out how to make your own Mickey beignets!

‘Ohana’s classic Bread Pudding a la modé is one of the best desserts at Walt Disney World Resort!

This mouth-watering dessert features a rich bread pudding topped with a generous scoop of vanilla ice cream, warm caramel, and bananas. Fortunately, even if you don’t have an Advance Dining Reservation for dinner at ‘Ohana, you can still try this yummy treat!

Next door to ‘Ohana is Tambu Lounge, a full-service bar which serves, you guessed it, the ‘Ohana Bread Pudding a la mode! You won’t find this “secret” item printed on Tambu Lounge’s menu. However, it is available for purchase as a single serving after 4:00 p.m., making the perfect afternoon “pick me up” before a beautiful stroll through Disney’s Polynesian Village Resort.

Click here for the recipe to make your own bread pudding!

The Tie-Dye Cheesecake at Disney’s Pop Century Resort may be one of our favorite and most underrated treats on this list!

It is exclusive to Disney’s Pop Century Resort and has been around for at least a decade. You can find it at Everything POP Shopping and Dining, the Resort hotel’s Quick Service dining establishment.

The Tie-Dye Cheesecake features an airy, colorful cheesecake atop a red velvet cake “crust.” Whoever dreamed up this fantastic crust deserves a prize, as it is absolutely delicious! The cheesecake comes conveniently packaged in a small, round container, and the portion is “just right” for one person.

This is a relatively simple and straightforward recipe, which packs groovy flavor, fun colors, and a fantastic price-point. We can’t get enough of this treat!

Disney’s Riviera Resort is the newest Resort hotel in Walt Disney World Resort, but it quickly became a guest favorite because of its incredible dining options (we’re looking at you, Topolino’s Terrace)!

From exquisite lattes at Le Petit Café to a “practically perfect” Monte Cristo at Bar Riva, the snack and dining options are endless at Disney’s Riviera Resort.

At the top of our list of Disney’s Riviera Resort snacks is the Chocolate Chunk Banana Bread found at Le Petit Café and Primo Piatto. 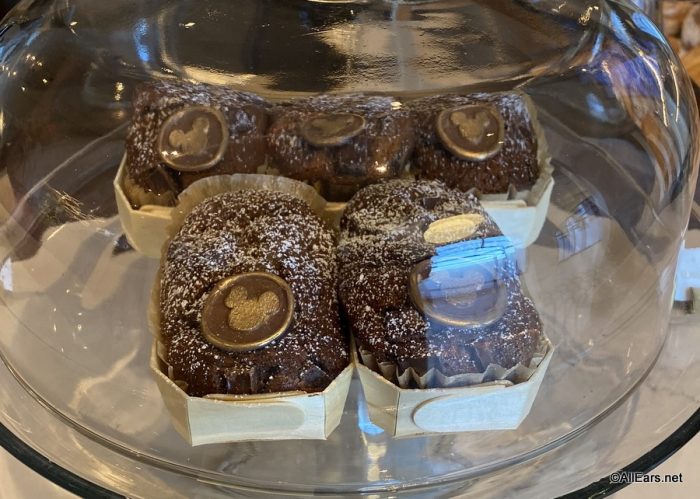 We find the portion to be just right for one person, and at $3.99 apiece, the price is excellent. If you have access to a microwave, pop your banana bread in it for a few seconds to take it up a notch!

One of the most unique cupcakes on Walt Disney World Resort property is located at Disney’s Wilderness Lodge Resort.

The Marshmallow and Chocolate Campfire Cupcake at Roaring Fork is a “must grab” anytime we are on property.

Classic DOLE Whip, a dairy-free pineapple soft serve, is one of the most popular snacks in all of Walt Disney World. DOLE Whip is refreshing, light, and dairy-free, which makes it an ideal snack to enjoy on hot Florida days.

Fortunately for fans of this frozen treat, DOLE Whip can be found outside of the Walt Disney World theme parks at Disney’s Polynesian Village Resort since 2014.

However, it’s the DOLE Whip with Rum Floater that is exclusive to Pineapple Lanai and a “must-try” for fans of DOLE Whip and Rum. This dish will transport you to a tropical paradise with its combination of Pineapple DOLE Whip and Parrot Bay Coconut Rum — a match made in Disney snack heaven!

Beaches & Cream Soda Shop at Disney’s Beach Club Resort is famous for its delicious sundaes, milkshakes, and of course, its Kitchen Sink — which includes a whole can of whipped cream!

However, it’s the No Way Jose sundae that always keeps us coming back for more.

Have you tried or plan on trying any of these Walt Disney World Resort hotel-exclusive snacks? Please let us know in the comments below!

Get more from the Resorts of Walt Disney World at the links below!