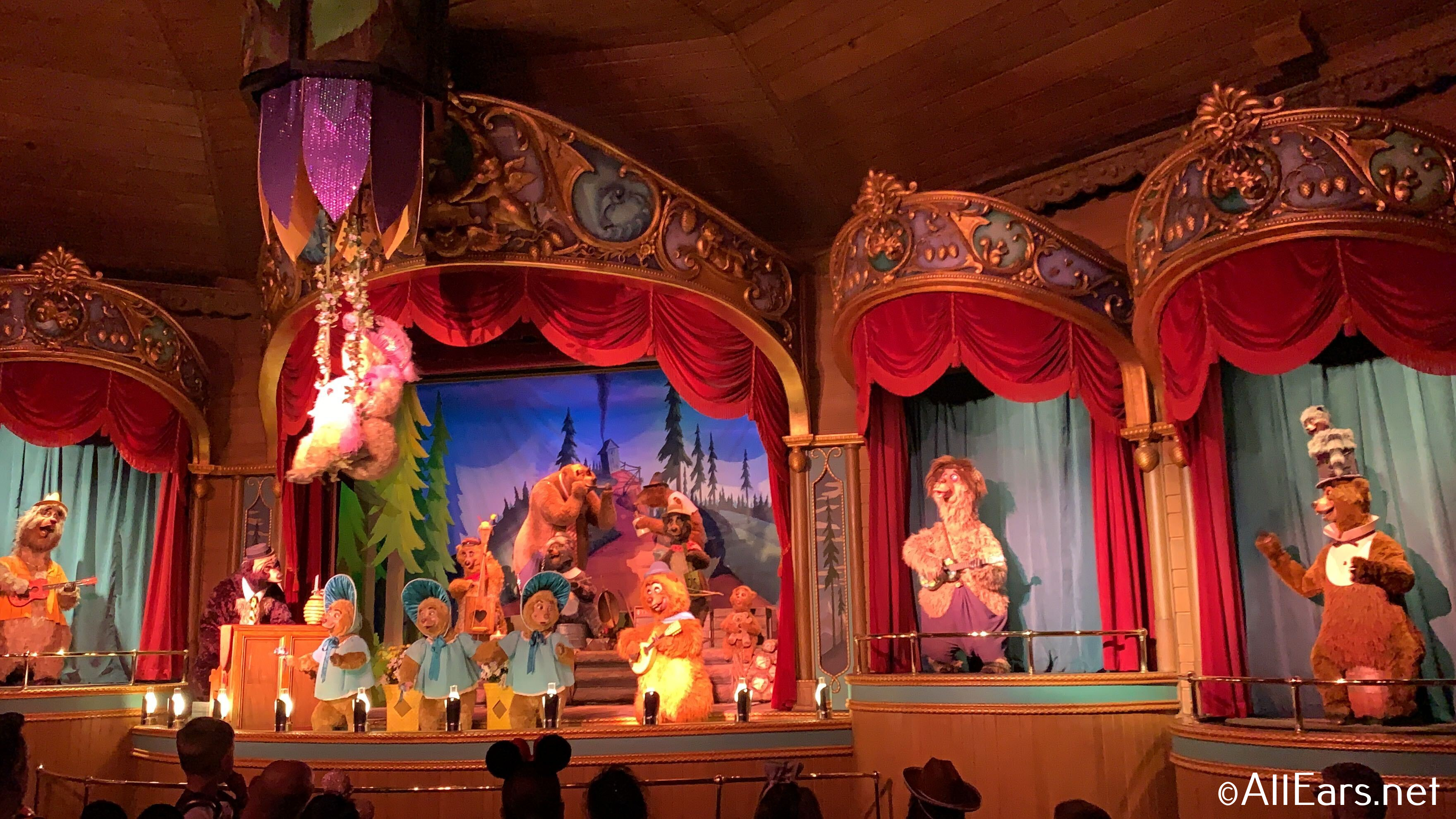 “So clap your hands, and stomp your feet
and try to keep right with us.
One sure thing the bear band’s got
is good old country rhythm.”

Ready for some good ol’ songs of Americana? If so, the Country Bears will entertain you in Grizzly Hall! The Country Bear Jamboree is a theater-style attraction with audio-animatronic characters. Come in for some old-fashioned music — you’ll have a foot- stompin’, hand clappin’ good time! 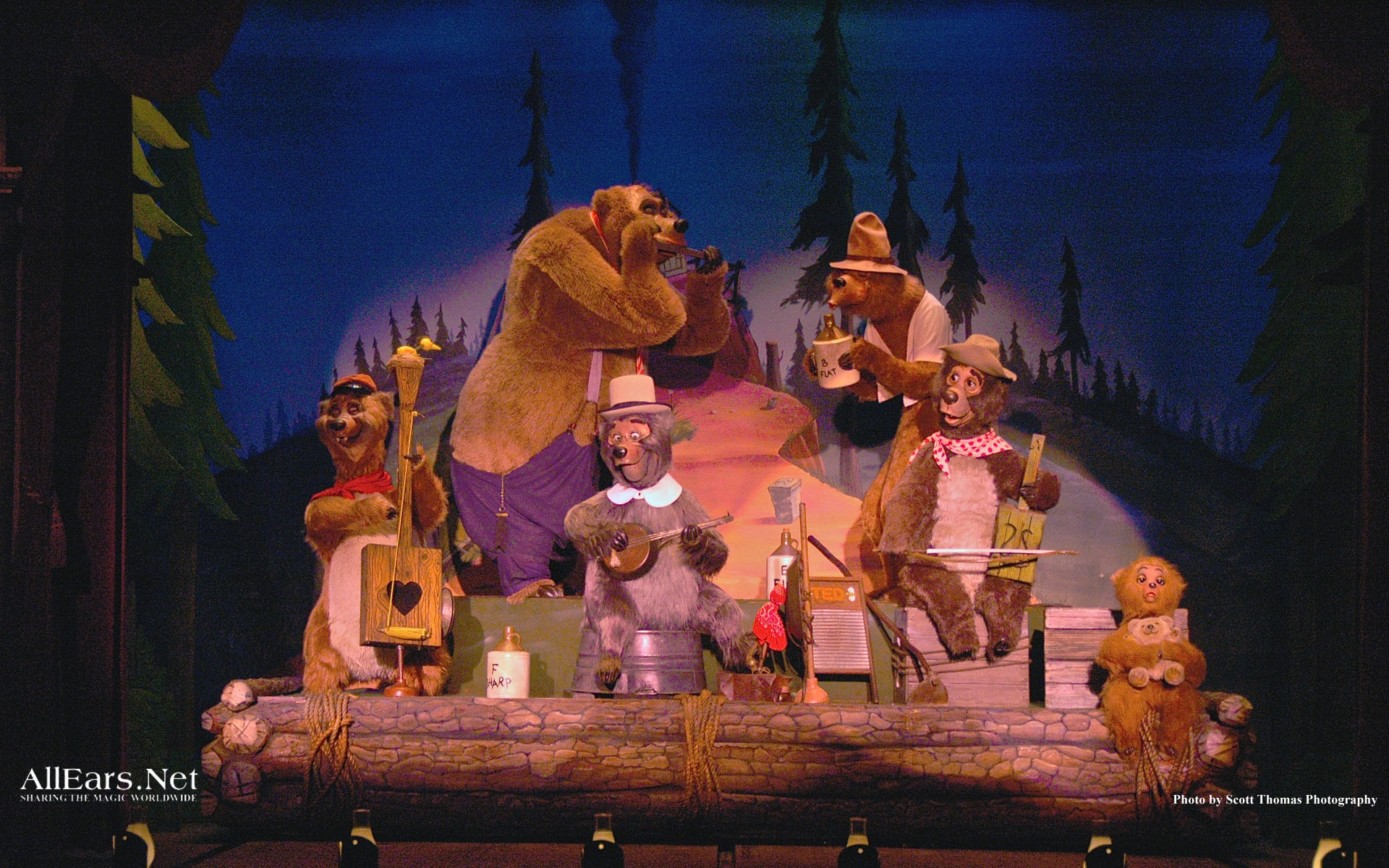 Outside Grizzly Hall you’ll stop a sign that says how many minutes until the next show. You’ll wait inside an airconditioned pre show area, with limited seating and portraits of the bears. 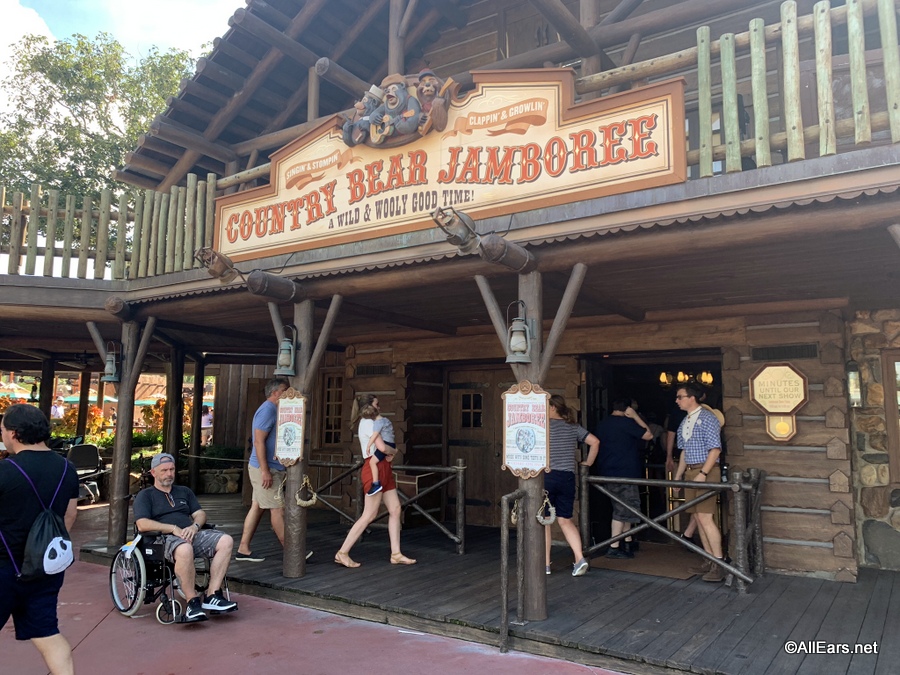 As you enter Grizzly Hall, get ready for 11 minutes of country music. You’ll be entertained by audio-animatronic bears, a raccoon, a buffalo, a buck and a moose! 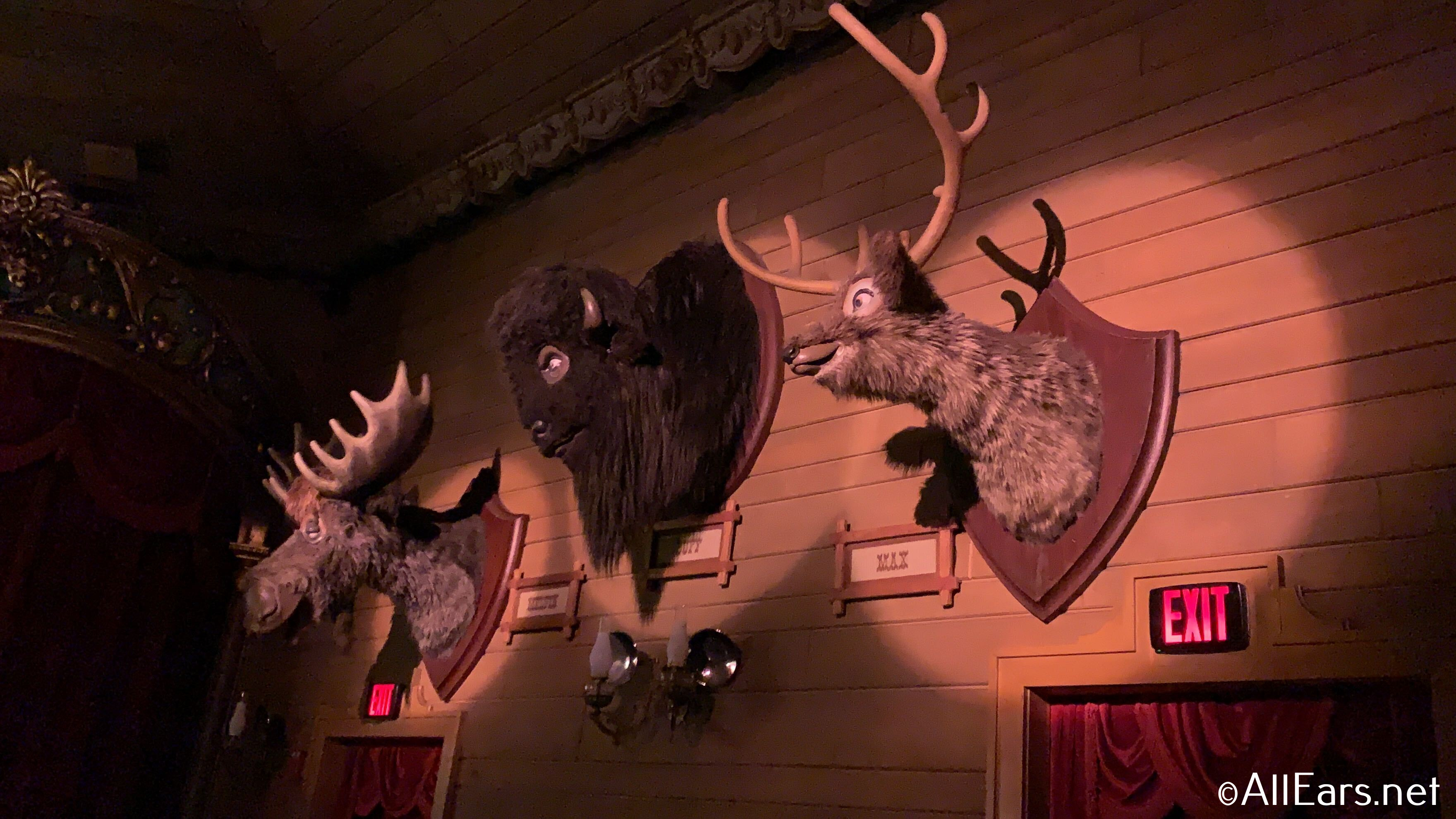 Your greeters for the Country Bear Jamboree are none other than Melvin (a moose), Buff (a buffalo) and Max (a buck). Unfortunately, all you can see of them are their heads, as they are mounted on the wall. 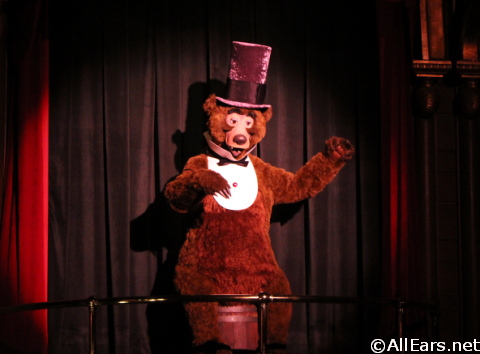 The show is emceed by a bear named Henry, who introduces acts by other bear performers including Big Al, Liverlips McGrowl, Teddi Beara, Wendell, Trixie and Bubbles, Bunny and Beulah, and the Five Bear Rugs, who will entertain you with songs like:

My Woman Ain’t Pretty, but She Don’t Swear
Mama, Don’t Whip Little Buford
Tears Will Be the Chaser for Your Wine
All the Guys That Turn Me On Turn Me Down
Blood on the Saddle
The Ballad of Davy Crockett 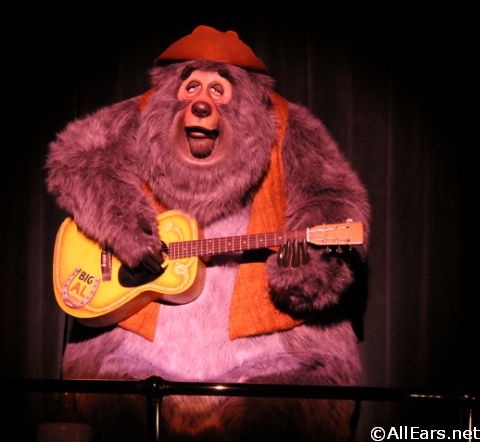 The Country Bear Jamboree is a fun show with lots of laughs that plays to audiences of all ages.

This is a great attraction to see when you want to get out of the sun and off your feet for a spell. The theater is air-conditioned. Plus, your wait time is typically low (under 15 minutes) as you’re just waiting for the current show to finish and clear the theater. 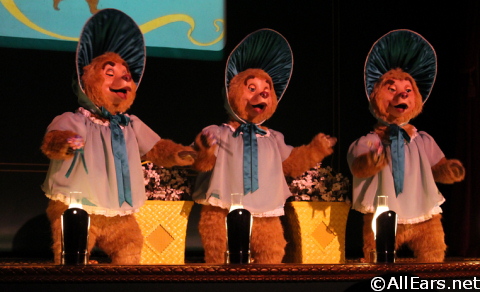 The Country Bears often can be found roaming the park in Frontierland . Be on the lookout for the unadvertised Frontierland Hoedown when the bears and other characters come out to dance with the guests. 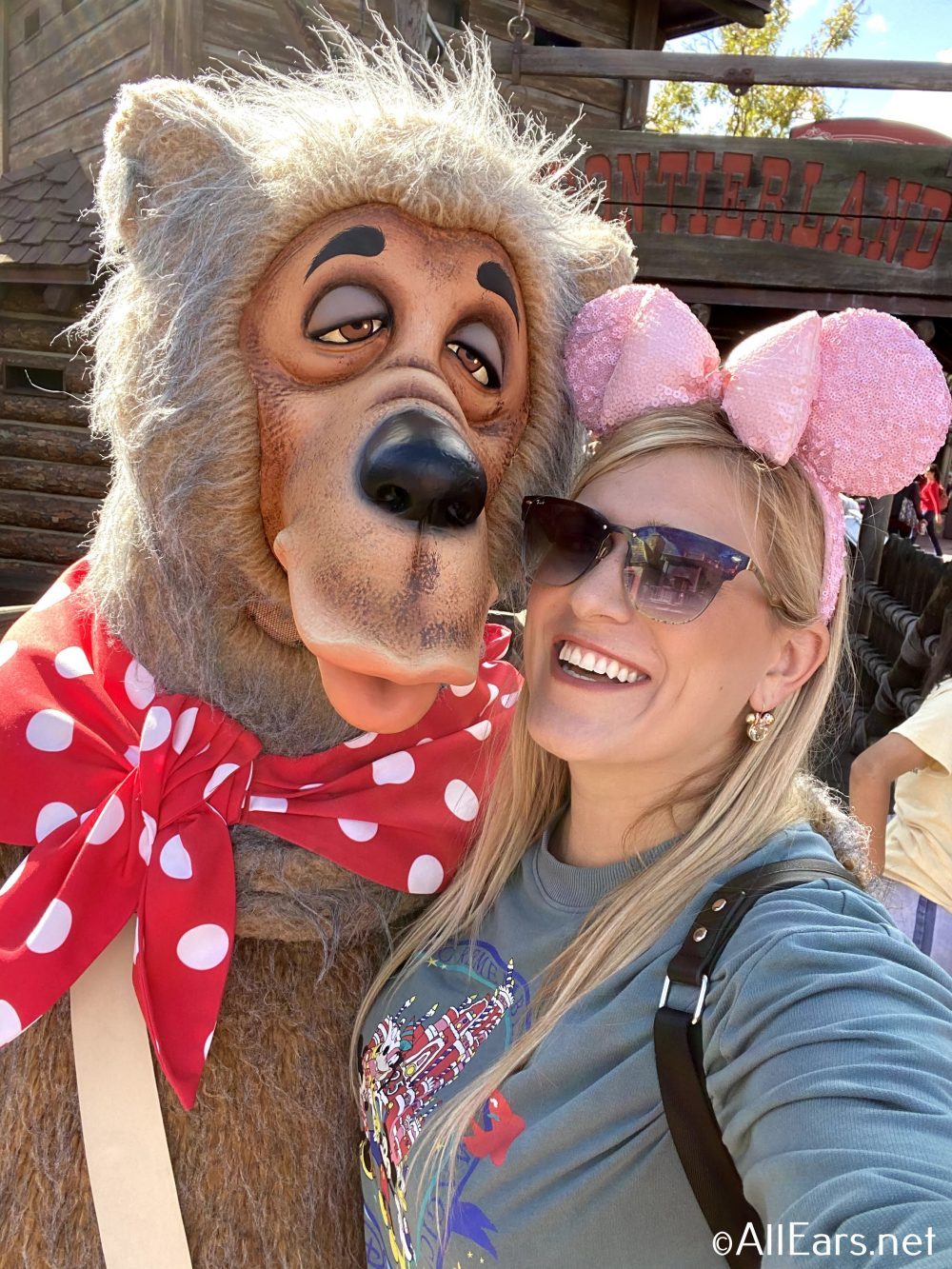 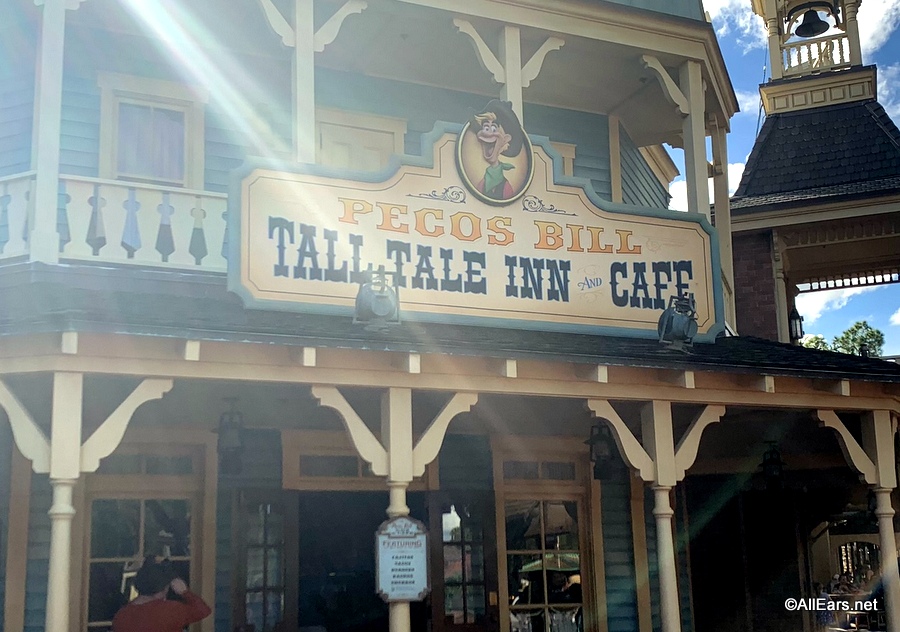 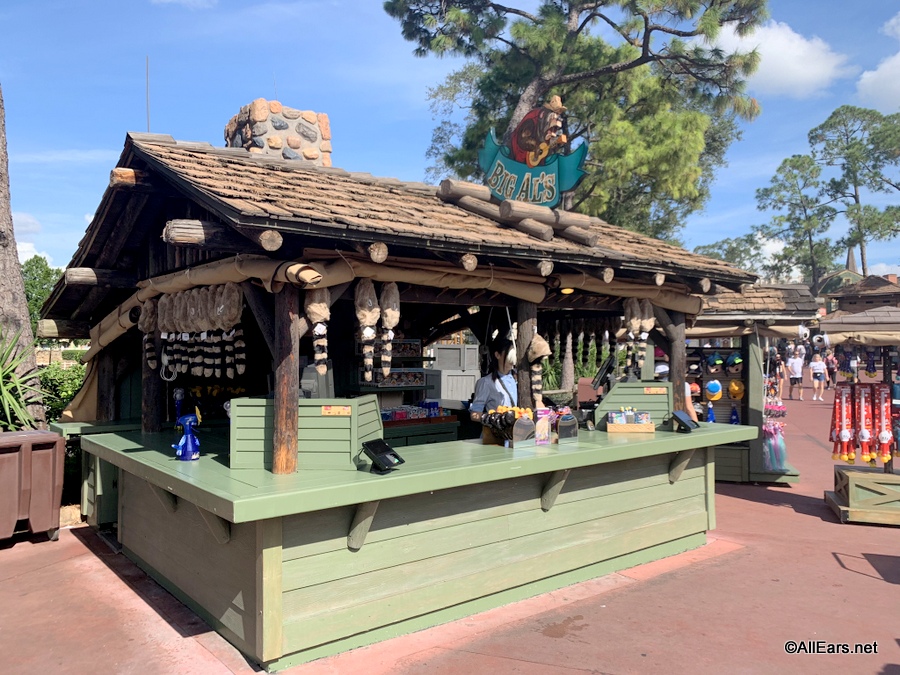 Across from the Country Bear Jamboree is Big Al’s, a log house featuring Disney merchandise, coonskin caps, and ohter souvenirs. You may find a few Country Bear specific items such as shirts or pins,

There was a time, way back when, that as you exited the attraction, Melvin, Buff and Max were on the other side talking to you. 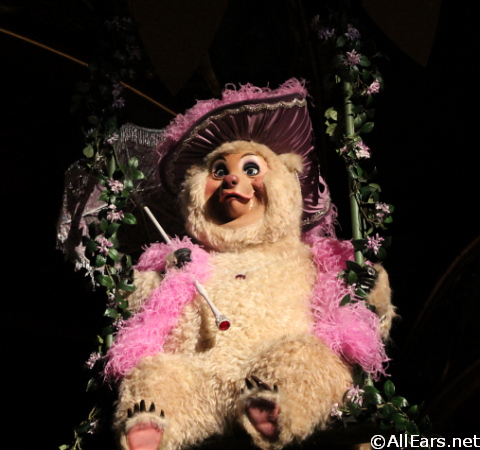 Country Bear Jamboree was one of  last attractions that Walt Disney personally helped to plan.  It was originally developed for a ski resort in Mineral King, California that was never built.

Country Bear Jamboree was the first major attraction to actually debut at Walt Disney World in Florida, and subsequently open at Disneyland and Tokyo Disneyland. The original show was sponsored by Pepsi-Cola and Frito Lay.

Thurl Ravenscroft provided the voice for Buff the Buffalo and Tex Ritter that of Big Al.

The Country Bears movie was released by Disney in 2002, based loosely on the characters found in this attraction.

This show underwent a refurbishment in 2012. When it reopened in October of that year, five minutes had been trimmed from its playing time. 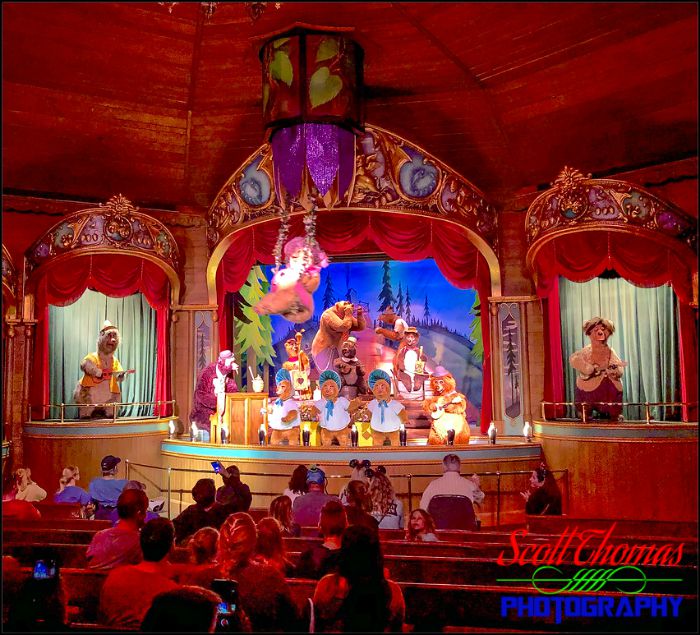