As Auguste Gusteau once famously said, anyone can cook. Even if you’re a talking rat.

So why not try to make some of these iconic (and official) Disney recipes from the AllEars recipe collection? You’ll be bringing some delicious Disney magic home in no time!

Time is immaterial. Distinctions between meal times are meaningless. Make pizza for breakfast.

This breakfast pizza doesn’t come with Mickey Mouse, but it is delicious. Break out the stuffed toys, make one for your kids, and pretend you’re at the Contemporary. Perfect way to start your day (or end it — time doesn’t matter anymore)!

Yield: 6-8 Servings. Or just one if you’re home alone and really dedicated.

Method of Preparation:
Preheat oven to 350º. Scramble two eggs, after cooked place on a paper plate place in freezer to cool down quickly. Once cooled, place in bowl add salt, pepper and mix in half and half. Set aside.

If you don’t like the texture of pre-made Pizza crust, many grocery stores offer premixed pizza dough for a more accurate texture. The benefit of using dough also means you can be a bit more flexible with how the pizza is formed. Make it into the shape of Mickey! Make a sausage stuffed crust! The sky’s the limit!

You can also mix up the recipe; the heart is the three cheese blend and half-and-half, which provides the perfect stage for your toppings; so long as you have that, you can basically dress it however you want. If you’re more of a chorizo gal, swap out the bacon. Vegetarian? Throw on your favorite vegan sausage!

Skipping from breakfast directly to dessert, we’ve got one of the most delicious and decadent treats Disney has to offer: ‘Ohana’s signature bread pudding! You’ll never look at bread (or pudding) the same way again!

Method of Preparation (For the Pudding)

1. Combine sugar, brown sugar, corn syrup, butter and half of heavy cream in a large pan. Bring to a boil and slowly add remaining heavy cream keeping mixture at a steady boil.

While the sauce is key to an authentic experience, you can substitute it with a store bought maple syrup if you’re not comfortable making a flambé. Bananas Foster flavored ice cream is also available at many supermarkets. Also, feel free to experiment with other types of bread! One potential hack: using King’s Hawaiian Rolls as the base. Not only are they available at nearly every deli and grocery store in the country, but they bring a soft and fluffy texture to the dish. 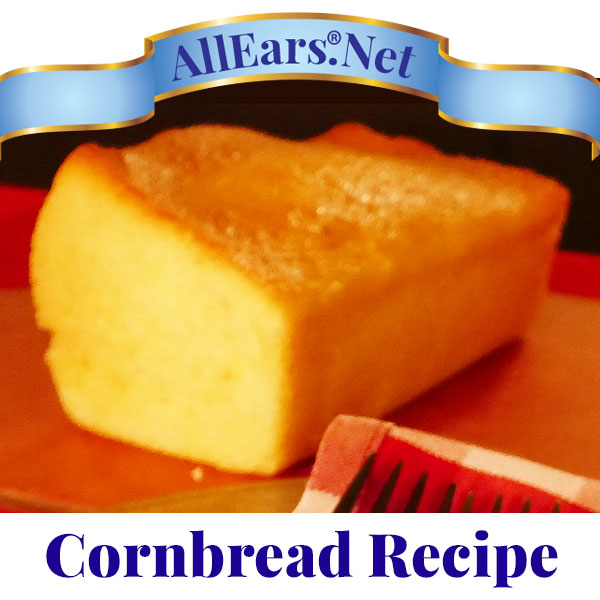 Few sides are as deceptively simple as cornbread. The classic accompaniment to chili, fried chicken, barbecue, or… anything, really. This variation on the classic side comes from the Hoop-De-Doo Revue, where the only thing more corny is the show!  The one ingredient you’ll need that you probably don’t already have is cornmeal.

2. In a separate bowl, blend milk, eggs, and oil with a mixer.

3. Using that same mixer, slowly add the blended liquid to the dry ingredients prepared in step 1, mixing just enough to incorporate the wet and dry ingredients.

4. Spray a 9 x 13 baking pan with nonstick food spray and pour the batter into the pan, spreading evenly.

Cornbread is a versatile recipe, and while there is a bit of magic in using Disney’s recipe, it’s pretty basic. Feel free to experiment with the cornmeal to flour ratio. If you prefer your cornbread sweeter, mix in some brown sugar and honey, and swap the plain milk for buttermilk. Like yours with a kick? Mix in some pepper jack and jalapeño peppers! And if you buy corn bread/muffin mix that already has a rising agent and salt, skip those in the recipe above.

For some reason, people just love hotel cookies. There’s a recurring urban legend about how the cookie recipe from some famous hotel was stolen or leaked, and now it’s ended up in your email chain! Well, this one isn’t stolen; we really do get all of our recipes from official sources.

1. Preheat oven to 330℉.
2. Sift flour, baking soda and salt into a large bowl and set aside.
3. Combine butter, brown sugar and powdered sugar in a separate bowl and cream with electric mixer until fluffy.
4. With mixer running, add eggs, one at a time, then add vanilla. Mix until combined, scraping sides of bowl.
5. Slowly add flour mixture, scraping sides of bowl. Stir in chocolate chips.
6. Scoop 1 tablespoon dough for medium cookies and 2 tablespoons for large onto ungreased baking sheet.
7. Bake until light golden, 10 to 12 minutes for medium cookies, 12 to 14 minutes for large.

Like the Hoop-De-Doo Cornbread, this one is fairly basic. A lot of the signature flavor comes from the use of brown sugar and vanilla extract. With that in mind, feel free to experiment with other kinds of chocolate chip. Or, you can try mixing in some nuts for a crunchier experience!

Ah, the Dole Whip… the classic Disney dessert. No trip to Disney is complete without one of those frozen treats. Now, unfortunately, this isn’t a 100% accurate recipe because most people don’t have soft serve ice-cream makers.  If you do, in fact, happen to have an ice cream maker, you can just get a huge sack of Dole Whip mix on Amazon. But this isn’t an article encouraging you to make irresponsible financial decisions, so with that in mind, here’s Dole’s official Copycat Recipe.

The banana and coconut milk are what gives this treat its creamy texture and flavor, though it won’t quite match up to the parks. It’s basically banana ice cream with pineapple juice in it. Knowing that, you can actually do some pretty wild experiments. If you prefer Orange or Mango Dole Whips, just substitute your favorite fruit juice. You could also top it with candy, or make it with real pieces of real fruit. If you prefer the float variation, use it to top a glass of your favorite pineapple juice, orange juice, or lemonade.

If you’d really like the classic Dole Whip swirl, use a piping bag (available in the baking aisle) to dispense the Whip into bowls or cones.

So, what do you think? Will you try any of these recipes? Is there one we missed? Let us know in the comments!

Get more of your favorite Disney recipes at the links below!