Pirates of the Caribbean Highlights: 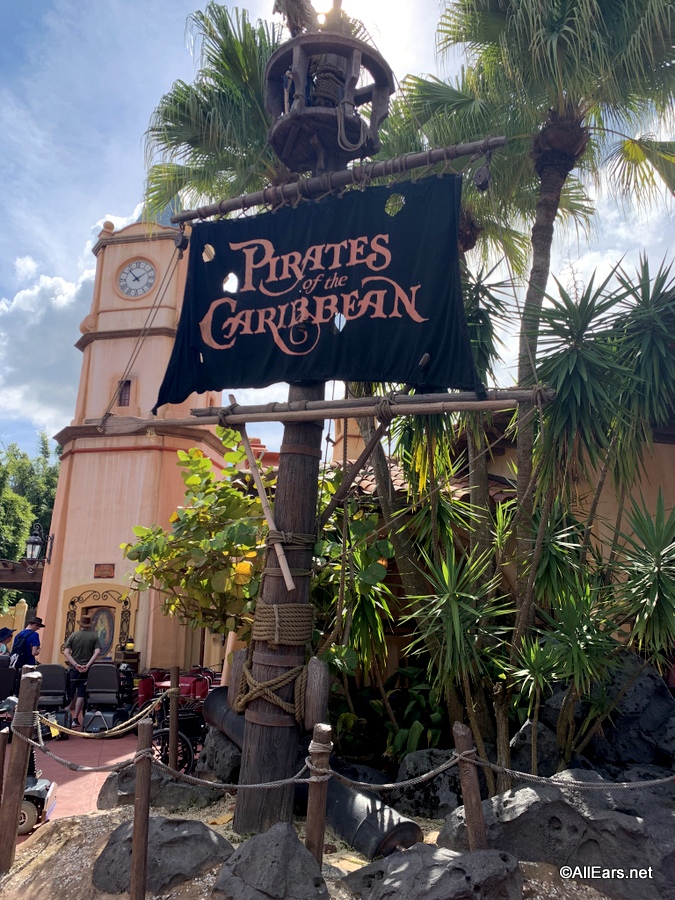 Yo Ho! Yo Ho! A Pirates Life for Me! Travel back in time to when Pirates ruled the waters! Pirates of the Caribbean is located in Adventureland, in the Caribbean Plaza, just past the Jungle Cruise. 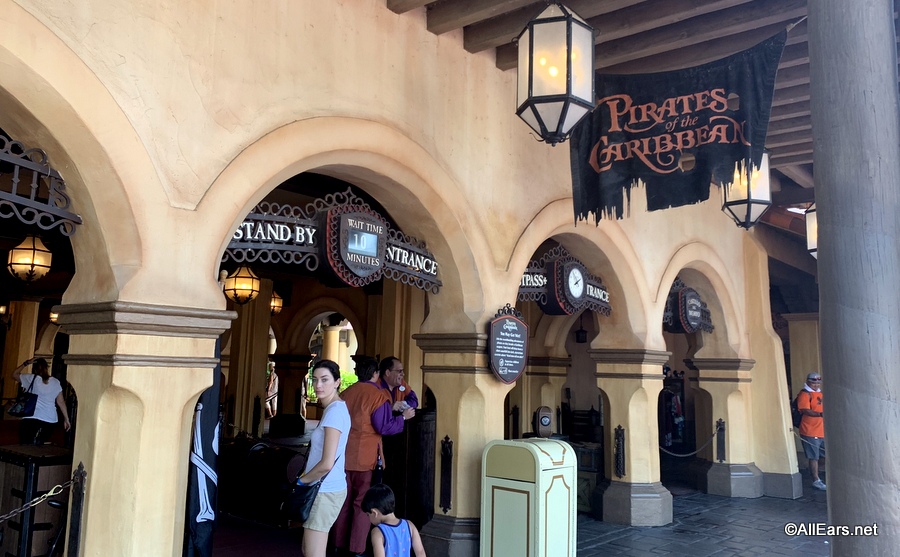 PIRATES OF THE CARIBBEAN — As you enter the attraction, the walkway to the boats is long and winding with LOW lighting. Be sure and take a look at the theming inside the queuing area. 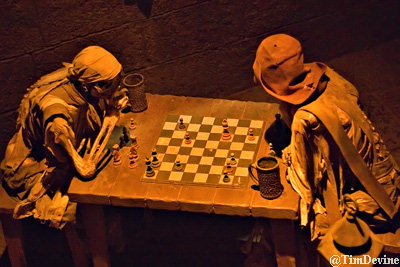 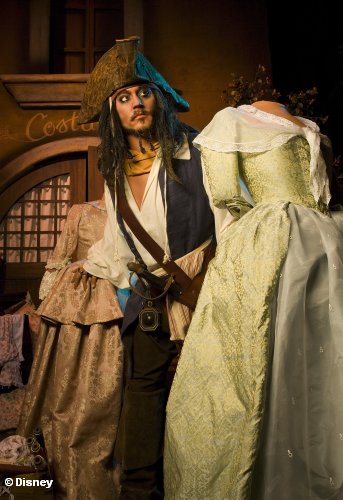 You’ll find boisterious pirates drinking and looting and having a good time. Travel through the pirates’ grotto, the galleon with Captain Barbossa, the town square, burning city and the dungeon. Remember “Dead Men Tell No Tales!” 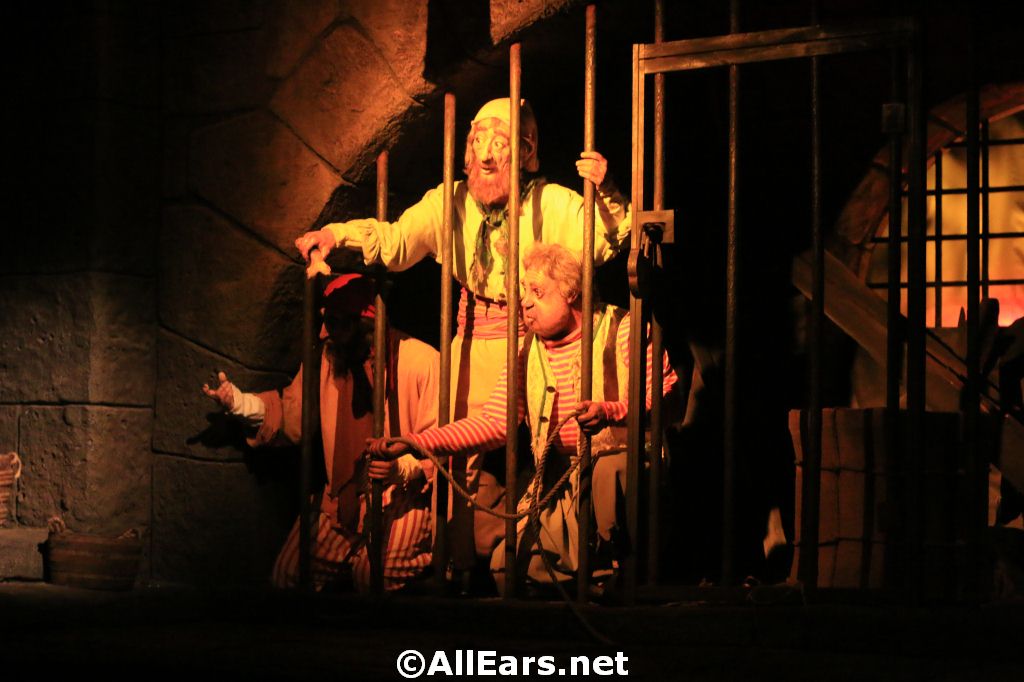 The eight-and-a-half minute ride is over way too quickly! There’s lots to see with 125 Audio-Animatronics figures, including 65 pirates and villagers and 60 animals and birds.

Read about Disneyland’s version of this classic attraction HERE.

This is a classic Walt Disney attraction and should not be missed!

Lighning Lanes access for Pirates of the Caribbean is available with the purchase of Genie+. The standy wait time generally ranges from 30 to 90 minutes.

This is a great attraction when it’s hot outside since most of the queue is indoors.

There is a small drop (14 feet) in the beginning of the ride.

Disney PhotoPass Service is now taking photos of guests at Pirates of the Caribbean. As you prepare to exit a haunted grotto, a Disney PhotoPass camera will capture your image, which will be automatically associated to your My Disney Experience account if you are wearing an active MagicBand. Your photo can be viewed at MyDisneyPhotoPass.com and in the My Disney Experience mobile app, where you can download or purchase it. 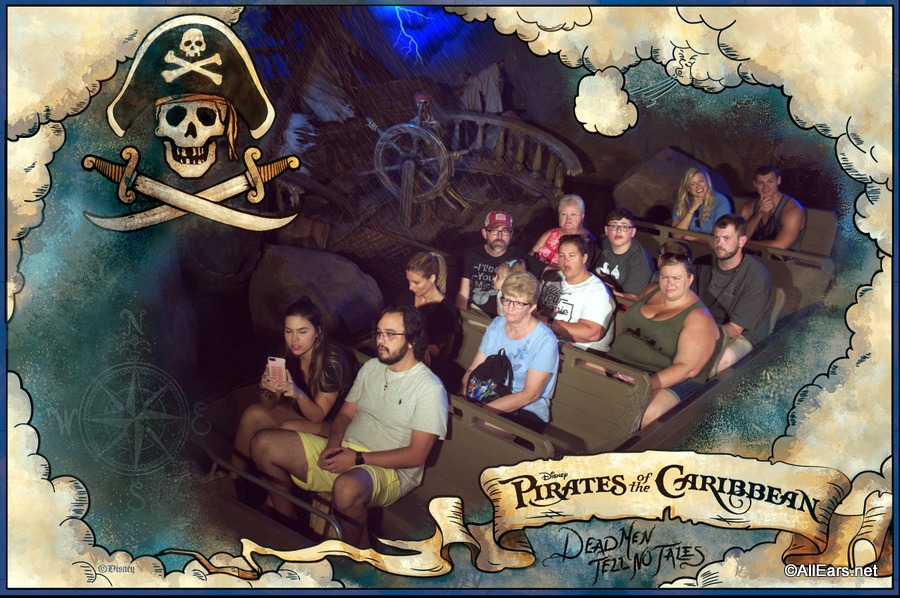 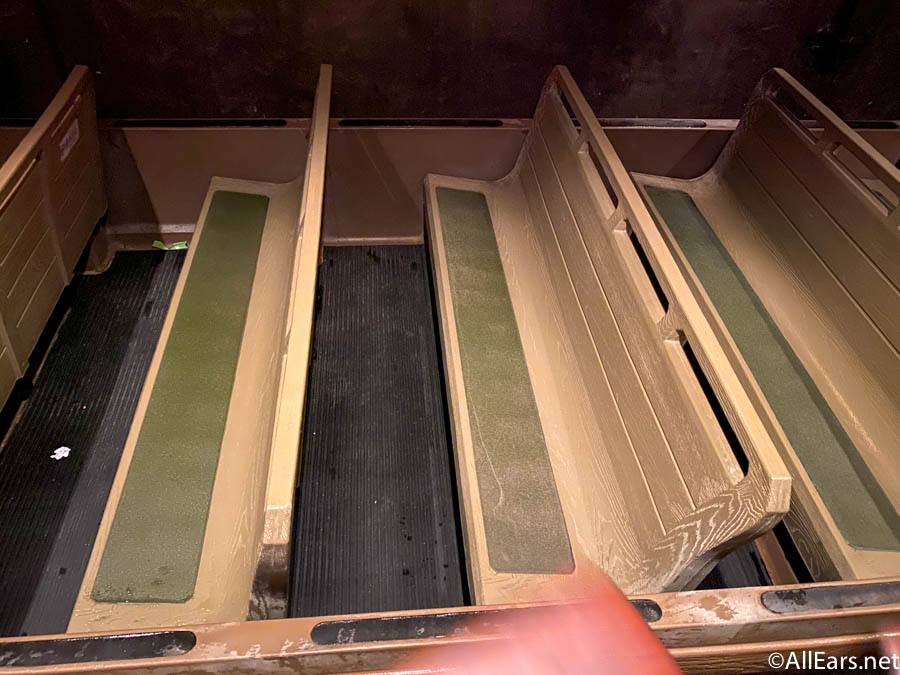 Kids may be nervous as the first scene of the attraction is a dark grotto with a skeleton pirate captain, followed by a short drop “back in time” to the era of the living pirates. Assure them silly and fun pirates are on the way! 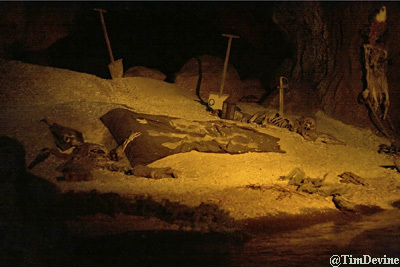 Jack Sparrow himself can be often found greeting guests outside the attraction! 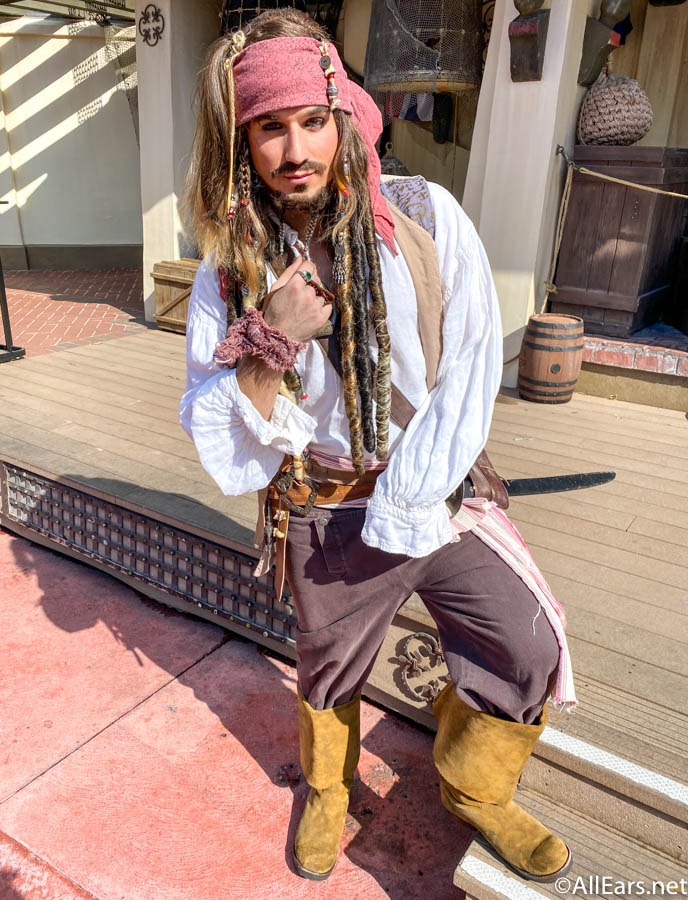 Make sure to check a times guide or the My Disney Experience App for character meet and greet times.

You exit the attraction into the Plaza del Sol Caribe Bazaar, where you’ll find lots of Pirates of the Caribbean and Pirate themed. merchandise. Also nearby is La Princesa de Cristal with art and collectibles. 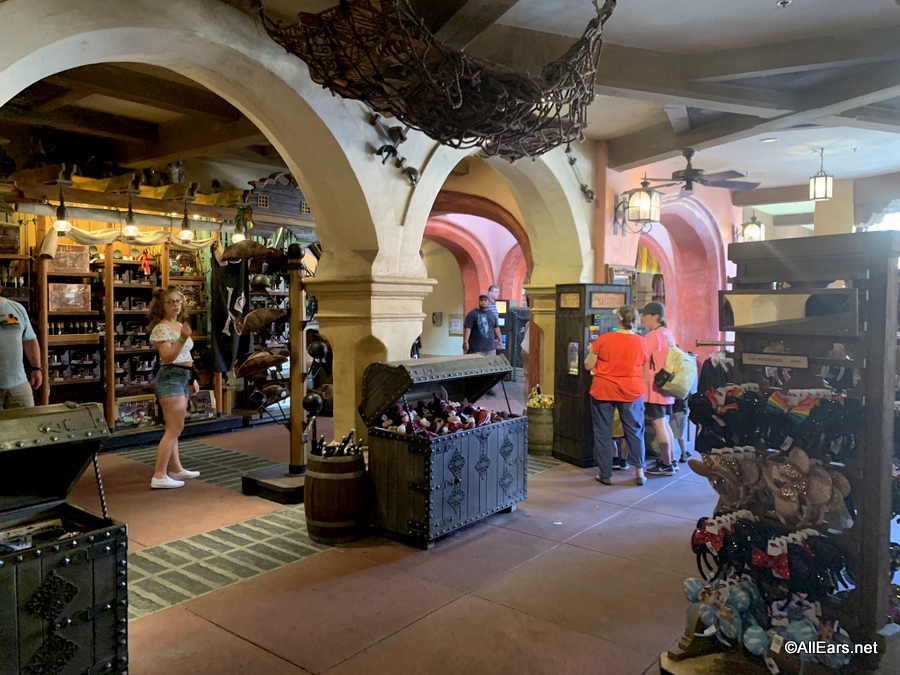 In the late 1950s, Walt Disney introduced the concept of a pirate adventure to his staff at Walt Disney Imagineering. Like so many other of his ideas, it was far ahead of the current technology needed to achieve the desired effects. It was not until the mid 1960s that the show moved closer to reality. Pirates of the Caribbean opened at DISNEYLAND® Park in New Orleans Square in February, 1967 and in Walt Disney World on December 15, 1973.

The flat-bottomed boats are propelled by jets of water. Lift pumps in the staging area create a current that carries the boats through the channel.

There are 4 cannons on the roof of the attraction and 15 inside. They were all manufactured by Walt Disney Imagineering (WDI).

The drawbridge at the entrance to the Pirates of the Caribbean is non-operational.

The waterfall may be 52 feet long, but the actual drop is only 14 feet.

Hidden Mickey Alert: Treasure Room — iron work on the bottom of four lamps on the left side, one located on each of two columns and two more located on either side of the archway walls.

“Yo Ho (A Pirate’s Life For Me),” music by George Bruns, lyrics by X. (Xavier) Atencio.

The black pirate flag, which flies just outside the entrance to the attraction, features a white skull and crossing swords. This type of flag is representative of ones flown by Caribbean pirates from the 1500s to the early 1800s and holds no additional special significance.

As of the 1700s, pirates began using flags sporting a variety of symbols to include the skeleton, flaming swords, and the hourglass. The most popular design was that of a white skull and crossbones on a black background. This symbol is known as the Jolly Roger.

Paul Frees voices many of the rogues in the attraction. Guests can also hear him as the Ghost Host in The Haunted Mansion. X. (Xavier) Atencio also voices the warning prior to the waterfall drop in the attraction.

In 2018, Disney Imagineers updated a famous scene in the Pirates of the Caribbean during a refurbishment. The well-known “Redhead,” who was on auction as part of the attraction’s Mercado scene, has now switched sides to become a pirate named Redd, who has just pillaged the town’s rum supply and has something to say about it. 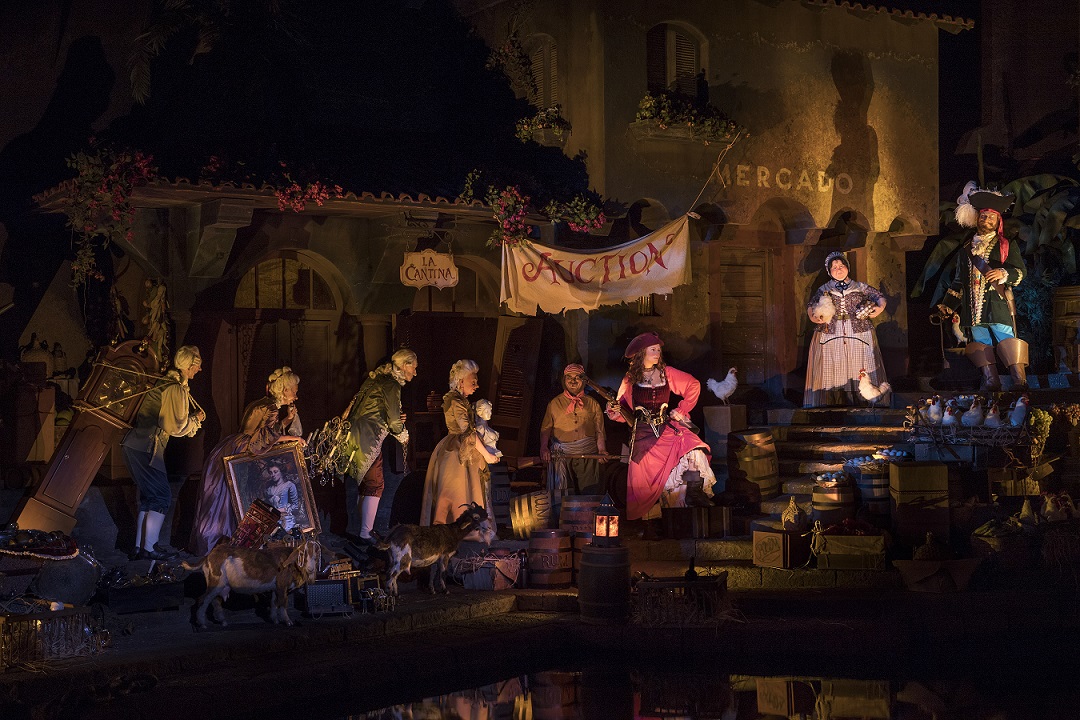