Follow an Audio-Animatronic family through the last century, as they show how times have changed due to the many modern inventions. Located in Tomorrowland, Walt Disney’s Carousel of Progress has a rich history that marks it as one of the oldest attractions in Walt Disney World. 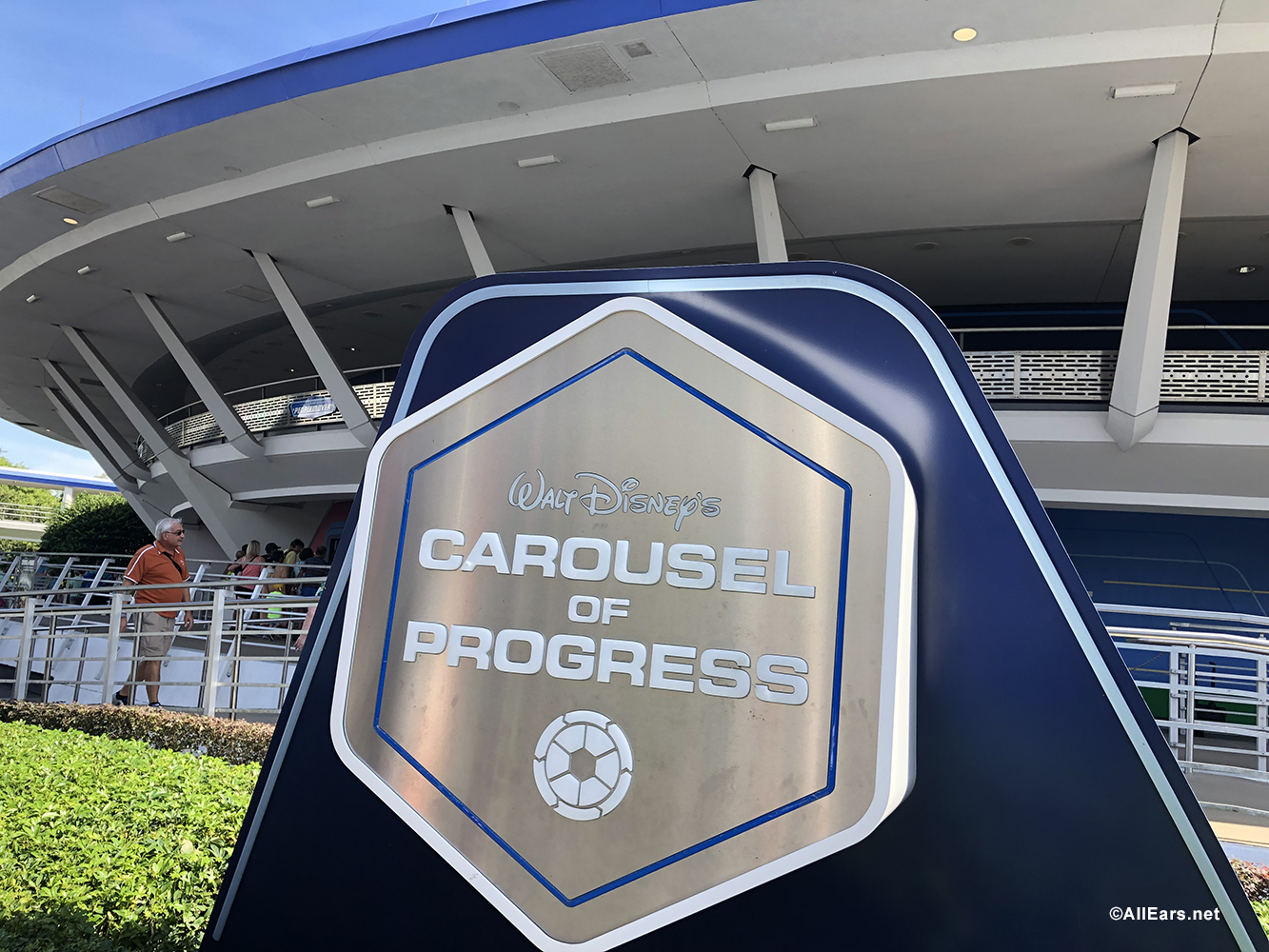 Walt Disney’s Carousel of Progress — Through a rotating carousel theater, this attraction carries seated guests into the homes of four generations of the same family from the days before electricity to the present day. 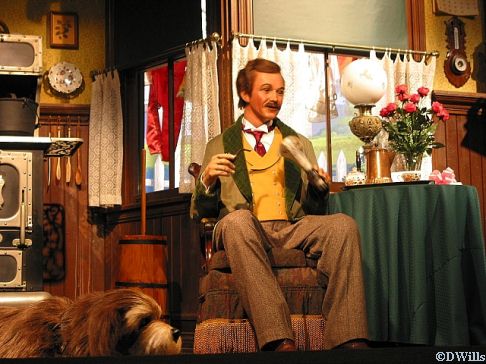 After a brief introduction, your theater rotates to reveal Act I, set on Valentine’s Day around the turn of the century. After our host, John, tells the audience about the current state of modern conveniences — all pre-electricity — the theme music, “There’s a Great Big Beautiful Tomorrow,” plays as the theater rotates again. 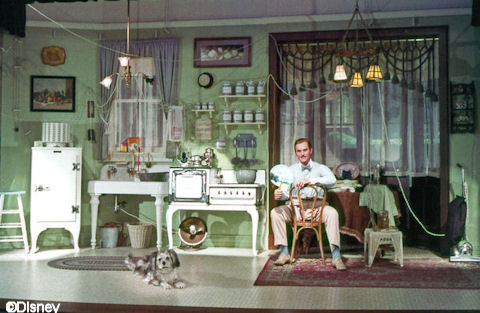 Act II brings us to the 1920s, and we see the family preparing for the Fourth of July celebration. The father shows off all the new electric-powered conveniences, including the vacuum, electric lights, oven, and refrigerator (subsequently blowing all the fuses out in the neighborhood). Among the many other inventions spotlighted, we also see the son, Jimmy, listening to radio, on which we hear a John Philip Sousa march, and we hear about “air cooling”, a fan blowing over a block of ice.

In Act III, the John of the 1940s tells us that he’s entered the “Rat Race” by living in the suburbs and commuting to work. We also see the benefits of his new refrigerator, television and, most importantly, indoor plumbing. 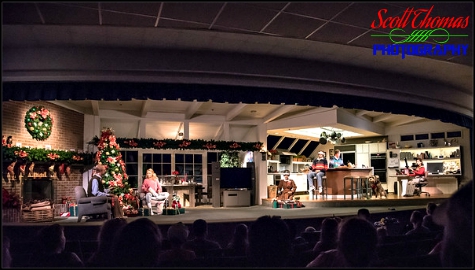 The theater turns one more time to reveal Act IV, with the family celebrating Christmas on the eve of the new century. The family’s automated oven manages to burn the Christmas turkey to a crisp and the show concludes with a final rotation into the Finale, from which the audience is dismissed.

There is seldom a long wait, and it is well worth the time to see this piece of Disney history at least once! It is also a good place to take a break, as you are seated in comfy, dark air conditioning.

Accessibility: Guests using a wheelchair/ECV may remain seated during this show. Audio description and handheld captioning are available.

Assistive Listening Devices from Guest Relations Can Be Used Here. 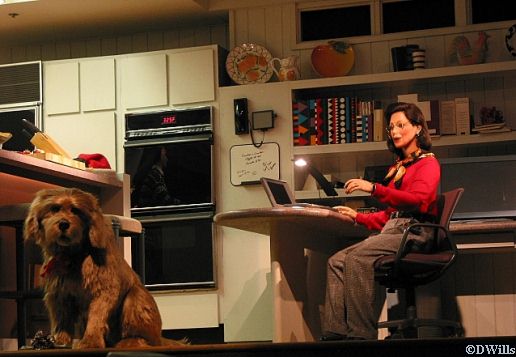 The Carousel of Progress opened in Walt Disney World’s Magic Kingdom on January 15, 1975.

Designed and Manufactured by: WED (now known as Walt Disney Imagineering or WDI) and MAPO (previously known as the manufacturing division of WDI)

General Electric served as the corporate sponsor from 1964 until March 10, 1985.

Building Exterior: At both Disneyland in California and at the Magic Kingdom at the Walt Disney World, the exterior was originally painted in white and deep blue stripes that grew larger and then smaller as the carousel rotated. There were 276 stripes of each color. In 1993, with the rejuvenation of Tomorrowland, Walt Disney’s Carousel of Progress was given a covering of large and colorful sprockets and bolts to fit in with the theming of Tomorrowland.

Music: The following two theme songs were featured in the attraction and were both written by Richard M. and Robert B. Sherman, who composed the music for many favorite Disney films such as Mary Poppins:

“The Best Time of Your Life” – Featured as the theme song with the opening of the attraction at the Magic Kingdom Park in 1975.

“There’s A Great Big Beautiful Tomorrow”- Current attraction theme song at Magic Kingdom (featured as the theme song for the original attraction at the 1964 World’s Fair and the Disneyland attraction).

Rover (dog) has gone through many changes in the history of the attraction. His color has changed from white (at the World’s Fair) to light brown and dark brown. His name has even changed, and has been Buster, Sport, Queenie, and Rover. When the attraction reopened at the MAGIC KINGDOM at the WALT DISNEY WORLD Resort, his name was different for every scene. Today, the dog’s name is Rover throughout the entire show. In this most recent version, Rover has been given new life and is the most realistic version ever seen. 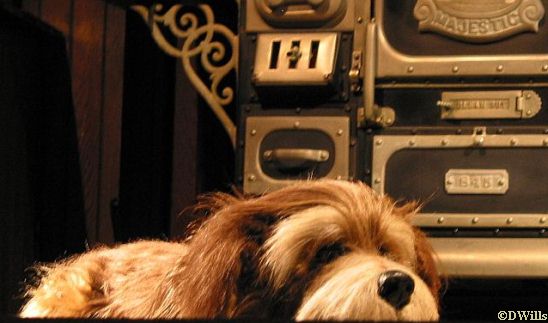 Voices: The following Audio-Animatronics characters, along with their voice credits, appear in Walt Disney’s Carousel of Progress attraction:

Jean Shepherd, Father’s current voice, was a contemporary American humorist. Guests may recognize him as the narrator from “A Christmas Story.” Shepherd also provides the opening and closing remarks of the current attraction.

Rex Allen, the current voice of Grandpa, was the original voice of Father in the 1964 World’s Fair version.

Janet Waldo, Grandma in Act IV, previously served as the voice of Judy Jetson on the popular 1960s television cartoon, “The Jetsons.”

Debi Deryberry was the voice of Jimmy Neutron on Nickelodeon.

Mel Blanc is also known as the voice of Warner Brothers’ cartoon character Bugs Bunny. Noel Blanc is the son of Mel Blanc. 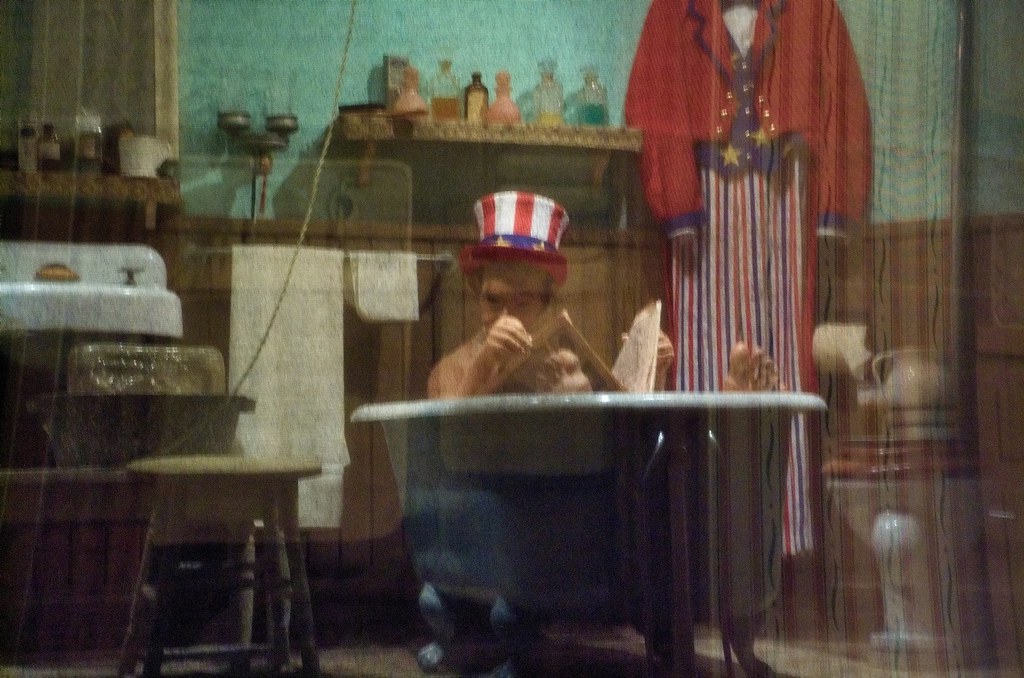 Hidden Mickeys: There are four Hidden Mickeys in the final scene. Mickey appears as a nutcracker on the fireplace mantel, a plush peeking from a present, a white peppermill on the kitchen counter, and an abstract painting on the dining room wall.

History (from Official Walt Disney World information): Walt Disney’s original concept for the World’s Fair was “a show that would interpret, in an educational and entertaining way, the role electricity has played in bettering man’s living conditions.” By 1959, General Electric was sponsor of the proposed attraction, which would consist of a series of stages depicting electrical history through which people would walk.

1964-65 New York World’s Fair: The result of the collaboration with GE was “Progressland,” one of the most successful and exciting exhibits at the 1964 World’s Fair. At the New York World’s Fair in 1964, as many as 4,500 people per day enjoyed the Progressland show. The widespread enthusiasm for it was astounding, for almost 16 million visitors saw the show. After viewing the show inside, Guests went upstairs to view Progress City. This 160 foot, scaled model was built at 1/8 inch to the foot. It occupied 6,900 square feet of space, using 22,000 scale trees and shrubs, 4,500 structures lit from within, and 1,400 working streetlights about one inch tall each. Progress City was Walt Disney’s model for EPCOT (renamed to Epcot). Progress City can still be viewed from the Tomorrowland Transit Authority Peoplemover at the Magic Kingdom. When the New York World Fair closed, the Carousel of Progress was moved to Disneyland where it, and the original music, played from 1967 thru 1973.

Disneyland: In order to extend and preserve the show permanently, GE brought it to Disneyland in 1967. The G.E. Carousel of Progress in Disneyland was a two-level pavilion which could be seen by up to 3,600 people per hour. The first level contained the same basic acts. However, at the end of Act IV, guests stepped onto a “speedramp” that carried them to the pavilion’s second level. There they viewed Progress City, Walt’s model of EPCOT (renamed to Epcot). During its six year run at Disneyland Park, more than 31 million people saw the show.

Walt Disney World: In 1973, it was then moved to a new theater at Walt Disney World, opening in 1975 with a new theme song, “The Best Time of Your Life.” A 1993 rehab returned the original show music, “There’s a Great Big Beautiful Tomorrow,” which still plays.

July 1967 until 1973 – Relocated to Disneyland and named ‘Carousel of Progress’.

1994 – The attraction was refurbished to its original state and renamed “Walt Disney’s Carousel of Progress.” At this time, it was redone as a tribute to the original attraction. The theme song was changed back to “There’s a Great Big Beautiful Tomorrow,” and the story recreated as a tribute to the nostalgia of the past. 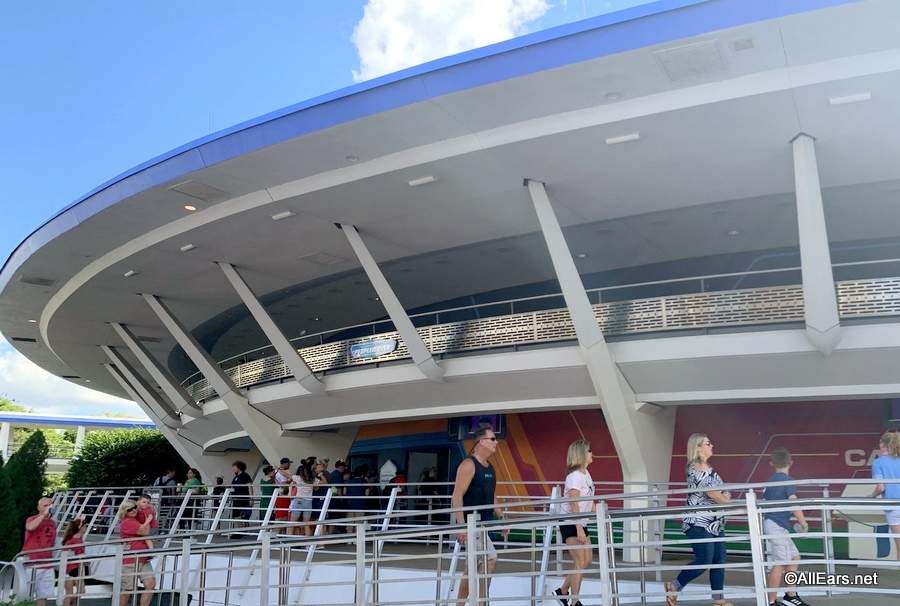