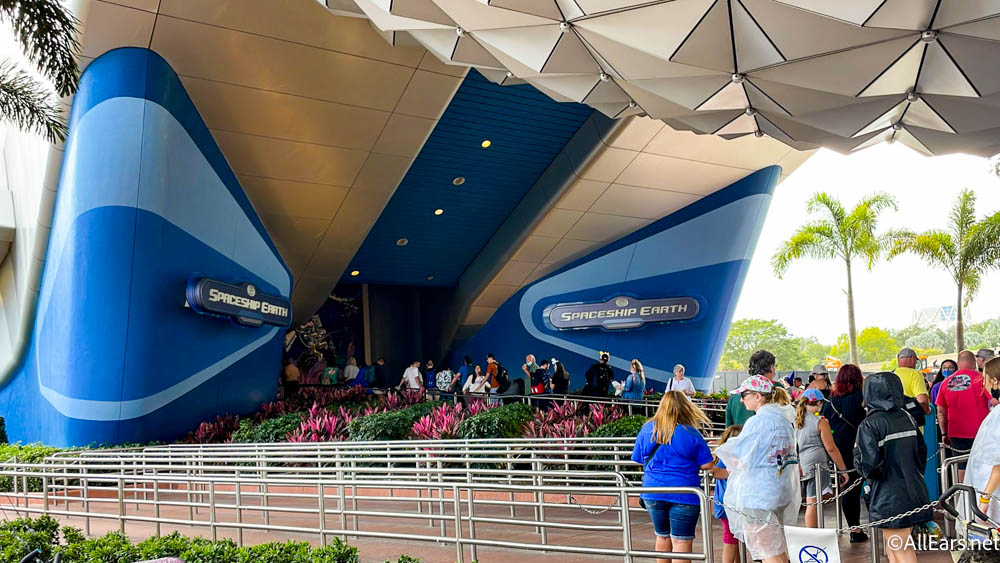 “Journey with us now to the dawn of recorded time…”

You can’t miss it! The shimmering geosphere that houses Spaceship Earth is visible from the road before you even get to the parking lot. Spaceship Earth is the story of communications throughout the ages — where we have been and where we are going. It is the Icon of EPCOT, towering 180 feet above the park. Spaceship Earth – Learn about the history of communications from cavemen to future centuries. The voice of Academy® Award-winning, English actress Dame Judy Dench guides you through this gentle 16-minute ride.

As you journey though the superb Audio-Animatronic scenes, your seats eventually rotate to reveal a glorious star-filled night sky. You continue your trip backwards passing through the future.

Some scene highlights include: the New Kingdom of Egypt where the papyrus was invented, 9th century BC Phoenicians invent the alphabet, Renaissance in Italy, the Sistine Chapel Ceiling, Ancient Greece, Dark Ages and Destruction of Rome, the Age of Enlightenment, and the invention of the printing press. As your journey comes to an end, the narrator notes: “We all share the common bonds of hope and sorrows and dreams and joys.”

Ten time Emmy®-award winning composer Bruce Broughton conducted a 63-piece orchestra and 24-voice choir for a new musical score for Spaceship Earth at Walt Disney World Resort. For the musical score, each scene was infused with musical styles and instruments appropriate to the time period, which was not an easy task according to Walt Disney Imagineering senior show producer Bob Zalk. “To have that score transition smoothly as vehicles travel from one time period to the next is extremely difficult,” he said. “The first time we rode through the attraction accompanied by that music, we were amazed.”

EPCOT Attractions At A Glance 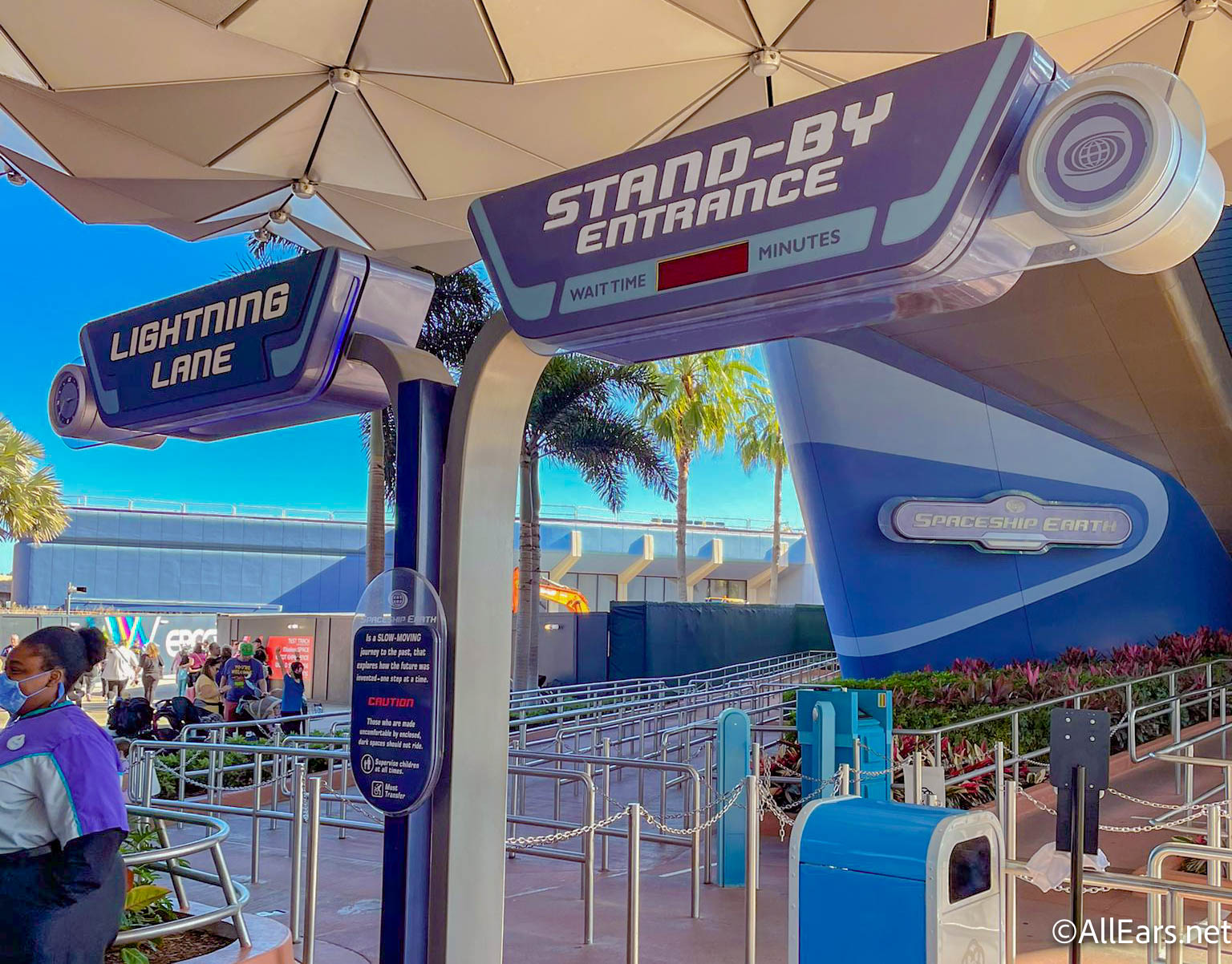 It is one of Epcot’s premiere attractions and is NOT to be missed.

Accessibility: Wheelchair guests should see the Cast Member in front of the attraction. You will then be taken to another area to board the ride vehicles. Guests must transfer to a standard wheelchair, and then guests need to transfer from the wheelchair to a ride vehicle.

Audio Description and handheld captioning are available.  Due to the nature of the experience, Guests with service animals should check with a Cast Member at the attraction for boarding information.

Portions of Spaceship Earth are very dark. For the last third of the ride your vehicle will be backwards, rotating to face forward just before you exit.

On occasion, your “time vehicle” may stop momentarily. This usually is to allow persons in wheelchairs to transfer in and out of the ride vehicle.

Make sure to mention the priceless moment when your toddler sees the SpaceShip Earth for the first time, and how their eyes light up and they start pointing and squealing. It is a great photo opportunity. (David Reich)

Portions of Spaceship Earth are very dark. Small children may be anxious and should be warned to stay seated.

EPCOT Characters At A Glance
Character Meet and Greet FAQ!

There is no place to eat in the immediate vicinity of Spaceship Earth. The nearest Quick Service option is in The Land pavilion at Sunshine Seasons. For Signature Table Service, make an Advance Dining Reservation for Space 220 in World Discovery’s Mission: SPACE pavilion.

The geosphere is 165 feet in diameter and weighs 16 million pounds. It encompasses 2.2 million cubic feet of space and has an outside surface diameter of 150,000 square feet. It is covered by 11,324 triangular panels and held aloft by 6 support legs that are sunk over 100 feet into the ground.

Science fiction writer Ray Bradbury and a host of other consultants and advisors worked with the Disney Imagineers to develop Spaceship Earth.

The hieroglyphics on the walls in the ancient Egyptian scene of the attraction are authentic recreations of actual hieroglyphics. The words being dictated by the Pharaoh were taken from an actual letter sent by a pharaoh to one of his agents.

The page of the Bible that Johann Gutenberg is examining is an exact replica of a page of the Gutenberg Bible on display in the Huntington Library in San Marino, CA.

Spaceship Earth debuted in 1982 as part of the opening of EPCOT.  The original narrator was Lawrence Dobkin, who was replaced in 1986 by Walter Cronkite.  The attraction underwent another rehab in 1994. At that time, Jeremy Irons replaced Walter Cronkite as the narrator. Also the ending was changed, more audio animatronics were added, and the song, Tomorrow’s Child, was replaced with an instrumental musical ending. In 2008, the fourth edition of the ride opened with the current narration by Dame Judi Dench.

If Spaceship Earth were a golf ball, the golfer would need to be one mile tall!

Spaceship Earth is made out of alucabond, a carbon – aluminum compound, which is easily cleaned and can withstand the Florida climate.

Spaceship Earth is actually two spheres, one inside the other. The outer shell houses the inner core and ride system.

Spaceship Earth has a unique gutter system so that guests passing by do not have rain dumped on them. The panels were developed to suck in the water as it hits them and in turn it replenishes the water around the World Showcase Lagoon.

For the Millennium Celebration, a special structure was attached to Spaceship Earth, Mickey’s Hand holding up the 2000. Subsequently, the word EPCOT replaced the 2000 on Spaceship Earth. At 257 feet tall, the Millennium 2000 Icon was the tallest point at Walt Disney World Resort, besting the 199 feet of The Twilight Zone Tower of Terror at Disney-MGM Studios.

Mickey’s gloved hand, the wand and the “2000” logo weighed nearly 50 tons. The steel frame that supported the icon weighed 250 tons. Each number in the “2000” logo was 36 feet tall. Those numbers are covered with more than 250,000 reflective eye-catchers.

In 1988, the Epcot Daredevil Circus Spectacular was performed 4 times a day in Future World. As part of the act, two Space Cyclists would race toward Spaceship Earth on a high wire! The Rodriguez Family performed trapeze acts around the sphere also!

The attraction was totally redone in 2007. The scenery was cleaned up, repainted and lots of new audio-anamatronics as well as scenes were added. The new audio-animatronics are amazing, very realistic and really brought each area to life. (Deb’s Review of the current Spaceship Earth.) Read the Complete Press Release Spaceship Earth reopened mid December 2007.