We’ve been reporting live from the parks, where one of the biggest questions about Disney’s reopening was about the beloved characters! With traditional meet and greets and parades canceled for the time being, what WOULD the character interactions be like?

In Magic Kingdom there are FIVE Character Cavalcades that happen several times throughout the day. You can spot the various cavalcades along the parade route from Frontierland to Main Street USA. These cavalcades occur several times throughout the day so keep your eyes peeled! With each of these cavalcades, guests are encouraged to snap pictures, take videos, and wave, but you have to maintain a safe distance, just like you would for any other parade float or vehicle in motion.

The Mickey & Friends Cavalcade features your classic faves such as Mickey, Minnie, and Pluto! Mickey and Minnie are dressed in their 90th Birthday outfits that first debuted in Disney World in January of 2019.

There are additional Cast Members on the float as well, waving to guests as they pass by. 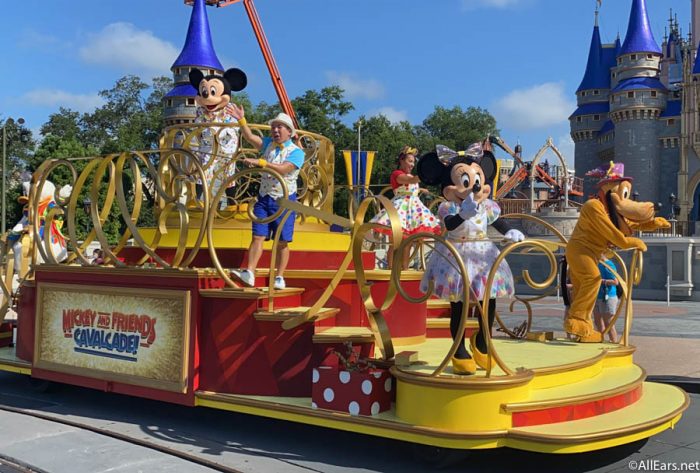 Folks can gather around like during the parades to snap pics, but you cannot approach the float.

“Get Your Ears On” is played as the float passes by.

Some stilt walkers waltzed by and gave us a wave too!

The Royal Princess Processional is a float with several royal favorites such as Ariel, Belle, and Cinderella aboard!

Parade super fans may recognize the float the princesses are standing on! It’s none other than the castle float that has appeared in several Magic Kingdom parades!

Also part of the Processional are Tiana and Rapunzel, in their own float!

Our favorite star of the Royal Princess Processional, however, has GOT to be Merida as she rides none other than her horse, ANGUS!

We spotted the Fantasyland Friends Cavalcade and got to wave at Winnie the Pooh, Peter Pan, and Alice on the main float!

Tigger was bouncing along the parade route, happy to see everyone!

Making sure EVERYONE saw him was Gaston, riding another super cute horsie.

Aladdin and Mary Poppins are also part of this cavalcade!

In addition to the cavalcades, we saw a few other famous friends throughout the parks. We couldn’t get as close as we used to be able to or give hugs, but we were able to take a quick pic and wave! Right as we entered Main Street U.S.A., we spotted the Main Street Trolley with Pooh’s friends on board!

Rabbit, Piglet, and Eeyore were all aboard, welcoming guests back to Magic Kingdom!

This wasn’t listed as one of the character cavalcades but we’ve spotted them at both the Cast Member Preview AND the Annual PAssholder Preview days!

While exploring Magic Kingdom, we also ran into a few familiar faces! We spotted Jack Sparrow near Pirates of the Caribbean…

…as well as Stitch and Buzz in Tomorrowland!

These characters are around to wave and to pose for physical distancing selfies throughout the day!

Heading to Frontierland we spotted Tinker Bell who must have been transported via pixie dust on top of her treasure chest! She made her way down Main Street, but on her way, she ran into some friends…

The Country Bears were so excited to see Tink! They waved and greeted guests from the roof of Country Bear Jamboree!

Anastasia and Drizella made a surprise appearance from Cinderella Castle! They were up to their usual hilarious banter.

We took a quick safari over to Animal Kingdom to witness the most creative character cavalcade we’ve seen all day! Chip, Dale, and Goofy cruised by us wearing their DinoLand USA gear.

The relaxation station near Upcountry Landing in Asia was a great place for character spotting! We saw two boats full of characters and entertainment coast on by while we rested.

Timon and Rafiki even made a grand appearance. Asante sana for stopping by you two!

We’ll continue to update this post as we see more characters throughout the park! Make sure you’re following along for more updates on the grand reopening of the Disney World theme parks!

Follow along with us on our first day back inside Disney’s Magic Kingdom here!

Want to learn more about the Reopened Disney World?

One Reply to “Here’s What the New Character Experiences Are Like at Walt Disney World!”

Eats at the EPCOT Experience Has Reopened in Disney World!