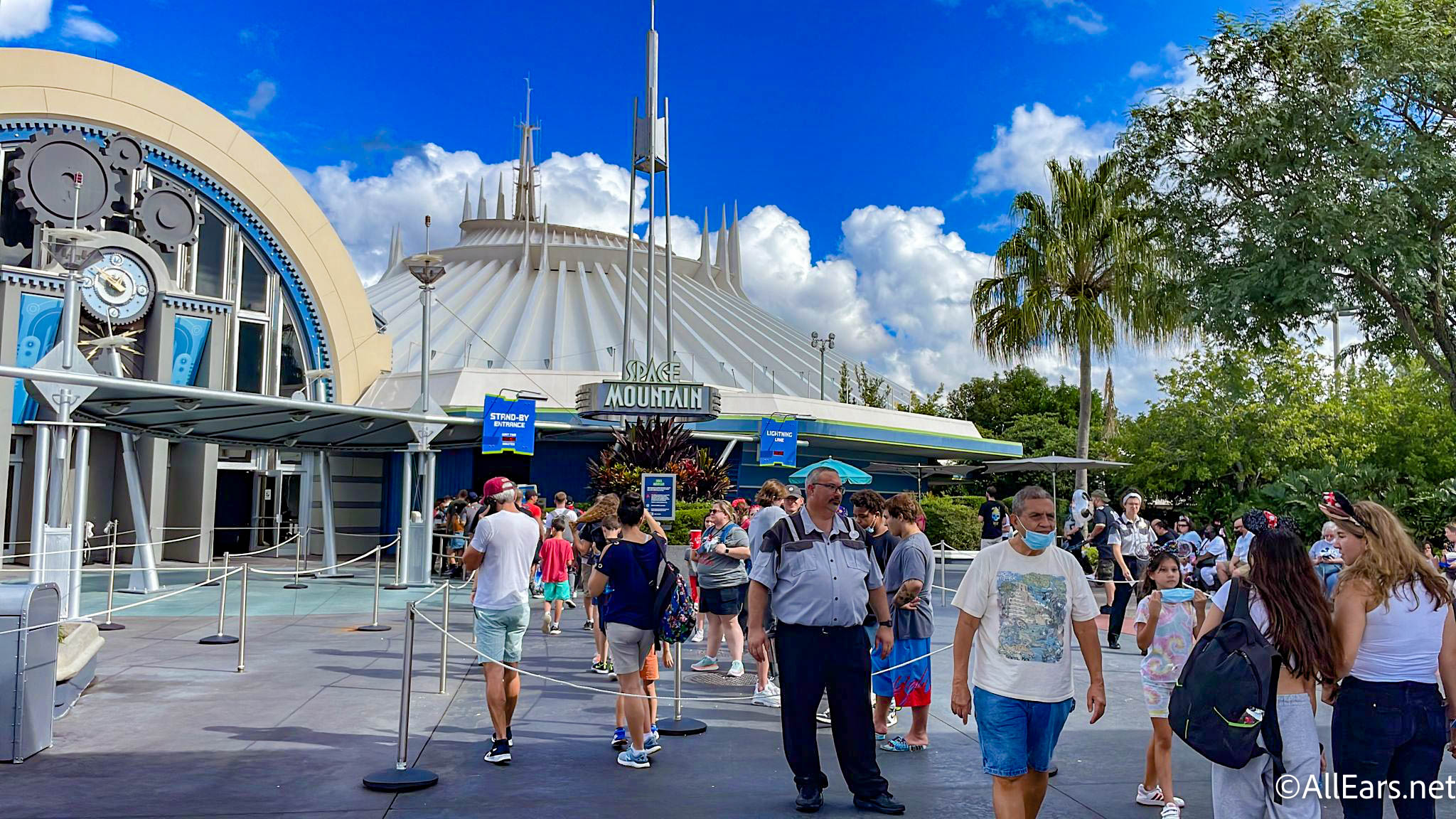 Space Mountain is a roller coaster in the dark and an absolute must-do classic ride. It opened in 1975, but actually originated in the early 1960s when Walt Disney came up with the idea of a high-speed attraction themed around the space age. Located at the far end of Tomorrowland, the attraction’s towering white structure is unmistakable. 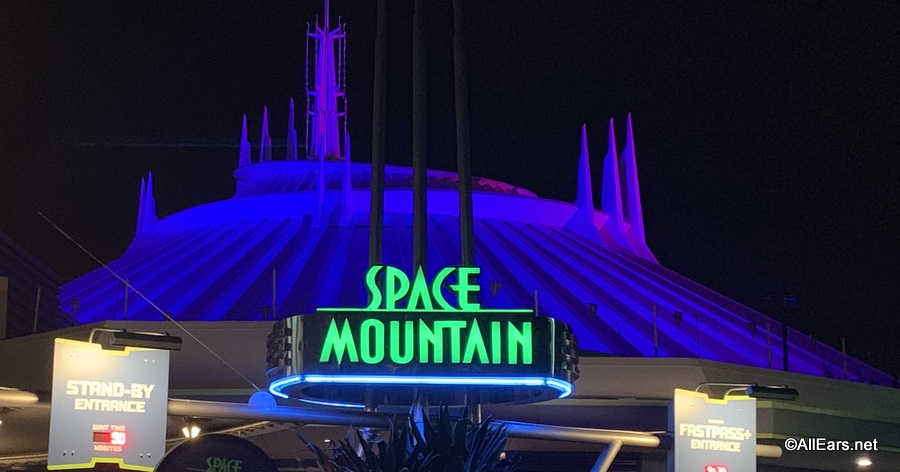 Entering Space Mountain, you find yourself in a dimly lit queue that seems to go on and on and on. As you near the Space Port (loading area), you hear shrieks from the space travelers who have gone before you. You will be sent left or right, as there are two mirrore tracks on this attraction called Alpha and Omega. Eventually, you’ll reach the loading platform, and will board six-passenger rockets, seated single-file, for your journey into space.

Slowly your vehicle makes its way into a tunnel of strobe lights and colors. You’re then thrust into the darkness of space via a roller coaster that dips and swerves through the galaxy, past shooting stars and glowing planets! The entire ride lasts two and a half minutes with peak speeds of 28 miles per hour.

Basically speaking, Space Mountain is a fast, bone-rattling roller coaster in the dark! 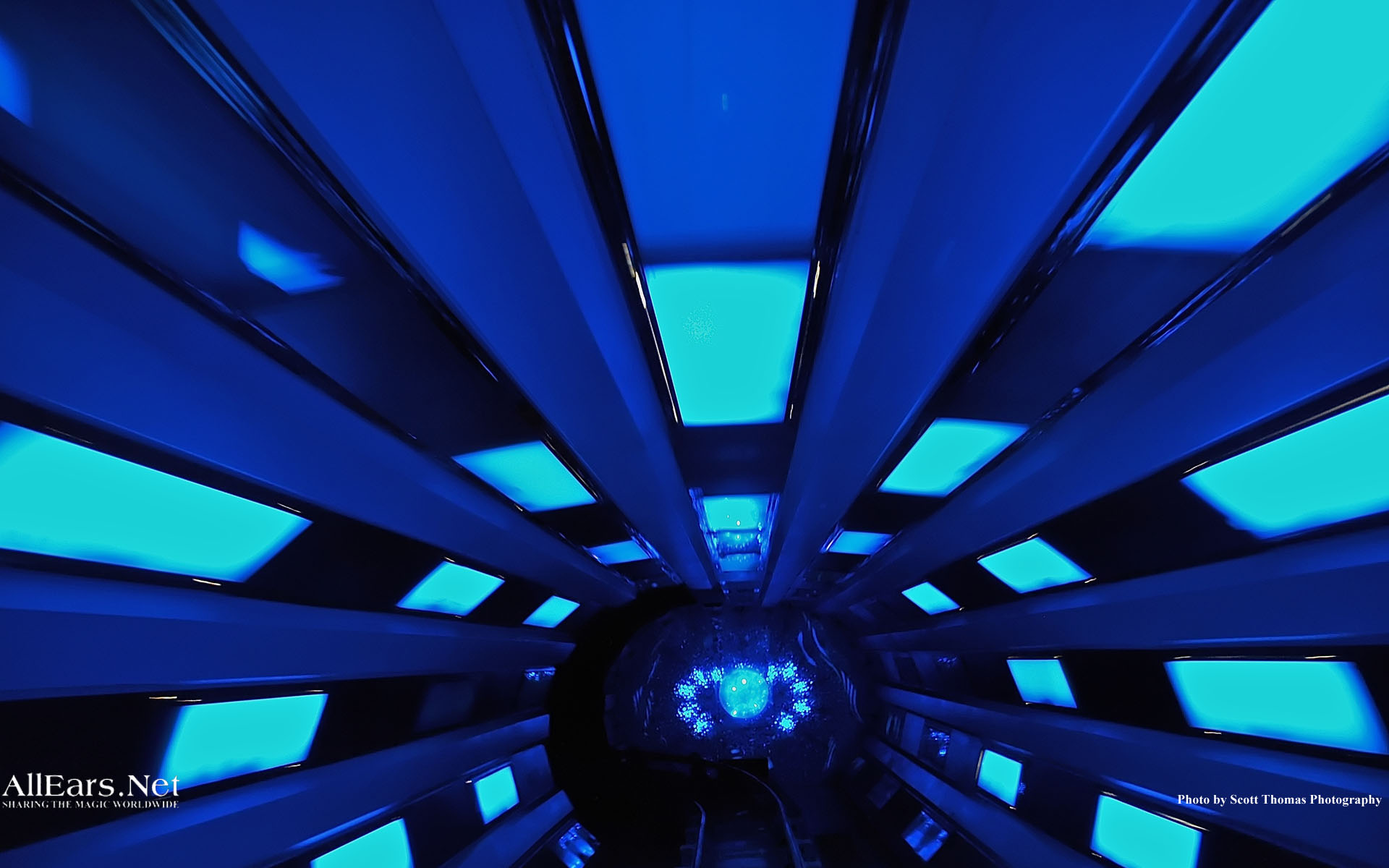 Lightning Lane access for Space Mountain is available for purchase as an Individual Attraction Selection. During the day, average standby wait times are between 50 – 100 minutes.

If you are not purchasing Lightning Lane access, try going first thing in the morning or in the evening.

Accessibility: Guests in ECVs must transfer to standard wheelchairs, then to the ride vehicles to experience Space Mountain. Guests must be able to step down into and up out of the ride vehicles.

Due to the nature of the experience, service animals are not permitted on this attraction.

Portions of the video preshow, which includes health warnings, are closed-captioned.

WARNING: For safety, you should be in good health and free from high blood pressure, heart, back, or neck problems, motion sickness, or other conditions that could be aggravated by this adventure. Expectant mothers should not ride.

Seat Restrictions:  Seats may be restrictive; guests may wish to ride alone due to limited leg space and/or small seat size. Guests must be able to step down into and up out of the ride vehicles. 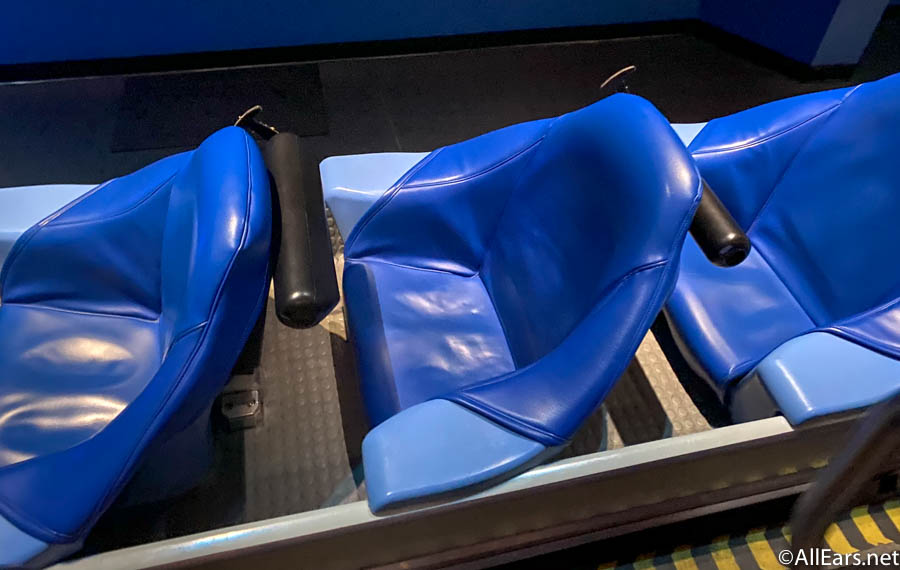 The queue area has interactive games to play along the way.

This is a PhotoPass attraction. After the initial take off, before the largest lift, a large flash snaps your photo. If you like, before you take off, ask a Cast Member if it’s on the left or right as it varies based on the track. At the unload, you can see the photos — tap your MagicBand on the touchpoint to have your photo added to your My Disney Experience account. 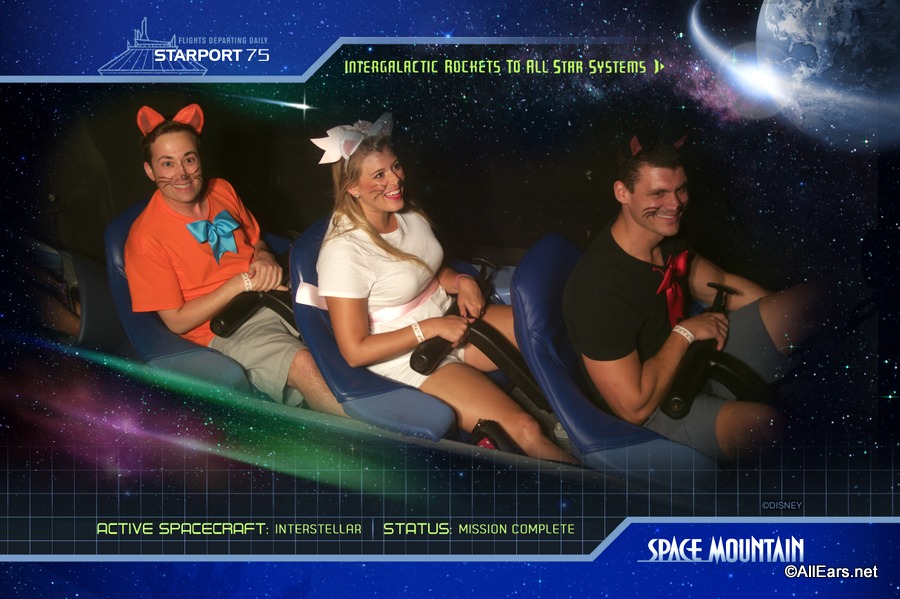 The attraction exits into the Tomorrowland Light and Power Company Merchandise shop. You can find Tomorrowland and Space Mountain specific merchadise, as well as D-tech customizable phone cases and MagicBands. 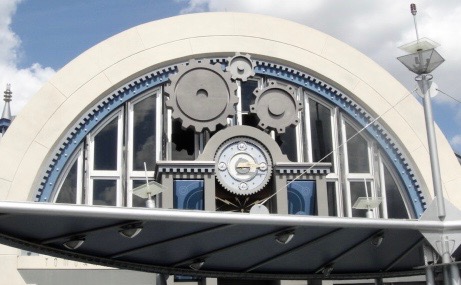 The cone shaped peak of Space Mountain is 183 feet above ground. Space Mountain measures 4,508,500 cubic feet — capable of holding a small skyscraper inside. The base’s diameter of 300 feet took two years to build. The basic structure of the mountain is composed of great ribbed slopes — 72 massive pre-stressed concrete beams forming a gigantic sealed cone. Each of the 74-ton concrete beams was cast near the Space Mountain site and then hoisted into place by mammoth cranes to complete the cone. Each beam is 117 feet long, 13 feet wide at the bottom and 4 feet wide at the top.

When Space Mountain officially opened, it joined the Country Bear Jamboree as the only two Disney theme park attractions to debut at the WALT DISNEY WORLD® Resort in Florida.

When fully operating, there are two sides of Space Mountain which have almost identical ride tracks. One side is 3,186 feet, the other 3,196 feet.

On August 30, 2010, Space Mountain at Walt Disney World unveiled an “enhanced audio experience” that features a new, exclusive composition. The music plays on all “flights” along with varying sound effects on 60 speakers. The so-called “Starry-O-Phonic Sound” compliments enhancements that debuted on Space Mountain previously, including new lighting, storyline elements and updated decor.

While the main structure is painted “icy white,” its base is a light blue color.

The stripe on the side of the Space Mountain ride vehicles is produced by a special clear paint with phosphorous added. The paint is illuminated by the black lights in the load/unload area and by the all-night maintenance lights throughout the ride. There are four incandescent-bound black lights.

Space Mountain can be found at the other four Magic Kingdom-style Disney parks. It is said that the Disneyland Paris Space Mountain, followed by Disneyland in California, are the best.

When the attraction was finally given the green light, Mercury 9 and Gemini 5 astronaut Gordon Cooper joined the Space Mountain creative team as a consultant. He wanted to make sure that the attraction incorporated information gleaned during NASA’s early space missions and that the experience felt like actual space flight. His valuable input has made Space Mountain a favorite for many years.

At special events, Space Mountain may have special experiences! For example, at Mickey’s Not So Scary Halloween Party and Villains After Hours, it may be a completley dark ride with spooky soundtrack. 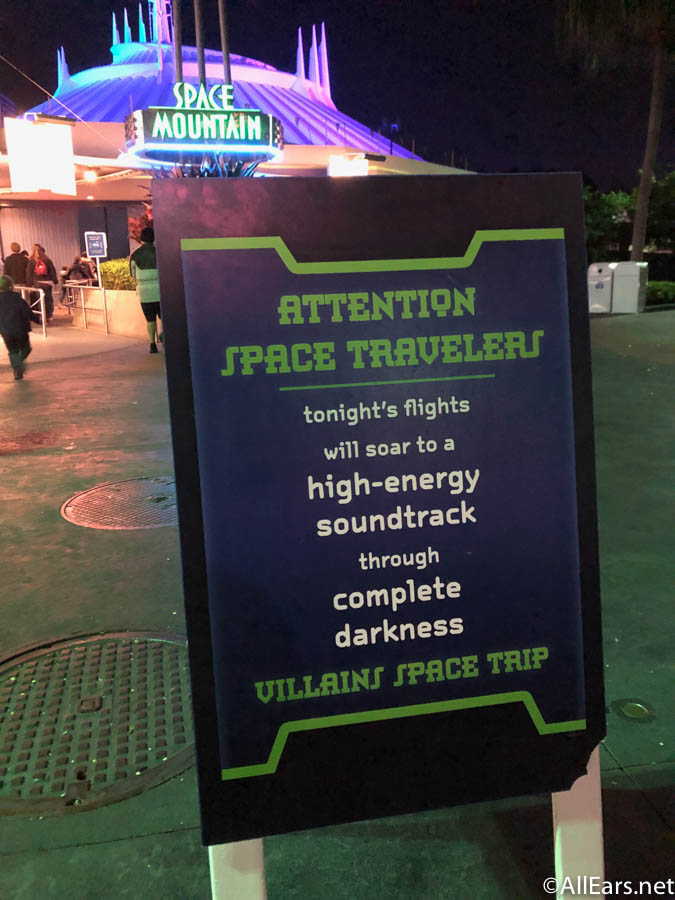 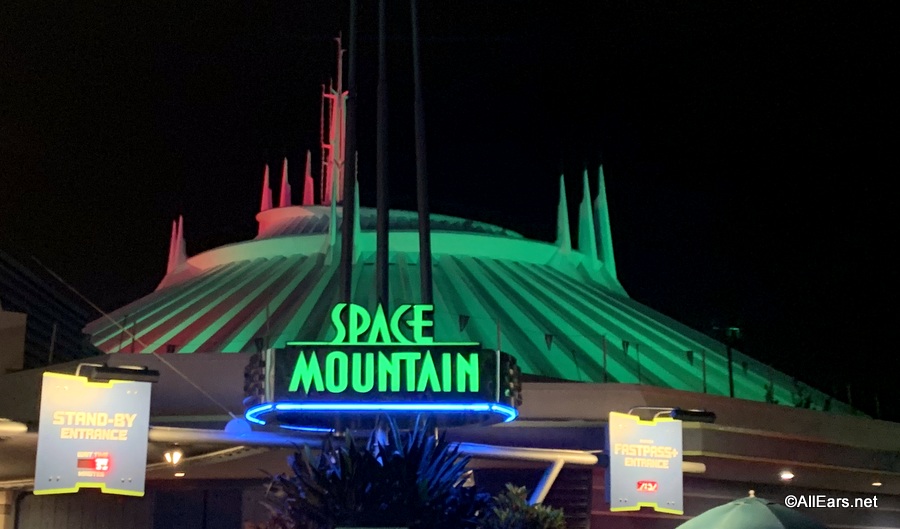