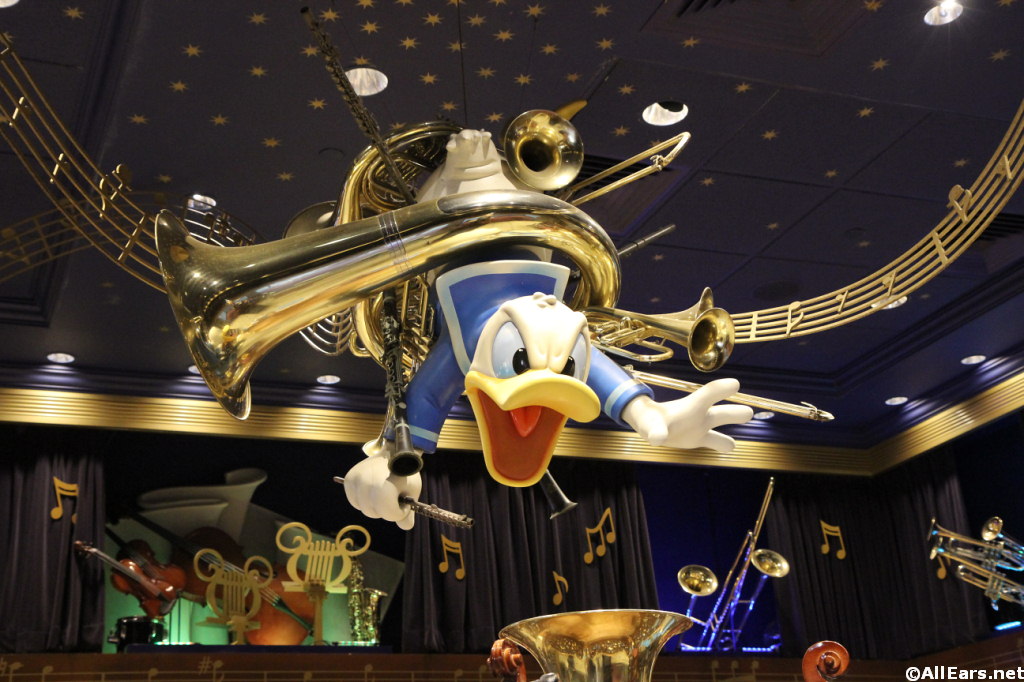 Mickey’s PhilharMagic is a 3D movie offering and it is truly a magical experience. Don your glasses and take a seat and be prepared to be immersed into classic Disney songs!

Mickey’s PhilharMagic is located across from the Prince Charming Regal Carousel. 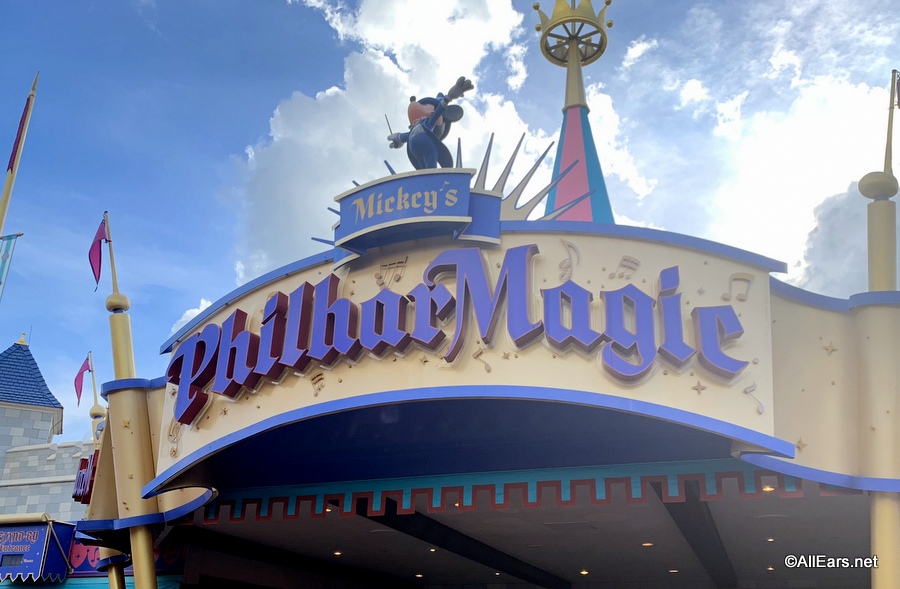 Mickey’s PhilharMagic is a feast for the eyes and ears. Everyone from the youngest to the oldest will enjoy it because it’s fun, charming, and happy! The whole experience takes about 12 minutes.

Enter through the Fantasyland Concert Lobby, past posters of performances by classic Disney characters.  Pick up your “opera glasses”  on the way to the theater. 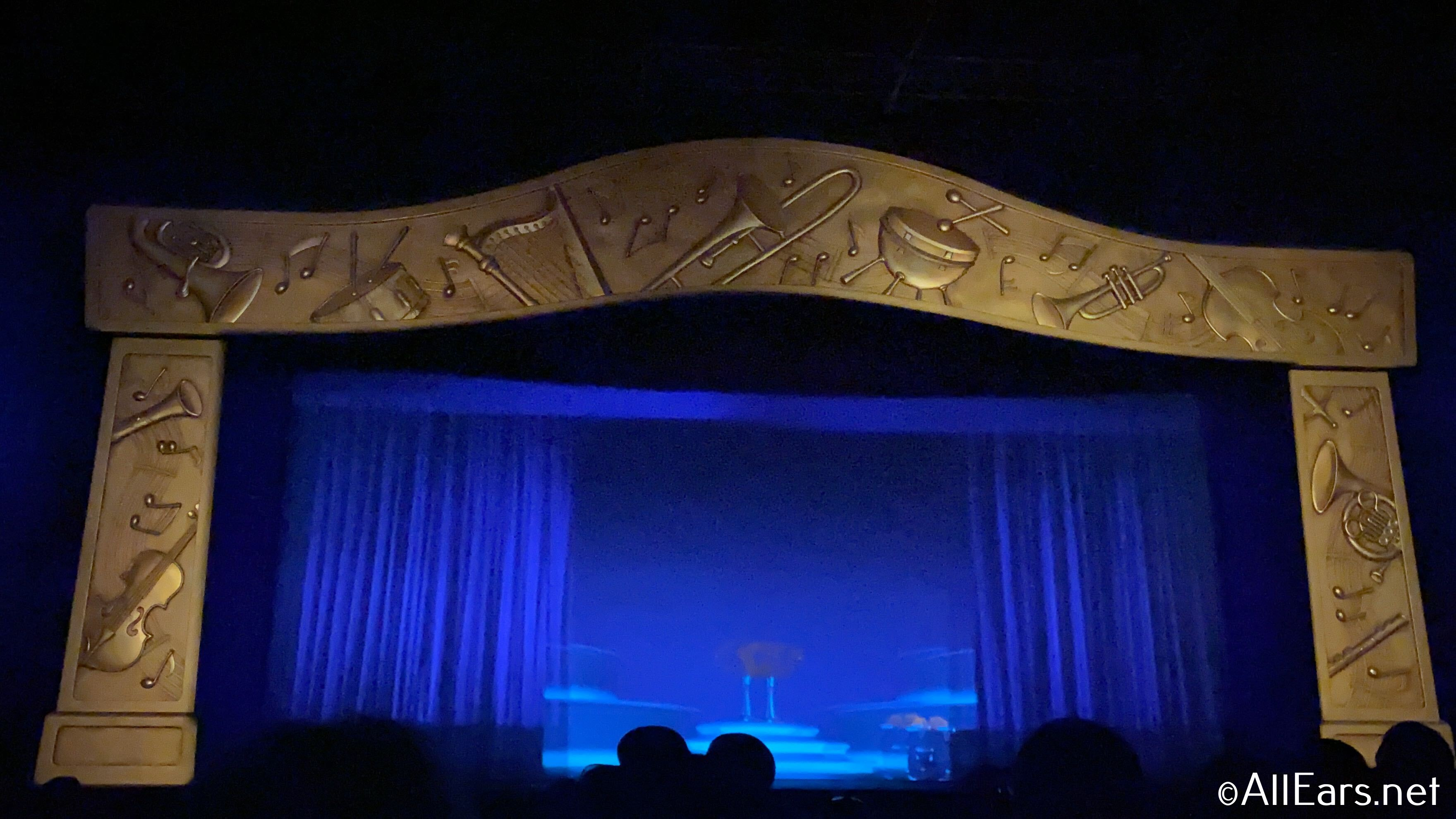 Once the doors open, proceed inside to the theater (which seats 486 guests and has space for 10 wheelchairs) for the show. Inside you’ll see a beautiful gold proscenium stage decorated with musical instruments in relief. Once everyone is seated, you hear Goofy running around backstage. You hear Goofy saying that it’s time for the show and… “Gawrsh, where is everyone?” The orchestra is missing and Donald is sleeping. The curtains go up anyway and the fun begins! 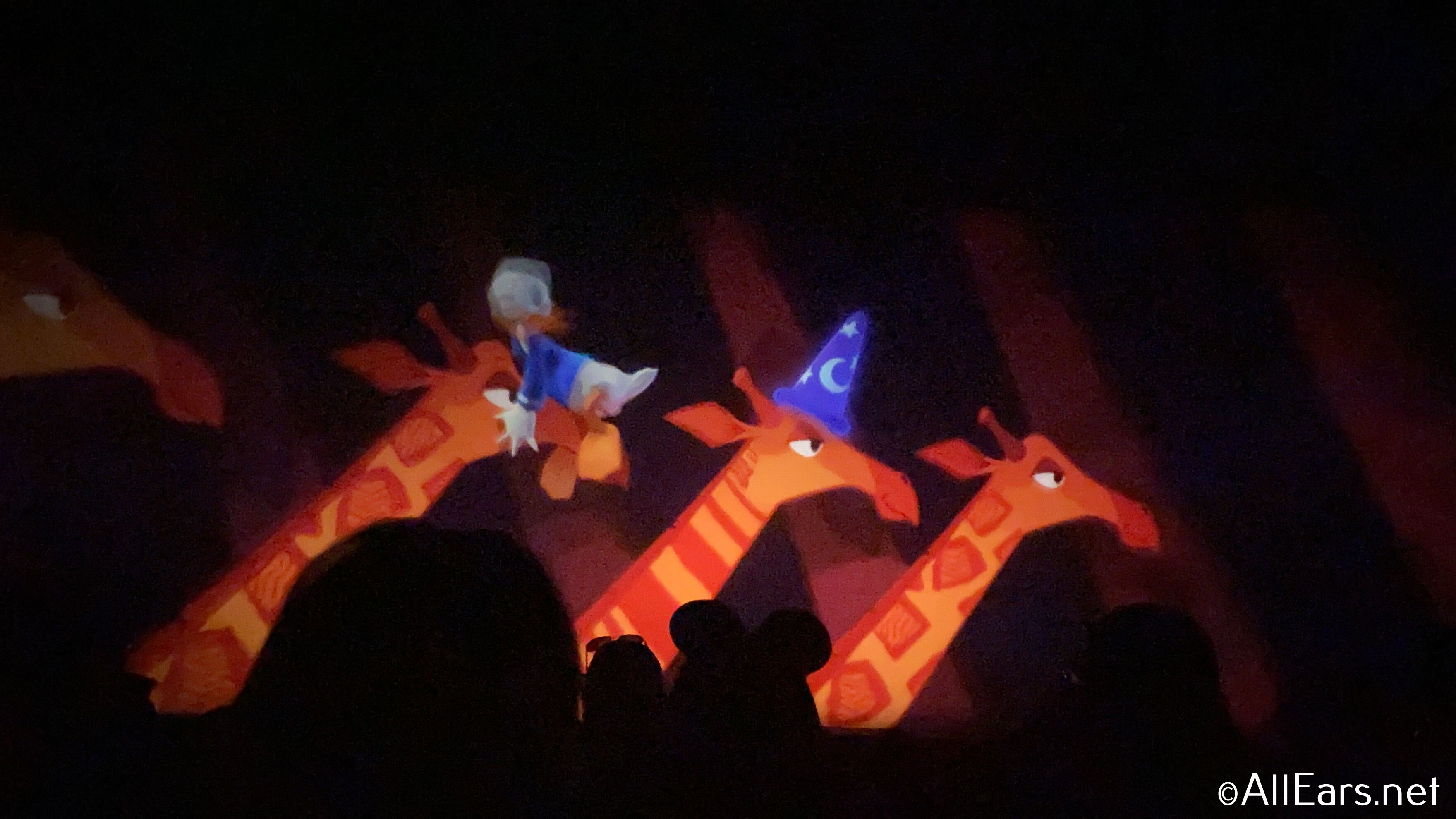 When the movie begins, you’ll meet some of Disney’s most loved characters (Flounder, Ariel, Simba, Peter Pan, Tinker Bell, Aladdin, Jasmine, Iago, Mickey, and, of course, Donald) and hear some of Disney’s most memorable songs. The 3D effects are brilliant, but it’s the pairing of the 3D with other effects (scents, vibrations, wind, etc.) that make the whole experience so fantastic. Somewhere in the middle of the movie you’ll suddenly realize that the proscenium is gone and the movie is being projected on an almost 180-degree screen, one of the widest in the world. 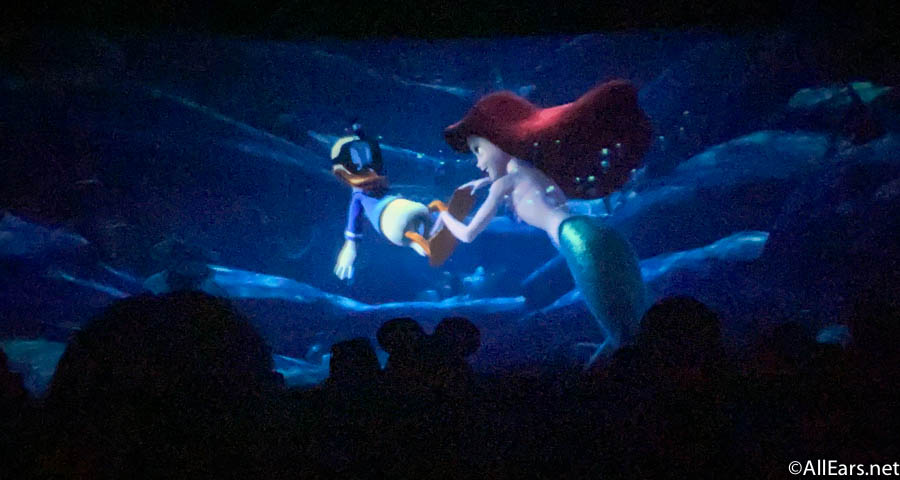 The film ends with a bang — literally! Donald Duck is shot from an on screen cannon. Make sure to turn around and you can see his cute little duck behind. 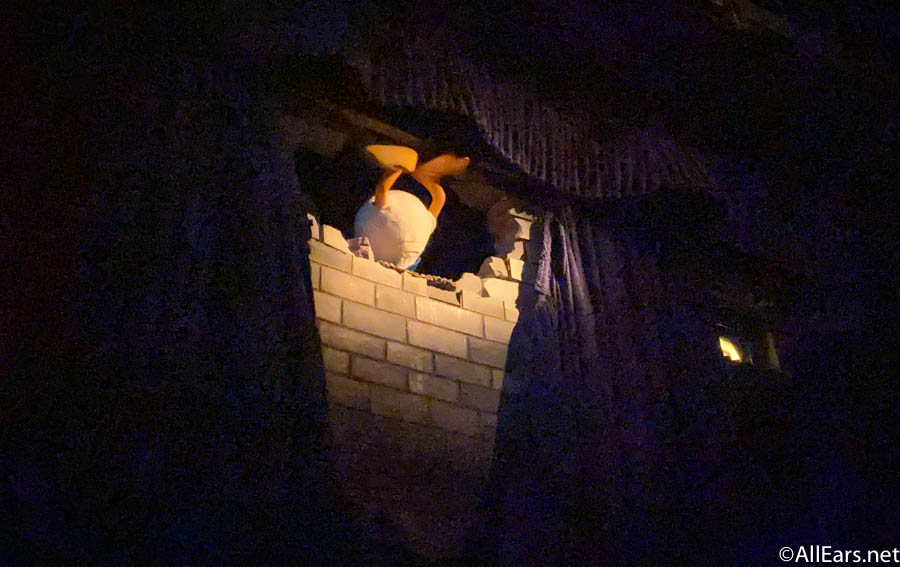 Lightning Lane access for Mickey’s PhilharMagic is available with the purchase of Genie+. However it’s very rare you’ll have to wait more than one show to get a seat.

Accessibility: Guests may remain in wheelchair/ECV. Audio description is available.

SEAT TIP: In the waiting area there are sets of doors opening into the main theater. The doors on the right lead to the back of the theater and the doors on the left lead to the front rows. Go for the left doors and try to get in one of the first five rows if you can. Make sure your view is as unobstructed as possible. Take note of the “architecture” of the theater seats; the posts on the seat backs are carved like fiddle heads. 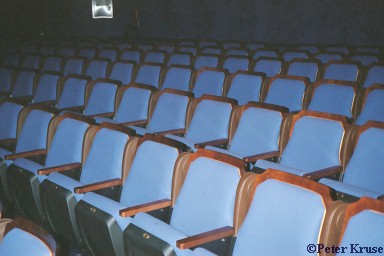 The seats are padded and very comfortable with lots of leg room. This is a great attraction to take in when you need a little break from being on your feet, or want to enjoy some air conditioning.

The theater exits into Fantasy Faire, which is a gift shop that features plenty of Donald Duck items! You’ll also find a large selections of Mickey ears! 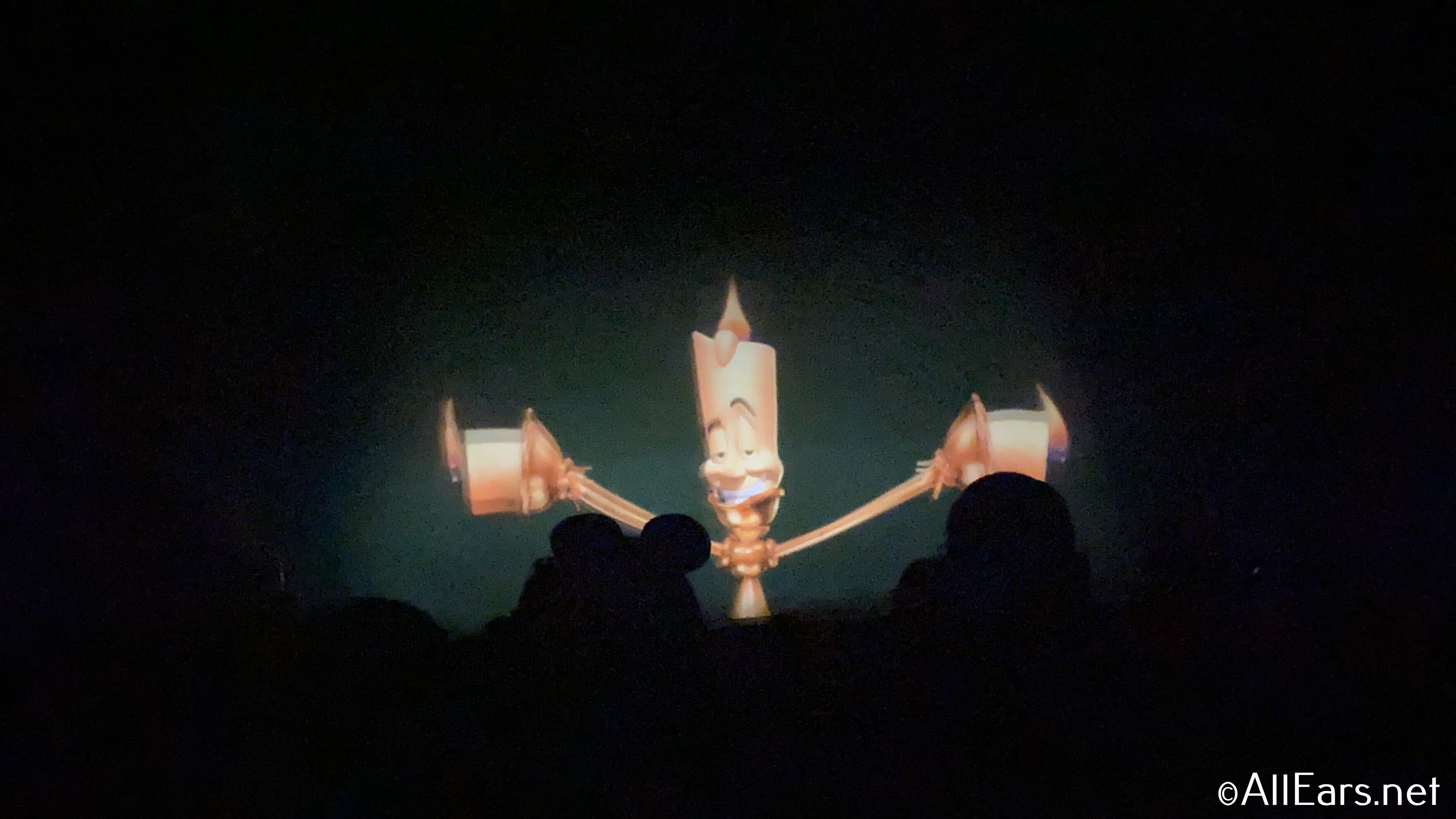 “Mickey’s PhilharMagic” features the largest seamless projection screen in the world, representing the most immersive wrap-around image Disney has ever created. The screen measures 150 feet long and 28 feet high.

Donald’s voice as heard in the show was created out of classic performance from the past by Clarence “Ducky” Nash, the original voice of Donald Duck. Tony Anselmo, the current voice of Donald, added a few lines that were not recorded by Ducky in the past, such as humming the melody to “Be Our Guest.”

The show features the largest cast of classic Disney animated stars who have ever performed together in a single 3-D show.

Animator Nik Ranieri, who brought Lumiére to life for Disney’s animated classic “Beauty and the Beast,” returned to render him in 3-D for “Mickey’s PhilharMagic.” Animator Glen Keane, creator of the magical Ariel in “The Little Mermaid,” also returned to develop her in 3-D.

The entire production of Mickey’s PhilharMagic was created totally on computer, representing the first time the featured classic Disney characters were completely modeled and animated by computer.

The long mural that spans the lobby is a composite of imagery from animated classic Disney movies with musical themes: “Toot, Whistle, Plunk & Boom,” “Melody Time” and “Fantasia.”

Some of the songs you’ll hear during the show include:

The interactive lighting system developed by Disney for the Tokyo DisneySea resort made its U.S. debut in Mickey’s PhilharMagic. The system runs on its own, with a series of cyber lights, while synchronized with the film through computerization. Smoke effects enable guests to see the lights, casting shadow elements that are integrated into the performance.

The show is in the same theater as the “Mickey Mouse Musical Revue” in which Mickey made his Magic Kingdom debut as an orchestra conductor in 1971. In 1980, the show moved to Tokyo Disneyland where it became an opening day attraction in 1983. It continued to play at Tokyo Disneyland until 2009 (it was replaced by Mickey’s PhilharMagic there too). The 3D film “Magic Journeys” and the live puppet show “Legend of The Lion King” occupied the theater until the installation of Mickey’s PhilharMagic in October 2003.