There have been a lot of changes at Disney World over the past few years, and some people are not happy about them.

We’ve seen a new paid system replace free FastPass, how you visit the parks has changed, there is currently no Disney Dining Plan, and some perks for hotel guests have been altered. So, what’s the worst part about going to Disney World right now? Well, we asked Disney fans, and here’s what they had to say!

Many, many people wrote about how the worst part of Disney World right now is Genie+. If you don’t know, Genie+ is the paid system that replaced FastPass in Disney World last year. It’s $15 per day, per person and allows you to make reservations for Lightning Lanes (old FastPass lanes) at various rides around the parks. There are also select rides not included in Genie+ that you can pay for separately to use their Lightning Lanes.

Disney guests said they miss the old FastPass system, as it allowed them to plan out their FastPasses in advance. With Genie+, you can’t book any Lightning Lanes until the day of your trip. So, many people said that it’s causing  them to be on their phones too much in the parks. One person said the worst thing is “the constant need to be tied to your phone instead of enjoying the park.”

Another said “I can schedule with the best of them but scheduling things on the day literally gives me anxiety. I hated doing it,” in regards to only being able to make Genie+ reservations the day of.

A reader said that Genie+ “completely ruined our last trip. Couldn’t plan anything ahead of time, because you didn’t know whether you’d get on your ride you want. We’ve been going to Walt Disney World for 30+ years with our family…We won’t be going back.” Oof! 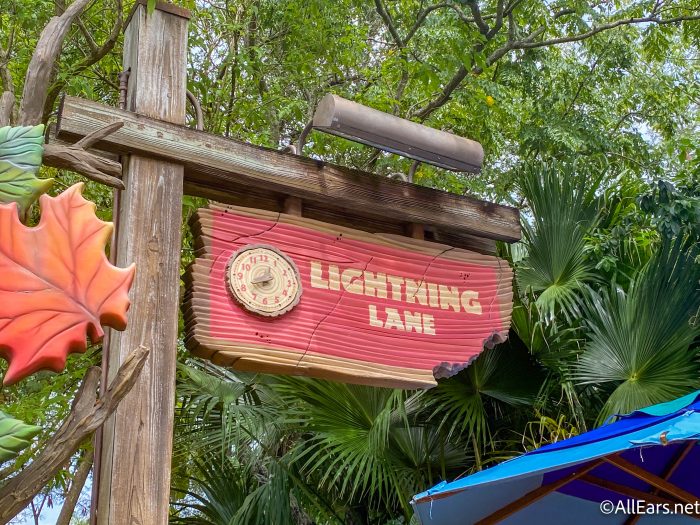 The other thing about Genie+ is that you can start making Lightning Lane reservations at 7AM the day that you’re going to the parks. A lot of people said they don’t like having to wake up before 7AM on their vacations, calling it stressful. One person said “when not able to at least plan 3 months out, everything is more stressful doing it by the minute of each day.”

Click here to see our Genie+ tips for busy days in Disney World!

Another thing people said is the worst part of Disney World right now is the crowd. One Disney fan said “Too many people! It’s hard to really take in the scenery and details when it’s wall to wall people. We were so spoiled when capacity was limited.” Ah, yes, we remember the days of very limited capacity — those wait times were a dream!

Besides the crowds as a whole, some Disney fans said their issue was with how individual people have been acting, saying they’re on their phones and not paying attention to their surroundings, or are completely oblivious to those around them.

One fan said “I’ve never seen the guests have such a lack of self awareness of where they are,” going on to say they’ve heard guests cursing, getting into loud fights, and more.

To go along with that sentiment, another Disney fan said their issue is with “So many guests who forget that it’s supposed to be a happy place and can’t figure out how to be kind to their fellow guests and Cast Members.”

Finally, one person said “Disney world is the greatest place on earth. The thing that makes it hard to deal with is the other guests. You should not be there if it makes you unhappy. This is a place for those of us who enjoy the magic. Anyone that isn’t interested in making the best time of their life shouldn’t go just to ruin the magic for the rest of us. Leave your negativity at home.”

Click here to see our tips for avoiding crowds at Disney World!

Another very popular complaint was about planning. Many people said the worst thing is not being able to be spontaneous anymore or just wing it due to how much you have to plan and understand now in order to do things in Disney World.

One person said “Having to reserve every little thing you want to do. We are going for the first time this year and it’s so overwhelming.” It definitely can be overwhelming! Luckily, we are here to help you plan.

Another thing about planning people said they don’t like is the Park Pass Reservation system. One person said “For me it’s the inconvenience of picking park reservations. It was always nice to just wake up and pick that park for the day and then hop around when we wanted.”

People said that planning so much takes away from their vacation. Another Disney fan said “Way too much planning ahead. They took the fun out of just going when you want and just walking around the park not on a time schedule.”

Finally, one person spoke about how all of this planning and the changes at Disney World have given them uncertainty. They said “We’re an old Disney visit family (every year since ’83) and this trip is feeling like the first time because none of our knowledge about how to deal with the parks applies any more.” We totally get that, with so many changes happening in the past few years, it can be very confusing.

Of course, when asking about the worst thing about Disney World, the price is going to come up. Disney World is expensive, there’s no doubt about that. But, one of the main issues people had was not necessarily the prices, but that you now have to pay for things you didn’t previously.

You now have to pay for things like parking at your Disney hotel, transportation to your Disney hotel from the airport (because Magical Express is gone!), and technically Extended Evening Hours in the parks, since only Deluxe and Deluxe Villa resorts (which are typically the most expensive) have access to the perk. Another added cost that we already mentioned is Disney Genie+ rather than the free FastPasses everyone used to get.

One reader said that they were questioning if Disney is worth the money right now. They wrote “The crowds coupled with the numerous ride disruptions and closures and signs that the ‘magic’ is fading really made us question whether we felt like we got the same cost benefit as we used to.”

And, some people just flat out said it’s overpriced, with one person saying
“We can travel to other countries for less than the price of Disney 5 star resorts.”

As there have been many changes in Disney World over the past few years, there are a bunch that people say are the worst right now. First up is the lack of the Disney Dining Plan, which has been unavailable since the 2020 closures. One person said “Not having to look at dining prices was a part of my vacation” since with the Dining Plan, you prepay for almost all of your food.

Other things people mentioned included the window for being able to book dining reservations being changed from 180 days out to 60 days out, as well as services like package pickup and resort pool hopping still being unavailable. There were also a lot of mentions about how people are not fans of not being able to park hop until after 2PM right now.

The loss of Extra Magic Hours was also brought up, with one person saying “not having extra magic hours for evening for everyone else not staying in a Deluxe resort. Not everyone is a morning person every single day of their vacation.” They’re referring to how only guests staying at Deluxe and Deluxe Villa Resorts have access to Extended Evening Hours, when before, all Disney hotel guests had access to Extra Magic Hours.

A lot of people actually had responses stating that there is not a “worst” part of Disney World! One person said “Not a thing. I’d rather be there than at work!” and another said that “nothing is the “worst part” other than not being there!”

One sarcastic reply we loved was one saying the worst part was “being forced to smile and *gasp* have fun. Making those gosh awful memories with my family. Not getting to be at work. I could go on and on with the drudgery! Sigh, life is just not fair.” 😂

Another Disney fan said “There is good and bad in everything. We understand things have changed and not everyone likes it, us as well. But I look for the positive and the smiles and memories our family makes. It is expensive, yes. Is it different, yes it is. Is it still our happy place! Absolutely!” That’s the spirit!

Along the same lines, another person wrote “We just got home and we had a great time…yes it was hot, it was crowded, lines were long, but we all know this going in, Disney is what we make it…the worst thing for me is entitled people… please realize there are others there besides you, be considerate and be kind to one another, that way everyone has a good time!!!” We agree!

Finally, one person said the worst part was “Not a single thing! I put on my patient pants and a smile and face each day as they come. A bad day at Disney World is still better than a good day anywhere else. What am I saying!!?? There is no such thing as a bad day at Disney World!” This positivity is what we need in our lives.

To wrap things up, we just wanted to point out that a lot of people responded saying the worst thing about Disney World is that “it’s in FLORIDA!” Yep, we know, people make fun of Florida all the time, we get it. It can be super hot here. And humid. And it rains randomly and often. But hey, if there’s one thing we love about Florida — it’s Disney World!

So, those were the most popular responses to the worst things about Disney World right now. Do you agree with any or all of these? Or do you have more to add to the list? Tell us in the comments! And stay tuned to All Ears for more Disney World news and updates.

Click here to see the 5 worst rides in Disney World, according to guests

What do you think is the worst part about Disney World right now? Tell us in the comments!

6 Replies to “The WORST Things About Disney World Right Now, According to Guests”