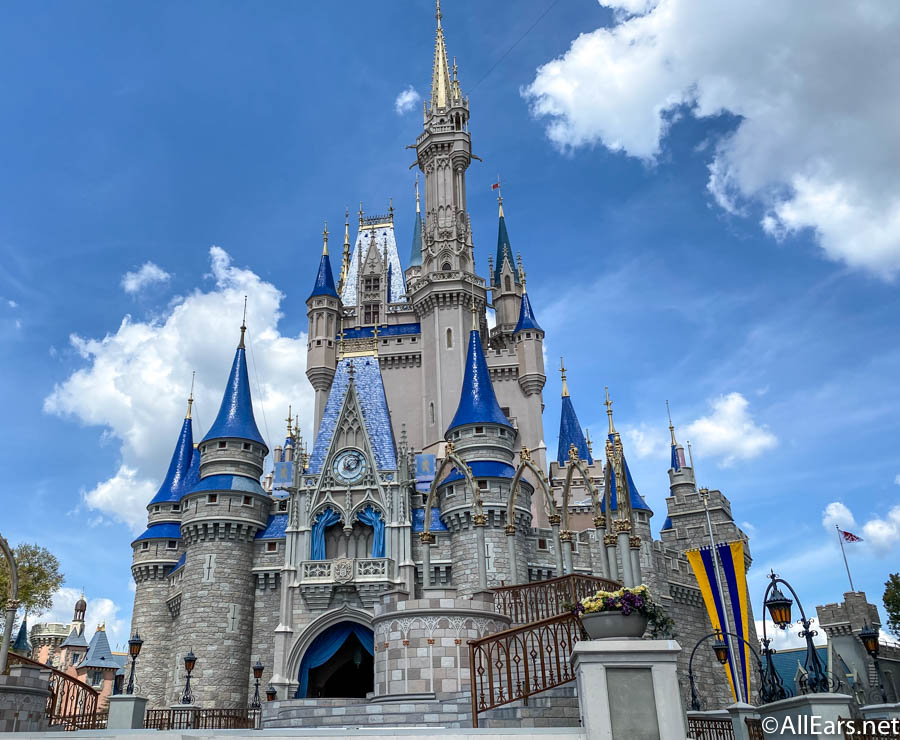 Cinderella Castle opened when the Magic Kingdom debuted on October 1, 1971. Painted in grey, blue, and gold, the Castle represents the Walt Disney Imagineers’ concept of a French palace-fortress. The base of the Castle is medieval in nature, while the turrets and graceful spires on the the upper level represent the architecture of a more Gothic era.

Measuring 189 feet high, the castle is the tallest structure in the Magic Kingdom.

Inside the Castle, you’ll find Bibbidi Bobbidi Boutique, a makeover salon for kids and Cinderella’s Royal Table, a character meal with the Disney princesses. Both require advanved reservations.

Additionally, there is the Cinderella Castle Suite inside the Castle. This is not accessible by most guests, and is mostly used for sweepstakes winners and marketing.

Don’t just walk through the Castle archway — take the time to look around you! Inside the main hall, the tale of “Cinderella” is told on five mosaic murals, each a Gothic arch 15 feet high and 10 feet wide.

Note that at certain times, the Castle Breezeway may be partially or fully blocked off due to the Stage Show performed several times a day in front of the Castle.

The Castle is wheelchair/ECV accessible.

Don’t miss Tinker Bell’s nightly “flight” from the Castle down toward Tomorrowland during the evening’s fireworks display. Tinker Bell flies 750 feet, averaging 15 miles per hour. It takes approximately 34 seconds for the trip. 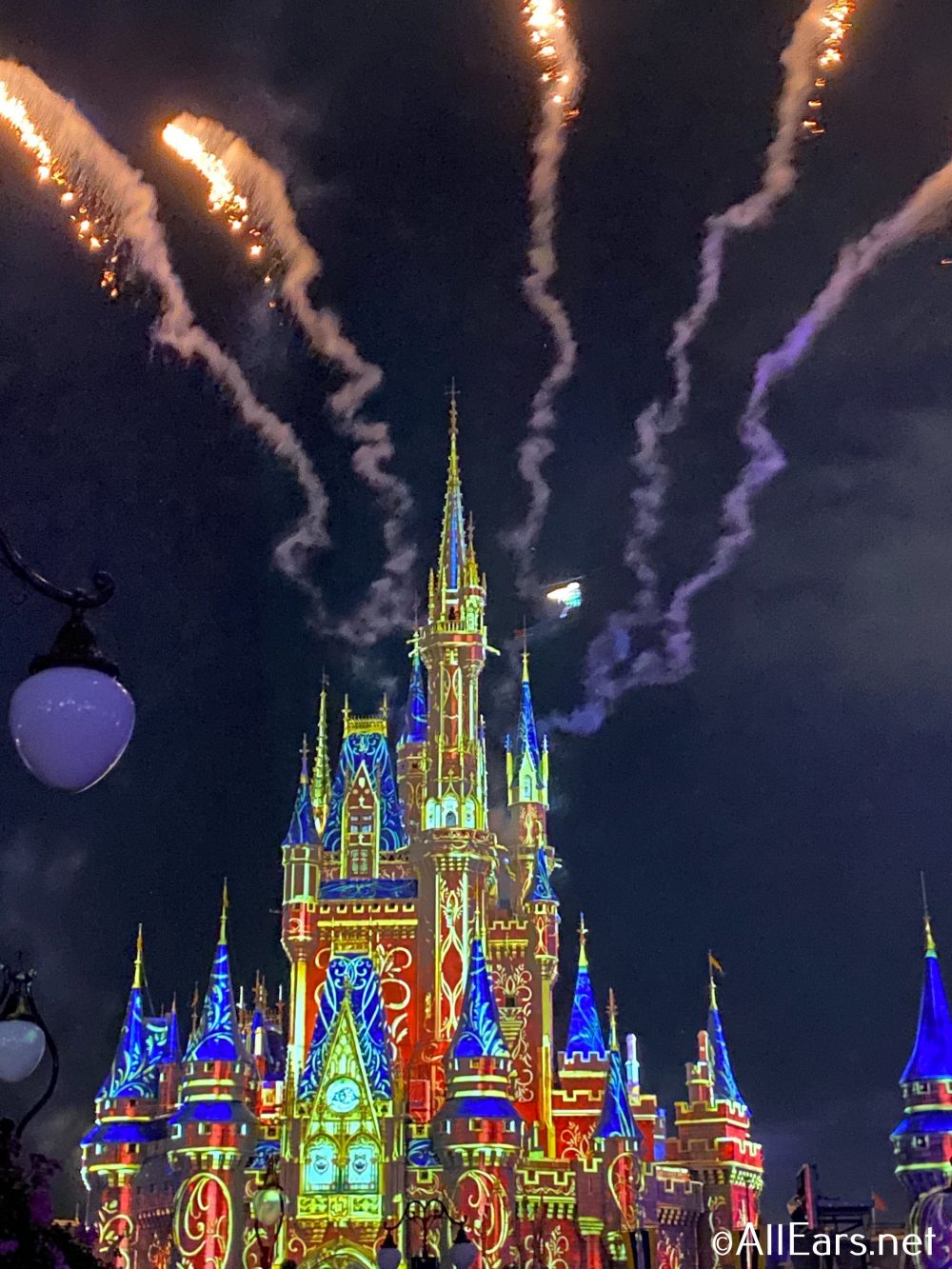 Along with Cinderella, other Disney royals such as Ariel, Snow White, Aurora, and Jasmine will join you at your meal. (Characters subject to change.)

A circular stairwell or a themed elevator takes you to the second floor of the Castle so you can dine at Cinderella’s Royal Table for breakfast, lunch or dinner. Younger guests are treated like royalty, called “princes” or “princesses,” while adult guests are addressed as “lords” or “ladies.” 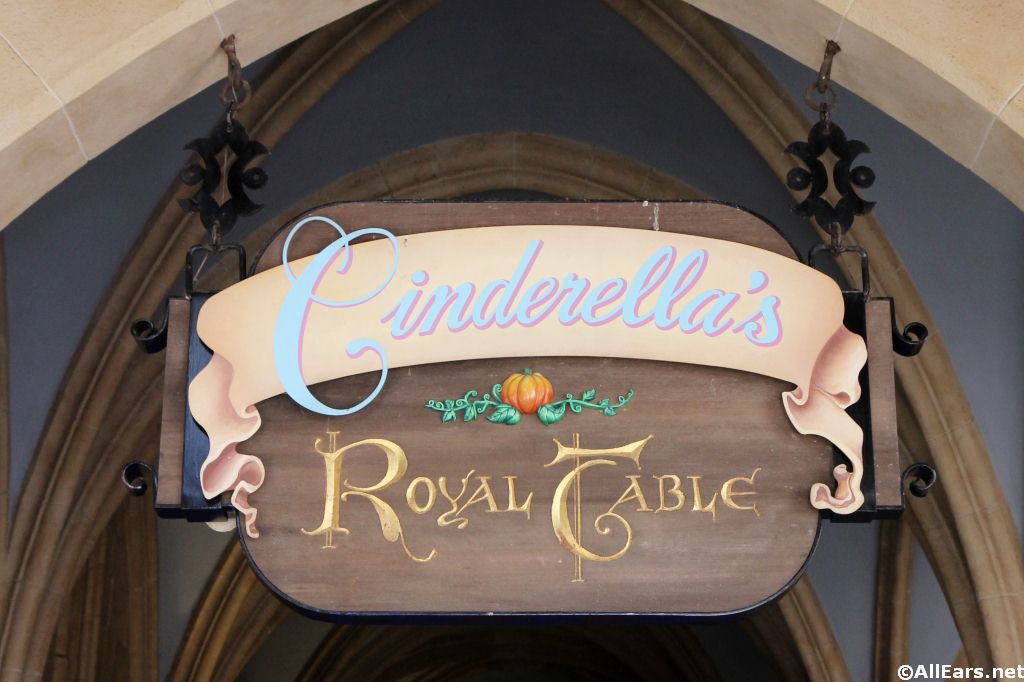 The Bibbidi Bobbidi Boutique — A boutique salon that transforms little girls into Disney princesses with hairstyling, make-up, and manicures.

Just beyond the Castle in Fantasyland you’ll find Castle Couture, which is a exension of the Boutique, where guests can find dresses and accessories for their makeovers.

Sir Mickey’s, themed to the cartoon “Brave Little Tailor.” is another merchandise shop near the Castle, located across from Castle Couture

There are 18 towers with their corresponding spires on Cinderella Castle. They were pre-fabricated near the site, then slated, gilded, and hoisted into place.

There are 13 gargoyles on the outside of the castle.

A decorative portcullis (iron grating suspended by chains hung over a gateway of a fortified place, normally used to prevent passage) that is permanently raised is located above the gateway to the main hall.

The mosaic in the Castle archway was designed by Disney artist Dorothea Redmond and created and crafted by a team led by the world-famed mosaicist Hanns-Joachim Scharff.

The five murals contain about 500 colors and a million pieces of glass, many of them fused with real silver and 14-karat gold. Smooth-faced Venetian glass and rough-surfaced smalti (enameled or glazed glass) traditionally used by Italian craftsman were incorporated into the design. It took a team of six people more than two years to complete the murals. Note that each of Cinderella’s wicked stepsisters has her own special facial tint. One sister is red in tone, to show that she is “red with rage,” while another is greenish (“green with envy”), as they both look on as Cinderella tries on the glass slipper — a perfect fit.

Tinker Bell embarked upon her first flight from Cinderella Castle on July 4, 1985.

In honor of Walt Disney World’s 25th Anniversary, Cinderella Castle was transformed into a giant pink castle cake (known by some as the “cakestle”), decorated with gum drops, Life Savers, lollipops and red candy hearts. The castle cake reigned for 15 months, from October1, 1996, through January 31, 1998. At the conclusion of the 25th Anniversary Celebration, Cinderella Castle was transformed back to its original traditional blue-and-gold-spired, storybook splendor. 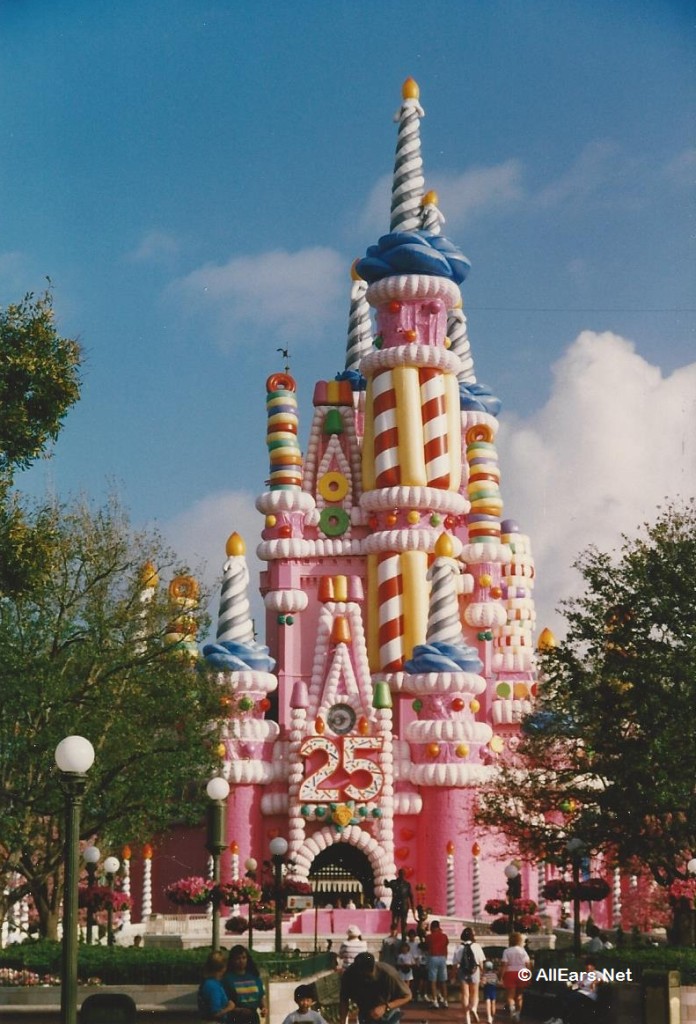 Prior to April 28, 1997, Cinderella’s Royal Table was called King Stefan’s Banquet Hall, which opened with Cinderella Castle on October 1, 1971. Walt Disney Imagineers had wanted to give the restaurant a regal name, and since there were no well-known characters from “Cinderella” that met their criteria, they instead took a little dramatic license and chose the name of Sleeping Beauty’s father King Stefan.

On November 16, 2004, guests heading down Main Street were met with a little mischief. Experiment 626 decided to celebrate the opening day of his attraction, Stitch’s Great Escape, by covering the Castle with toilet paper and graffiti! 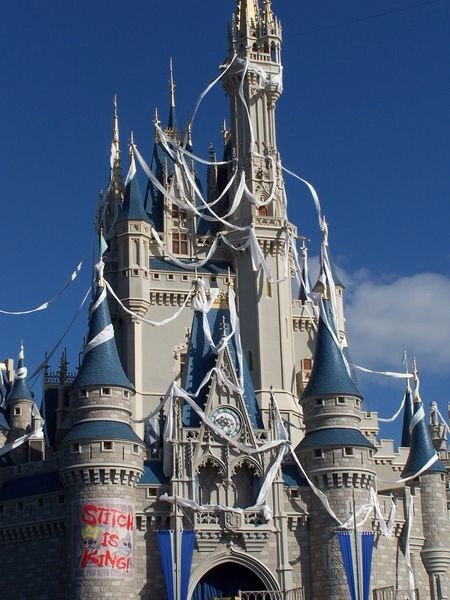 The columns situated in the walkways that curve around either side of the forecourt to Cinderella Castle are decorated with mice and birds from the Disney animated feature film “Cinderella.” The characters were sculpted by Blaine Gibson, who also sculpted the “Partners” statue on Main Street, U.S.A. and the Cinderella Wishing Well statue located on the walkway between Fantasyland and Tomorrowland.

There are more than 40 coats of arms on display inside Cinderella’s Royal Table restaurant. Each coat of arms refers to someone who has played a significant role in the heritage and history of the Walt Disney Company. These are just some of the noteworthy Disney people whose family names are represented: Roger Broggie, Sr.; Marc Davis; Roy Disney, Sr.; John Hench; Diane D. Miller; Dick Nunis; Marty Sklar; Card Walker. 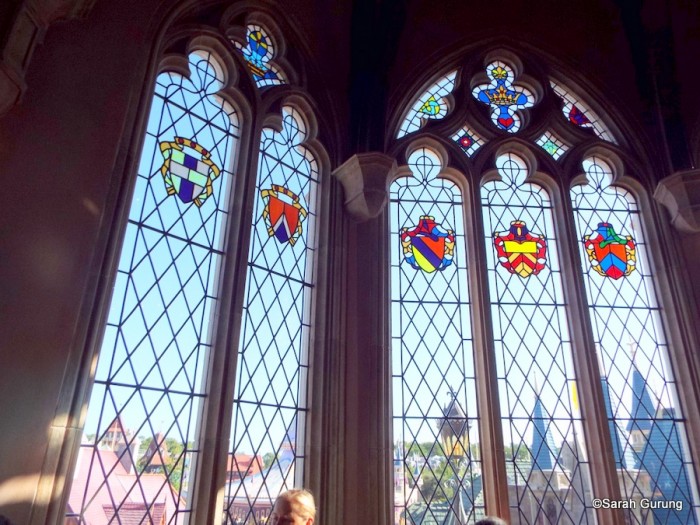 There is a penthouse inside Cinderella Castle that was intended to be an apartment for Walt Disney and his family when they were in Florida. After Walt Disney died in 1966, the apartment was never finished. Instead, the penthouse served as the operations area for Vista United Telecommunications (switchboard operators). It now serves as dressing rooms for the entertainers performing in the shows at the Castle Forecourt Stage.

The Castle was completed in July 1971, after about 18 months of construction. No bricks were used, and, contrary to a popular legend, the Castle can NOT be taken apart in the event of a hurricane. It was, however, built to withstand hurricane winds of at least 90 miles per hour. The inner structure is steel covered with fiberglass, secured to a concrete foundation. The turrets and towers also have internal steel framing and were lifted by crane, then bolted permanently to the main structure.