We’re back with another Marvel Movie! (I’ve been watching them all for the FIRST time!)

I have pretty high hopes for this one because 1. Captain America: The First Avenger was my favorite movie so far and 2. I deserve a really good one after Thor 2 and Iron Man 3.

As always, I have no idea what to expect plot wise — but I do expect Cap to dole out some righteous justice. 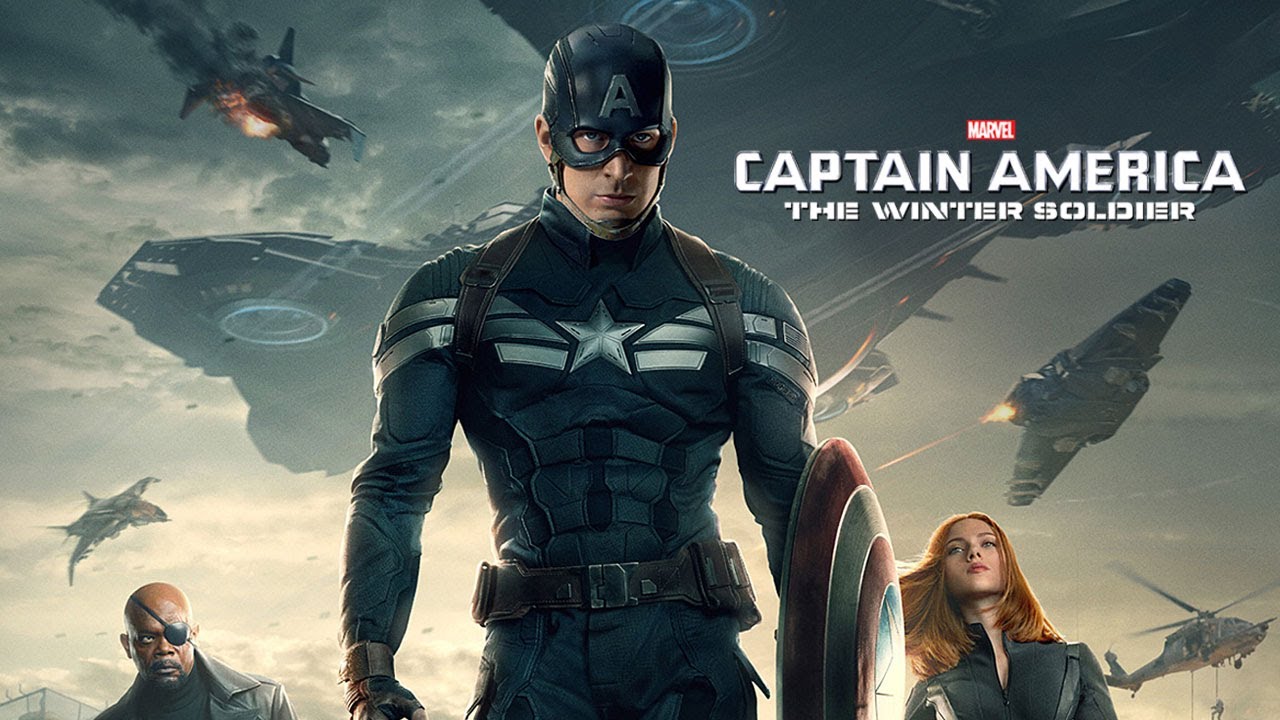 1. LOL Cap jogging is already making me laugh. Off to a great start.

2. I enjoy this zippy Sam fella and hope he sticks around. They have pretty good back and forth so I assume he will.

3. OMG Cap’s cute list of stuff to learn about. I paused it and noticed he has crossed out Star Wars, but not Rocky (Rocky II?), Berlin Wall (up + down), or Thai Food yet.

4. Those were some EYES Natasha just gave Sam.

5. “All the guys from my barbershop quartet are dead.” WOW THIS ONE IS GOOD. It’s already better than either of the last two Marvels I’ve watched.

6. Natasha (who I have since realized is Black Widow) is really very kick butt. Maybe I’ll be done with all of these by the time her movies comes out in theaters.

7. YASS TAKE THAT HELMET OFF.

10. Cap and his values. Sometimes he’s like a naive baby, others he’s right.

11. Ok that was presh with that little kid. Why does Cap always have cute moments with little kids?

17. “But you gotta get Iron Man to stop by my niece’s birthday party.” LOL

21. I kinda love when the robots sass the heroes. This is very Jarvis.

22. WHO IS THIS WITH THE LUXURIOUS LOCKS!! They better not hurt Sammy L!

23. Cap doesn’t seem like he would leave his stereo on…

24. They play this song at Hollywood Studios.

26. In addition to nice hair, this assassin also loves a smokey eye.

27. Wait…Sammy L can’t die. WHO WILL RUN EVERYTHING AND ASSEMBLE THE AVENGERS. I’ll never know what happened to his eye now.

29. Is it too predictable to assume Robert Redford is bad? I don’t want him to be but it feels like that’s how these movies usually go.

30. He’s giving out good guy vibes. But Nick told me, I mean Cap, not to trust anyone…

34. Ugh, Robert Redford. I didn’t want to be right about you.

36. OH DANG — that’s Caleb Nichol from the OC on the Council.

37. I really like their vibe as a hipster couple. SPIN OFF IDEA: they review IPAs and avocado toast and listen to vinyls.

38. “Public displays of affection make people uncomfortable.” “Yes they do.” LOL, I really love them as a couple.

39. This trip down memory lane is a lot for sweet Cap. I kinda want to hug him. (That’s a feeling this whole time, but it’s magnified RN.)

40. IS THAT TECHNOLOGY ANCIENT?!

44. I do love this Sam character though.

45. Falcon…is that gonna be his superhero name?  Comic book people are rolling their eyes at me.

46. Steve and Natasha have such good banter!! Especially coming off of Thor and Jane Porter.

49. The action scenes in this one are so awesome. Like (obviously) they are all unrealistic but they’re so well choreographed and I love these characters so I am buying it.

50. Winter Soldier — rocking a facial covering that covers your nose and mouth since 2014.

53. SAMMY L!!!!! This has been an intense 3 minutes. My heart cannot handle take any more.

54. I v. much understand that Bucky is the Hydra version of Cap, but I hope they can reunite as friends again, and then maybe Bucky can be part of the good guys?

55. The CGI for baby Captain is so insane.

60. Those great looking champagne flutes are from Crate and Barrel just FYI.

62. I am obsessed with the Falcon.

64. Who else would be rocking that long black leather jacket?!

65. HE TOOK THE EYEPATCH OFF. THIS IS TOO MUCH FOR ONE MOVIE.

68. It’s like I KNOW Cap is gonna do it in the nick of time, but I am stressed out regardless.

70. Steve risking his life to save Bucky even though he doesn’t remember him and tried to murder him many times is peak Captain America.

71. “Not like they put the numbers on the outside.” LOL

73. This is like the end of the Notebook when Noah is trying to get Allie to remember him, but more violent.

74. OMG BUCKY SAVED HIM!! He’s not gonna tell though. That would be too easy. I hope we see him again!!

76. Love the idea of Robin Sparkles and Pepps working together at Stark.

77.  I wonder if that bloody guy is important? It’s not Cap or Bucky but I bet whoever it is comes back or they wouldn’t waste time showing us.

78. “Because you need us.” TAKE THAT REX FROM DESPERATE HOUSEWIVES.

83. These nightmare twins….I bet they come back.

85. I love when they say “Captain America will return” at the end.

Just like the first Captain America, I loved it. But this time, I loved it even MORE because I love Natasha and have a new crush on Falcon. The Captain America movies are shot so well, and the action scenes are so cool. Plus they’re fast paced, but not super confusing or ridiculous plots which is great for the Marvel newbie like myself.

I loved the plot twist with Bucky, and was so glad Nick Fury made it out alive. Can’t wait to see what happens next — will Bucky come to the Avengers side? Will I EVER know what happened to Sammy L.’s eye? Only time will tell.

Next up: Guardians of the Galaxy!

Who’s your favorite Avenger? Let us know in the comments!

12 Replies to ““On Your Left!” My Thoughts During My First Time Watching ‘Captain America: The Winter Soldier’”