Beginning October 1st, 2021, Walt Disney World began celebrating its 50th anniversary. This 18-month party is called the World’s Most Magical Celebration, and it’s shaping up to be a fabulous time!

We’re sharing everything about this once-in-a-Disney Park’s-lifetime event so you can plan to join in the fun! Whether you’re admiring the beautiful new décor, waving at your favorite characters in their anniversary finest, or digging into a celebratory treat, it’s time to celebrate half a century of magic!

The big color story of the World’s Most Magical Celebration is iridescence — or rather EARidescence! From massive Cinderella Castle makeovers to character costumes, and from Mickey ears to munchies, guests can see EARidescence everywhere!

Cinderella Castle has had one of the biggest transformations as the World gets ready for its Most Magical Celebration. Since 2020, guests have seen anniversary details appear on the exterior of the Castle, bringing it a sheen and style that kicks the glam up a few notches!

The Castle structure itself received a bit of a pink tone on the upper portion, the trim was painted gold, and the blue turrets are now a more royal shade. The color contrast is stark, but paired with lots of blue and gold swag and an enormous, EARidescent 50 emblem, it’s a statement centerpiece for an iconic celebration.

In fact, all of the Park icons have received a bit of an upgrade as they became Beacons of Magic when the anniversary celebration began on October 1st.

EPCOT began lighting up the night in late-September with “a first-of-its-kind programmable LED lighting system” on Spaceship Earth that Imagineer Zach Riddley shared was invented by Disney Imagineers. Seeing the lighting effect in person is truly magical.

These pinpoints of light bring the Park icon to life along with projections that “[explore] visual poetry” inspired by “the mystery and and wonder of our universe” (thezachriddley).

Click here to see Spaceship Earth as a Beacon of Magic!

Magic Kingdom’s Cinderella Castle gets glam with new projections that bring color and dimension to the new décor that’s already decking out the Castle exterior. The brilliant lighting brings a radiant new contrast to this familiar icon.

Click here to see the Tower of Terror Beacon of Magic!

Finally, the Tree of Life at Animal Kingdom glows with points of light among the branches and projections on the animal carvings that circle the trunk. In an already magical Park, this Beacon achieves a new level of beauty.

Click here to see the Tree of Life at night as a Beacon of Magic!

Click here for photos and videos of ALL FOUR Beacons of Magic!

Beginning in September 2021, guests have been able to spot the Fab 50 memorable Disney characters as golden statues throughout all four Parks.

In fact, Mickey and Minnie are holding court in the hub near Cinderella Castle. But to spot all 50 characters — which include classics like Orange Bird and Lady and the Tramp and new additions like Joe Gardner from Soul — you’ll have to explore all four theme parks — and we’ve got a guide for that!

To take your 50th Anniversary statue experience to the next level, you can grab a MagicBand+ (which debuted in Disney World in July of 2022). With MagicBand+, you can interact with the statues and get them to play music or say certain pre-recorded sayings.

With MagicBand+, you can also play the Fab 50 Quest on the Play Disney Parks app. With that feature, you’ll “collect” the character meetings and interactions with the various statues.

Note, however, that unlocking the interactions with the statues isn’t always easy or perfect.

Click here to read all about our experience testing out MagicBand+

On September 29th, Disney debuted an enhancement to the Monorail. Each train is lit from below with lights that match the color theme of the Monorail itself! Such a fun detail.

Click here to check out this new Monorail enhancement!

If you’re going to the World’s Most Magical Celebration, you’ve gotta be dressed for the occasion, and Mickey and Minnie are the perfect hosts — in EARidescent ensembles, of course! This shimmery style can be seen being worn by characters throughout the celebration

Be sure to stop by Town Square Theater, where you can meet Mickey AND Minnie together in their 50th Anniversary outfits.

Cast Members are essential to the success of the World’s Most Magical Celebration, and they’re sporting some bling-y new nametags to celebrate!

The gold-edged tags have an EARidescent coloration (of course!) and showcase Cinderella Castle with a 50 front and center.

While not strictly speaking decor, EPCOT has taken a huge step forward in its transformation. As of October 1st, 2021, Future World has been renamed; now, it’s three neighborhoods called World Discovery, World Celebration, and World Nature! For the first time, these new names have appeared on the Park map!

Guests will also see the names used on wait time screens in the Park as they navigate the still-evolving spaces of Worlds Celebration, Discovery, Showcase, and Nature.

The so-called 4D attraction uses trackless ride vehicles, impressive on-screen action, and a larger-than-life ride-through to shrink riders to the size of rats and send them on a pint-sized adventure through Gusteau’s kitchen.

Click here to go INSIDE Remy’s Ratatouille Adventure with us!

When you’re done working up an appetite on Remy’s Ratatouille Adventure, you won’t have to go far to get a bite to eat. La Creperie de Paris also opened on October 1st!

This combination Table Service and Quick Service restaurant offers a menu of galettes (buckwheat crepes typically served with savory fillings) and crepes (many filled with indulgent sweet flavors) to give you the boost you need to explore the rest of the 50th celebration!

Get a look inside the creperie here!

Throughout the Parks and Resorts, anniversary-themed treats and dining collectibles started appearing on October 1st, 2021. Food and drinks include “theme park classics and some of Walt Disney’s favorite items.”

Disney has said that 150+ new items will be available throughout the 18-month-long celebration, including an EARidescent Croissant Donut (found at EPCOT), Cheese Fries with Walt’s Chili (at Animal Kingdom), and the Magical Beacon Cocktail (at select Table Service spots property-wide)!

Guests can also buy themed collectibles with a food twist, like popcorn buckets, sippers, and mugs!

Want to see over 150 anniversary bites and beverages in the Parks and Resorts? Click here!

You’ve GOT to see this spectacular 50th anniversary treat!

Disney Enchantment features a stunning fireworks show and precise projections that include the iconic Main Street for the first time ever!

The show blasted off for the first time on October 1st, 2021, “tak[ing] you on a journey filled with adventure, wonder and empowerment.” Check out the opening night crowds at Magic Kingdom for Disney Enchantment!

Click here to see more photos and videos of Enchantment

EPCOT’s long-awaited nighttime spectacular replaced the temporary EPCOT Forever fireworks, which replaced the beloved IllumiNations back in 2019. When Harmonious began with a soft opening on September 29st, 2021, it officially started a new chapter in EPCOT’s nighttime entertainment. The show incorporates lasers; lighting enhancements; pyrotechnics; and massive floats for water effects, projections, and more.

Click here to see Harmonious in action — with photos and video!

Animal Kingdom debuted KiteTails on September 29th for a soft open. This daytime show features GIANT kites soaring above the water, all to the tune of popular Disney songs. But these aren’t your average kites!

Massive kites of beloved characters like Simba, Baloo, Zazu, and King Louie bring colorful and dynamic energy to the show. Note, however, that Disney has CHANGED the way you watch this show and it is now more of a walk-by experience that can be seen from anywhere around the Discovery River Lagoon.

Cavalcades have become a joyful addition to the Parks, and during the World’s Most Magical Celebration, Mickey’s Celebration Cavalcade brings out Mickey, Minnie, and some of their closest friends — all in the fashionable EARidescent colors of the 50th!

Character Appearances at the Resorts

Can’t get enough characters? Keep your eyes peeled at your Walt Disney World Resort hotel, too! Characters will be making surprise appearances throughout the 50th Anniversary celebration.

They likely won’t appear on a set schedule, but check with your front desk to see if they can give you a heads up on an impending visit!

Click here to see the fabulous bus that carries the characters in style when they visit the Resorts!

“The Magic is Calling” Anthem

Disney films and Parks are nothing without the iconic music behind them, and that’s no different for the 50th anniversary. Disney commissioned an anthem just for the celebration. The song is titled “The Magic is Calling”, and it was created by platinum-selling songwriter and music producer Alana Da Fonseca in partnership with composer Emily Bear and singing sensation Journi.

Disney shared a small preview of the song in the video below:

Guests visiting the Parks during the World’s Most Magical Celebration can hear “The Magic is Calling” during Beacons of Light transformations and as part of entertainment experiences like EPCOT’s Voices of Liberty, Magic Kingdom’s Dapper Dans, and Animal Kingdom’s Discovery Island Drummers.

For the 50th, the show has added “new whimsy with a towering castle, swirling pixie dust and a version of…The Magic Is Calling, recorded in the pageant’s iconic electro-synth-magnetic sound.” A lovely Cinderella Castle float has been added, bearing (of course) a bright 5-0.

Why celebrate your 50th anniversary with one merchandise collection when you can celebrate with TONS of collections?! Walt Disney World has been releasing new collections and new merchandise throughout the celebration, bringing both shimmery new EARidescent items as well as retro throwbacks. 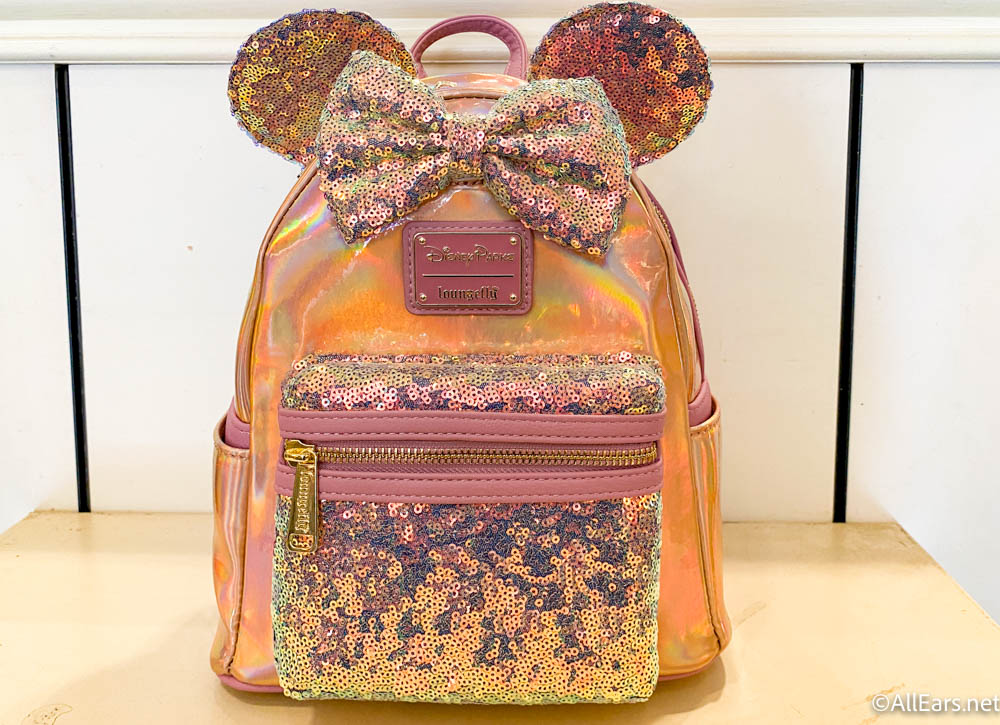 Since that time, we’ve also seen a Vault Balloon Collection…

Click here to see ALL of the 50th Anniversary merchandise you can get online!

Treats are continually updated, new merchandise keeps getting released, and other updates keep getting made all throughout Disney World as part of the 50th Anniversary celebration. We’ll continue to update this page with the latest news so check back with us for more updates!

Join the AllEars.net Newsletter to get the free list of 50 Ways to Celebrate Disney World's 50th Anniversary! Click here to get started!