Since it opened in Disneyland Park in July of 1955, Jungle Cruise has become one of the most iconic attractions in Disney’s theme park catalogue. Everything from the distinctive ride vehicles, comical tableaus, animatronic animals, and even the purposely over-the-top skipper spiel have become iconic elements of the Disney theme park experience, explaining why the Jungle Cruise has been cloned to nearly every Disney resort around the world.

However, despite its beloved stature, the attraction has met its fair share of controversy over the years, which has led to numerous changes, including a major refurbishment in 2021.

To analyze this attraction’s controversial history, we must first look at its origins, years before Disneyland was constructed.

The origins of the Jungle Cruise can be traced back to the late 1940s, when Walt Disney Pictures began production on their True-Life Adventures series. Beginning with Seal Island in 1948, these somewhat staged wildlife documentaries followed various groups of animals in their natural habitats. The series was so successful with movie-goers and critics that it eventually evolved from two-reel shorts to full-length documentary films that quickly became a cornerstone of Walt Disney Studios.

With the immense success of True-Life Adventures, Walt Disney planned on including something related to the series in his Mickey Mouse Park from the beginning. As Mickey Mouse Park evolved into the concept of Disneyland, the idea of a section of the park themed to the documentary series was retained. Scheduled to be called True Life-Adventureland (later shortened to Adventureland), the land’s centerpiece attraction was to be a “jungle river cruise” boat ride. As the construction phase of Disneyland began, plans for the river ride were solidified. Walt’s initial plans to have real animals – yes, really – was quickly nixed for logistical reasons. Instead, the ride, principally designed by Imagineer Harper Goff, would feature animated animal  and “native” figures with “lifelike” movements. In retrospect, these figures were forefathers of the Audio-Animatronics that Imagineering would develop a decade later.

Guests would view the animals from skipper-guided ride-vehicles modeled after the titular boat from the 1951 hit film The African Queen, while traveling through a jungle designed by Disneyland landscape extraordinaire Bill Evans.

Welcome to the Jungle

Jungle Cruise opened with the rest of Disneyland on July 17, 1955. However, a modern guest would be hard-pressed to recognize much of the attraction. Sure they would be familiar with Goff’s general concept, and if they squinted they could imagine how the rather light jungle Evans planted would grow into the lush greenery seen today, but many iconic elements of the attraction would be absent. There was no ad-libbed humor from the skippers, who played the entire experience straight. In fact, there was no humor period. 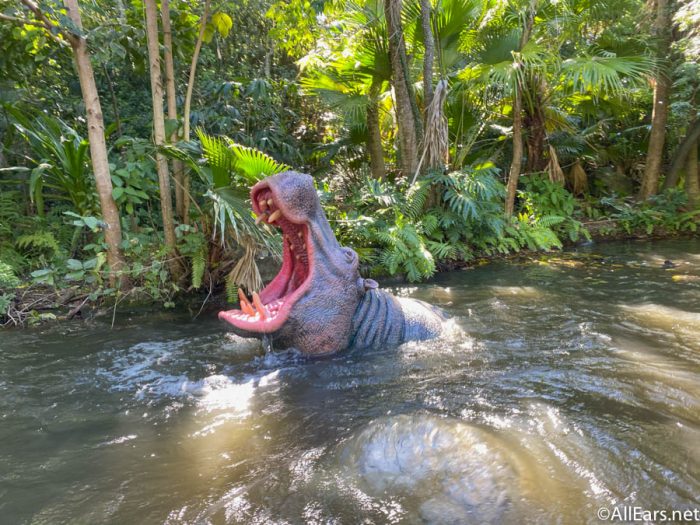 The Jungle Cruise, like Disneyland overall, was a massive success upon its opening, quickly becoming an integral part of American pop culture. However, as the park’s first decade came to a close, Walt Disney felt his park needed some new blood. According to legend, he once overheard a child ask his mother to ride the Jungle Cruise and was aghast when the mother responded that they’d ridden it last time and didn’t need to again. Whether this story is apocryphal or not, in the early 1960s Walt brought over animator Marc Davis from the Studios to “plus up” some of Disneyland’s attractions.

One of the first attractions Davis – who would go on to become one of the company’s most influential Imagineers – worked on was Jungle Cruise. A visual comedian by nature, Davis decided to liven up the attraction by adding the playful elephant pool and comical trapped safari sequences.

These comedic elements in-turn influenced the ride’s skipper narration, which became more and more comical over the years. Davis’ changes led to the attraction becoming even more popular. 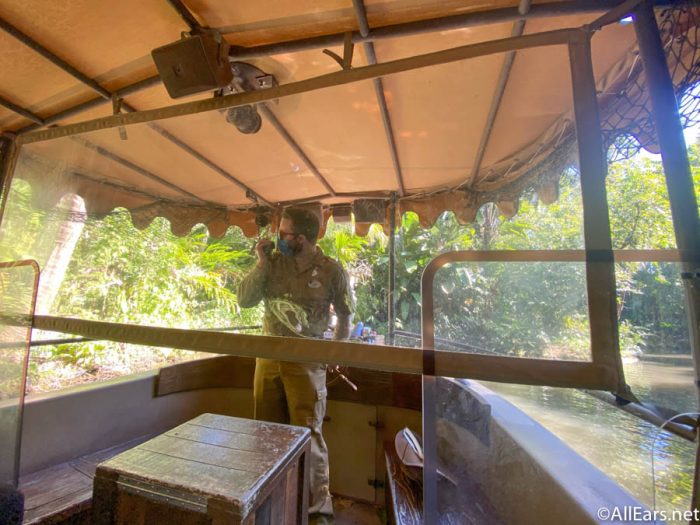 The Jungle Cruise’s status as one of Disney’s premier attractions was further solidified when a version of the ride opened with Walt Disney World and Magic Kingdom in 1971.

The Orlando version of the ride was similar to its Anaheim counterpart, though not a direct clone, and served the same purpose as the anchor attraction of the park’s Adventureland section.

A near-direct clone of the Magic Kingdom version of the attraction opened with Tokyo Disneyland in 1983, but when Disneyland Paris, then known as EuroDisney, opened in 1992, the park became the first “castle park” not to feature a Jungle Cruise on opening day. This was due partially to the cold French climate not being hospitable to water rides and partially because there were several knockoff Jungle Cruises already built at various French amusement parks.

The attraction’s international expansion got back on track in 2005, when a vastly different version of the Jungle Cruise opened with Hong Kong Disneyland. Differences included a route that circumnavigates Tarzan’s Treehouse and features a grand finale that culminates in a battle between angry fire and water gods.

While these alternate versions of the Jungle Cruise were being built around the world, the Disneyland original continued to be “plussed” over the years. Throughout the 1960s and 70s, various new animals and show-scenes were added to the attraction. The biggest changes up to that point came in 1994, when the attraction was rerouted and shortened to make room for the then-upcoming Indiana Jones Adventure attraction. In addition, the ride (and the entirety of Adventureland) were rethemed to be set in the 1930s to tie into Indy.

While these changes were substantial, they were nothing compared to the original plans, which were going to see a portion of the Jungle Cruise take place inside the Indiana Jones show building, as part of a plan to build a massive complex that would house four attractions.

Following these mid-90s refurbishments, the Jungle Cruise continued to be one of Disney’s marquee attractions. As a testament to said importance, in 2013, both American versions of the attraction were given a holiday overlay and temporarily renamed The Jingle Cruise.

The overlay was so successful that it was greatly expanded for 2014, and remained in both parks through 2016. For reasons unknown, Disneyland dropped The Jingle Cruise from its Holiday offerings in 2017, though the overlay remains a Magic Kingdom staple to this day.

Controversy in the Jungle

Despite Jungle Cruise’s ongoing popularity, in recent decades the attraction has become controversial due to its purported negative depictions of native people, specifically the “headhunter” party as well as the Trader Sam “head salesman” character. 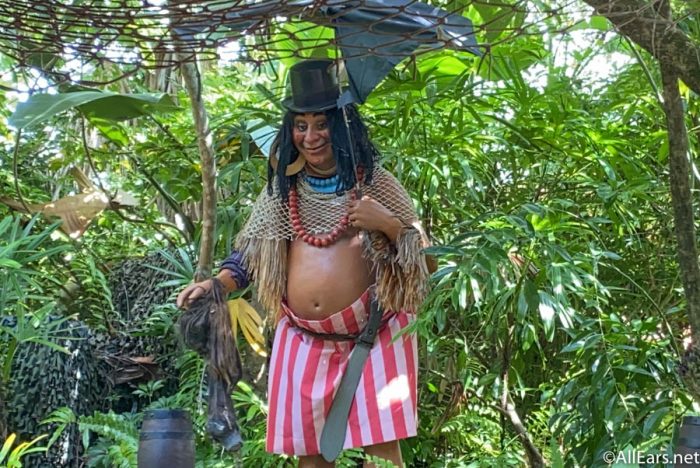 In January 2021,  Disney announced that it would be making significant story changes to the Jungle Cruise at both Disneyland and Walt Disney World to alleviate these issues. Carmen Smith, creative development and inclusion strategies executive at Walt Disney Imagineering, explained the changes in a statement to the Los Angeles Times, saying:

As Imagineers, it is our responsibility to ensure experiences we create and stories we share reflect the voices and perspectives of the world around us. With Jungle Cruise, we’re bringing to life more of what people love – the humor and wit of our incredible skippers — while making needed updates.

Disney Chief Executive Bob Iger added, “The exciting changes we’re making to one of Disney’s most popular classic attractions, Jungle Cruise, reflect our commitment to creating unparalleled experiences that reflect, not only the best in storytelling, but also the values and rich diversity of our world.”

As part of these announcements, Disney made it clear that these changes to the attraction were not going to be related to the upcoming film based on the attraction.

Said film, simply titled Jungle Cruise, was released in July of 2021. The film starred Dwayne Johnson, Emily Blunt, Édgar Ramírez, Jack Whitehall, Jesse Plemons, and Paul Giamatti and was directed by Jaume Collet-Serra. It was such a hit, a sequel is already in the works.

Turn the pages on more Disney history at the links below.