Listen, we love Disney movies. There is nothing better than seeing that firework shooting over Cinderella Castle symbolizing a cinematic journey is about to begin.

We love The Lion King, think Toy Story is terrific, and are memorized by Mulan. But… we have some minor quibbles. And no: not of the magic isn’t real genre. ‘Cause we totally believe in magic. And talking animals.

No, these quibbles are more of the storytelling sense.

Here are the biggest plot holes from our favorite Disney movies.

1. Simba would be incredibly malnourished.

I fully accept that Scar maliciously schemed to murder his brother and take over the throne. I can also accept that a warthog and a meerkat are BFFs who can seriously carry a tune. But what I cannot accept is that Simba could survive on bugs and grow from a cub into a healthy full-size male lion.

You probably know this already, but lions are big. Like, real big. And they need a ton of calories (thousands every day!) and protein to become and stay real big.

You might be thinking, “but bugs are a great source of protein!” And you’re right. But do you realize how many bugs Simba would have to consume to get the right amount of calories and protein? I do. I did the math.

According to the Kruger National Park website (one of the largest game reserves in Africa), the average lion feeds every 3 to 4 days. While they can consume up to 50kg in one feeding, if you were to average it out, most lions eat about 5 to 7kg a day (about 11 to 15 lbs). And with further research, I’ve learned that this translates to about 7,000 to 9,000 calories a day.

Picking an average size bug for our analysis, I’ve also learned that crickets are about 120 calories per 100 grams, and the average cricket weighs .5 grams. This means the typical cricket is .6 calories.

That means, on the low end, Simba would have to consume over 11,667 BUGS A DAY. Can he even find that many? Would he have time to do anything else but eat? If he could find that many, would there be any leftover for Timon and Pumbaa??

I’m not buying it. Even if he did survive on bugs, I highly doubt he would consume enough to be as fit and muscular as he appears and not incredibly malnourished.

Once again, we are fully on board with a Fairy Godmother and magic. So we totally love that she appears during Cinderella’s time of need to provide her a gorgeous gown for the ball — not to mention turn pets and produce into transportation and servants.

But Fairy Godmother clearly states that at midnight, the magic will all go away. And it does: her dress becomes tatters again, the coach turns back into a pumpkin, and her servants? (employees? helpers? What are they?…guess that’s not the point) resume their original animal forms. BUT NOT HER ICONIC SHOES.

No, her glass slippers remain intact — one remains in Cinderella’s possession, and one is left at the Castle for the prince to find. And you know the rest of the story. (Side note, how did not a SINGLE other lady in the kingdom have the same size shoe as Cinderella?! Especially considering the official slipper in the Magic Kingdom’s Cinderella Castle Suite is a size 8, which is a very common shoe size. I should know; they never have anything good left for me at sales.)

But back to the shoe…was there some kind of secret Shoe Exception Clause we don’t know about?! Seriously, someone explain this to me.

3. How did Mulan get away with it?

Listen, I love Mulan. She’s fearless and brave, and she literally saves China. But come on: how did no one realize she was a woman?

This is Mulan as Mulan.

This is Mulan as Ping.

Her jaw line physically changes and becomes more angular when she’s Ping. Is she just really good at contouring? If yes, can she make a YouTube video showing us how, cause wow, we’re impressed.

4. Does Belle have super strength?

In one of the most dramatic Disney movie scenes ever, the Beast fights off a pack of angry wolves to save Belle, despite the fact she just ran away from him. Exhausted from his fight, the Beast collapses into an unconscious heap, and Belle takes him back to the castle instead of escaping with her freedom. 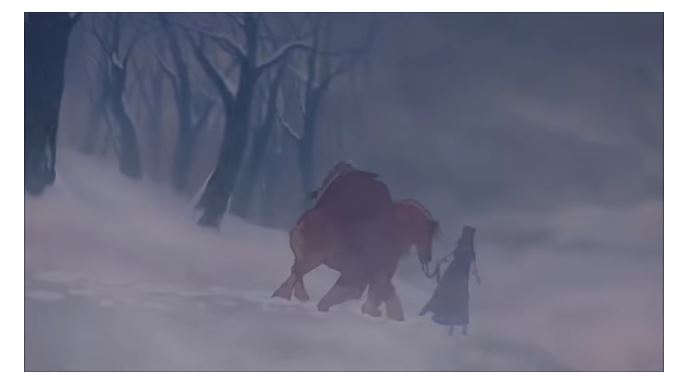 But how on Earth did she get him on the horse? He’s like 8 feet tall and part gorilla, part buffalo, part lion. Did Philippe kneel down and scoop him up or something? But even if Philippe did kneel down, wouldn’t Belle have had to roll him on there? Is this one of those adrenaline can lead to a woman lifting a car to save her trapped child moments? Or is Belle just jacked?

We may never know.

We can all agree that Ariel signed away her voice to Ursula, but we have a big (yet obvious) question: why didn’t she just write Eric a note to explain what’s going on?

We’ve read the contract (thanks to a close up), and it says NOTHING about being able to write whatever you can want. It says she owes her a voice for all eternity, then some mumbo jumbo (and a hidden Mickey) in a made up nonsense language.

Unless that mumbo jumbo means you can’t write Eric a note that says “Hey, buddy, it is me, Ariel. I lost my voice singing too loud at an Undersea Rock Concert. But I’d really like to smooch right now,” then she has no excuse. She can clearly write considering she signs her name on the contract!

Maybe she’s just not that smart, but come on, woman. A little pen to paper could’ve saved you a whole lot of trouble.

At the end of the day, we love Disney movies (plot holes and all!) and can’t get enough of them. We only joke because we care. 🙂

Have you ever noticed a plot hole in a Disney movie? Let us know in the comments!

8 Replies to “Big Plot Holes in Our Favorite Disney Movies”