It’s been another full week of eating and drinking our way around Walt Disney World!

This week, one Disney park majorly won us over with their snacks and we found a boozy twist on one of the most iconic Disney World desserts (spoiler: it’s Dole Whip!). You might be surprised that we’re still standing after you see all the tasty things we tried, so let’s get to it!

Here are the 5 BEST things we ate (and drank) in Disney World this week!

We’re starting off with an Earth Month snack from Creature Comforts in Disney’s Animal Kingdom. Appropriately named the Honey Bee Cupcake, this dessert features an orange cake with honey Bavarian filling, topped with honey frosting and a white chocolate honeycomb!

The cupcake itself was definitely on the sweeter side, but the mix of the honey and orange flavors made this one a top choice for us! You can find it in the park this month for $5.99!

We’re staying in Disney’s Animal Kingdom for this next one! Dawa Bar serves up a variety of specialty cocktails and we noticed a new one when we were passing by called Lion’s Fury. This drink is made with Red Stag Cherry Whiskey, and Tropical Jungle Juice and then topped with a float of Fireball Cinnamon Whiskey and a Glow Cube.

Fair warning on this one — it is BOOZY! The cherry whiskey and fireball flavors really pack a punch, but it mixes with the fruitiness from the jungle juice well. You can give it a try for $16.

As we said, Disney’s Animal Kingdom was winning with the snacks for us this week! As we made our way around the park, we spotted a new Raspberry Streusel Muffin at Ace Mobile Treats for $3.99. It isn’t the most photogenic food we’ve ever tried, but it was one of the best!

The muffin itself is super soft and easy to eat (though it does fall apart pretty easily). Plus, the raspberry flavor adds a bit of tartness to the sweet snack, making it something that would serve as a nice breakfast or snack to hold you over to your next meal.

Now onto one of the most outrageous things we ate this week — the Wildberry Cake Pop Shake. This was a new menu item at Beaches and Cream Soda Shop at Disney’s Beach Club Resort and is massive! The shake itself would prove to be a pretty huge dessert in itself but then it’s topped with THREE cake pops (that taste a lot like the one from Starbucks). 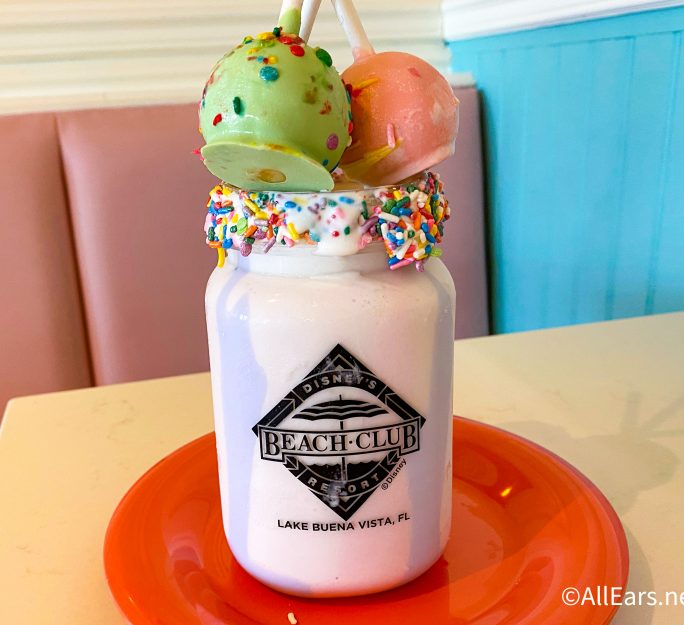 This one is certainly shareable (though, we aren’t ones to share our ice cream) and you get to keep the cup as a souvenir! This decadent dessert is going to cost you a pretty penny though — $15 to be exact.

The last top eat from the week is one that you may unknowingly miss if you aren’t paying close attention to the menu. Splitsville Luxury Lanes opened a new outdoor bar this week and the menu now features a specialty drink — the Frozen Pina Colada. But, this drink is more than just your average pina colada! It is a premixed drink that features Dole Whip (!!), Coco Lopez Bacardi Superior, and Rumhaven Coconut blended and topped with a splash of Plantation Double-Aged Dark Rum.

You read that right — it’s basically a boozy Dole Whip drink! The drink itself is, at its core, a classic pina colada, but the Dole Whip flavor really makes this one extra tasty and worth a try. You can get a 16 oz drink for $13 or a 20 oz for $20.

We know, we know — that’s a LOT of sweets for one week! But, hey, we can’t help ourselves! If you’re planning a trip to Walt Disney World soon, give these a try and let us know what you think! And, as always, stay tuned for more on the latest Disney eats and drinks.

How Many of These Underrated Treats Have You Tried in Disney World?

What is your favorite Disney dessert? Let us know in the comments!

2 Replies to “Did We Just Find The BEST Disney Park For SNACKS?!”