Back in March, Universal revealed the dates for this year’s Halloween Horror Nights events. They will be taking place on various days throughout September and October.

We’ve also gotten a sneak peek at what houses will be available this year, like one about The Weeknd, a Halloween house, The Horrors of Blumhouse, and Universal Monsters: Legends Collide. There are also already Halloween decorations showing up in the parks!

Plus, as if Halloween Horror Nights wasn’t enough, Universal Orlando also announced a brand new Halloween offering that will debut this year! It’s called Universal Monsters Gallery of Legends and is a Universal Monsters-themed photo gallery experience that is available for guests at Universal Orlando’s hotels only. It will be located in the Spooky Swizzle Lounge at Universal’s Cabana Bay Beach Resort and will be available from September 2nd to October 31st.

…to pieces of jewelry…

There are seriously so many new items, and more items will likely be available as we get close to the first night of the event.

Click here for a full look at the Halloween Horror Nights merchandise at Universal Orlando!

There were also some construction walls up at Toon Lagoon. 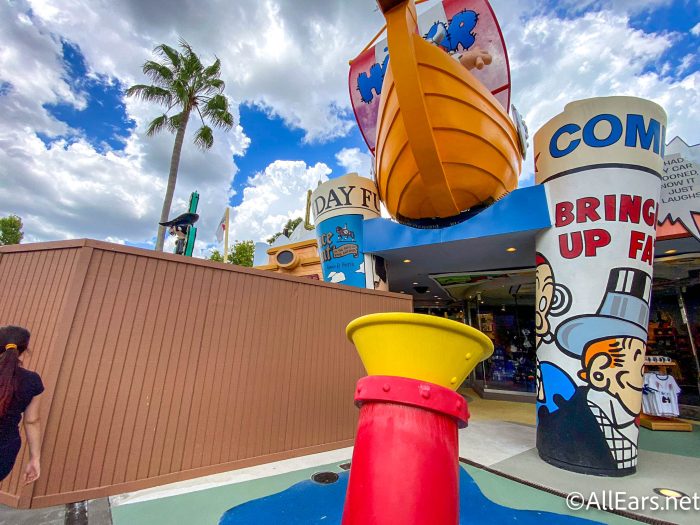 Toon Lagoon is one of the areas at Islands of Adventure and is themed after comics and cartoons. It’s where you’ll find Dudley Do-Right’s Ripsaw Falls as well as some comic character meet-and-greets.

Have you ever tried a Butterbeer at Universal?

When we were there recently, we confirmed that you can order Butterbeer without the foam topping. The topping is what makes it true Butterbeer, however, as it’s a butterscotch-based foam. Without that foam, the drink is essentially cream soda.

We also saw a ton of new merchandise, including some unique and interesting Loungefly backpacks. We saw this Jurassic Park Loungefly at Jurassic Outfitters. It is bright and colorful, has the DNA strand from the movie, and says “Bingo! Dino DNA.” It is $82.

And our final Loungefly backpack is this Grinch backpack that we saw at Gertrude McFuzz Fine Feathered Finery. It is green and fuzzy and available for $82.

We also saw this Honeydukes makeup bag for $40.

And Disney World isn’t the only park that’s killing the popcorn bucket game. We saw this Minion on a Float Popcorn Bucket, at the Universal Studios park!

This minion looks like he is ready for vacation with his bathing suit on and unicorn pool floaty. You can grab this popcorn bucket for $24.99.

If you’re planning a trip to Universal Orlando, we have lots of resources available to you. Click here to see how you can do everything in Harry Potter world in one day, or you can click here to see six things you’ll want to pack in your Universal park bag that you wouldn’t necessarily bring to Disney World. We’re always on the lookout for more Orlando theme park news, so make sure to stay tuned to AllEars for the latest!

Join the AllEars.net Newsletter to get the free list ranking rides at Universal Studios Florida! Click here to get started!

What’s your favorite thing to do in Universal Orlando? Let us know in the comments!