The Disney Wish, Disney’s newest addition to the Disney Cruise Line, made its world debut and we have all of the information for you!

This newest ship has several new restaurants, the Aquamouse, a Walt Disney Theater, two movie cinemas, and so much more. One thing we’re excited to see? What characters we’re sailing with!

We were invited to go aboard the Disney Wish so we can tell you firsthand what characters you’re going to find on board.  First, it wouldn’t be a Disney Cruise without Captain Minnie aboard!

Captain Minnie is dressed in her bright red sailor’s jacket and captain’s hat so you can never forget who’s in charge on this boat! And Captain Minnie couldn’t sail without her favorite co-captain, so Mickey Mouse came along as well.

Mickey looked extra ready for the ocean in his blue sailor’s jacket and matching captain’s hat. Mickey and Minnie couldn’t bare to sail without their best pals, though, so Goofy, Donald, Daisy, Chip, Dale, and Pluto also made an appearance! 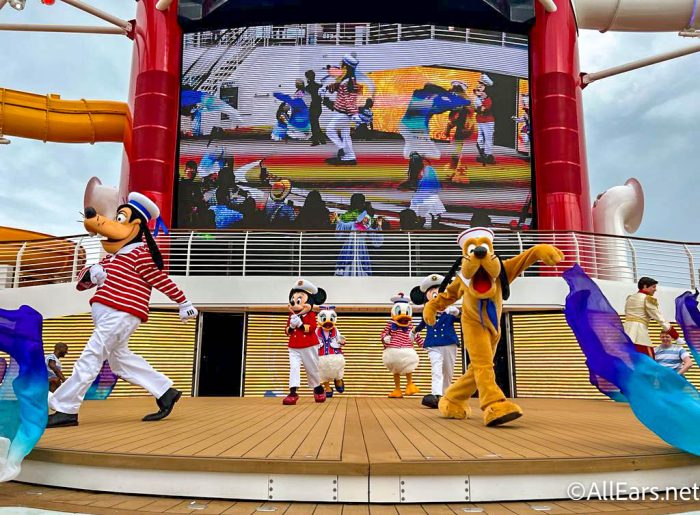 If you’re looking for a few friends to share some adventures with, we also spotted a few heroes at the Worlds of Marvel, Disney Cruise Line’s first Marvel dining experience. Ant-Man and the Wasp were hosting the meal.

More Marvel friends could be found at the Marvel Superhero Academy (part of the Disney Oceaneer Club for kids ages 3 to 12), including Black Panther and Spider-Man.

Also part of the Disney Oceaneer Club is Princess Fairytale Hall, where guests will be able to read books with Belle, learn ice powers with Anna and Elsa, and do arts and crafts with Rapunzel.

The princesses could also be found in the atrium of the ship, greeting guests when they boarded. And during the Sail Away Party, we saw Tiana and Naveen, Cinderella and Prince Charming, Rapunzel and Flynn, and Moana!

The princesses weren’t the only ones bringing a bit of a fairytale on board. We also spotted the Fairy Godmother granting a few wishes from the balcony in the atrium as we boarded the ship while a Cinderella statue greeted guests. (Look for Jaq, Gus Gus, and Lucifer nearby!)

At the Star Wars Galactic Creature Keepers kids’ club, Chewbacca and Rey will come in and help kids learn how to feed and take care of creatures from a galaxy far, far away.

Later, Anna, Elsa, Olaf, and Kristoff made sure to join us for dinner where we saw them at the Ariendelle: A Frozen Dining Adventure. And they brought along their friend Oaken as well!

And at Pirate night, we saw Captain Redd, Jack Sparrow (sorry, Captain Jack Sparrow), and the Fab 5 gang dressed in their Pirate best.

There are several designated areas for meeting more characters on the Wish, and don’t forget that you can also find Disney friends at Castaway Cay! We said hello to Goofy while we were there.

Seeing so many familiar faces and friends on The Wish made this cruise even more fun! And the surprises didn’t stop at just the characters. From new restaurants to new entertainment, The Disney Wish has a lot to offer.

Want to see what else we found on the Disney Wish? Click here!

Join the AllEars.net Newsletter to get the free list of 50 tips for going on a Disney Cruise! Click here to get started!

Which characters are you most excited to see on The Wish? Tell us in the comments!

Disclosure: We were invited by Disney Cruise Line to attend a media event for the Disney Wish. This did not affect our reporting of the event — our opinions are our own.