The Disney on Broadway Concert Series is one of our favorite parts of Epcot’s International Festival of the Arts. When we last reported on this showstopping series, several dates had yet to be announced. 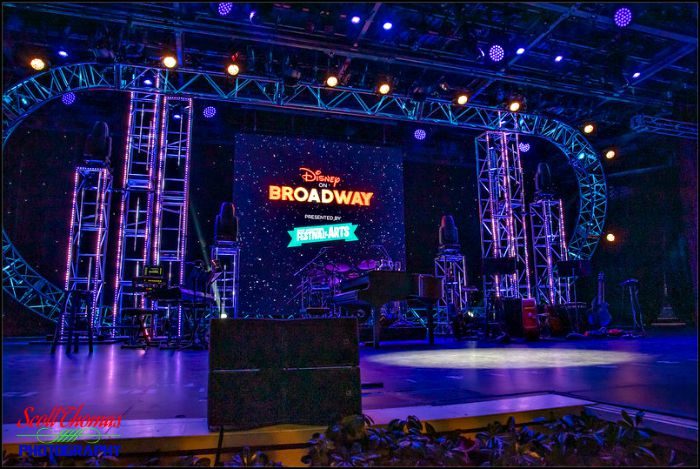 But now two more pairs of performers have been announced to belt out tunes on the American Garden Stage in early 2020!

The first new pair is Liana Hunt and Adam Jacobs. Hunt is best known for her role as Belle in Beauty and the Beast, but that’s far from her only Disney credit! She also played the role of Katherine Plumber, the intrepid female lead in Newsies! Jacobs is best known for playing the titular character in Aladdin, as well as the role of Simba in The Lion King. Interestingly, both Hunt and Jacobs have experience playing major roles in Les Misérables: Hunt as Éponine and Jacobs as Marius. Perhaps this is a sign of some musical chemistry?

Hunt and Jacobs will perform on select nights on January 27 through February 8 before joining Kara Lindsay (Mary Poppins, Newsies) and Kevin Massey (Tarzan) for a final quartet performance!

Our next pair of performers is Sydnee Winters and Michael James Scott. Winters is best known for playing Nala in the original Broadway production of The Lion King, though she also has credits in the hit musical Hamilton. Scott is best known for his role as Genie in Aladdin. They’ll be performing on select nights from February 11 to 21, before joining Ashley Brown (Mary Poppins) and Josh Strickland (Tarzan) for the final performance of the season on February 24.

You can catch these performances at the American Adventure Pavilion in Epcot during the festival, or secure your seat by booking a Concert Series Dining Package! You can find all the dates and book your tickets on the official website.

Excited about the new performers? How about you sing us a little tune in the comments below!

And be sure to browse our Festival of the Arts food booth menus here!