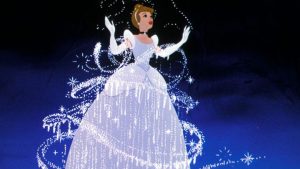 Cinderella to be Added to National Film Registry

Posted on December 14, 2018 by Sarah Sands
It has just been announced that the Disney animated classic film Cinderella is one of 25 films being added to National Film Registry this year. Cinderella joins other Disney films including Snow White and the Seven Dwarfs, Dumbo, Bambi, The Lion King, and shorts including Steamboat Willie on the Registry. A total of 21 Disney (created or acquired) films are on the list of 750 films.
No Comments Posted on March 14, 2015 by AllEars
Warning: Limited spoilers ahead Disney’s live-action version of the fairytale classic “Cinderella” finally opens this weekend after much publicity and cross-promotion by the media giant. And it’s a charming retelling of the well-known story — one that keeps viewers’ attention, for the most part, and leaves us satisfied with the ending. Obviously, the biggest hurdle … Continue reading "Movie review: Disney’s Cinderella and Frozen Fever"
5 Comments