What do you get when you combine one of the best known attractions Disney Imagineers have ever produced – The Haunted Mansion – with one of the company’s most beloved cult classic films – Tim Burton’s The Nightmare Before Christmas? Only just one of the most successful… and controversial holiday season offerings in Disneyland history: Haunted Mansion Holiday.  How did this macabre combination come to be? Let’s find out… after just a wee bit of backstory.

Since the Disneyland version of the attraction opened in 1969, The Haunted Mansion has been one of Disney’s premier E-Ticket attractions. Versions of the ride appear at nearly every Disney Resort around the world, including relatively direct internal clones in Walt Disney World  and Tokyo Disneyland as well as the looser interpretations Phantom Manor and Mystic Manor at Disneyland Paris and Hong Kong Disneyland respectively.

Given the Mansion’s popularity, it only makes sense that Disneyland chose to leverage the Mansion’s popularity into a Holiday offering (as had been done with Country Bear Christmas Special and It’s a Small World Holiday) at the turn of the 20th century. Initially, Imagineers toyed with overlaying the Mansion with either a version of Charles Dickens’ A Christmas Carol or a story starring Santa Claus. However, it was eventually decided that neither would fit with the Haunted Mansion. Instead, they decided to use a cult Disney film instead: A Nightmare Before Christmas.

Tim Burton first conceived A Nightmare Before Christmas  in the early 1980s as a poem. Over the next decade, Burton refined the story of “Pumpkin King” Jack Skellington’s takeover of Christmas Town, and in 1991 he entered a deal with Disney to produce the film using stop-motion animation. Released in 1993, the film earned critical acclaim and grossed $89.1 million, making it a moderate hit. In the years after the film’s release, it earned a large cult following thanks to its slightly tongue in cheek dark themes and catchy songs. 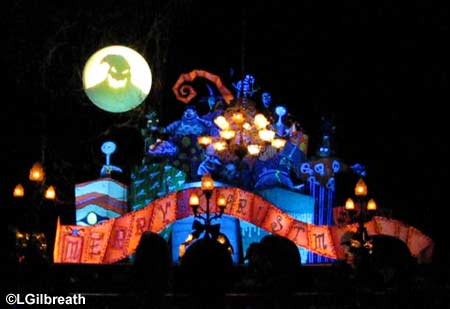 With Burton’s film only gaining in popularity and its macabre yet comical nature fitting with the Haunted Mansion’s aesthetic, Imagineers felt it was the perfect property to overlay the attraction for the holiday season. They crafted a storyline featuring Jack Skellington deciding to “spread joy” to the 999 “happy haunts” who reside in the Mansion. Animatronics of characters including Jack, Sally, Zero, Oogie Boogie, and other residents of Halloween Town as well as Christmas decorations are integrated into the attraction’s famous scenes, while the traditional soundtrack is replaced by one inspired by the film.

Haunted Mansion Holiday opened for the first time on October 3, 2001, and it was an instant smash hit. Die hard fans of Disneyland and Burton’s film alike flocked to the attraction, waiting in queues hours longer than normal to experience it.

This initial success led to Haunted Mansion Holiday becoming an annual tradition at Disneyland, though not without some controversy. As the years have gone on, some guests have complained that the Haunted Mansion Holiday overlay lasts too long, with its near-four-month-run (plus roughly two months of conversion time) meaning that the classic Haunted Mansion is unavailable for roughly half the calendar year. However, the overlay still attracts long waits and positive reviews overall.

While some Disneyland fans are upset about getting “too much” Haunted Mansion Holiday, many on the other side of the country are mystified why they’ve never had any. Despite Tokyo Disneyland’s Haunted Mansion first receiving the seasonal overlay in 2004, it’s near been installed at Walt Disney World in Orlando, despite requests from many east coast Disney fans who would love to see the overlay.

Thanks to its melding of an iconic attraction and a cult classic film, Haunted Mansion Holiday has not only become the most successful seasonal overlay in Disney history, but its been a beloved part of Disneyland for nearly two decades.

Are you a fan of Haunted Mansion Holiday? Would you like to see it replicated at Wal Disney World, or is the Disneyland version more than enough? Let us know in the comments below.