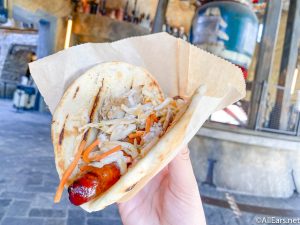 Posted on August 15, 2020 by Janelle Sheetz
Disney’s Hollywood Studios is one of our favorite Parks to visit — and it’s not just the movie magic in the attractions that’s got our hearts! Besides joining the Resistance, tagging along with Mickey and Minnie, and checking out the shows, we also love the food in this Park!
One Comment Posted on May 10, 2017 by AllEars
I’m a tad embarrassed to admit this to you, but Disney’s Hollywood Studios is probably the park I have photographed the least. That face became abundantly clear when I realized I have very few older photos of good ole’ “MGM”. However, I DO have a press kit from WALT Disney Imagineering dated 1989, that has … Continue reading "Disney Pic of the Week: Hollywood Blvd"
No Comments Posted on May 9, 2017 by Scott Thomas
Things change at Walt Disney World over time. Right now a lot of things are changing at Disney’s Hollywood Studios. A few years ago a big change occurred all over Walt Disney World when Kodak, a long time sponsor, was replaced by Nikon. This changed all the Picture Spots and the photography store on Hollywood … Continue reading "Disney Pic of the Week: Hollywood Blvd."
No Comments Posted on October 9, 2012 by Jack Spence
I’ve created a second “Common Bonds” quiz. Here is a reminder of how the game is played. I will be giving you three words or phrases that have something in common. It will be your job to figure out where at the four Walt Disney World theme parks these words would all be applicable. For … Continue reading "Disney Common Bonds 2 – Answers"
6 Comments NEWS: Disney World Has Announced That 6,700 Non-Unionized Employees Will…