Space: The Past and Future of the Final Frontier at Disney Theme Parks

“Space, the final frontier…” is not only the opening narration for most installments in the Star Trek franchise – one of the top two or three pop culture franchises not currently owned by Disney (but that’s another topic for another time) – it’s could also arguably be used as the slogan for the past and the future of attractions and experiences at Disney’s theme parks.

The grandness of space has always fascinated human beings, who’ve looked to the stars in wonder for millennia and wondered what other planets were like, what (if any) alien creatures inhabited them, and how humanity could eventually reach them. This interest in exploring space only grew over the centuries as humanity explored and mapped seemingly every corner of the Earth, making space the last “frontier” left to be explored.

There was perhaps no period where space exploration was more at the forefront of pop culture than the so-called space race between the United States and Soviet Union. This Cold War-influenced competition between the two nations permeated everything from television, films, comic books and even the Disneyland television series, which featured several animated episodes depicting realistic space travel.

Given that the park was developed during this period, it should come as no surprise that space played a major part in Walt Disney’s conception of Tomorrowland, one of the Happiest Place on Earth’s original lands. Tomorrowland’s marquee attractions on opening day included the rocket ship-themed Astro Orbiter spinner and Rocket To the Moon, a very rudimentary simulated theater experience that mimicked a “realistic” interpretation of the then theoretical concept of a journey to the moon. The attraction, which was renamed Flight to the Moon in 1967, proved popular enough with Disneyland guests to be cloned for Walt Disney World’s Magic Kingdom, opening two months after the park in December 1971.

By 1975, the public was still fascinated by space, but the happy-go-lucky nationalism of the space race was replaced by something a bit darker and more sci-fi. This new version of space crept into Disney’s parks in two major ways. The first saw both versions of Flight to the Moon rechristened Mission to Mars – arguably a few years too late, since landing on the moon had moved from “tomorrow” to “today” with the successful landing of the Apollo 11 mission in 1969 – and given a bit of a sci-fi story upgrade. The second, and literally larger, way this was implemented in Disney parks came with the opening of Space Mountain.

Loosely based on a Spaceport concept Walt and his Imagineers had kicked around in the 1960s, Space Mountain (opened 1975 in the Magic Kingdom and 1977 in Disneyland) abandoned the “realistic” and somewhat staid approach of Flight to the Moon/Mission to Mars, replacing it with a roller coaster thrill ride through a pitch-black show-building, with queue and ride vehicle aesthetics more reminiscent of 2001: A Space Odyssey than Walt’s 1950s cartoons.

Space Mountain has gone on to become the most famous Disney attraction in the world, having been duplicated in Tokyo, Hong Kong, and even in a Jules Verne-influenced incarnation in Disneyland Paris, each of which remains popular.

The 1980s saw Disney introduce two more beloved attractions heavy on space themes: the first, Epcot’s Horizons – the park’s “thesis statement” attraction, meant to show how humanity could improve itself in the 21st century – involved the space colony Brava Centauri as one of its future environments. 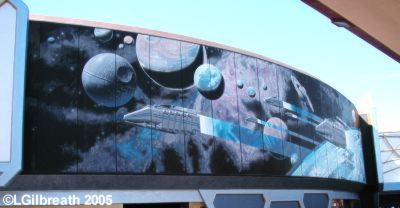 The second was Star Tours, a Star Wars-based simulator ride that opened at Disneyland in 1987, in Tokyo and Orlando by the end of the decade, and was an opening day attraction at Disneyland Paris in 1992. Star Tours would not only prove to be massively popular, it would lead to a sea-change in the way Disney’s theme parks operated — but we’ll get to that.

The next major space-based attraction Disney imagineering created proved to be one if its most controversial. In the late 1990s, the aforementioned Horizons was closed. In its place, Disney built an attraction that attempted to meld the thrills of space mountain with the “realistic” science behind Mission to Mars.

The result was Mission: Space, an E-Ticket attraction that used a spinning centrifuge simulator to closely mimic the gravitational force experienced by astronauts during liftoff and spaceflight. However, the attraction, which was already disliked by classic Epcot fans who missed Horizons, was met with a torrent of bad publicity due to sick passengers and unfortunately two rider deaths in its opening years.

While there have been no further fatalities, and a less intense option known as Green Mission has made the attraction more accessible to riders prone to motion sickness, Mission: Space has never become the park-defining E-Ticket Disney was hoping for. Despite this, in early 2019 Disney announced that they would be expanding the Mission: Space pavilion to include a restaurant known as Space 220.

The table service eatery will be themed to a space station orbiting 220 miles above the Earth. Visitors will take a simulated “space elevator” to the station and be free to indulge in “spacified” food and drink, all while looking through large picture windows that mimic outer space views.

While Space 220 is an exception, the vernal future of space-based attractions at Disney theme parks seems to be full lands built around the utilization of intellectual properties, building upon the style of immersion in a property pioneered with Star Tours in the 1980s. The first major, space-based IP to debut was Pandora – The World of Avatar at Disney’s Animal Kingdom.

The land, which opened in 2017, utilizes innovative construction techniques, authentic to the film detail work, themed foods and souvenirs, and bioluminescent paints to make visitors feel like they’ve truly left Orlando and been transported to Pandora. 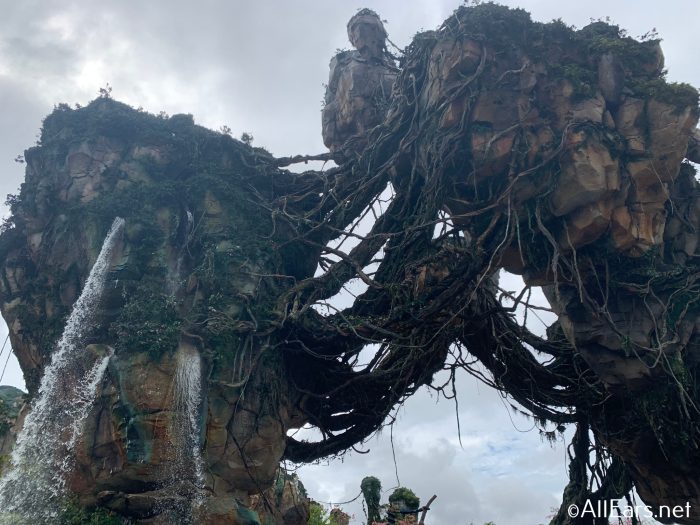 The land’s two attractions, Na’vi River Journey and the acclaimed Avatar Flight of Passage further allow visitors to explore the planet, cementing the illusion that the entire 12 acre land is located on a planet far from Earth.

Pandora proved to be the test model concept for Disney’s next space-based land: Star Wars Galaxy’s Edge. The huge lands, one in Disneyland and the other at Walt Disney World’s Hollywood Studios, are set entirely at the Black Spire Outpost on the planet Batuu. What sets the land apart from Pandora is that Batuu was created by Imagineers exclusively for Galaxy’s Edge, meaning that the planet is a completely original outer rim space environment.

Everything inside Galaxy’s Edge, from the lightsabers to the Ronto Wraps to the two major attractions – Rise of the Resistance and Millennium Falcon: Smuggler’s Run – further the immersive illusion of guests traveling through space and visiting another planet.

Simulated space travel has been a part of Disney theme parks since their inception in 1955 thanks to the intrinsic allure that traveling to and through the stars has for those of us on Earth, and if Galaxy’s Edge is any indication, there will be even more faux-space-faring attractions in the future.