Many of the amazing rides, shows, and attractions at the Disney Parks originated in popular Disney films, from early works like Snow White to more recent ones like Frozen. But there are also some Disney-made films that took inspiration from already existing Disney attractions. 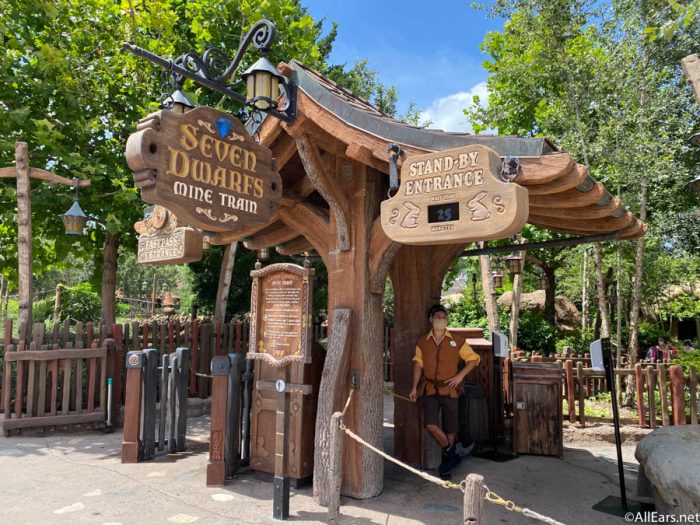 1. Pirates of the Caribbean

When you hear the words “Pirates of the Caribbean”, there’s a fair chance the first thing you’ll think of is the popular Pirates series of movies, starring the infamously clever and fun Captain Jack Sparrow among other pirates. But actually, the movies took their inspiration from the Pirates of the Caribbean boat ride in the Disney Parks. The ride takes you into dark pirate caves and through a bustling (and burning) town being raided by merry, singing pirates. Interestingly, before ‘small world’ gave Imagineers the idea for a pirate-themed boat ride, Pirates was going to be just a walk-through attraction. We’re glad they went a more watery direction (and inspired the creation of Jack Sparrow).

The first Pirates of the Caribbean film, Curse of the Black Pearl, contains numerous references to the original attraction. Classic parts of the ride reappear in the live-action movie, such as the prisoners desperately trying to lure over a dog with a key to free them. The chaotic pirate hub of Tortuga especially reflects the zany, wild atmosphere of the ride’s second half, showcasing ride scenes such as drunken pirates, crazy pistol shooting, and the wastrel wallowing with the pigs. In fact, the drunk man with the pigs turns out to be Joshamee Gibbs, a fun side character who would go on to appear in all the movies. In addition, young heroine Elizabeth Swann sings a haunting rendition of “Yo Ho – A Pirate’s Life For Me” in the opening scene.

While later movies had far fewer references to the ride, the movies in turn began to influence the ride. Captain Jack Sparrow now regularly appears throughout the ride, and different pirates raiding and carousing in the city will make references to Jack. He even appears at the end of the ride, celebrating in a room filled to the brim with treasure. Plus, in the past, the Pirates ride sometimes included callbacks to the movies in the spooky opening part of the ride, from seductive and deadly mermaids in the water to ghostly visages of villains such as Davy Jones and Blackbeard. Both the ride and movies are lots of fun, so be sure to experience them firsthand at the parks and on the big screen.

There are plenty of different kinds of fun attractions at the Disney Parks, and not all of them are rides. Country Bear Jamboree, for instance, consists of animatronic bears playing various country music tunes in a cozy theater. The show is a lot of fun, especially the wise-talking animal heads on the wall. It was one of the last attractions Walt Disney worked on, and it remains charming to this day. The show was even popular enough to lead to extra seasonal versions called The Country Bear Christmas Special and The Country Bear Vacation Hoedown. Sadly, both of these fun seasonal versions now longer play, though many fans wish for their return. But who could have guessed the bears would even get a movie?

The Country Bears, a live-action movie, admittedly has little to do with the actual set-up of the original show. Some of the characters from the jamboree have counterparts in the film, most notably some of the musicians in the show’s “Five Bear Rugs” jug band: Zeb, Ted, Fred, and Tennessee. Guitar-playing Big Al and sweet singer Trixie also appear in the movie. However, rather than being part of a music variety show, they were a country rock band that disbanded. The plot revolves around an original character – a bear adopted by a human family – helping the band get back together. The film received poor reviews, but it still demonstrates the ongoing popularity of a simple but fun jamboree with country bears.

Interestingly, the Jungle Cruise actually took inspiration from classic jungle adventure movies from the 20th century, such as the 1951 film The African Queen. The boats, for instance, were styled after the steamships in that movie. The ride also took inspiration from The African Lion, part of Disney’s True-Life Adventures nature documentaries. Moreover, the ride was originally intended to be a safari-style adventure into the untamed jungles, following in the footsteps of adventure movies. But over time, Disney Imagineers shifted the ride away from a serious approach to a more comical and enjoyable romp, with vivid animatronic scenes like gorillas trashing a camp and a safari party getting the “point” in the end from a rhino.

But while the Jungle Cruise ride is now largely comedic, the Jungle Cruise movie, set to release in 2021, seems to harken back to the original focus on an exciting jungle adventure. From what we know right now, the plot involves a riverboat captain searching for a mythical tree in the heart of the jungle, while facing off against fierce wildlife and rival explorers. The preview showcases exciting and harrowing action sequences, while leaving out much of the usual skipper jokes found on the ride. While the jokes have been an essential part of the ever-popular ride, the adventure movies that first inspired the ride were quite popular back in the day. So we’ll have to wait and see if this new Jungle Cruise movie proves to be a worthy action movie in its own right.

Many Disney rides actually have elaborate backstories intertwined with their adventures, which have sometimes influenced the plot of movies inspired by them. The Haunted Mansion ride features many different ghosts – 999 happy haunts, in fact – but there are some phantoms who stand out. For examples, there’s the unsettling “Ghost Host” who welcomes you in, the magical Madame Leota who casts a spell to make the ghosts visible, and the heartbroken and/or serial murderer “Bride” in the attic. Disneyland Paris’s version, the Phantom Manor, has the most elaborate storyline by far. It features both a dark curse and a tragic love story. Perhaps this tale in particular helped influence the Haunted Mansion movie in 2003.

Like with the Phantom Manor’s backstory, the Haunted Mansion film’s spooks stem from a curse and a dark love story, though the exact details differ. The ghostly cast are based on the key characters in the Haunted Mansion ride. Madame Leota, for instance, provides the protagonists with important clues on the secrets to the mansion. Similarly, the late owner of the mansion, Master Gracey, is at least partially based on the Ghost Host. The movie offered a mix of horror and comedy, a fitting combination given how both elements are present in the ride. While the movie received poor reviews upon release, it added new lore to the Mansion and even influenced a set of 2005 comics about the haunted house’s history.

While the movies covered so far were inspired by specific rides and attractions in the Parks, one movie draws inspiration from an entire themed land: Tomorrowland, a sci-fi-themed area found at multiple Disney Parks around the world. Inspired by Walt Disney’s passion and optimism for scientific progress, the concept of Tomorrowland embodied his ideal for a futuristic utopia. As the future ever changes with new advances, the concept of Tomorrowland has been revised multiple times by Disney. The changing perspective of the future also reflects the central tone of the movie Tomorrowland, since it utilizes more dystopian concepts of sci-fi that have become prevalent in science fiction works.

The movie makes multiple callbacks to Tomorrowland and its various attractions. For instance, the film starts out at the 1964 World’s Fair, where Disney hosted multiple attractions; during the opening scene, you can hear the theme of Carousel of Progress, which eventually made its way to Tomorrowland. The people-like “animatronic” robots take their name from the life-like animatronics used on numerous Disney rides. Moreover, the movie’s otherworldly “Tomorrowland” city reflects conceptual art for Tomorrowland at the parks, as well as Walt Disney’s scrapped vision for a utopian Experimental Prototype Community of Tomorrow (which would later become EPCOT).

The Tower of Terror, a terrifying adventure in a creepy hotel’s plummeting elevator, took its name and inspiration from the Twilight Zone, a dark and unsettling TV series with lots of startling twists in each standalone episode. Disney’s overall set-up of the abandoned, haunted hotel is original, though, and doesn’t rely on any specific Twilight Zone episodes. So it makes sense that the movie inspired by the Tower of Terror focuses entirely on the hotel rather than any connection to the Twilight Zone.

Tower of Terror was actually the first Disney movie to be based off a Park attraction. It originally appeared on television as part of The Wonderful World of Disney in 1997. Some of the movie’s footage was actually filmed inside the Disney World version of the ride. The plot involves a journalist investigating a cursed and haunted hotel in Hollywood. It even culminates with the cast being trapped inside a falling elevator. So if you plan to enter the Tower of Terror, be sure to check out the movie; you might be able to spot some of the scene locations during your adventure.

Though it’s no longer an available attraction at the Disney Parks, Mission to Mars has left behind a great legacy, with both another attraction and a movie taking inspiration from it. Mission to Mars first opened in Disneyland as the ride Rocket to the Moon. The simulation had you travel on a spaceship up to the moon and, later, to Mars after the renaming. It was a fun and exciting experience, but it gradually became outdated, so it closed in Disneyland in 1992 and in Disney World the following year. But EPCOTe’s Mission: SPACE attraction – an intense and realistic simulation of spaceflight – drew on the same concept and can be considered a sort of spiritual successor.

The Disney-produced sci-fi thriller Mission to Mars also seems to take inspiration from the original Mission to Mars attraction. In it, a team of astronauts traveling to Mars gets caught in a mysterious accident and has to fight for survival on the planet. The movie’s visuals in particular were praised by critics as amazing. The spectacular scenery highlighted the wondrous beauty and danger found in space travel. That said, reviews of the film overall were negative, especially with a bizarre twist at the end (aliens). Space remains the final frontier, and the continuing legacy of Mission to Mars demonstrates how adventures into space continue to capture the imagination.

The many movies based on Disney attractions highlight the incredible appeal of the Disney Parks. Even if the success of these movies has varied, many of the attractions that inspired them have stayed popular to this day.

What Disney attractions would you like to see a movie based off them? Please share your thoughts in the comments below.

Love Disney history? Check out the links below for more!