For a great many Disney fans, DisneySea is a magic word. The Tokyo resort’s second gate is widely considered by many to be not only the greatest Disney park in the world but the greatest theme park in the world period. Unfortunately thanks to the expense and logistics of international travel, a trip to Tokyo is out of reach for many. However, there was a point in time where a visit to DisneySea wouldn’t require a flight to Japan. In fact, had things gone according to plan, it would have required nothing more than a half hour drive from Disneyland to Port Disney.

As we’ve spoken about before, the early 1990s was a time of incredible optimism at the Walt Disney Company. Buoyed by the success of the company’s theme parks and films at the end of the previous decade, CEO Michael Eisner announced the ambitious Disney Decade. This plan featured a large number of attractions, parks, and other goals the company was expecting to complete by the year 2000. One of the key components of the Disney Decade was to build a second gate theme park in Southern California to complement the original Disneyland in Anaheim. In the early 1990s, two second gate plans were floated to the public: WestCOT in Anaheim (which you can read about here) and the Port Disney complex in Long Beach.

Taking several queues from Walt Disney World, Port Disney was planned to be a massive vacation destination complex located on the shores of Queensway Bay near the Port of Long Beach on land that Disney had acquired as part of their purchase of the Wrather Corporation.

According to plans released publicly in 1990 and 1991, Port Disney would have consisted of five hotels: the Shoreline Hotel, which would feature a full retail/entertainment center; the Tidelands Hotel; the Marina Hotel; the Canal Hotel (in later plans split into two hotels); and the Port Hotel which would have featured a combined 3,900 hotel rooms. The area would also feature park land, 400 marina slips, a ferry landing, and full-size international cruise ship terminal. However, while these amenities would have undoubtedly been impressive, the crown jewel of Port Disney was supposed to be its theme park. 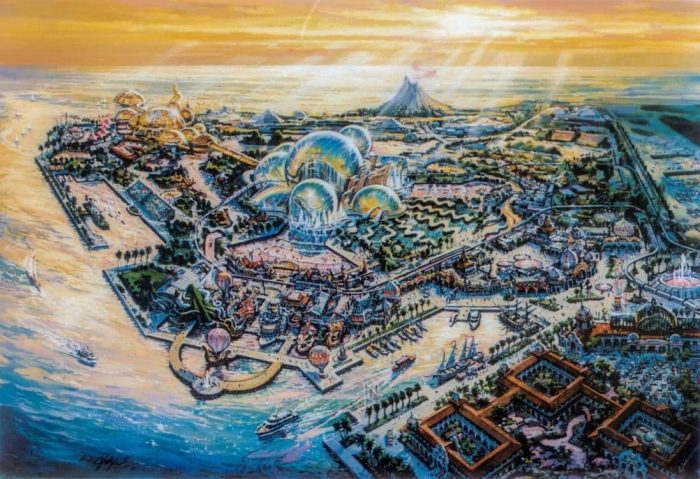 DisneySea as announced in 1990 was vastly different than any other Disney park that existed at the time. The park’s centerpiece was planned to be Oceana, a complex of glass “bubbles” featuring a large aquarium and other exhibits. Oceana was also scheduled to feature a “Future Research Center.”

This research center was described in the promotional pamphlet Port Disney News as a place where “Guests will be able to visit the heart of this functioning sea laboratory, observing scientists at work. Watching these experts, visitors can glimpse the future of man’s involvement with the seas and probe deeper into man’s relationship with the environment. For the more light-hearted adventurers, the Center will include a simulator adventure that will give guests a glimpse of the drama — and danger — faced by real explorers of the deep.”

Beyond Oceana, the park was planned to include numerous themed lands including:

-Mysterious Island: This would feature a recreation of Atlantis with a suspended thrill ride entitled Nemo’s Lava Cruiser, as well as other steam-punk and Jules Verne-inspired aesthetics.
-A Turn of the Century Boardwalk: This area would have featured amusement rides in homage to Long beach’s well known previous amusement park, The Pike. 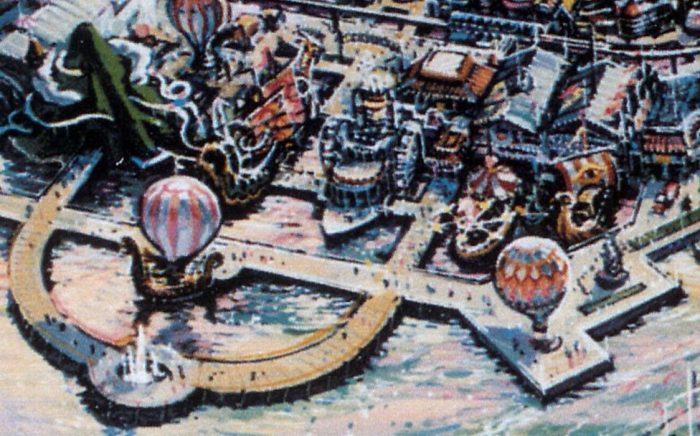 -Fleets of Fantasy: This was envisioned as a harbor area filled with replicas of sailing ships that would serve as show structures for attractions, restaurants, and more.
-Heroes′ Harbor: This was to be an area themed to mythological adventurers, with attractions themed to Sinbad, Odysseus, and other Greco-Roman heroes.
-Venture Reefs: This would have been an area featuring recreations of a Grecian village, a Caribbean lagoon, and an Asian market featuring artificial tropical reefs and a shark cage dive experience. 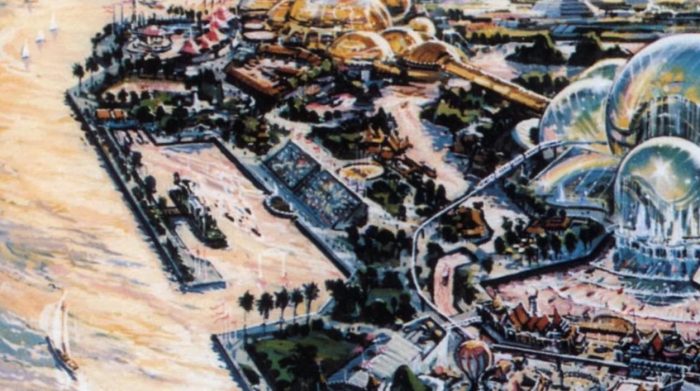 The park also would have included the famed ocean liner the Queen Mary in its design, as the company came into ownership of the ship when they purchased Wrather.

It’s important to note that, like any theme park in the blue sky stage, plans for DisneySea were constantly evolving. As explained in the aforementioned Port Disney News in September 1991, “While plans for DisneySea are still evolving, Walt Disney Imagineering is planning attractions for visitors to enjoy the spirit of the sea with fun as the common denominator.”

While the company continued to publicly tout the evolving Port Disney concept in late 1991, behind the scenes the concept was falling apart. The company was facing opposition from many long beach residents who didn’t want a themed entertainment resort in their community and from local politicians who scoffed at the public funds the company was requesting for freeway and infrastructure improvements around the proposed resort. In November of 1991, the mayor of Long Beach laid out things succinctly when he said the idea just didn’t make “as much economic sense for Disney or the city now.” By the end of 1991, Port Disney and DisneySea were cancelled in favor of pursuing WestCOT in Anaheim.

While Port Disney was never built in California, elements of the proposed complex can be found in other Disney properties built over the years since. Most obviously, the idea of DisneySea was adapted into the Tokyo DisneySea theme park. While the Japanese park isn’t a direct clone of the plan, it features areas similar to the planned Mysterious Island (same name), Heroes’ Harbor (areas of the Arabian Coast), Venture Reefs (areas of Lost River Delta), and Fleets of Fantasy (Mediterranean Harbor). Tokyo DisneySea also features the S.S. Columbia, a faux sailing ship in the American Waterfront area that saved the same role the real Queen Mary would have. 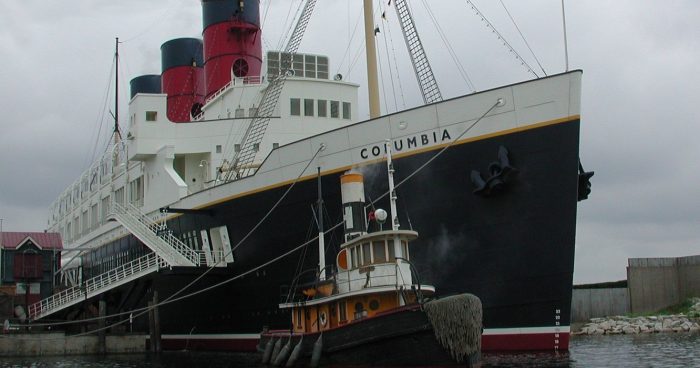 In addition, the Boardwalk area would eventually morph into Paradise Pier, a key land in Disney’s California Adventure (the park that would eventually be built in Anaheim, replacing WestCOT).

It’s not stretch to say that had Port Disney and the original version of DisneySea been built in Long Beach, the history of the Walt Disney Company and its theme parks would be incredibly different. 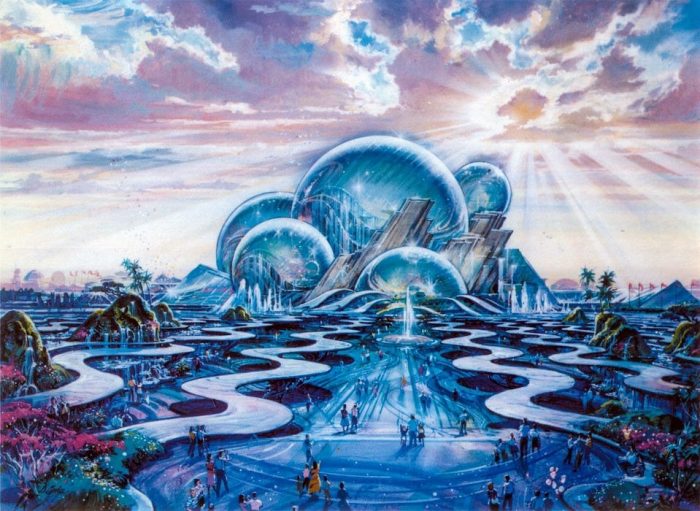 Do you wish Port Disney had been built, or do you think things worked out for the best? Let us know in the comments below.

Turn the pages of Disney history at the links below!