Over the past several years, Disney has increasingly prioritized inclusion within all aspects of the company.

For example, in 2020 Disney added Inclusion as a fifth “key” (or company value) for Cast Member training and then went on to update Cast Member costume guidelines to be more inclusive. They’ve also worked to create more opportunities for diverse groups within the company and launched a website dedicated to the steps Disney is taking to make sure that representation is achieved in 2021. But, recently, The Walt Disney Company has received criticism for its donations to Florida politicians supporting the “Don’t Say Gay” Bill and now the company has issued a response.

UPDATE: Disney CEO Bob Chapek has sent a memo to employees explaining Disney’s response to the “Don’t Say Gay” bill. You can read more about that memo here.

According to a tweet shared by Good Morning America today, Disney has responded to recent protests and calls to action regarding the “Don’t Say Gay” Bill with the following statement:

“We understand how important this issue is to our LGBTQ+ employees and many others. For nearly a century, Disney has been a unifying force that brings people together. We are determined that it remains a place where everyone is treated with dignity and respect. The biggest impact we can have in creating a more inclusive world is through the inspiring content we produce, the welcoming culture we create here and the diverse community organizations we support, including those representing the LGBTQ+ community.”

If you’re not familiar with the bill, it proposes a variety of rules and regulations on when and how teachers and staff at public schools can discuss gender and sexual orientation. For example, the legislation would not allow “classroom discussion about sexual orientation or gender identity” between kindergarten and third grade “or in a manner that is not age-appropriate or developmentally appropriate for students in accordance with state standards.”

Additionally, the bill would require that school districts “notify parents of healthcare services” provided to their child and mandate that parents be notified “if there is a change in the student’s services or monitoring related to the student’s mental, emotional, or physical health or well-being and the school’s ability to provide a safe and supportive learning environment for the student.”

If schools were to withhold this information, the parents would be able to “bring action against [the] school district.”

While the bill has not become law in Florida just yet, it did recently pass in Florida’s House of Representatives on February 24th. UPDATE: This bill has also passed in the Florida Senate with a 22-17 vote. It will go to Governor Ron DeSantis next. This led critics to look into which companies provide donations to the politicians who support the bill — of which Disney is one.

In fact, The Orlando Sentinel reports in a commentary piece that The Walt Disney Company has provided donations “to every single sponsor and co-sponsor” including Florida State Senator Dennis Baxley.

Immediately following the bill passing in the House of Representatives, former Disney CEO Bob Iger tweeted in response to President Biden (who opposes the bill) saying that he is “with the President on this! If passed, this bill will put vulnerable, young LGBTQ people in jeopardy.”

The Walt Disney Company, however, did not issue a response at this time.

I'm with the President on this! If passed, this bill will put vulnerable, young LGBTQ people in jeopardy. https://t.co/fJZBzre4yM

Yesterday, a relative of Walt Disney, Abigail Disney, tweeted “Not saying anything is saying a lot. ⁦@WaltDisneyCo get a spine” and, according to Click Orlando, two protests were held by the AIDS Healthcare Foundation at the entrance to both Disney World and Disneyland.

It’s pretty fundamental. As Einstein said, you can’t stand still on a moving train. When laws are being passed that are this hateful and dripping with prejudice, there is no neutrality. Not saying anything is saying a lot. ⁦@WaltDisneyCo⁩ get a spine https://t.co/amek38qsAC

Additionally, the AIDS Healthcare Foundation released an ad in the Orlando area directly asking Disney to comment on the matter.

In discussing why Chapek may not have immediately issued a statement, Disney’s Chief Corporate Affairs Officer Geoff Morrell responded to The Hollywood Reporter saying:

“Whatever Bob’s personal politics are, he’s not an activist and does not bring any partisan agenda to work. He sees himself first and foremost as the custodian of a unifying brand that for nearly a century has been bringing people together, and he is determined that Disney remain a place where everyone is treated with dignity and respect.” 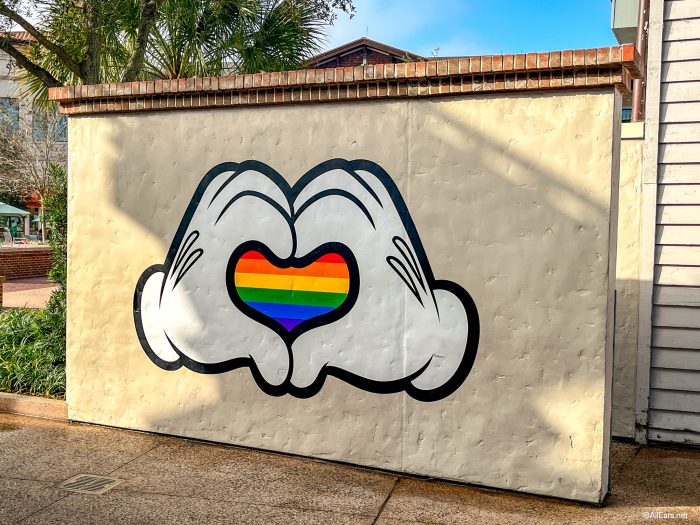 The Hollywood Reporter does note, however, that Disney staff received a message from Disney’s Chief Diversity Officer Latondra Newton on March 2nd, sharing that Chapek had requested “to meet with leaders in our company’s LGBTQ+ community to discuss how Disney can best support these important and valued employees and cast members.” She also shared details about an upcoming “Reimagine Tomorrow” conversation that would discuss “issues of concern to our LGBTQ+ colleagues.”

UPDATE: Disney CEO Bob Chapek has since sent out a company-wide memo to employees and shared a statement in the annual shareholders meeting addressing the controversy over the “Don’t Say Gay” bill. He explained why Disney has not commented on the issue publicly and pledged that Disney would donate $5 million to the Human Rights Campaign (HRC) and other LGBTQ+ organizations. You can read more about that memo here. Following Chapek’s statement, the HRC announced that they would refuse the donation until “meaningful action” was taken by the company. Read the full statement here.

UPDATE: After Bob Chapek’s memo to Disney employees went live, a response letter was released by “The LGBTQIA+ employees of Pixar, and their allies.” The letter condemned Disney’s response to the controversial bill and accused the company of “capitalizing on Pride” with merchandise like The Rainbow Mickey Collection. The letter also claimed that Disney has removed moments of “overtly gay affection” from Pixar films in the past before their release. After this letter was released, Chapek released a letter apologizing for his response to the bill.

The Pixar company also recently released a statement on Instagram showing their support for the LGBTQIA+ community.

This statement reads, “All of us at Pixar stand with our LGBTQIA+ colleagues, friends, families, and fans around the world who are targeted by laws that marginalize and diminish their identities and lives. We value authenticity, inclusion, and community, and we denounce the discriminatory bills advancing in states across the country that are harmful to all of us. Everyone deserves love, dignity, respect, and safety.”

In addition, Marvel Studios has released a statement on Twitter denouncing “any and ALL legislation that infringes on the basic human rights of the LGBTQIA+ community.”

UPDATE: As the controversy surrounding Disney’s response has continued, California Governor Gavin Newsom tweeted that “the door is open” to bring jobs back to California. This is in reference to the Walt Disney Company’s decision last year to begin moving many jobs from California to Lake Nona in Florida.

Disney, the door is open to bring those jobs back to California – the state that actually represents the values of your workers. https://t.co/kbCi7Zgs90

In light of Disney’s response to the “Don’t Say Gay” bill, some Walt Disney Company employees have organized walkouts to demand further action by the company against similar bills in other states. Other demands of these employees include stronger advocacy by Disney for the LGBTQIA+ community and Disney to give no further donations to certain politicians who supported the “Don’t Say Gay” bill in Florida. The walkouts are scheduled during Cast Members’ 15-minute breaks every day until March 21st, and there is a “full-scale walkout” planned for March 22nd.

UPDATE: The Los Angeles Times shares that other members of the Disney family have since spoken up about the “Don’t Say Gay” bill (now law). Specifically, Roy P. Disney, who is the grandson of Roy O. Disney (and great-nephew to Walt Disney), his wife Sheri, and their two kids, have announced that they will match up to $500,000 in donations to the Human Rights Campaign.

Initially, one of Roy P. Disney’s children, Charlee, had announced a “$250,000 matching grant to HRC.” Sheri Disney said that the family then decided to double that amount.

Charlee is a 30 year-old high school teacher (biology and environmental science) who had a sort-of “public coming-out” at the HRC gala. Charlee is transgender.

In a Zoom call with the LA Times, Charlee said “I feel like I don’t do very much to help…I don’t call senators or take action. I felt like I could be doing more.”

In a statement, Roy P. Disney said, “Equality matters deeply to us…especially because our child, Charlee, is transgender and a proud member of the LGBTQ+ community.”

The LA Times shares that Sheri said that the family had been “disappointed” by the Disney Company’s “initial refusal to take a stand against the Florida law but had no doubt the company would make it right.”

Disney’s website does affirm the company’s support for “freedom of identity and expression” and they have supported “Human Rights Campaign, GLAAD, GLSEN, Trevor Project and Outfest” (all of which are LGBTQ+ organizations) in the past.

When it comes to the Disney Parks, they have historically celebrated Pride Month annually in June and Gay Days (and unofficial fan event) are already scheduled in Disney World for June 2nd through 6th, 2022.

The “Don’t Say Gay” bill has been sent to the desk of Governor Ron DeSantis for his signature. Of course, this is a developing story, so be sure to stay tuned to AllEars for any additional updates from Disney.