“A vista into a world of wondrous ideas, signifying Man’s achievements…A step into the future, with predictions of constructed things to come. Tomorrow offers new frontiers in science, adventure and ideals.” 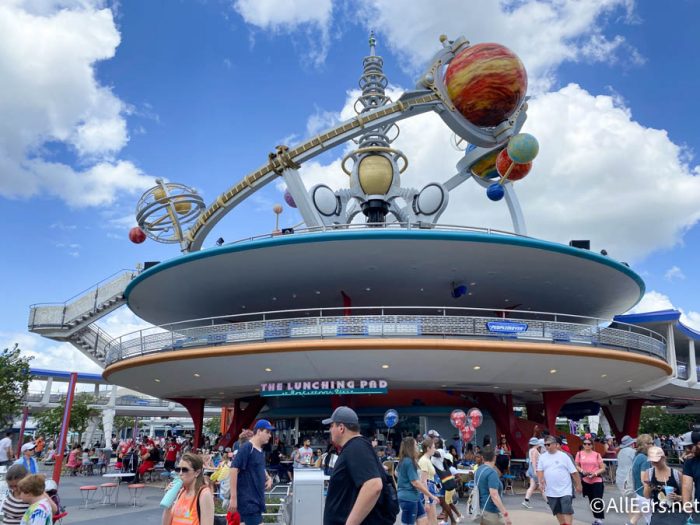 With these opening words, Walt Disney began the dedication of Tomorrowland on Disneyland’s opening day in 1955. In the 65+ years, Tomorrowland has become one of the most famous theme park concepts Disney Imagineers have ever created, with versions at every Disney resort around the world. However, even with that acclaim, Tomorrowland has also been one of Disney’s most controversial lands, as inherent issues with the very concept have led to scrapped overhauls and stagnation.

Come along with us as we look at the history of Tomorrowlands around the world, and delve into the “Tomorrowland Problem” that has vexed Imagineers for decades.

Like the other original Disneyland lands, Tomorrowland has its roots in the culture of the early 1950s. Namely, the cultural fasciation with the then nascent “space race” between the United States and the Soviet Union. The “space race” in-turn found its way into the popular culture of the time, influencing science fiction, film, and television — including the highly successful “Man in Space” episode of Walt Disney’s Disneyland television series. However, opening day Disneyland visitors expected a sci-fi wonderland like they’d seen on television.

Despite Walt’s somewhat grandiose dedication speech, Tomorrowland was plagued by budget cuts and a short construction timeline during the building of the park. By opening day, Tomorrowland was in an (to put it nicely) incomplete state. Though it did feature the popular Rocket to the Moon and Autopia attractions, the land mainly consisted of corporate showcase attractions that essentially served as showrooms for companies including Monsanto (who would also build their plastic House of the Future in the land in 1957), American Motors, Richfield Oil, and Dutch Boy Paint.

Reaction to Tomorrowland was somewhat negative, especially compared to the rest of the park. Many guests saw it as little more than a corporate showcase. Perhaps due to said reaction, the land became the first in Disneyland’s history to be massively plussed up. In fact, the land was the center of Disneyland’s “second grand reopening” in 1959, when the Matterhorn Bobsleds, Disneyland Monorail, and Submarine Voyage all debuted in the land. (The Matterhorn was later shifted to Fantasyland).

Despite the additions of Disneyland’s first E-Tickets providing a boost to the land’s reputation, by the mid-60s, Tomorrowland’s corporate park aesthetic had become dated. This is the first, but nowhere near the last, instance of Imagineers being forced the deal with the “Tomorrowland Problem.” The issue being that any land that’s meant to represent a literal vision of the future starts becoming dated the minute it opens.

In response to the “Tomorrowland Problem”, Imagineering completely reimagined Tomorrowland in 1967. That year, the land — outside of the 1959 additions, Flight to the Moon, and Autopia — was leveled and completely rebuilt. This reimagined Tomorrowland embraced a “world on the move” theme which featured nonstop kinetic energy moving own multiple levels throughout the land. In additions, new attractions including the Carousel of Progress (from the 1964 World’s Fair), Adventure Thru Inner Space, Astro Jets, a new Circle-Vision auditorium, and the PeopleMover were added. The new Tomorrowland was a massive success, and a similar counterpart opened with Walt Disney World’s Magic Kingdom in 1971.

Both Disneyland and Walt Disney World’s Tomorowlands continued to expand throughout the 1970s, with the former adding America Sings in 1974 to replace the Carosuel of Progress, which was moved to the latter park in 1975. The biggest expansion, and arguably most important, expansion in Tomorrowland’s history came in the mid-70s, when a long dormant project known as the “space port” was retooled into arguably Disney’s most famous attraction: Space Mountain.

The indoor coaster-style ride first opened at Walt Disney World’s Magic Kingdom in 1975 to great fanfare. The acclaimed attraction was the first thrill ride in the park, and forever changed how Imagineering designed attractions and who they designed them for. A similar, but not identical, Disneyland version opened in 1977 due to constriction delays, but went on to become iconic in it’s own right as well. In 1982, a version of Tomorrowland similar to the Magic Kingdom opened with Tokyo Disneyland.

Despite the additions in the 1970s (as well as the massively popular 1980s additions of Star Tours and Captain EO Starring Michael Jackson to Disneyland’s Tomorrowland), all three versions of Tomorrowland began showing their age again in the late 1980s (there’s that dreaded “Tomorrowland Problem” again) which led Imagineering to rethink their entire approach to the land for the then-upcoming French Disney park.

When EuroDisney (Disneyland Paris, as it was called upon its grand opening) debuted in 1992, it didn’t feature a Tomorrowland. Instead, the park had Discoveryland. Inspired by the work of writers like Jules Verne and H.G. Wells, the land cast many of Tomorrowland’s typical attractions in a steampunk style (partially based on the legendary unbuilt Disneyland land Discovery Bay) meant to represent the future “as imagined by history’s greatest writers.”

Though it opened three years after the park, the land’s centerpiece was Space Mountain: De la Terre à la Lune. This heavily themed, technologically advanced version of the coaster was based on Jules Verne’s From the Earth to the Moon and proved to be one of the best attractions Imagineering ever built… before it was completely transformed a decade into its lifespan, but that’s another story.

While Discoveyland was breathing new life into the Tomorrowland concept, Imagineering was planning massive refurbishments for both the US versions of the parks. Disneyland’s was to be transformed into Tomorrowland 2055, a bustling “spaceport” where aliens would visit Earth. Meanwhile, Walt Disney World’s version of the land was to be inspired by Buck Rodgers-style science fiction films. Both versions of the land were meant to be headlined by the ExtraTERRORestial Alien Encounter.

However, ironically given the success of Discoveryland in reinvigorating what a Tomorrowland could be, the initial financial failure of EuroDisney crippled both projects. Disneyland’s Tomorrowland was given little more than a bronze paint job and the failed Rocket Rods attraction. The Walt Disney World version did receive a limited placemaking project, and the ExtraTERRORestial Alien Encounter…which would close less than a decade later, thanks in part to it being the scariest Disney attraction of all time.

Since the late 1990s, both Disneyland and Walt Disney World’s Tomorrowland’s have stagnated. While each has seen some turnover in attractions, their greater theme and aesthetic design has continued to date itself, furthering the “Tomorrowland Problem” into the new millennium. While numerous plans to redevelop on or both of the U.S. Tomrrowlands have been rumored — including everything from a Lucas or Marvel land, a re-theme based on the 2015 Tomorrowland film, and a a design based on Shanghai Disneyland’s lush, plant-centric version of the land to go along with the construction of a clone of Shangahai’s Tron coaster at the Magic Kingdom — none have come to fruition as of yet.

How would you like to see Disney address the “Tomorrowland Problem” in the U.S. parks? Should they attempt to make the lands accurately futuristic again, tap into fan nostalgia for the previous versions of the lands, or try something new entirely?