Whew! WandaVision on Disney+ has been such a ride since the first episode!

We’ve been busy organizing all our theories and studying every little detail and Easter Egg we can find. But episode 8 just answered a LOT of our questions (while raising a ton of new ones)!

Please note that the following contains spoilers for episode 8 of WandaVision, so enter only if you dare!

The mid-credits scene of episode 7 showed us that Agatha was behind Pietro  showing up at Wanda’s door. In Episode 8, Agatha refers to him as “Fake Pietro or Fietro,” answering the question about whether he’s really Wanda’s brother or not.

He’s not. But of course, that begs the question — who is he? Is he Quicksilver from another universe? Using Evan Peters, who portrayed Quicksilver in the X-Men films, in the role surely can’t be a red herring, can it?

Wanda Was a Witch All Along

As Agatha walks Wanda through her childhood, the two come upon a scene where young Wanda and Pietro are next to a bomb in war-torn Sokovia. The bomb, though, never went off. 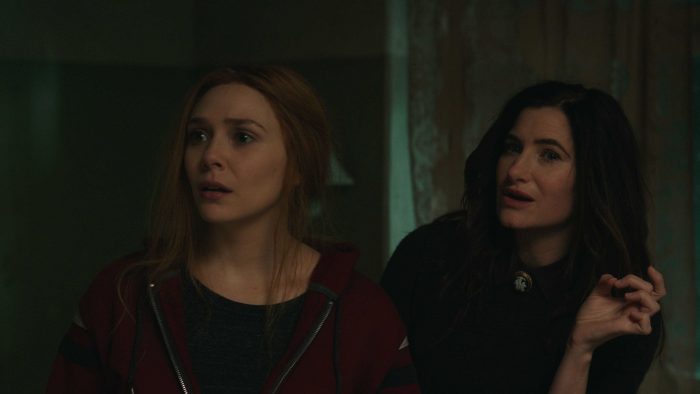 How DID you get your powers, Wanda? ©Disney/Marvel

Agatha points this out to Wanda and mentions that Wanda was always a witch, but that something else made her powers as strong as they are (and we learned in Age of Ultron that her powers were the result of experiments done on her with Loki’s Scepter, which held the Mind Infinity Stone).

Wanda Did NOT Steal Vision’s Body

Perhaps one of the real shockers of this episode is that we’ve spent all this time believing Hayward’s story (and footage) that told us that Wanda broke into S.W.O.R.D. headquarters and stole Vision’s body — except she didn’t. Hayward lied.

Instead, Wanda created an entirely new version of Vision within the Hex from her grief.

How and Why Wanda Created the Hex in Westview

After Wanda visits Vision’s body (and doesn’t steal it), she finds a map with a scribbled note inside a heart from Vision indicating a lot in Westview, New Jersey — presumably where Vision was building a house for her.

Wanda traveled to Westview to see the lot, and in her grief, her power manifested and spread out throughout the town, creating the Hex.

Perhaps the most pressing question about this series is why Wanda would choose to create a new life in classic sitcoms.

It turns out she often watched these comedies with her family as a child in Sokovia, which is also how she learned English.

Why is Wanda called “Scarlet Witch?”

We even get a clue as to why Wanda earns the name “Scarlet Witch.” While Agatha holds Wanda’s children hostage, she reveals that Wanda’s magic is “Chaos Magic” and her use of such magic makes her a Scarlet Witch.

We’re not entirely sure what that means, but we have a feeling there’s a longer explanation coming next week.

Agatha is Probably Not the Show’s Ultimate Villain

Although Agatha is pretty wicked — after, all, she is holding Wanda’s children hostage to get to the bottom of Wanda’s powers, it has now become pretty obvious that she’s not the real villain. She seems to just want to know how Wanda came into her powers. And the mid-credits scene of episode 8 revealed who the real villain is…we’ll get to that in a minute.

What Hppened to Vision’s Body?

The real kicker of this episode happens in the mid-credits scene. Haywood has kept Vision’s body and reassembled it, and at the end of this scene, he uses magic from the Hex to bring Vision back to life, as a weapon: White Vision.

In the comics, this version of Vision is emotionless and only follows commands. Haywood is the real villain here. But we can’t wait for the Vision vs. Vision showdown!

Of course, these answers only unveil a myriad of more questions, but we are looking forward to seeing how this all plays out.

What did you think of episode 8? Let us know in the comments!