It’s finally October (aka official spooky season) and there are a LOT of new treats to get in Disney World!

There’s a catch, however — these treats are only around for a limited time, so if you don’t want to miss out on something make sure you read on to see some of the new snacks we’ve tried so far this October!

We’re starting out with the Boo Brownie, a Mickey-shaped brownie topped with ganache and whipped cream ghosts from the BoardWalk Deli.

BOO 🎃 to you and this yummy (and rich!) Boo Brownie from the Boardwalk Deli at Disney’s Boardwalk Resort! pic.twitter.com/ZbIVFOd7e6

The Creepy Cupcake costs $5.79 and both treats are available from October 1st through October 31st.

The Boardwalk Deli is coming in STRONG this morning – check out the Creepy Cupcake 🎃🪦 available now! pic.twitter.com/ghZ38WkEc8

Let’s head over to the Beach Club Marketplace at Disney’s Beach Club Resort for two more treats, with the first one being the Mummy Cookies ‘n Scream Trifle, made with layers of chocolate cookies ‘n cream mousse, chocolate cake, and whipped cream.

Another spooooky treat you can get your hands on today is the Mummy Cookies ‘n Scream Trifle from the Beach Club Marketplace! It’s got layers of cookies ‘n cream mousse, chocolate cake, and whipped cream for $5.99! pic.twitter.com/3b6ihX903u

The second treat we tried was the (Not So) Poison Apple Trifle, made with layers of caramel crunch, apple mousse, caramel mousse, and vanilla cake with buttercream and fondant pieces.

Get this not-so-poisonous treat for $5.99. Both desserts are available from October 1st through October 31st.

But if chocolate isn’t your thing, maybe the (Not So) Poison Apple Trifle will be! 🍎 This one has layers of caramel crunch, apple mousse, caramel mousse, and vanilla cake topped with buttercream and fondant pieces! It’s $5.99 too! pic.twitter.com/lNuW0mXLok

The new Spellbound Chicken Adobo Nachos are up for grabs come lunch time over at Art of Animation too! pic.twitter.com/mhqimyLk5X

And don’t forget to grab the Whoopie Monster, made of spiced apple whoopie pie with marshmallow buttercream and caramel. So cute!

The Whoopie Monster costs $5.79, and both eats are available from October 1st through October 31st. Note that you can also get the My (Plant-Based) Boo from this location.

Look at that face! Find the Whoopie Monster at Art of Animation for $5.79! 💜 pic.twitter.com/DdEZDwD1r4

Next up is the Carmelized Apple Liege Waffle from Connections Cafe in EPCOT, made of caramelized white chocolate and graham cracker streusel.

The liege waffle at Connections Cafe has gotten another spin! This is the Caramelized Apple Liege Waffle! 🍎🧇 pic.twitter.com/TG4WDilVZJ

This treat is plant-based and gluten/wheat-friendly for $5.29.

I spy with my little eye, another plant-based treat in Disney World! ✨ This is the My (Plant-Based) Boo cupcake! It’s a chocolate cupcake with vanilla buttercream and sprinkles 🍃 pic.twitter.com/5c3QdlDGDM

And also located at the same resort restaurants, the Mickey Pumpkin Cheesecake consists of pumpkin cheesecake and spiced chocolate cake with buttercream and chocolate décor.

It costs $5.79 and both treats are available from October 1st through October 31st.

When is a cheesecake too pretty to eat? Maybe when it looks like this! You can find this Mickey Pumpkin Cheesecake at Disney’s All-Star Resorts! 🎃 pic.twitter.com/6kBKUI0AXM

Looking for more spooky treats around Disney World? Head to Beaches and Cream Soda Shop for an EPIC Halloween milkshake!

ALL the Halloween snacks in Disney World this October! 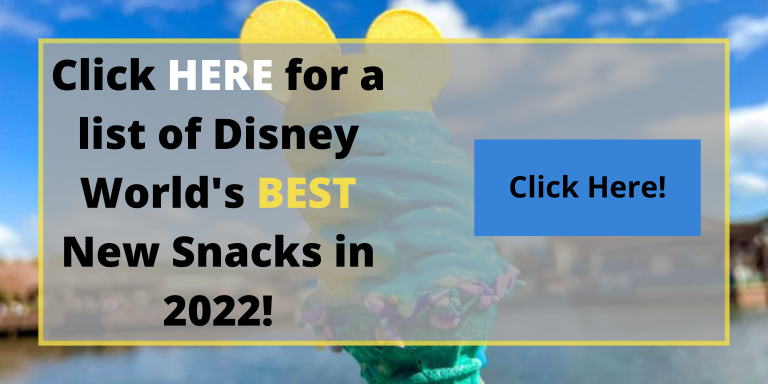 Have you tried any Halloween treats in Disney World? Tell us in the comments!