For millions of guests over the (almost!) last five decades, the most memorable part of their Walt Disney World vacation is their arrival at Magic Kingdom. There is something undoubtedly magical about seeing Cinderella Castle rising above Main Street for the first time, whether you’re looking through a monorail window or tipping your head over the side of a watercraft on Seven Seas Lagoon.

These special moments are made possible because guests who drive themselves to the Kingdom can’t simply walk up to Magic Kingdom from the parking lot; instead, they have to travel from the Transportation and Ticket Center (TTC), using Disney transportation as they arrive at the Park’s entrance.

Today we’ll be delving into why Disney took this approach to the Magic Kingdom and how the TTC has evolved since 1971.

To understand why the Transportation and Ticket Center exists at Walt Disney World, we have to first travel about 2,500 miles across the country to Disneyland. When Walt Disney first chose the location of his theme park, the land he purchased was surrounded by nothing but Anaheim orange groves. Disney bought as much land as he could afford for his park and its parking lots, but it would prove to be nowhere enough. (Disneyland has, in the current era, built parking structures to maximize space for guests.)

Upon Disneyland’s 1955 opening, the park was a massive success. However, an unforeseen side effect of the Happiest Place on Earth’s smashing debut was the fact that the land around the park was snapped up quickly by various business interests. Over the course of Disneyland’s first decade, the park became increasingly surrounded by hotels, motels, stores, and other tourist traps, much to Walt’s consternation. The development bothered Walt so much that buying enough land to completely control everything around Disney’s development was a core part of the Florida Project/E.P.C.O.T. from the start of planning.

While the years between Walt Disney’s 1966 death and the 1971 opening of Walt Disney World saw many changes to the Florida plan, the idea of Disney having as much control of possible over the land they owned remained, which led directly to the creation of the Transportation and Ticket Center.

The TTC, situated more than a mile away from the Magic Kingdom, allows Disney to control exactly how guests arrive at the park. Visitors arriving by car park at the TTC, purchase tickets if they need, then board either a monorail or ferry boat for their journey to the park. With this structure, Imagineers were able to set everything from the sight-lines guests saw to the soundtrack they heard, crafting a movie-like experience that left the real world behind. Plus, the distance between the park and its parking lots meant that the Magic Kingdom could be surrounded by themed hotels, beautifully-pruned foliage, and the aforementioned lagoon, as opposed to miles and miles of asphalt parking lots.

Given the importance of the TTC, it should come as no surprise that it it was one of the most important places in Walt Disney World upon the Vacation Kingdom’s opening in October of 1971. For the first several years Disney World’s existence, the TTC was the central artery of the resort’s transportation, with nearly every guest (outside of those staying at the Polynesian Village or Contemporary Resorts, which had their own dedicated monorail route stops) who passed the Magic Kingdom’s turnstiles beginning and ending their Disney day at the TTC.

The Transportation and Ticket Center became even more important to Walt Disney World’s infrastructure with the 1982 opening of EPCOT Center. While the new park did have its own parking lot, the Walt Disney World Monorail was extended, with a newly constructed line connecting EPCOT with the TTC. This not only linked EPCOT to Magic Kingdom and its greater resort area, it also gave EPCOT its iconic in-park monorail.

Transportation at Walt Disney World began to change in the late 1980s, as the Walt Disney Company (under the then-new leadership of Michael Eisner and Frank Wells) began rapidly expanding the number of resorts on property. While guests driving to Magic Kingdom were still required to use the TTC, eventually the ever-expanding number of guests staying at these new hotels were able to travel directly to the Magic Kingdom via a newly contracted bus loop close to the parks entrance plaza, likely much to the chagrin of some of the area’s original designers. 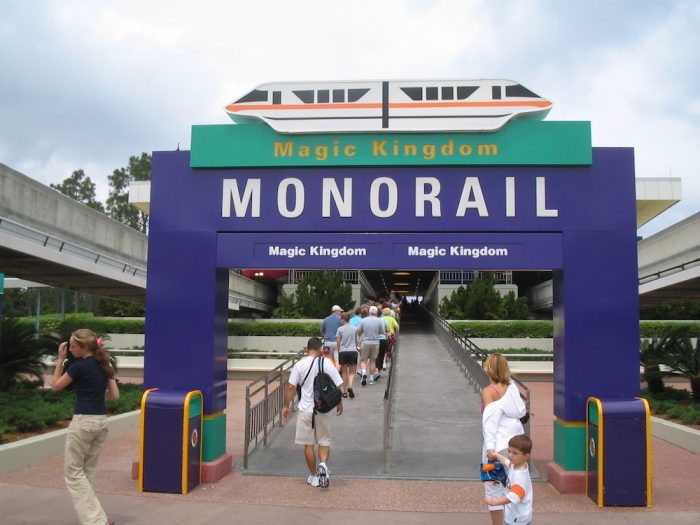 While the TTC – which last received a major refurbishment in the 1990s – may not be quite as important to Walt Disney World’s transportation apparatus as it used to be, thanks to the aforementioned bus loops as well as new modes of transportation like the Skyliner, it’s still a heavily trafficked part of Disney World and an iconic experience for visitors.

In fact, as Uber, Lyft, and other ride-sharing services have become a big part of many guests’ Disney World experiences, the TTC has arguably become a more important part of the resort than it’s been in decades as it serves as the drop off point for those services when delivering guests to the Magic Kingdom. This has caused consternation for some guests, who question why a ride share drop off point can’t be built near the bus loop, eliminating the TTC from their trip entirely. But for fans of Disney-provided transportation, the TTC and its monorails will always remain a must-do Disney experience.

Turn the pages of Disney history at the links below!

What are your thoughts on the Transportation and Ticket Center? Do you wish it still served as Walt Disney World’s mains transit hub, or do you feel the era of ride-sharing should lead to a total rethink of how guests arrive at the Magic Kingdom? Let us know in the comments below.

10 Replies to “Why Magic Kingdom Doesn’t Have a Parking Lot: The History of the TTC”