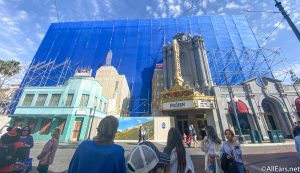 Posted on February 19, 2020 by Austin Lang
We're bringing you the latest construction updates from Disneyland and Disney California Adventure!
No Comments 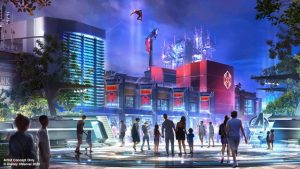 Posted on February 11, 2020 by Austin Lang
Avengers Campus is starting to take shape, plus a lot more on this edition of Disneyland Construction Updates!
No Comments Posted on August 12, 2016 by Laura Gilbreath
Following the success of the new Frozen - Live at the Hyperion Theater show, and the corresponding demand for seats, Disney was quick to introduce three dining packages which offer premium viewing experiences. At various price points. Blogger Laura Gilbreath reviews the middle-priced option, the Frozen Pre-Show Plus Lunch Package, which includes a four-course lunch at the Carthay Circle Restaurant. It is $99 for adults and $79 for kids 3-9, plus tax and gratuity. (Annual Passholder discounts apply.)
No Comments Posted on August 12, 2016 by Laura Gilbreath
AllEars.Net's Laura Gilbreath and her husband Lee Zimmerman weent to Disneyland on Friday, August 5. Laura's shares some thoughts, observations, etc. on the day.
No Comments A Trip to Disneyland in Summerrrrrrr

Posted on July 23, 2016 by Laura Gilbreath
Lee and I, along with our friends Matt and Kristin, spent a summer Saturday at Disneyland. Lee and I, of course, are frequent visitors, but Matt and Kristin are not, so we wanted to get in as many of the newer/favorite attractions as possible. I was the only one who had seen the new Frozen … Continue reading "A Trip to Disneyland in Summerrrrrrr"
One Comment Review: “Frozen–Live at the Hyperion” Posted on May 27, 2016 by Laura Gilbreath
"Frozen - Live at the Hyperion," a new theatrical adaptation based on Disney's animated blockbuster film, opens May 27 at the Hyperion Theater at Disney California Adventure Park in Southern California. This new theatrical interpretation for the stage immerses audiences in the beloved world of Frozen and takes audiences on the heartwarming journey of Anna and Elsa, with all of the excitement of live theater. Under the direction of Tony Award-nominated Director Liesl Tommy, the show features elaborate costumes and sets, stunning special effects, and show-stopping production numbers. An exceptionally large production, the show features an opening cast and crew of more than 200, six full musical numbers and a 2,200 square foot video wall which combine for an unforgettable theatrical experience.
No Comments