Star Wars: Galactic Starcruiser – Everything You Need to Know

Scroll to the bottom of this page to see departure dates!

Star Wars: Galactic Starcruiser, more commonly known as the Star Wars hotel, is a two-night, fully-immersive “cruise” adventure. It is the most highly-themed Resort that Disney has ever built, and it promises to transport guests into the world of Star Wars for an experience like no other.

Once you pass through the entrance and board your “launch pod”, all mention of Star Wars as a film stops. Instead, you’re a guest on The Halcyon, flagship of the Chandrila Star Line, as you embark on a cruise across a galaxy far, far away. Highly advanced screens create the illusion that you’re traveling past iconic locations in the galaxy on your approach to your port of call, Batuu.

Where is the Star Wars Hotel Located?

The Galactic Starcruiser is in Walt Disney World in central Florida. More specifically, it is adjacent to Disney’s Hollywood Studios.

How Much Does the Galactic Starcruiser Cost?

Prices for the Star Wars hotel start at $4,809 for a party of two. Disney has provided the following sample pricing. Click to enlarge the graphic. All pricing is for a 2-night stay.

What is Included With a Star Wars Hotel Reservation?

With a reservation on the Galactic Starcruiser, guests receive:

What is NOT Included in a Star Wars Hotel Reservation?

For an extra cost, guests may add to their experience.

When Can Guests Arrive?

Guests of Galactic Starcruiser should plan to arrive in the terminal between 1PM and 4PM. Guests will not be able to board before 1PM.

Upon checking in at the Galactic Starcruiser Terminal, guests will board a launch pod to travel to the Halcyon.

How do Guests Get to Galactic Starcruiser?

If you’re driving to the ship, Disney provides this address:

Note: Valet parking is included with your voyage on board the Halcyon.

If you are staying at a Disney Resort hotel either before or after your visit to the Halcyon, complimentary Disney transportation will be provided to and/or from your Resort for your arrival and/or departure from Galactic Starcruiser.

Do Guests at the Star Wars Hotel Need Park Tickets?

Guests aboard Galactic Starcruiser will not need to purchase an admission ticket to Hollywood Studios in order to experience the “port day” in Galaxy’s Edge. This excursion is included in the price of your two-day voyage aboard the Halcyon.

Travel to and from Galaxy’s Edge aboard “Transport Shuttles” will run continuously on your “port” day until 4PM.

What is a Databand?

The Databand will require guests to enable location services, Bluetooth technology, and other permissions in order to fully interact with the adventure onboard. Read more about this from Disney here.

Your earth-based My Disney Experience app will still be useful during your voyage on Galactic Starcruiser. Disney says you may:

What is the Itinerary for the Star Wars Galactic Starcruiser?

The Play Disney Parks app will activate onboard Galactic Starcruiser as a Datapad, just as it does in Galaxy’s Edge. Your Datapad will host your personal itinerary, but it will also receive communications “from the crew and others you meet along the way.”

Disney encourages guests of the Halcyon to download the Play Disney Parks app ahead of their arrivals.

Unlike the guest experience in the rest of Walt Disney World, onboard the Halcyon guests are encouraged (but not required) to wear thematically appropriate costumes.

Disney recommends purchasing costumes ahead of time on shopDisney or stopping by the ship’s boutique, The Chandrila Collection, to buy a costume onboard. You could also wear costumes or pieces you’ve purchased elsewhere or made yourself.

Each cabin on the ship can sleep four guests: two on a king-sized bed and two on a pair of bunks. A fifth guest may be accommodated on a pull-down Murphy-style bed.

Cabins will have one window looking out into “space” at a galaxy far, far away. Simulated views will include recognizable ships and expansive vistas of stars and planets.

The Galaxy Class Suite is a one-bedroom suite with a separate living area that features integrated furniture. Additions included in the Galaxy Class Suite are a double-vanity bathroom, a bar area, an additional window with views of space, and “a few extra Star Wars surprises.”

The Sublight Lounge is a bar where guests can enjoy drinks alongside Twi’leks, Droids, and other galactic characters. Guests can play a game of holographic Sabacc while they sip on some otherworldly concoctions.

The Crown of Corellia Dining Room

On your first night aboard the sip, the Crown of Corellia Dining Room is an immersive, Table Service supper club that offers live entertainment and “a special musical appearance by a galactic superstar.”

On the second night of your cruise, the Dining Room features The Taste Around the Galaxy, a multi-course menu inspired by iconic geography and locations from the Star Wars franchise. The meal will include shared appetizers, individual entrees, and a plated dessert.

Additionally, the Crown of Corellia offers a add-on experience at the Captain’s Table. This table will be situated in the center of the restaurant and feature additional courses. The price of the Captain’s Table add-on is $30 (plus tax) per person for one night.

Note: There are two seatings for dinner. You will have a choice between them when you reserve your spot onboard (depending on availability).

The Crown of Corellia will service breakfast and lunch as well. Disney says guests will “help yourself” from hot and cold small plates for breakfast and sandwiches, soups, flatbreads, and other small bites for lunch. Beverages will, of course, be available at each meal as well. They include the famous Blue Milk!

Note: You may be seated with other parties during your Table Service dining experiences at the Crown of Corellia.

Your voyage includes a Quick Service meal during your trip to Black Spire Outpost. When eating on Batuu, the offered option is Docking Bay 7 Food & Cargo, however Disney also notes “other select locations” at Hollywood Studios will also be included.

This boutique located onboard the Galactic Starcruiser is the place to purchase costumes and galactically-appropriate attire should you wish to dress the part during your voyage.

Guests of Starcruiser who choose to build an astromech droid at Galaxy’s Edge’s Droid Depot are allowed to operate their droids onboard the ship. They may even choose to race their droids in a droid racing competition!

Guests will need to register for this event up to 60 days before their voyage. See Cast Members onboard to inquire about registration when you board.

The Atrium is the main lobby, where the crew and passengers can gather. In addition to providing ample seating, it also features frequent appearances from characters, and will serve as the main “stage” for the ongoing story.

The Bridge is where the ship’s navigation and defense systems are managed. Guests can operate these systems under the crew’s guidance and may be called to battle stations during an attack by the First Order. 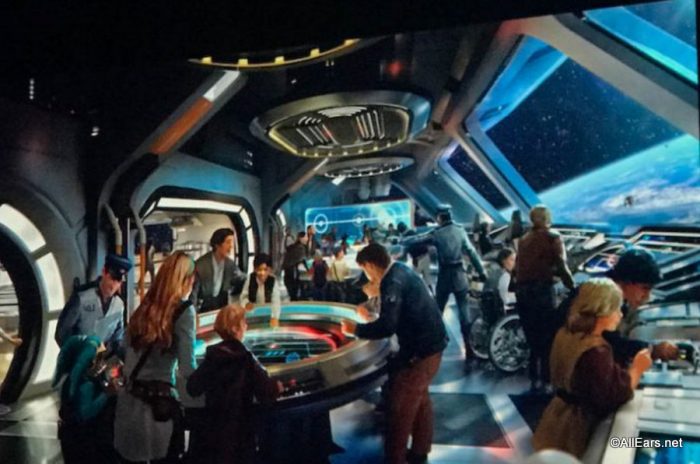 The Engineering Room is a children’s play area, themed to the ship’s engine room. Younger guests can crawl around and help perform maintenance on the ship’s vital systems.

Lightsaber Training is a recreational activity where guests can practice deflecting blaster bolts with their own training saber. As they work, they might even discover a connection to The Force.

Click here to see how “real” lightsabers are coming to Galactic Starcruiser!

The ship is also expected to include several hidden areas, which are only accessible to guests on “secret missions”.

The main draw of the Galactic Starcruiser is the story. You are a guest on board the Halcyon who finds yourself drawn into the conflict between the Resistance and the First Order. Disney promises that each guest will experience their own unique tale and that the choices they make will carry over throughout their trip.

This is a step beyond the existing Star Wars: Datapad you may have used in the Play Disney Parks app, as your physical actions in the resort and park will affect your standing, and Cast Members will respond to your choices. You could end up in the brig for tampering with the ship’s controls, or make an alliance with major players in the Galaxy at the Sublight Lounge.

Disney purports that guests will encounter familiar characters in new ways — even helping and joining them on missions that can impact their adventures the next day as well.

During their excursion to Batuu, guests of the Halcyon will have one-time guaranteed access to experience Millennium Falcon: Smugglers Run and Rise of the Resistance.