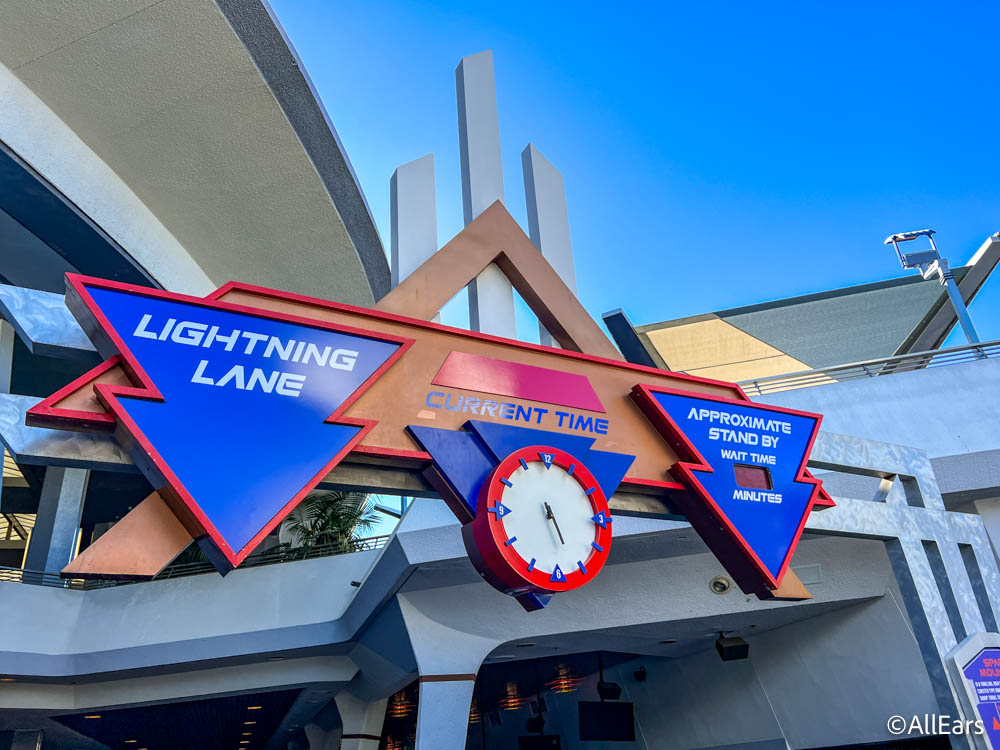 Space Mountain is a thrilling high speed rollercoaster ride in the dark. On this “out-of-this-world” attraction, an exhilarating space-age soundtrack plays while the space vehicles twist and turn as they hurtle past stars and planets on a tour of the galaxy.

Upon entering the building guests find themselves in the corridors of Space Station 77, where a long ramp leads down to the Space Port launch area. Suspended above the launch area is a futuristic-looking space shuttle, with the id number DL05.

Each space vehicle is composed of two cars, each with three rows that seat two people. Each passenger has their own lap bar. There’s a net bag on the seat in front for the storage of loose items.

After leaving the Space Port the vehicle proceeds up a ramp and into a light tunnel that appears to be spinning – this effect can be a bit disorienting. Then the vehicle enters the darkness of “space,” and the music builds as the launch commander counts down to zero.

Once the vehicle crests the final hill it starts down and continues down in a series of turns and dips, with one very short drop. After the single left turn there’s an explosion of light (Smile for the camera!) and the vehicle comes to a sudden stop before proceeding slowly back to the Space Port.

During Halloween Time, Space Mountain is transformed into Space Mountain: Ghost Galaxy. Screens and projections within the attraction feature “Space Ghost” images that might be frightening to some riders. There’s also a different and much more suspenseful soundtrack.

Lightning Lane access for Space Mountain is available with the purchase of Genie+.

When the rope drops at park opening, most guests race off to either Space Mountain in Tomorrowland or the Indiana Jones Adventure in Adventureland. Lines build quickly.

Space Mountain is a fast and smooth roller coaster, with plenty of high-G turns, but no inversions or large drops. The ride is about two minutes long. Guests should be in good health and free from high blood pressure, heart, back, or neck problems, motion sickness, or other conditions that could be aggravated by this adventure. Expectant mothers should not ride.

Space Mountain has a height requirement of 40″.

ECV or wheelchair users enter the attraction at the exit area and go left through the gate. You will be directed to a separate loading area, then transfer into the ride vehicle.

At the exit to Space Mountain guests have the opportunity to view and purchase the photo that was taken of them while on the ride.

The closest restroom is at the exit of Space Mountain, opposite the photo counter.

This attraction combines two elements that a lot of kids find very scary — it’s a roller coaster, and it’s in the dark.

There are no Disney characters in this part of Tomorrowland. Redd Rockett’s Pizza Port – offering pizza, pasta, and salads, is next to the entrance to Space Mountain.

Space Mountain reopened in July 2005 after an almost two-year rehab. Though the track layout is the same, the rocket vehicles are new and the ride is faster, smoother, and darker.

Astronaut Neil Armstrong was a special guest at the reopening ceremony.

During Season of the Force, Space Mountain received a Star Wars overlay and became Hyperspace Mountain. Riders found themselves in the middle of a space battle between the Resistance and the First Order. The new soundtrack, featuring many of the familiar Star Wars themes, added to the experience.

The Mercury astronauts participated in the original grand opening ceremonies in 1977.

The current soundtrack was composed by Michael Giacchino (composer for The Incredibles).

There are 42 speakers on each vehicle.