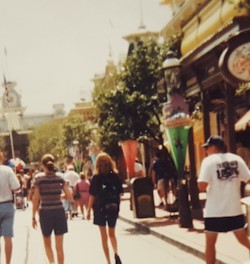 Main Street USA! I was going through older photos and this one came from a friend of mine. She took her mom, the woman in the red shirt and hat on the scooter, to Walt Disney World and splurged on the Grand Floridian.  She also got her mom the scooter and worried if her mom would have a good time. Not only did Julie have a wonderful time, Suzanne said Julie became a pro on that scooter, shooting ahead calling back, “I’ll meet you!”

It became a wonderful memory; Suzanne said it was like when the Golden Girls went to Disney World if Dorothy listened to Sophia about going inside the parks for the whole trip.

We’re going to stick with the 90s and switch parks. I kind of mentioned this above. It’s a good way to end the month, right, Friends?

Do you know? Do you have a guess? Send in your answer before the end of the day on Thursday, January 30th, by clicking on the blue box below. Please do not post your answers on this blog post.