There is a special kind of nostalgic charm to Disneyland, one that is hard to replicate in any other Disney Park around the globe.  That may be because Disneyland, the original Disney Park, was the only one that Walt Disney ever saw to completion.

While he dreamt and planned the infamous ‘Florida Project’ that would eventually become Walt Disney World, Walt passed away in 1966, five years before Magic Kingdom first opened its doors to guests.

So when you walk through Disneyland, you can feel the legacy Walt left behind in what has come to be called “Walt’s Park.” Many of the original attractions are still operating to this day, and countless details have remained for over sixty years. Many of these details stemmed from Walt’s own interests and passions.

So today we want to look at a few of Walt’s favorite things that still exist in Disneyland today.

When Disneyland first opened in 1955, Walt wanted to be near the action so he could watch guests as much as possible.  This led to a functioning apartment being built in Disneyland which Walt would stay in.

Walt had a lamp that sat in the window above the fire station that signaled to Cast Members and guests alike when Walt was in his apartment.  When he passed away, the light was turned off, but Cast Members decided they wanted to keep Walt’s legacy alive. Now when you are in Disneyland, take a look above the fire station in the window — you’ll see Walt’s lamp is now lit.

During the holidays the lamp is replaced with a small Christmas tree (of course with its lights on).

Walt was an avid train enthusiast his entire life. So much so that it became an iconic feature of Disneyland.

When Walt first moved to California to begin his career in film, he built a model railway in his backyard.  This model train can be seen today at Carolwood Barn at the Los Angeles Live Steamers Railroad Museum (located in Griffith Park).

When Walt began his plans for what would become Disneyland, there was no question that there needed to be a railroad in the park.  In fact, the Disneyland Railroad was one of the first attractions to be planned and implemented in the park.

Chili was one of Walt’s favorite foods. He was known to prefer simple dishes, and he even had his very own recipe for chili. 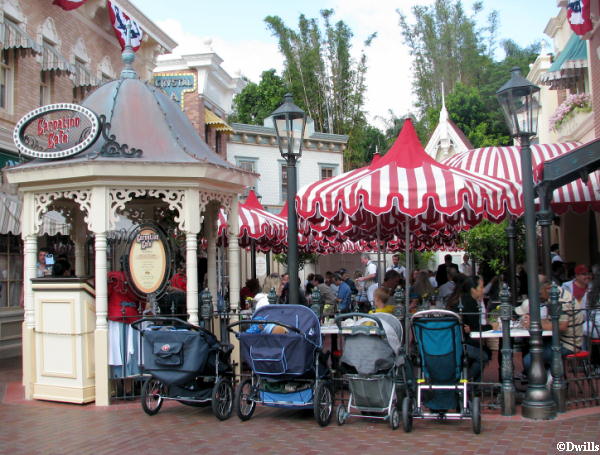 You can purchase “Walt’s Chili” at Carnation Cafe on Main Street. You can also get chili in a sourdough bread bowl at the Refreshment Corner on Main Street.

Disneyland was the answer to the growing success of Walt Disney Studios.  Walt’s first love and success in his professional life was film, and, of course, “It was all started by a mouse.” That’s why to this day you can watch some of Mickey’s earliest films in the Main Street Cinema on Main Street.

Next time you find yourself strolling down Main Street, walking toward Sleeping Beauty Castle, the Cinema will be on your right side.  There are benches for you to rest your feet, and it’s usually a great hidden gem to escape the crowds and heat.

Disneyland is filled with history! What is your favorite Disneyland detail? Let us know in the comments!