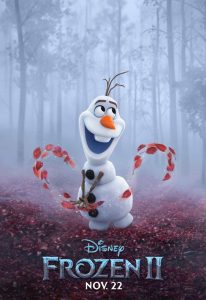 Into the Unknown: A Spoiler Free Review of Frozen 2!

Posted on November 22, 2019 by Molly McCormack
In case you’ve been living under an icy boulder, you know that the much anticipated film Frozen 2 comes out this weekend. I had the chance to see the movie early– for some reason multiple theaters around Orlando were playing it frequently starting November 21 at around 6PM. Did anyone else’s city do this? Why … Continue reading "Into the Unknown: A Spoiler Free Review of Frozen 2!"
No Comments

Posted on February 18, 2019 by Sarah Sands
The locations and dates have been announced for the upcoming North American Tour of Broadway's Musical Production of Frozen. See all the dates and locations here!
No Comments Posted on July 17, 2015 by AllEars
Beginning Friday (July 17), reservations can be made for the Ice Palace Boutique, a wintry salon at Disney's Hollywood Studios where young guests can get "Frozen"-themed makeovers. The Ice Palace Boutique will be open July 26 through Sept. 7 as part of the Frozen Summer Fun event.
No Comments Posted on November 6, 2014 by AllEars
Think kids are tiring of Disney’s animated hit movie “Frozen” a year after its release? Think again. Disney Consumer Products just announced that it has sold more than 3 million Elsa and Anna role-play dresses at Disney Store and mass retailers in North America. To anyone who celebrated Halloween with children, the popularity of the … Continue reading "Frozen-themed experience coming to select malls in United States for holidays"
No Comments Where to find “Frozen”-themed backpacks

Posted on July 29, 2014 by AllEars
It’s that time again — the time when parents jam the aisles at discount and office-supply stores to purchase items off long lists of school supplies for their children for the upcoming school year. And if trying to find a very specific type of folder or notebook isn’t enough to send parents screaming, how about … Continue reading "Where to find “Frozen”-themed backpacks"
No Comments Posted on March 13, 2014 by AllEars
Disney's "Frozen" certainly has been in the news recently with its two Academy Awards for Best Animated Feature and Best Song for "Let It Go." Now, fans finally will be able to purchase the DVD, and there are more opportunities to enjoy Frozen-related attractions at Walt Disney World.
6 Comments Where to find ‘Frozen’ characters at Walt Disney World

Posted on November 26, 2013 by AllEars
Has Olaf, the wacky and lovable snowman, in "Frozen" melted your heart yet with his appearances in trailers for the upcoming film? The characters from Disney's "Frozen" already are being integrated into attractions at Walt Disney World. Here's where you can find the new animated film come to life:
6 Comments Posted on November 22, 2013 by AllEars
For many Disney Infinity fans, this weekend just might be more exciting than Black Friday. Don't expect to skip the lines, though, unless you pre-ordered the gaming merchandise being released soon. Several eagerly anticipated pieces are being released, including the first official Disney Princess character and several other popular female figures. Today, players can purchase Rapunzel from "Tangled" (a Wal-Mart exclusive) and Ralph from "Wreck-It Ralph" (a Best Buy exclusive). On Sunday, everyone's favorite computer-game glitch, Vanellope von Schweetz, will be released only at Target. And on Tuesday, the day before "Frozen" hits theaters, a toy pack with the movie's characters, Anna and Elsa, and two related power discs will be available in stores.
No Comments Posted on November 20, 2013 by AllEars
"Frozen" is Disney's adaptation of the Hans Christian Andersen fairy tale, "The Snow Queen." The original story was popular in its own right and has appeared in many works since it was first published in 1845. Blogger Kristin Ford reviews the new movie, set for release November 27.
3 Comments