Obviously, we’re going through tough times around the world. So maybe a bit of Disney humor?

Q. What did Captain Hook’s sidekick say to Peter?
A. Hello, it’s Smee!

Q. What happened the first time Mickey and Minnie saw each other?
A. It was glove at first sight!

Q. Why did Goofy wear two pairs of pants when he played golf?
A. He heard he might get a hole in one!

Q. Why is Cinderella so bad at soccer?
A. Because she’s always running away from the ball—not to mention, she has a pumpkin for a coach!

Q. How do you know it’s cold in Disney World?
A. Donald Duck is wearing pants!

And a piece of trivia:

Why do so many Disney characters wear gloves?

In the age of black and white cartoons, separating characters’ round-edge hands from their black bodies was hard. Gloves were an easy way to make their hands stand out. In fact, Walt Disney might have been the first to put gloves on his characters in The Opry House, starring Mickey Mouse

Besides keeping the animation simple, Walt Disney told his biographer, Bob Thomas, that the gloves exist for another reason: to humanize the mouse. “We didn’t want him to have mouse hands because he was supposed to be more human,” Disney told Thomas in 1957, according to the New York Times. “So we gave him gloves. Five fingers seemed like too much on such a little figure, so we took away one. That was just one less finger to animate.”

Let’s move on to the game. 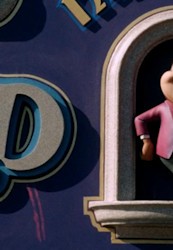 The old Mr.. Toad sign; I miss you, buddy. I think I told you Players that I road this with my young niece and convinced her I was really driving (to keep the magic). She griped at me for hours.

Hi, Team Hill! Yes, I do know Winnie the Pooh replaced Toad and has that reference to him in the ride. There’s that other Toad reference in the Magic Kingdom, but it makes me sad so let’s not talk about it.

Pooh used to have that Nemo sub carving in part of the play area, in honor of 20,000 Leagues Under the Sea replaced by Ariel’s play area. I don’t know if that’s still there. Carol Gregory? Think that’s the next mission?

We’re back in present day. Be careful when you identify the hand and glove in this thumbnail. Because we’re not right in front of the castle.

Do you know? Do you have a guess? Send in your answer before the end of the day on Thursday, March 26th, by clicking on the blue box below. Please do not post your answers on this blog post.

Everything Coming to Disney+ This April!