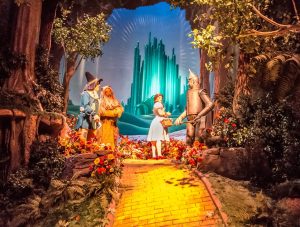 Posted on October 1, 2017 by Gary Cruise
Six decades ago Disneyland was brand new! The Disney Corporation had invested heavily in its construction and they were rumored to be overextended. The senior management team was constantly trying new ways to attract guests to the park and increase revenues. That big pile of debt had to be repaid! Fortunately, Disney Studios had several … Continue reading "The Disneyland Pancake Race"
No Comments King of the Wild Frontier

Posted on February 19, 2010 by Scott Thomas
I enjoyed a stop at the Trail’s End restaurant in Fort Wilderness for a hearty all-you-can-eat buffet. Before I left, I explored Crockett’s Tavern which is inside Trail’s End and is a small bar where you can enjoy some spirited drinks. Next to the bar is a wall of paraphernalia from the life of Davy … Continue reading "King of the Wild Frontier"
4 Comments