Scoring major points on an interactive ride during your Disney vacation is often the cherry on top of an incredible day. Not to mention all of the bragging rights! But if you’re not the one at the top of the leaderboard, don’t despair!

Buzz Lightyear’s Space Ranger Spin in Magic Kingdom’s Tomorrowland is a guest favorite, and if you’ve ridden it, you know Point Levels on this ride are a big deal.  Whether it’s your first ride or your fiftieth, you’re definitely shooting for “Galactic Hero”, the highest possible level of space ranger. Some riders reach the pinnacle every time, and chances are it’s because they know all the right targets to shoot. Point Levels on this ride are:

Ready to become a Galactic Hero? Let’s get started!

The first thing to remember when riding Buzz Lightyear is as simple as pulling the trigger…literally. Did you know you receive points every time you miss a target? If you actually ride the entire ride with the trigger down and miss everything, you will still end up a Space Scout. This is a great feature for little ones who might not be the best at aiming. Seeing that they made it on the board can be really special! As for you, you aren’t aiming for Space Scout; you have your eyes on something bigger. So find a target and keep on shooting. If you miss, you are still racking up points! So what targets should you aim for? I’m glad you asked.

So you’ve reached the first room and the game has begun! Keep in mind you’ll want to be the one in control of your vehicle, otherwise, you may not get the chance to shoot at the good stuff! Targets are everywhere, and it’s easy to want to shoot at all of them. Put your focus on the big red guy to your left. You are going to want to aim at the target on the inside of his left hand. This target is worth 100,000 points per hit! His arms will be moving back and forth, but don’t let that deter you from trying. Remember, keep your finger on the trigger; you’ll be getting points no matter what! Even if you only get 3 hits off of him that’s 300,000 points right off the bat!

If the big red robot proves to be a bit too difficult you’ll want to swing that vehicle around and go for the giant red claw as you are leaving the first room. This target will also give you 100,000 points. Not many guests think to swing their vehicle around as their focus is on the next destination.  With these two targets shelling out so many points, you could be halfway to Galactic Hero in the first room alone! You just have to know where to shoot.

As you reach the second room, your eyes will be drawn to the closer moving targets, but the volcano is where it’s at! Search for the highest target atop the volcano; this is probably the furthest target from your vehicle, but it’s worth 50,000 points, and it doesn’t move!

You’ll also want to keep an eye out for the monster that pops in and out the box. Your eye won’t be drawn to him because this guy doesn’t have a target. That’s because you can shoot him anywhere and receive 50,000 points. He doesn’t stay up for long, so you are going to need to be quick! Lastly, as you exit this monster-filled room, keep your head up and search for the spinning target. It’s up there pretty high, but this one is worth 25,000 points, which you won’t want to pass up!

Zurg will be sitting there waiting for you in his spaceship, but don’t get distracted by his presence! You’ll want to look for the target at the very bottom of his ship because this one will also give you a whopping 100,000 per hit and is probably the easiest of the 100,000 point targets.

Keep in mind the closer you get to it, the harder it is to aim your gun that low! When you reach the star tunnel, remember to keep your finger on that trigger as you’ll want to rack up those free points!

As you reach the final room, you’ll lose control of your vehicle as it automatically goes to the right to capture your photo. You’ll have the chance to hit a few extra targets in this area to gain some last minute points. Your best bet is shooting at the same target at the bottom of Zurg’s ship. This target is no longer worth 100,000, but you can get a solid 25,000 points from each hit.

Now your journey is complete! You’ve captured Zurg, but did you become a Galactic Hero? If you did, snap a picture! You can show this to a Cast Member who will grant you a Galactic Hero sticker to wear with pride during the rest of your day at Magic Kingdom.

You may have just saved the galaxy, but can you conquer the carnival games set up by a bunch of toys? It’s harder than it looks! Toy Story Mania opened in 2008, and the seasoned Galactic Heroes in for a surprise. These games are tricky, and often require the help of your riding partner to max your score. No point levels for this one, but you will want to be the best in your vehicle! Here’s how. 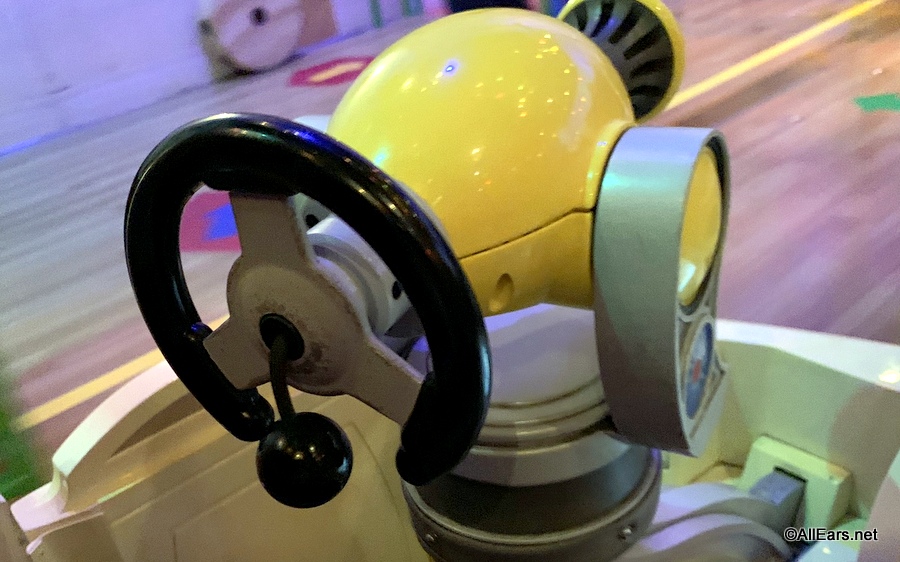 This game is all in the wrist. Try keeping the string in between your middle and index finger and flick your wrist consistently for an ultimate shootout. You’ll be tempted to use your full arm when things get tricky, but that will only slow you down. The first round is a practice round, but consider saving your energy! This one can get exhausting.

And the game begins! Your initial instinct will be to go for the obvious moving targets, but try to refrain from falling for this! The first thing you’ll want to do is search for the fox. Hitting the fox will release hens that earn higher points than any of the targets currently on the screen. Take down the two pigs that are above the fox, and a cat will appear worth 500 points. Repeat this process and the cat will increase in value all the way up to 2,000 points. If you are on the other side of the screen, take out the animals inside the barn including the mice. If you are successful, dozens of mice will appear worth 2,000. The side with the fox is your best bet for racking up points for the first game! 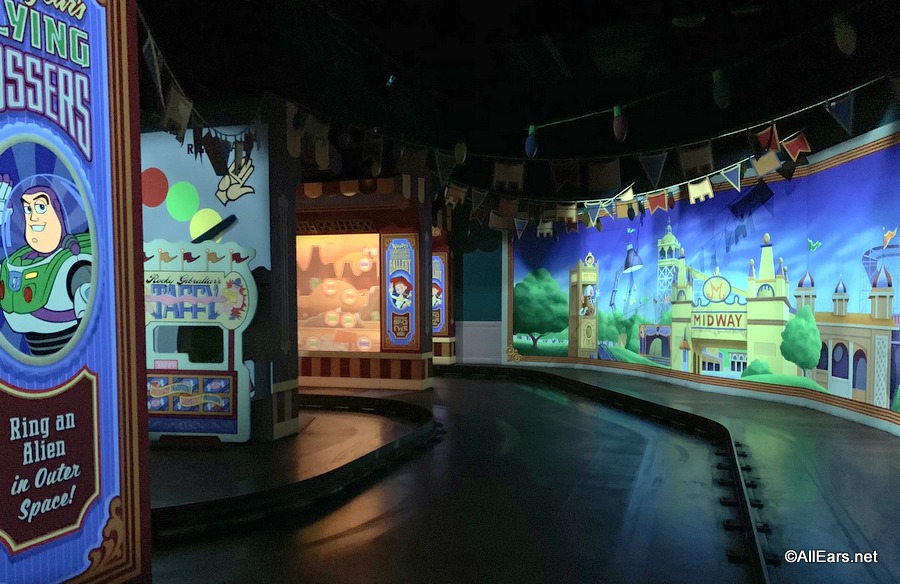 This one gets a little tricky as you’ll really need the help of your riding mate to snag those secret targets. You’ll want to release the eruption of balloons at the top of the volcano by shooting the lava three times. If you succeed, 500 point balloons will spew from the volcano. Meteors will shower down from the corners and if you hit them all a sea of balloons will come pouring down. Find the red balloon in the sea of balloons and hit it if you can – it’s worth 5,000. This one takes time, so the help of your riding partner is key! 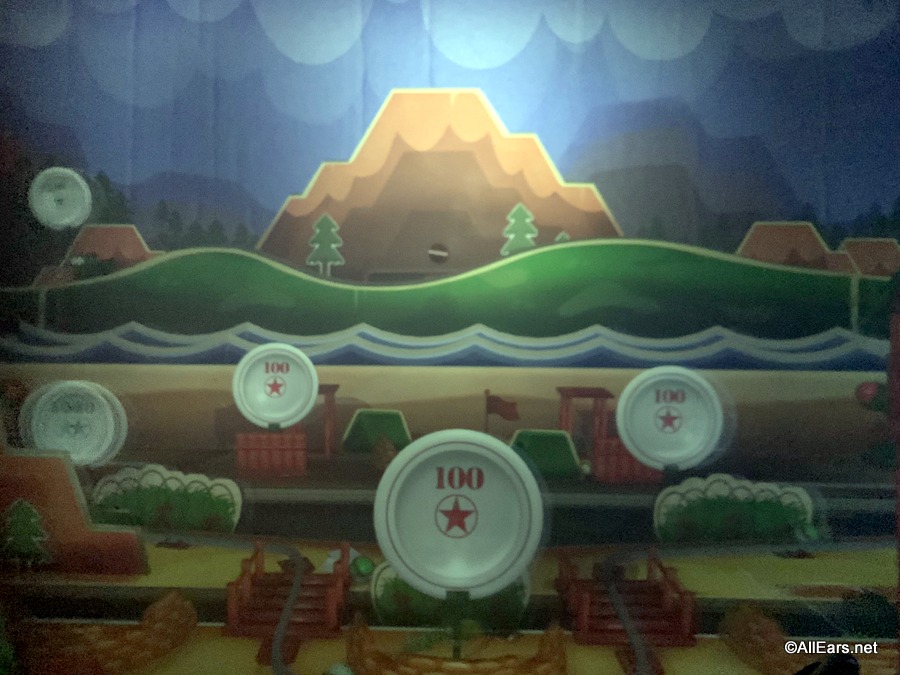 This one requires your riding partner as well, but it can be done solo if you are quick enough! This game has you smashing plates, but you’ll want to be on the lookout for the two 2,000 point plates that pop up quickly and suddenly disappear. If you and your partner manage to hit them, the mountain will turn around to reveal a tank that begins to shoot out plates worth 5,000 points! Eight 2,000 point plates will pop up throughout this one as well if you get the initial two. Remember, the key to maximizing your score is to not get distracted by the obvious targets!

Another one that requires your partner or some very quick shooting, you’ll be throwing rings around the aliens from Pizza Planet and aim for the ones in the center! The goal here is to get all of the green aliens in the center down into the rocket…but these guys pop back up quickly. If you succeed, the rocket will launch and a robot will appear. Aim for his mouth as each time it opens points rise from 100 up to 500, 1,0000 and finally 2,0000. Keep your eye out for the alien worth 5,000 that occasionally appears! You can find him near the top, but he won’t be there long!

If you remain quick and accurate during Woody’s Shooting Gallery, you can easily rack up 175,000 points in the final round alone!

Toy Story Mania is exhausting! Remember to bring a friend along with you and make sure they know all the tips and tricks that reveal the hidden targets. Part of the fun of this attraction is obtaining animation sequences that most guests don’t get to see! Be quick, accurate, and most importantly, have fun!

Have you used any of these tips and tricks on Disney’s interactive rides? Let us know in the comments!

PHOTOS: First Look at the UPDATED Haunted Mansion in Disneyland!